Arp 25/NGC 2276 is an interesting, many armed face on spiral. Arp put it in his category for spiral galaxies with one heavy arm. The most famous member of this category is M101. The galaxy is located in Cepheus. The distance is a bit vague. Redshift puts it at 110 million light-years. A single Tully Fisher measurement at NED says 120 million light years and a post at the HST website says 150 million light-years. Quite a difference. Arp\'s comment on this one under Arp 25\'s entry reads: \"See also 114. Tubular arm, straight at first, then bent. Secondary arm from straight portion.\" Obviously, this refers to the southern arm that is somewhat separated from the rest of the galaxy and points in the general direction of NGC 2300. It\'s hard to write about Arp 25 without including nearby NGC 2300. So hard in fact that Arp made a second entry for NGC 2276 to include NGC 2300. Arp 25 was discovered by August Winnecke on June 26, 1876. Hubble image of part of NGC 2276 including the arm is at http://upload.wikimedia.org/wikipedia/commons/2/25/NGC_2276_Hubble_WikiSky.jpg

Arp 114 consists of NGC 2276 (Arp 25) and NGC 2300 and is in his category for elliptical and elliptical-like galaxies close to and perturbing spirals. Here Arp\'s comment concerns only NGC 2276 and ignores NGC 2300! It reads: \"Spiral somewhat pec., may be perturbed. See No 25.\" While it is in a category assuming it is perturbed the comment says only it may be perturbed. For once I agree, it may be but that isn\'t all that certain. I see arguments either way. The big one that they aren\'t related is their redshift. By that measurement, NGC 2300 is some 24 million light-years closer than NGC 2276. But there are many non-redshift measurements of its distance that range from 101 to 134 million light-years and average out to about 115 million light-years. Then there\'s the above-mentioned 150 million light-year distance at the HST website. These would make them more likely to be true companions. But look at the redshift distances on the annotated image. They seem to fall into two groups. One that fits NGC 2276 at about 110 million light years and one that matches NGC 2300 much closer distance. But with a sample size of 2 and 3, this is far from deciding the issue!

The HST site argues strongly for interaction with this post: http://www.spacetelescope.org/images/opo9305a/ This shows a huge enveloping cloud of hot gas seen in in X-rays around NGC 2300. It extends to NGC 2276. One possible explanation is an interaction between the two. But it certainly isn\'t required for this to occur.

NED classes NGC 2276 as SAB(rs)c, the NGC Project says simply Sc I. NED says of NGC 2300 it is SA0^0^ while the NGC Project says simply that it is an elliptical. Few sources I found agree with the elliptical classification. Most consider it a S0 type galaxy as NED suggests. This because some structure is seen in the outer halo of the galaxy. I am puzzled by the strong red color I got. While I found few color images of NGC 2300 on the net, the few I did find have it as nearly white. It was discovered by Alphonse Borrelly in 1871. I can\'t pin down the exact date. 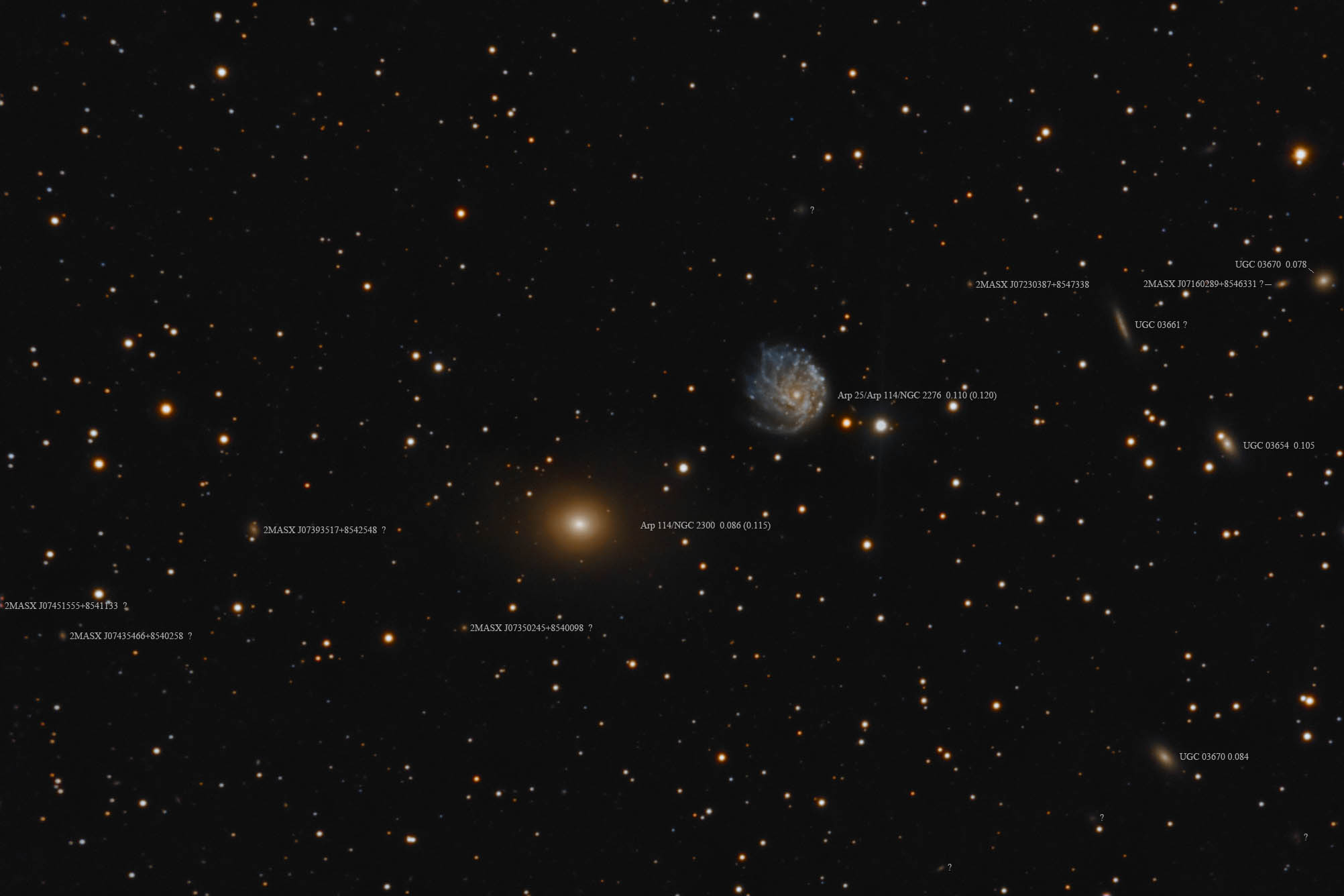 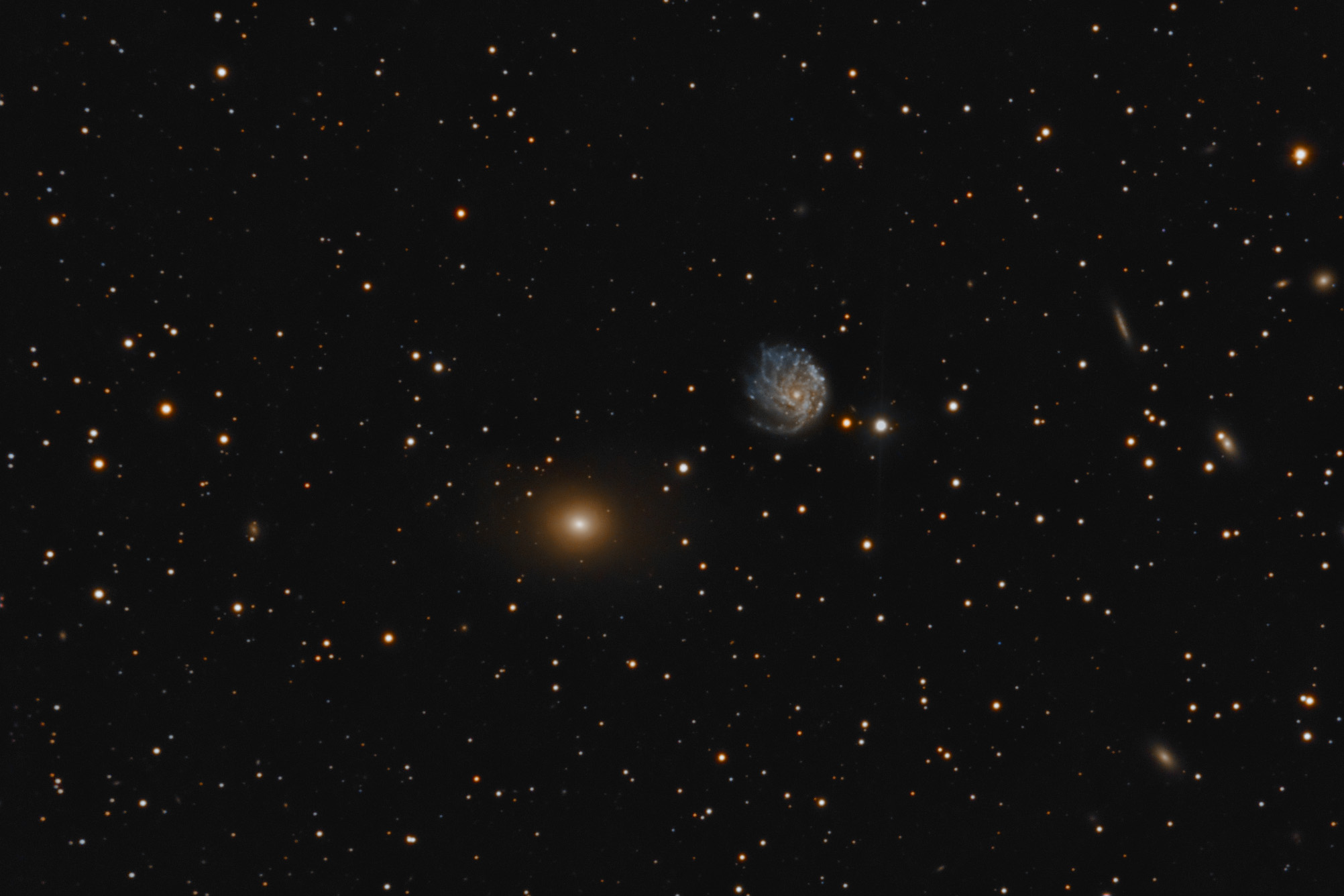