Arp 30 seems to be a pair of galaxies but that is not the case. The southern galaxy alone is the reason it made his catalog under his category: Spiral galaxies: One heavy arm. I\'d expect the heavy arm to be obvious but in this case, it doesn\'t seem all that obvious to me. I think it is the southern arm, likely due to the piece that appears almost broken off though that\'s more a contrast feature of my processing than a real feature. There is also a faint arm on the west side that extends out from the main galaxy and it appears a piece of arm is sticking out from behind the east side of the northern, foreground, galaxy. The latter appears to be an extension of the arm I first mentioned going south as the likely heavy arm. It seems to have brightened again when behind the companion. Arp\'s image appears to show a bright arm arc above the galaxy\'s core. It shows strong on his image, weakly on mine and not at all in the SDSS image. It appears to be very color dependent. So where is the \"heavy arm\"? I just don\'t know. Arp gave no clue that I\'ve found. It isn\'t the edge on galaxy that is trying to fake a heavy arm. Arp knew it to be a separate galaxy.

Both galaxies carry the NGC 6365 designation with the northern one being NGC 6365B (PGC 60171) and the southern NGC 6365A NED classes them as Sdm? and SBcd? with the later noted as a Seyfert 1 galaxy. This Seyfert classification could be due to interaction with its partner feeding its black hole. I don\'t have enough information to say for sure. There is even some debate which galaxy is in front of which. While there is an absorption line along the the southern galaxy\'s edge where it meets the northern one which could be caused by dust in the northern one and the apparent arm that comes out from behind the northern one, one paper cites an absorption feature in the northern galaxy that could be caused by a arm of the southern. I don\'t buy that however. The other features seem to strong to ignore. Red shift data puts them at 363 and 368 million light-years north to south. Another indication the northern is in front though their relative motions could easily differ enough to negate this. Likely they are really closer together than this would indicate as well. Still they can\'t be really close as neither appears distorted to any obvious degree. The only oddity is the heavy arm.

The NGC project catalogs the northern galaxy as NGC 6365 with the southern listed as UGC 10832. (Most other sources say it is both.) The northern one is UGC 10833 as that catalog lists the two separately. The NGC project classifies the northern galaxy the same as NED but leaves off the question mark. A note there indicates visually in a 17.5\" scope the southern member is extremely faint. This brightness difference seen visually may account for the project not considering the NGC number as covering both.

I found no papers indicating these two could be a connected system, nor do I see any tidal features that could be due to them even being all that close but Arp\'s comment on the pair is; \"Companion appears physically connected to flat-on spiral system.\" By saying \"appears\" he isn\'t saying it really is nor does he say the appearance isn\'t correct. He just leaves it as undecided. I\'ll say I see no evidence or even hint of any that they really are connected. The pair was discovered by Lewis Swift on August 15, 1884. I found no indication he realized it was two objects.

Not a lot going on in this image but I\'ve done an annotated version showing the quasars and distances to other galaxies in the image that I found data on. NGC 6365 was discovered by Lewis Swift on August 15, 1884. 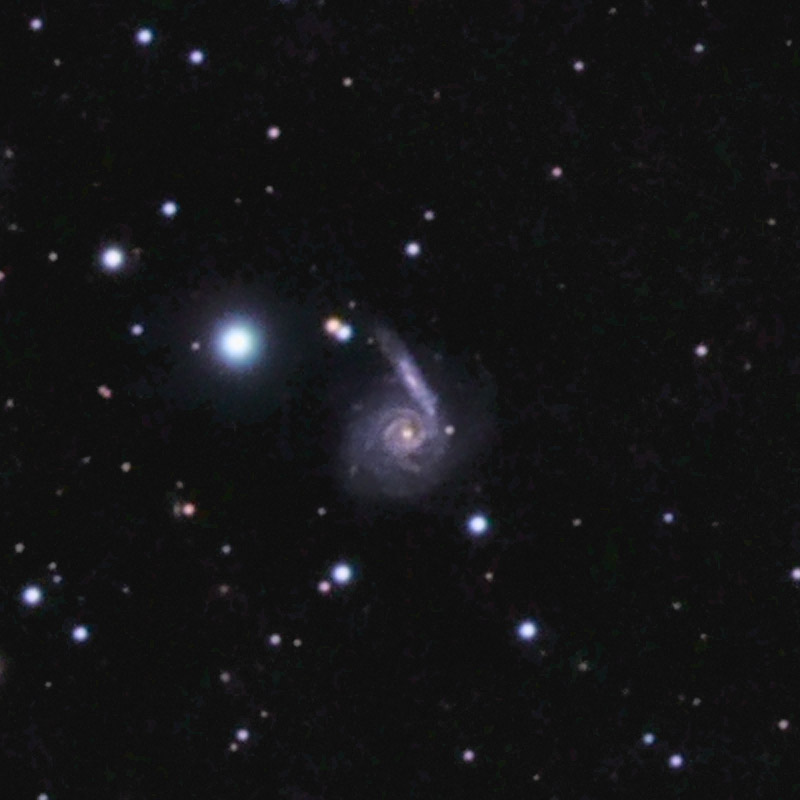 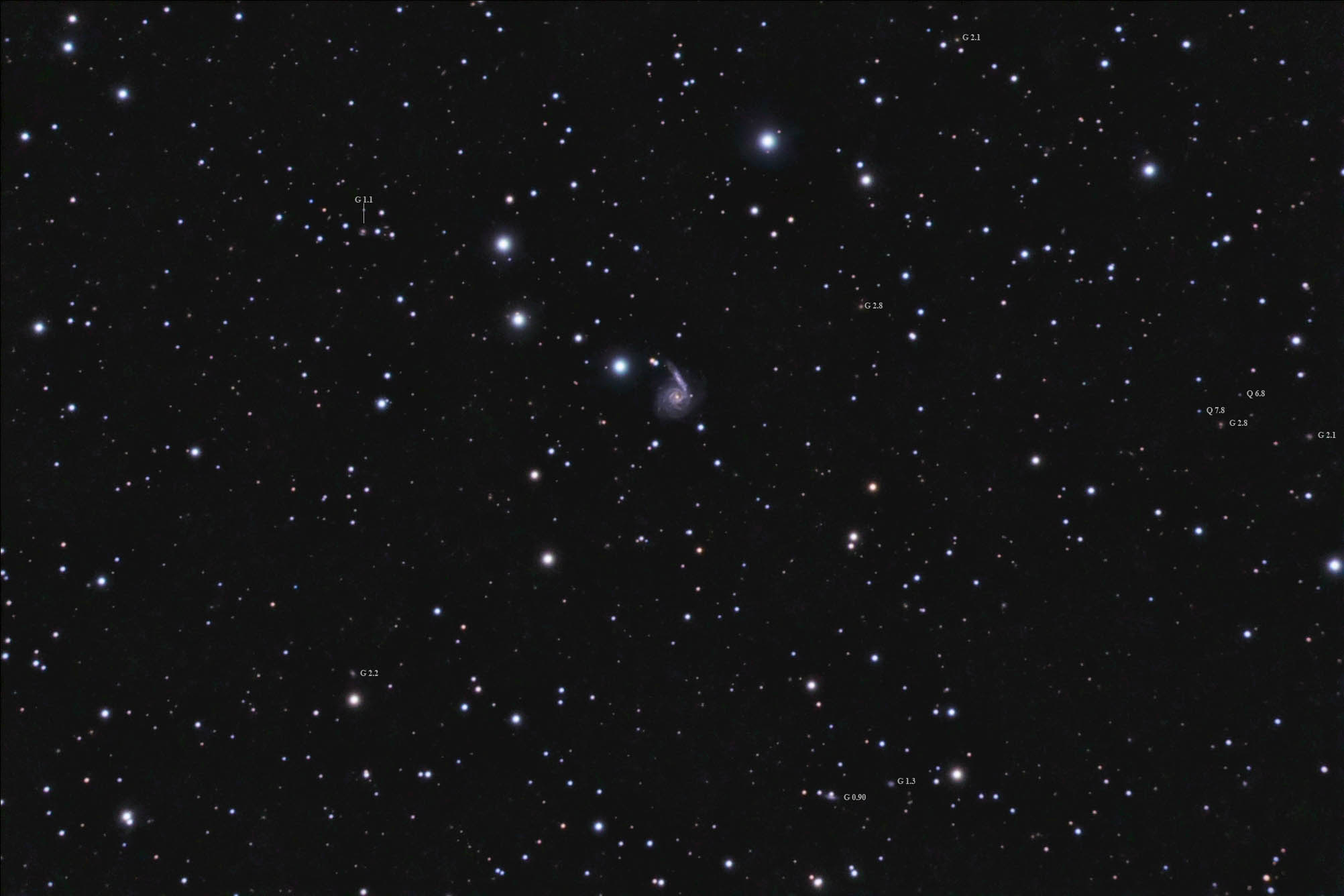 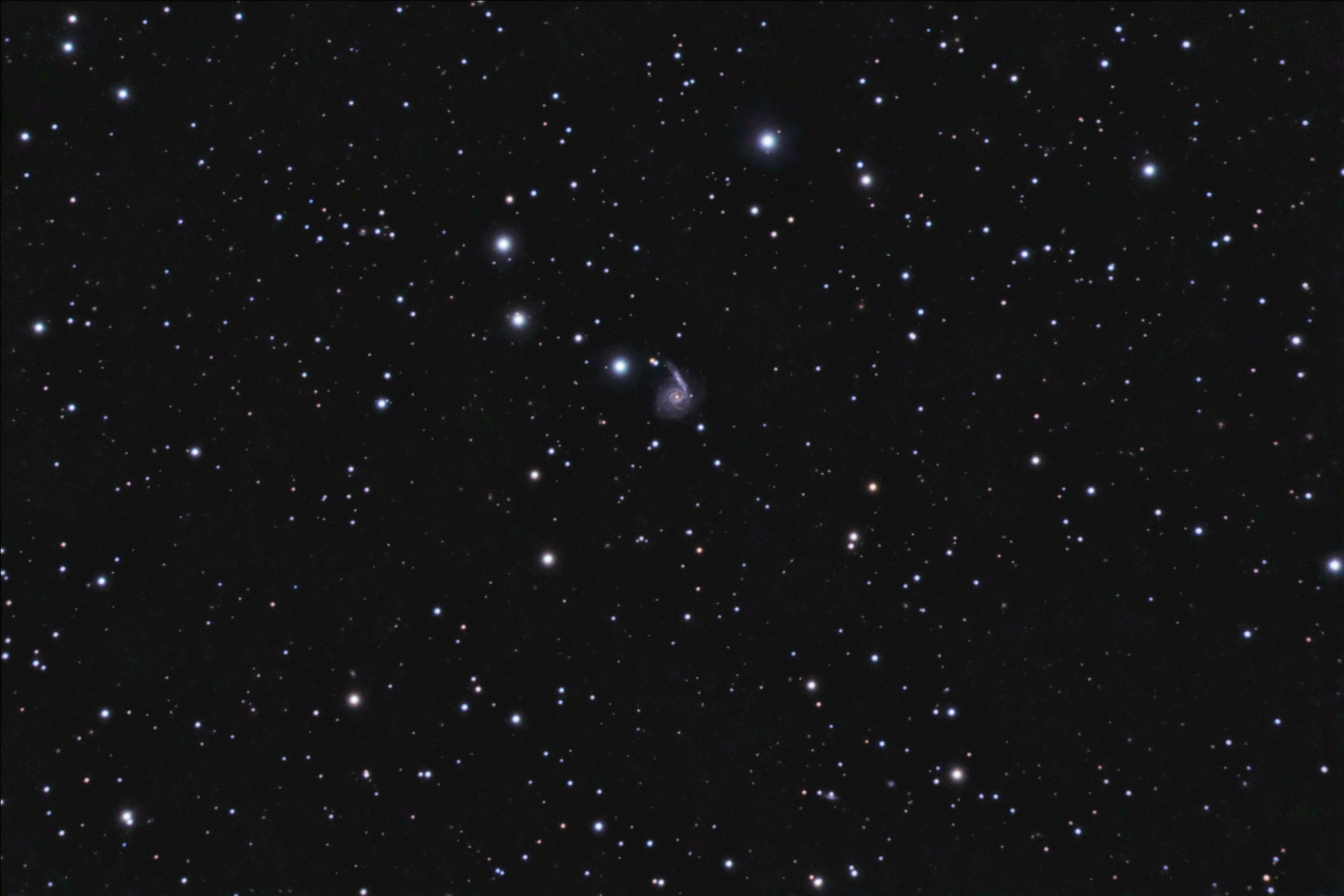 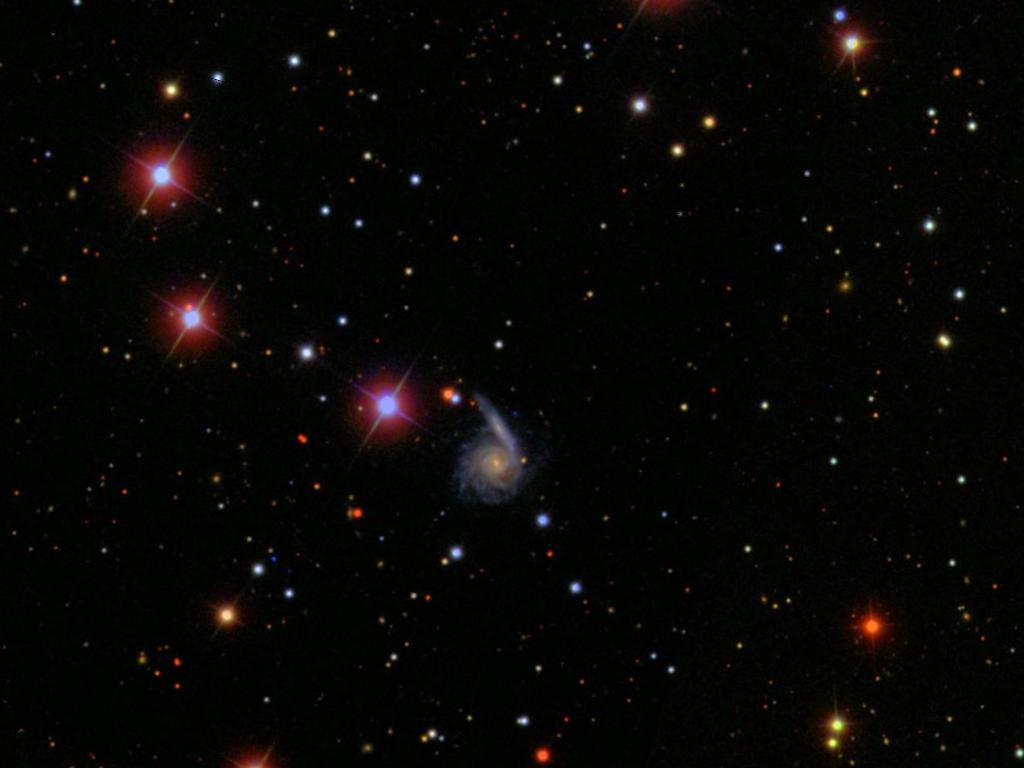