Another twofer deal on Arp Atlas entries. Most of them are completely unrelated objects that happen to be in the same field. Not this time. Arp 33 is part of Arp 326. Arp 326 is in Arp\'s category, Galaxy groups, chains of galaxies. The chain is located in Virgo right near the southwestern corner of Bootes. As can be seen in the annotated image this isn\'t a real chain but consists of galaxies of at least 2 different groups. Since redshift data is available for only 3 of the 7 galaxies Kanipe and Webb consider part of the chain its hard to determine what is really going on here. The chain members, as defined by Kanipe and Webb are (from north to south):

The classification of LEDA 214126 seems way off, Looks pretty much a spiral to me. For this reason, I left the classification off of the annotated image. UGC 08596 at 320 million light-years, classed as simply S and UGC 08623 classed as Sd at 340 million light-years. It is seen edge-on and is extremely flat. So flat it made the Flat Galaxy Catalog. It would appear these two are likely members of the same group as Arp 33/UGC 08613. Why Kanipe and Webb left out SDSS J133727.40+063044.4 I don\'t know. It is slightly brighter than MAPS-NGP O_559_0677872 just below it. While I identified MAPS-NGP O_559_0682366 NED had little on it. Just seemed big and bright enough to deserve mention. It looks like a nice face on spiral but NED omits a classification for it.

This brings us to Arp 33. While a member of the Arp 326 \"chain\" it made the Atlas under the Integral Sign category. It is a bit better integral sign than most of the others in that category, some of which require a lot of imagination to see as that math symbol. NED considers Arp 33 to also include LEDA 214126 which is also part of the Arp 326 group. Arp did include it in his image of Arp 33. The VV catalog considers UGC 08613 to be 4 galaxies; VV 6a through VV 6d. NED, however, says these are just parts of the galaxy. Something likely drew Arp 33 out into the integral shape. VV 6c and d seems a possibility. UGC 08596 shows a rather distorted arm on its east side and is also a possible cause of Arp 33\'s distorted shape.

NED and the Sloan survey identify a lot of other objects around Arp 33 that are similar to the VV objects. None of them are listed as being part of the galaxy, however. I\'ve identified a few of them. It would get too crowded to identify them all. How some are part of the galaxy and the rest not I haven\'t figured out.

The image contains three asteroids. West to east (right to left), they are (102745) 1999 VZ111 at magnitude 18.2, 2006 ST289 at a very optimistic estimated magnitude of 19.8 and one not yet known to the Minor Planet Center. I did it yet again. Imaged an asteroid but discovered it a year too late to do anything about it so it is still undiscovered. It was taken April 7, 2010 and not processed until now. I do have to clean up this backlog somehow.

The 200\" had sufficient field of view to do the entire group with its corrector lens in place. These online images are not made from the original plates but from first generation prints, Arp processed to bring out the detail he was interested in. 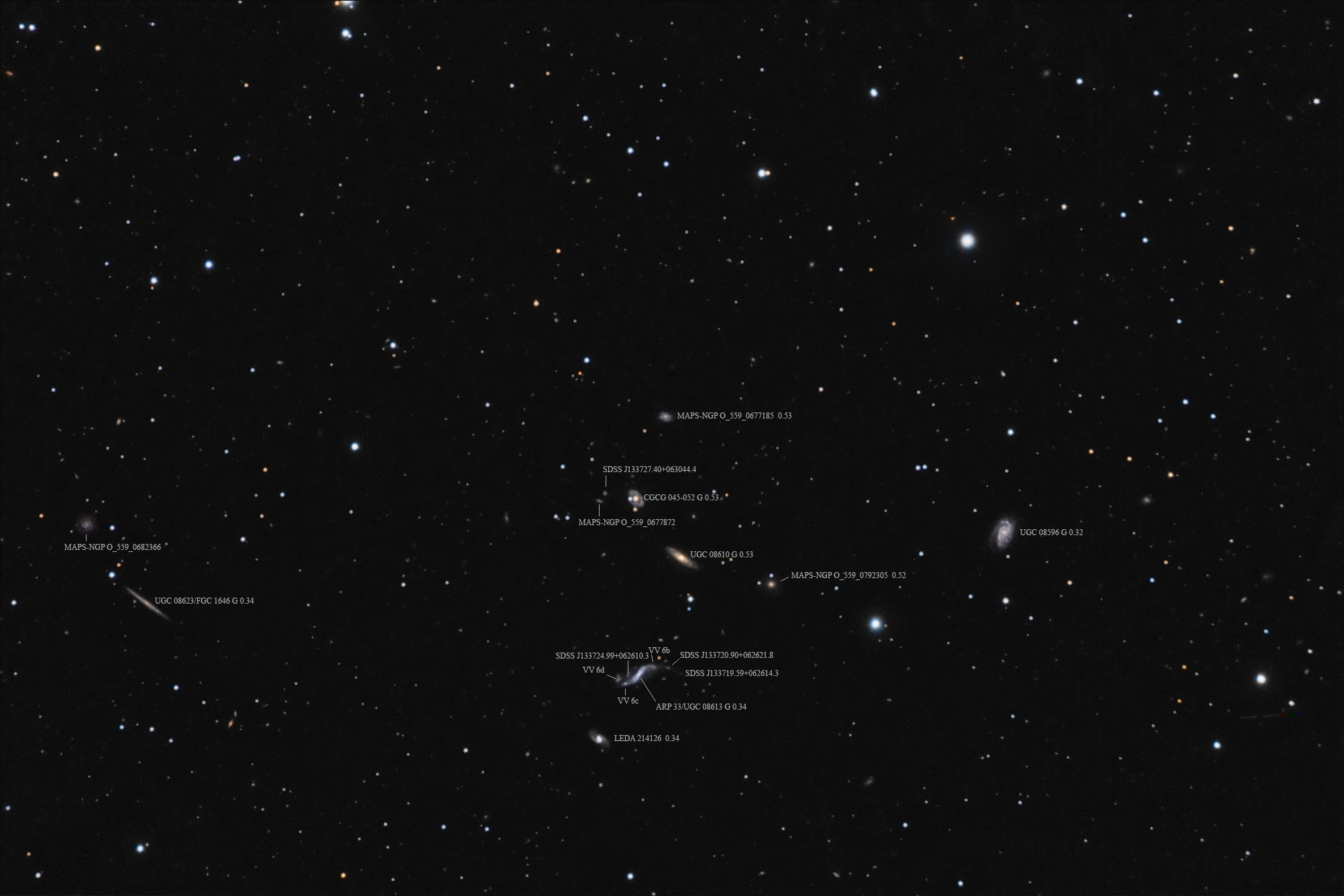 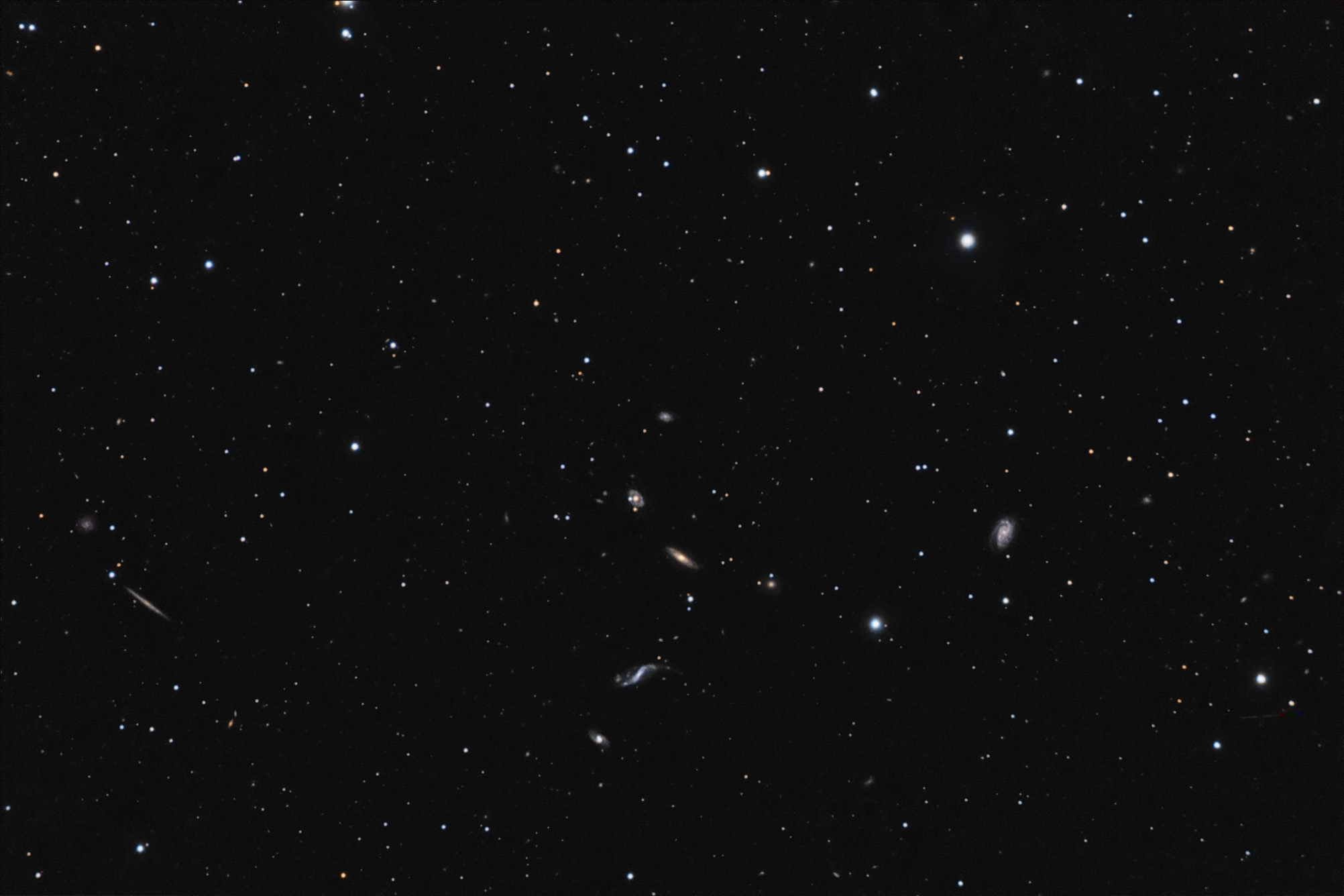 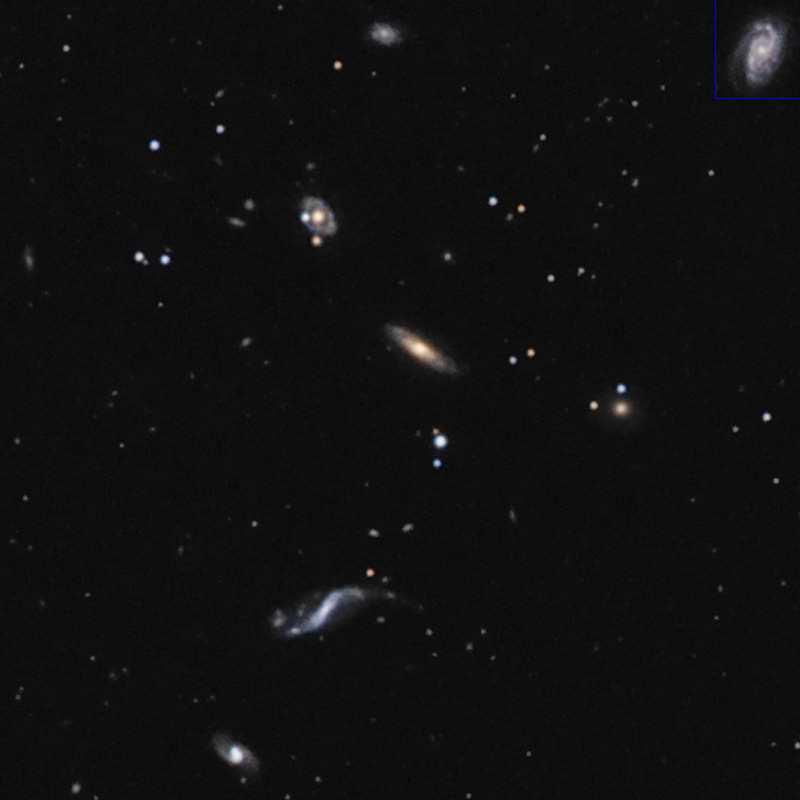