Arp 42/NGC 5829 and IC 4526 falls under Arp\'s category of spiral galaxies with a low surface brightness companion on an arm. Though in this case, I can\'t see that the companion is on a spiral arm nor that it is of low surface brightness. It seems rather bright in my image. The wrap around arm is very faint, however. The pair is located in the constellation of Bootes about... Houston we\'ve had a problem. Seems the red shift distance to NGC 5829, the nice spiral is 265 million light-years but the \"companion\" has a redshift distance of 620 million light-years according to NED. If correct, it isn\'t a companion at all but a distant background galaxy. Adding to the confusion is that both are members of the Hickson 73 galaxy group. This is described in a note at NED as: \"Hickson 73 - Group is actually formed by a bright low redshift galaxy - detected also at radio wavelengths - plus an accordant triplet at much higher redshift. Galaxy e is a background object.\" These 5 galaxies are noted on the annotated image with the prefix 73 and the Hickson letter followed by its redshift distance. Why the 6th blue galaxy at the distance as NGC 5829 isn\'t included in the group I don\'t know. It would seem worthy of inclusion. The galaxy was discovered by Édouard Stephan on May 11, 1882.

Arp\'s comment on this one indicates he likely didn\'t realize they weren\'t related when he commented: \"Faint bifurcated arm to companion, one faint arm on companion coiled in same direction as parent.\"

Near the northeastern member of the Hickson group is the center of a small galaxy cluster, MaxBCG J225.70820+23.36644 at 2.3 billion light-years. Its center is marked by a bright galaxy at the same distance. The cluster is listed as having 14 members with no diameter given. South of Arp 42 is another galaxy cluster marked by a bright galaxy. The cluster is [EAD2007] 349 with 28 members but no diameter. It\'s about 2.3 billion light-years distant estimated with the core galaxy at 2.2 billion light-years. At the very bottom of my image near the center is the center of Abell 2017 with a diameter of 24 minutes, a richness class of 1 (which someone else with need to interpret) and a distance of 1.5 billion light-years. Seems we have a lot of likely overlapping galaxy clusters here. At least 6 more are within a few minutes beyond the north and south edges of my image. But the one apparently obvious cluster I see about 2 minutes northeast of the galaxy at 1.6 billion light-years that is northeast of Arp 42 isn\'t listed at NED. There\'s a dozen or more in a 1 minute radius, none of which have a redshift distance though they are listed at NED, usually with a Sloan position.

To the upper right of Arp 42 is one Arp missed. Two very distant galaxies merge into one in my image except their different color gives them away. One is blue with a tail going down, the other rather red with a tail going to the right. Only the blue one has a redshift which puts it at 1.4 billion light-years. They look like two merging tadpoles. The blue galaxy is SDSS J150202.65+232518.8, the red one 2MASX J15020259+2325187. Now to convince Hubble to take a look, though it hasn\'t even looked at Arp 42 as yet.

I did it again. In the upper left corner is an asteroid trail. Unfortunately, it is another unknown at the Minor Planet Center. It was taken April 9, 2010 so too late for me to follow up on it. It will be unknown a while longer it appears. Edit: While this asteroid was unknown in 2010 it was discovered officially in 2011 and is now known as 2011 WP45 at an estimated magnitude of 20.1 when I took my image. I\'ve left it as unknown on the annotated image as it was unknown at the time the image was taken. 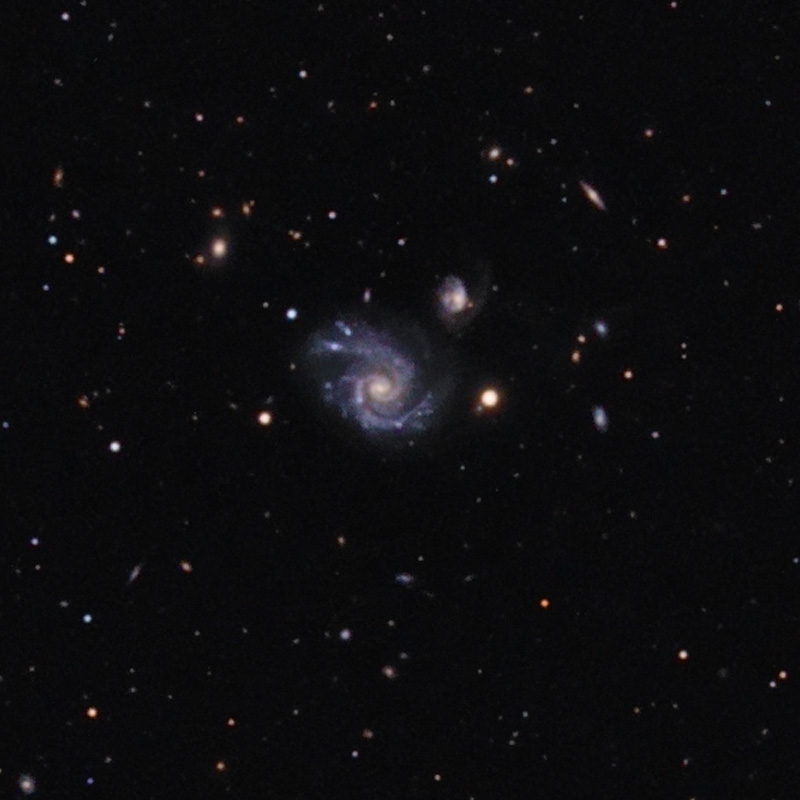 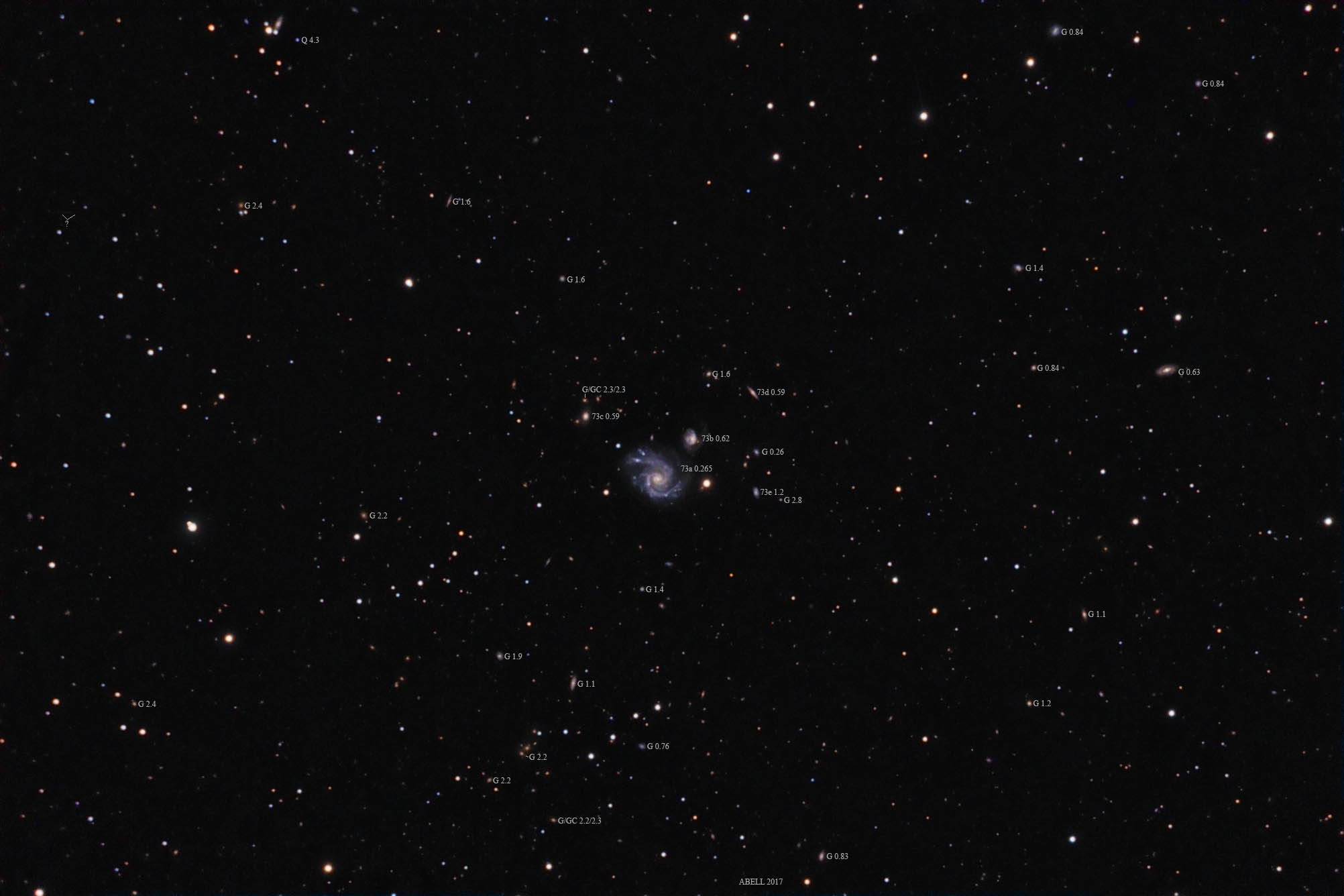 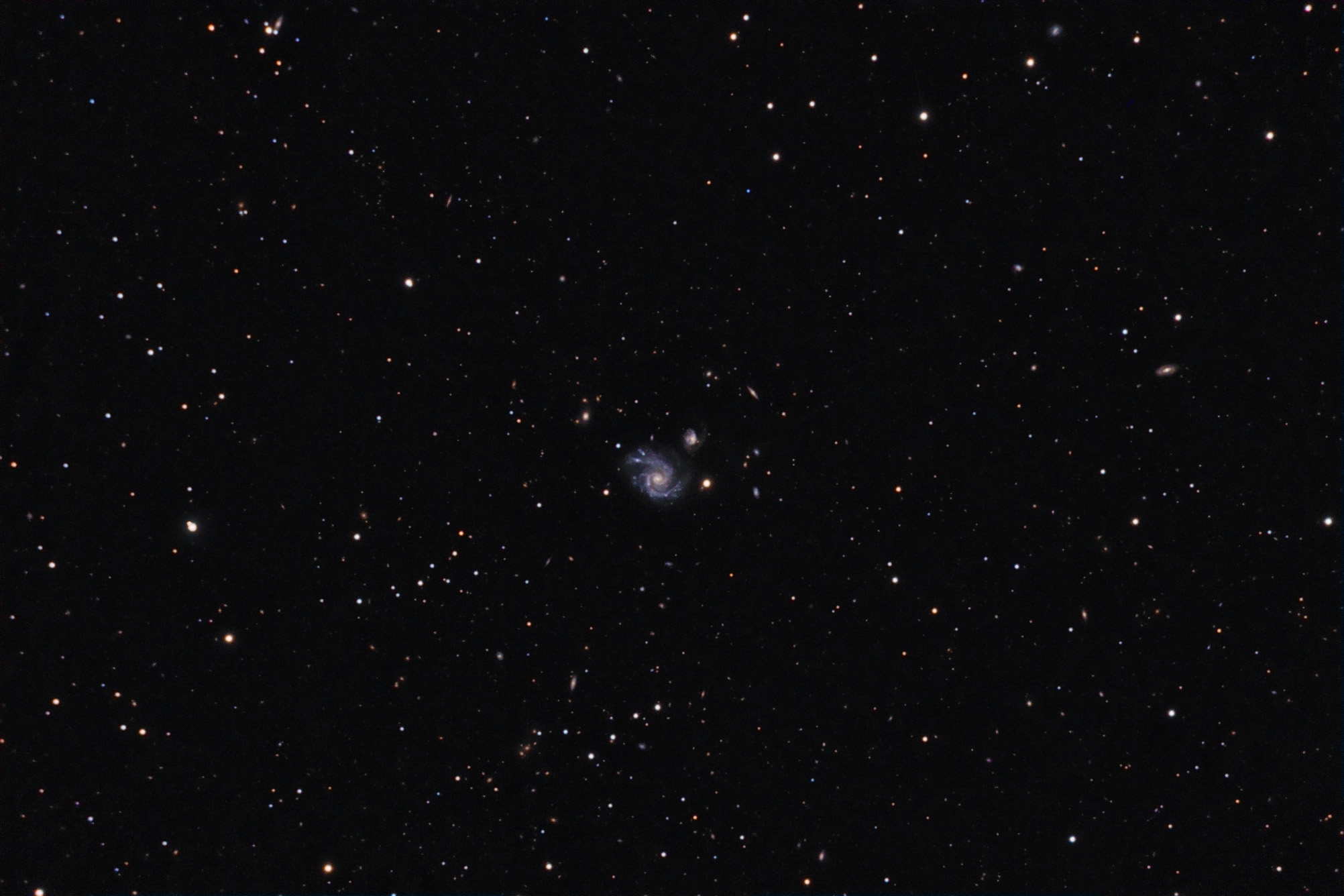