Unfortunately, with no redshift data on the \"companion\", I\'ve put it in quotes since there\'s no way to tell if it really is a companion. Possibly just a line of sight alignment. Arp\'s comment reads: \"One side of ring obscured or disrupted; other side has low surface brightness companion.\" This means that if there is distortion to Arp 43 it is on the wrong side! Everything is normal on the side with the \"companion\". Could be the \"companion\" passed the other side hundreds of millions of years ago and now, while seen near the other side it now too far away to cause further distortion. But then why isn\'t it distorted? It would be nice to have more information on this pair. I found very little though with all the snow I\'ve been dealing with lately I haven\'t had much time to look. A similar blue blob of a galaxy is seen 3 minutes northeast of Arp 43, is it related? There is a hint of a possible tidal tail from Arp 43 going down to the south-southeast to a very red galaxy, 2MASX J10241324+1642567/ASK 647046.0. Again, no redshift data. This is more likely noise as the image is noisier than many due to winter airglow and ice in the atmosphere which greatly increases my sky noise.

Edit: Since this was written the SDSS has had additional data releases which show redshift for many galaxies in this image (see the annotated image). This shows it is not a true companion as its redshift puts it nearly 7 times the distance of IC 607.

While NED shows some 2280 galaxies within this image only Arp 43 has any redshift data. (see edit above as this has changed) I don\'t know why so I can\'t prepare my normal distance annotated image. However, there are 8 asteroids in the image, all but one very faint. Since many are hard to spot I\'ve prepared an annotated asteroid image for them. Looking at the image you will see it happened yet again. An unknown asteroid seems to have slipped into the image. Being that it was taken last February it is a bit late to try and pick it up again so it will have to remain unknown until one of the automated asteroid hunting scopes picks it up again. I\'ve listed the estimated magnitudes of known asteroids by the Minor Planet Center. These are rough estimates it would seem. Some rated brighter than others appear fainter in my image. Some asteroids are very red. My camera is not very red sensitive. This could partly explain the differences but doubt it explains all of it as such asteroids aren\'t all that common.

As I couldn\'t find a link-able Sloan image of this one I\'ve posted one. It shows no hint of a connection to the red galaxy so think it most likely doesn\'t exist. 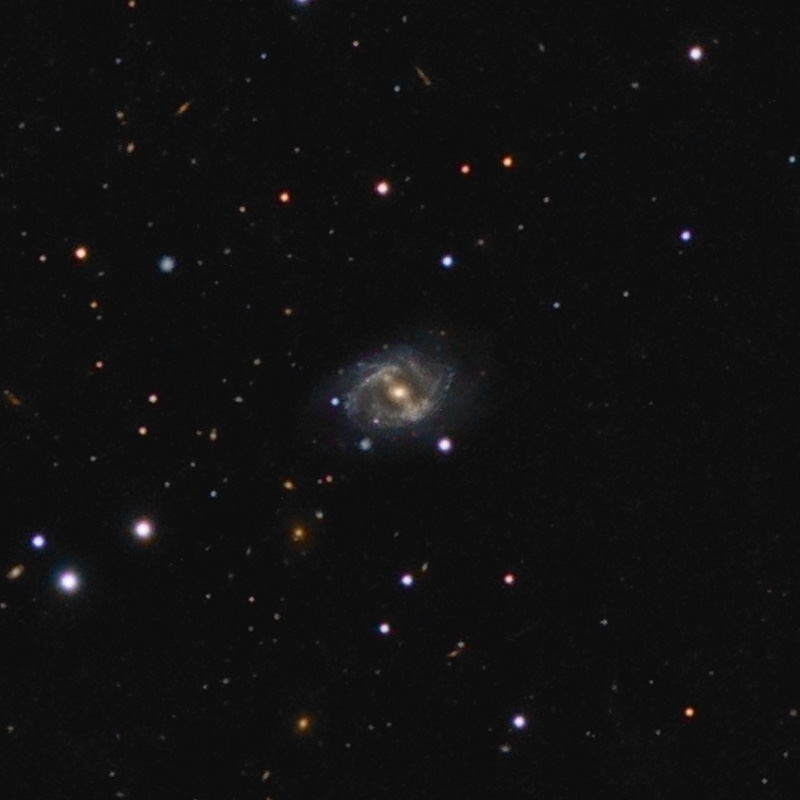 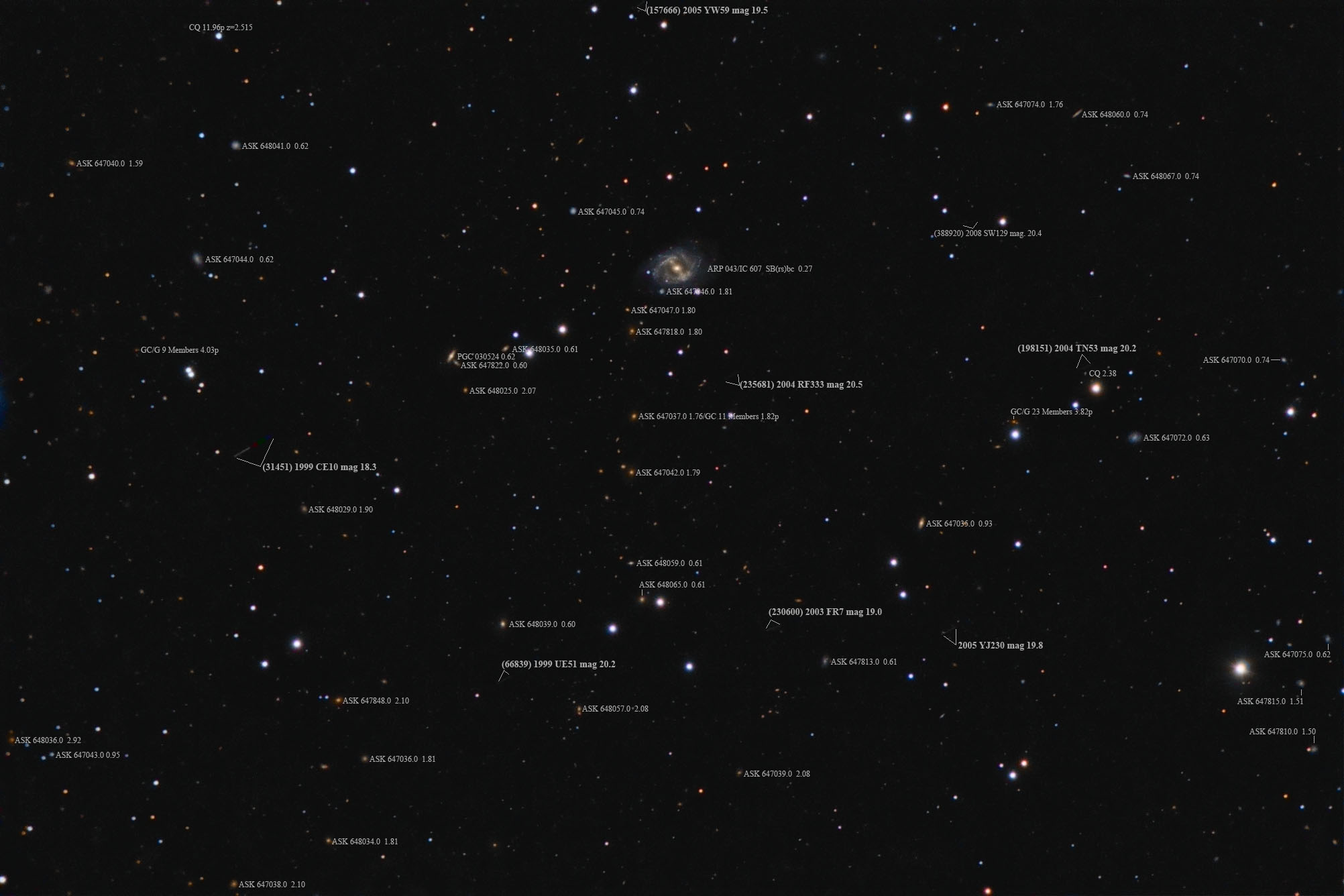 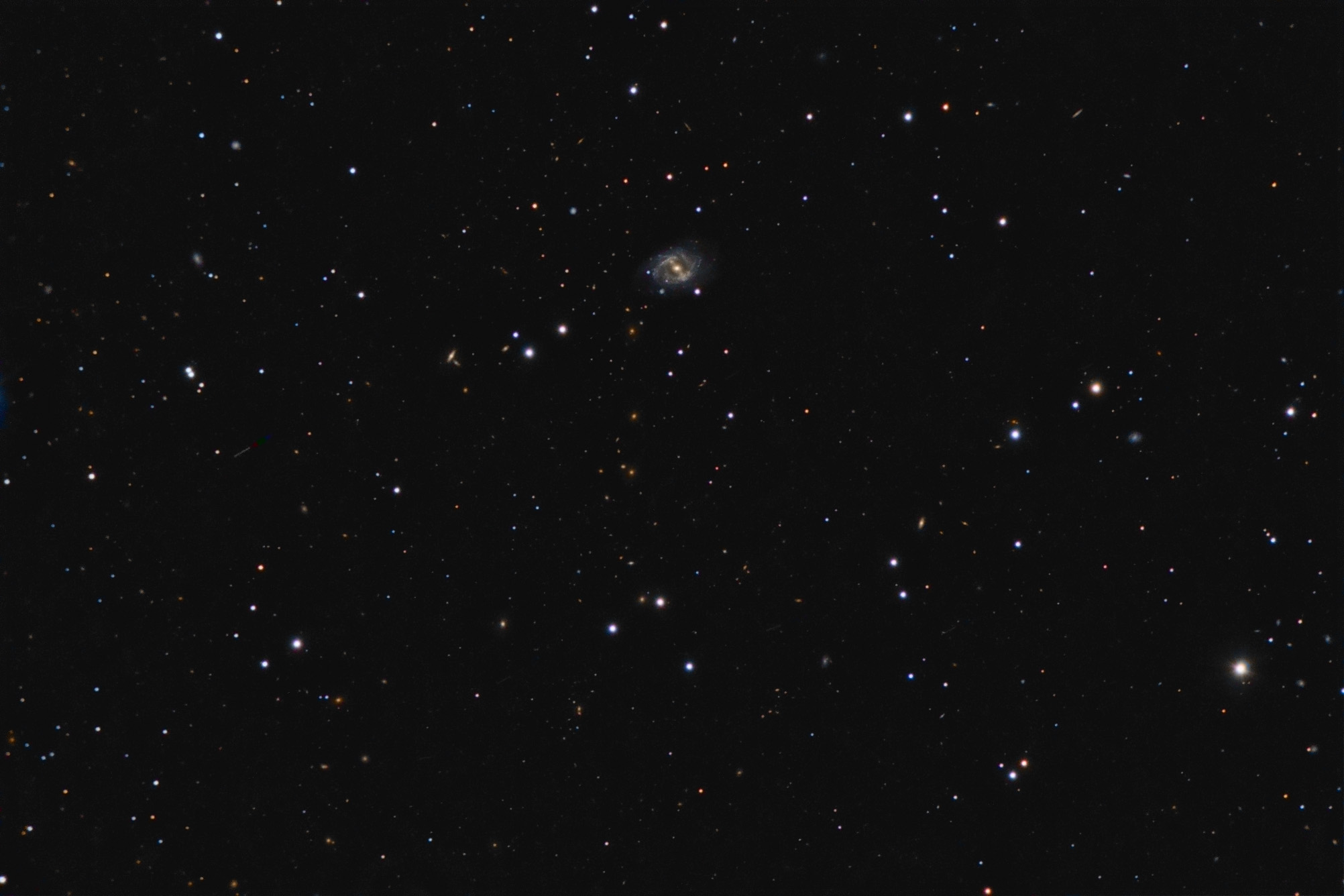