Arp 45 is two or three or four galaxies 400 million light-years distant in the northwest corner of Bootes. Arp put it in his category for spirals with low surface brightness companions on arms. Arp\'s comment: \"One arm leads towards large companion, other towards small companion.\" Is this coincidence or is there some connection. There\'s another problem. Is the companion that is on the arm a galaxy as Arp indicates or just a blue knot in the arm? I don\'t know. UGC and Sloan, for instance, don\'t list it. Others such as the Vorontsov-Velyaminov Interacting Galaxies catalog as well as the CGCG and MCG list it separately. I find no redshift measurement for it. In the UGC catalog, Arp 45 is 09178. It is a triple galaxy in that catalog but the third member is not the blue knot on the arm. It is somewhat to the northwest, a normal looking disk galaxy, a bit smaller the primary galaxy of Arp 45. While an obvious spiral NED shows no classification for it. The main spiral of Arp 45 is classed S(B?)c. I thought it a rather obvious barred spiral so I don\'t understand the question mark. The companion, VV2b, is close to being a one-armed spiral though NED doesn\'t attempt to classify it. The blue object on the other arm of VV2a has neither a magnitude nor classification at NED.

Another confusing object in the image is the orange star at the upper right. At 6th magnitude, it blasted across my image causing one heck of a huge halo with my old generation 1 filters which are very prone to such halos. Taming the halo rather distorted the appearance of the star. But what has me confused is that the star is classed A2. That is normally a rather blue-white star. I checked several catalogs all say A2. I know my filters scatter far more blue light than red but never have they changed a star\'s color that much. The rest in the image are reasonable in color. It is quite red on the Sloan image as well, not shown in my attached images. Though the DSS plates show it brighter in blue than red. I know spectral color changes with whether the star is on the main sequence or off it in some other category but can they change this much? Why is it blue in the DSS but red in Sloan and orange for me? I can understand the IR of the Sloan image making an orange star appear red but how does it happen to a blue-white star? Anyone know what is causing this?

In the upper left of the enlarged cropped image is an odd blue object or objects. NED lists only a 21st magnitude star in that position. In my and the SDSS image, it appears the star is one of three blobs that makes up this object. It is the one to the upper left of the other two. They appear to be galaxies but neither are listed in the SDSS according to NED. My image doesn\'t go as deep as normal so the SDSS lists many galaxies fainter than I am picking up yet misses these. 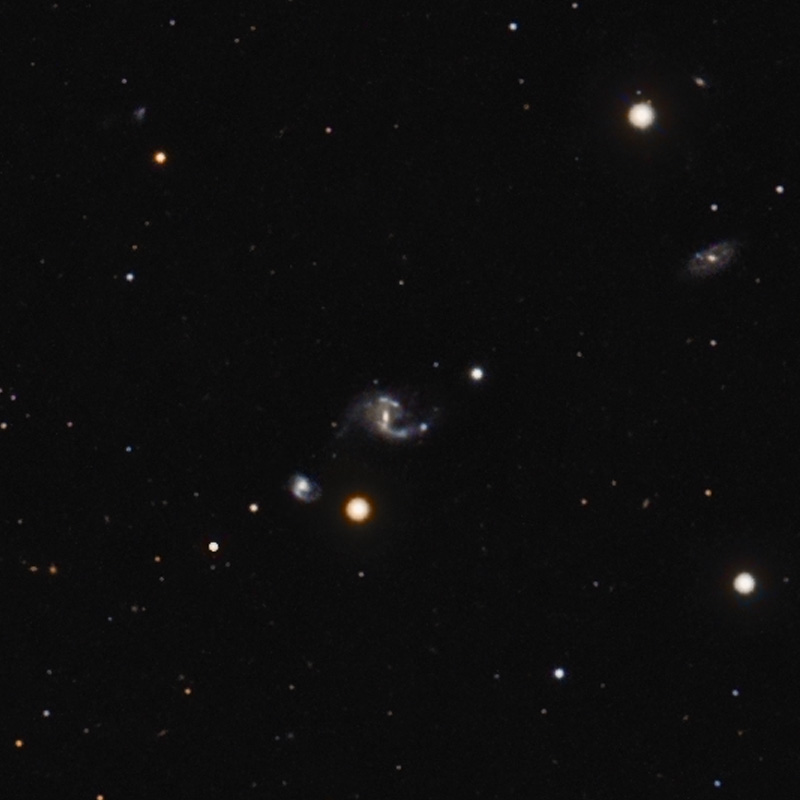 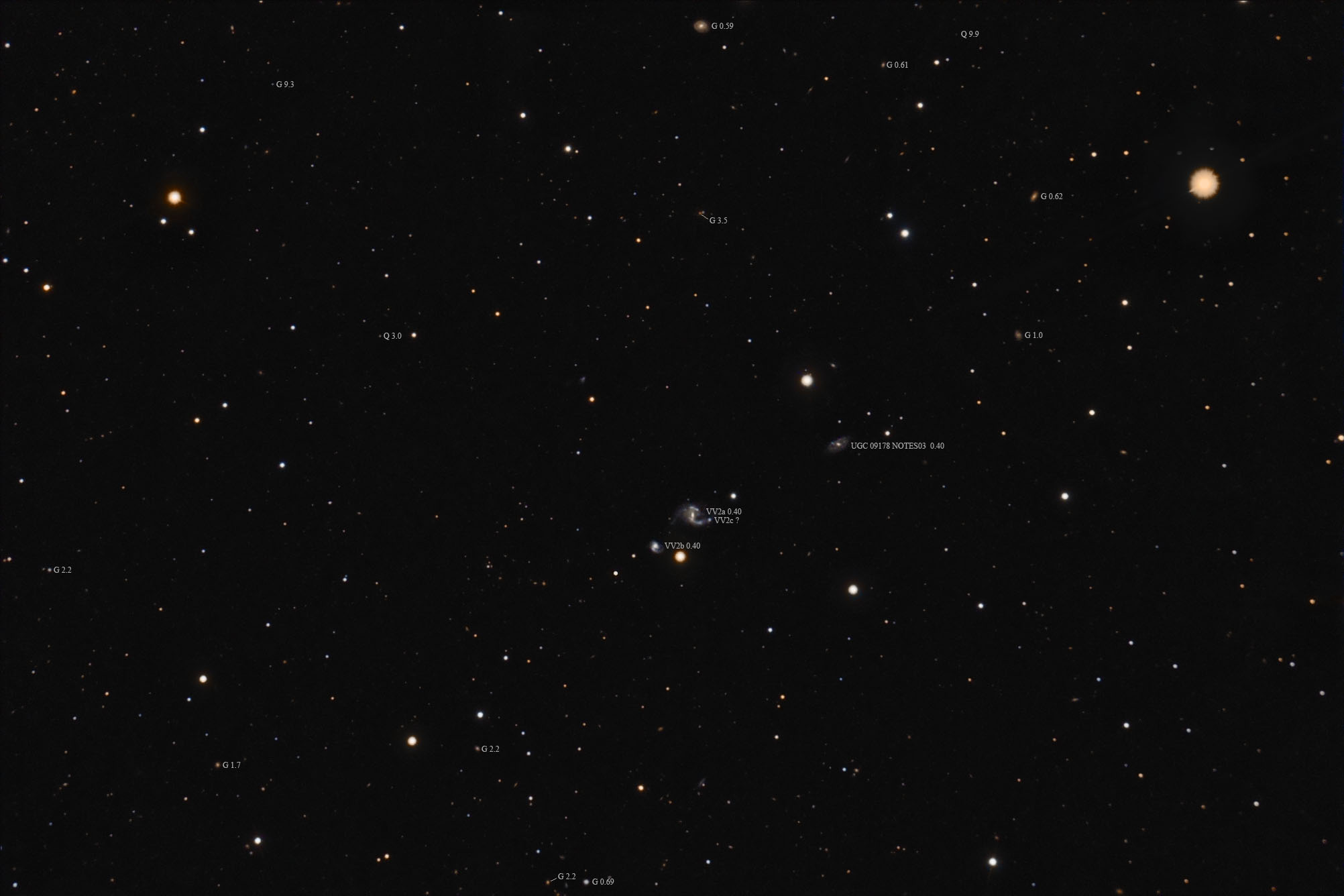 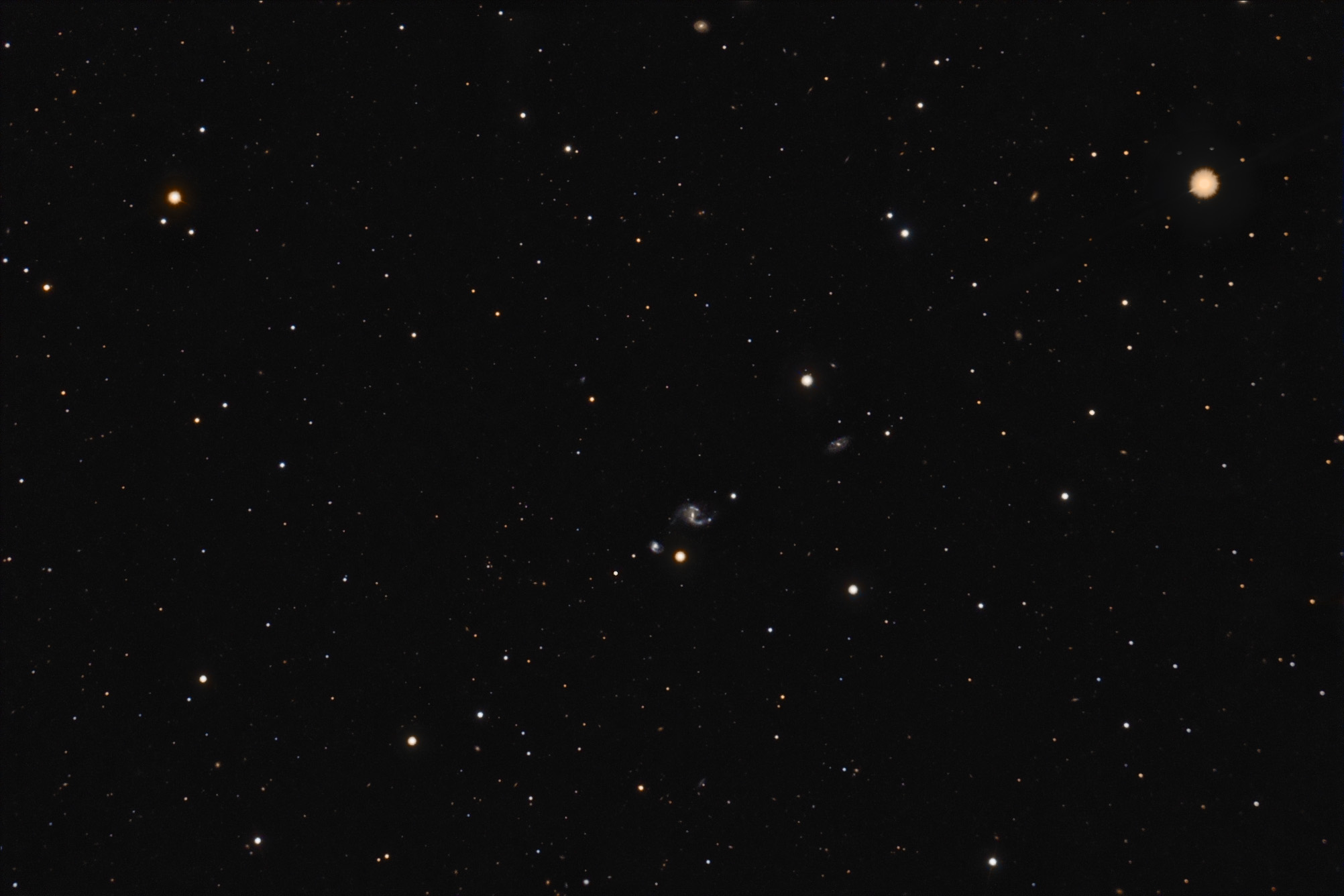