This is a redo of this pair of Arp galaxies in western Cetus about 2 degrees northeast of Arp 50. At -13 degrees declination I rarely get very good seeing for this pair. Seeing was poor in my 2008 attempt and fair for this one. Seeing it is better and my research was rather weak last time I\'m redoing it. I must have entered something wrong as the galaxies aren\'t centered.

Arp 51 is the small spiral to the lower right of the odd pair of galaxies, Arp 144. Like Arp 50 it is in Arp\'s category for spirals with high surface brightness galaxies on an arm. The spiral is an IR galaxy in the 2MASS catalog also known as PGC 475 and MCG -02-01-024. Some catalogs incorrectly call it NGC 7828 which is part of Arp 144. NED has no distance data on it. The companion is ChaBG 069 (Chavira blue galaxies catalog) which NED shows as both a galaxy and as part of a galaxy. So which is it? A knot in an arm or a separate galaxy? Notes at NED on both the spiral and the object refer to it as simply an \"object\". Like for Arp 50, it is near a pulled out arm which is suggestive but certainly not conclusive. To me, it appears to be a background galaxy unrelated to the spiral. This is just the way it looks to me, of course. What do you see? Arp made no comment on this one.

Arp 144 is in Arp\'s category for material emanating from elliptical or elliptical-like galaxies. I can\'t understand what he means by this. Obviously, this is two interacting galaxies one an elliptical-like and one a mess. Arp 144 is about 250 million light-years distant. It is composed of at least two galaxies, NGC 7828 and NGC 7829. The latter is the elliptical-like galaxy as it is classed as S0 pec. NGC 7828 is incorrectly shown as Arp 50 in The Sky\'s database, maybe this accounts for my pointing error. It is classed as Im pec. So does Arp see NGC 7828 \"emanating\" from NGC 7829? or is it just the halo of stars around NGC 7829\'s core that is \"emanating\"? The Kanipe-Webb book is silent on this which isn\'t surprising. Arp left no comment to guide us either. Adding to the confusion one note says: \"The spiral or a pair of galaxies are perturbed by a compact elliptical galaxy.\" So this source says NGC 7828 may be two galaxies. I find no other mention of this but it seems possible to me. Both galaxies were discovered by Francis Leavenworth in 1886.

Now, what about the very blue star-like object in NGC 7828? Is it a foreground star or is it a very blue knot of stars in the galaxy? The object is listed as a star in the Hubble Guide Star Catalog but the cores of NGC 7828 and 7829 are also listed as stars in the catalog. So this doesn\'t help any. NED doesn\'t show anything at this position so is of no help. The PSF in my image is galaxy like rather than a star so I will say it is part of the galaxy.

Adding to the confusion I found this: \"According to a note in the IC II, NGC 7829 is a star [13 mag].\" Visually 7829 does appear rather starlike and this note dates back to visual descriptions so isn\'t surprising.

Yes, I know it looks a bit like the Star Trek Enterprise is shooting a massive photon torpedo out its backside. A bit late as much of the starboard side of the saucer section seems to be missing.

The field is well outside the Sloan survey but a few galaxies in the image have distance data so I did prepare an annotated image for those few entries.

The entry for 6dF J0006212-131716 is labeled a galaxy but considering it is star-like and listed with a redshift of z=2.878448 which puts it over 11 billion light-years out I have to think it is really a quasar. 6dF stands for the 6 degree Field Survey. Another odd catalog is the LSCB which is the Low Central Surface Brightness catalog. LEDA = Lyon Extragalactic DAtabase for numbers above 73197. Numbers lower than this are just duplicates of the PGC catalog.

I labeled some of the brighter or more interesting looking galaxies. Only three besides Arp 144 have redshift data and one of those is mentioned above. Most are from an automatic plate measurement survey so has little information other than magnitude. 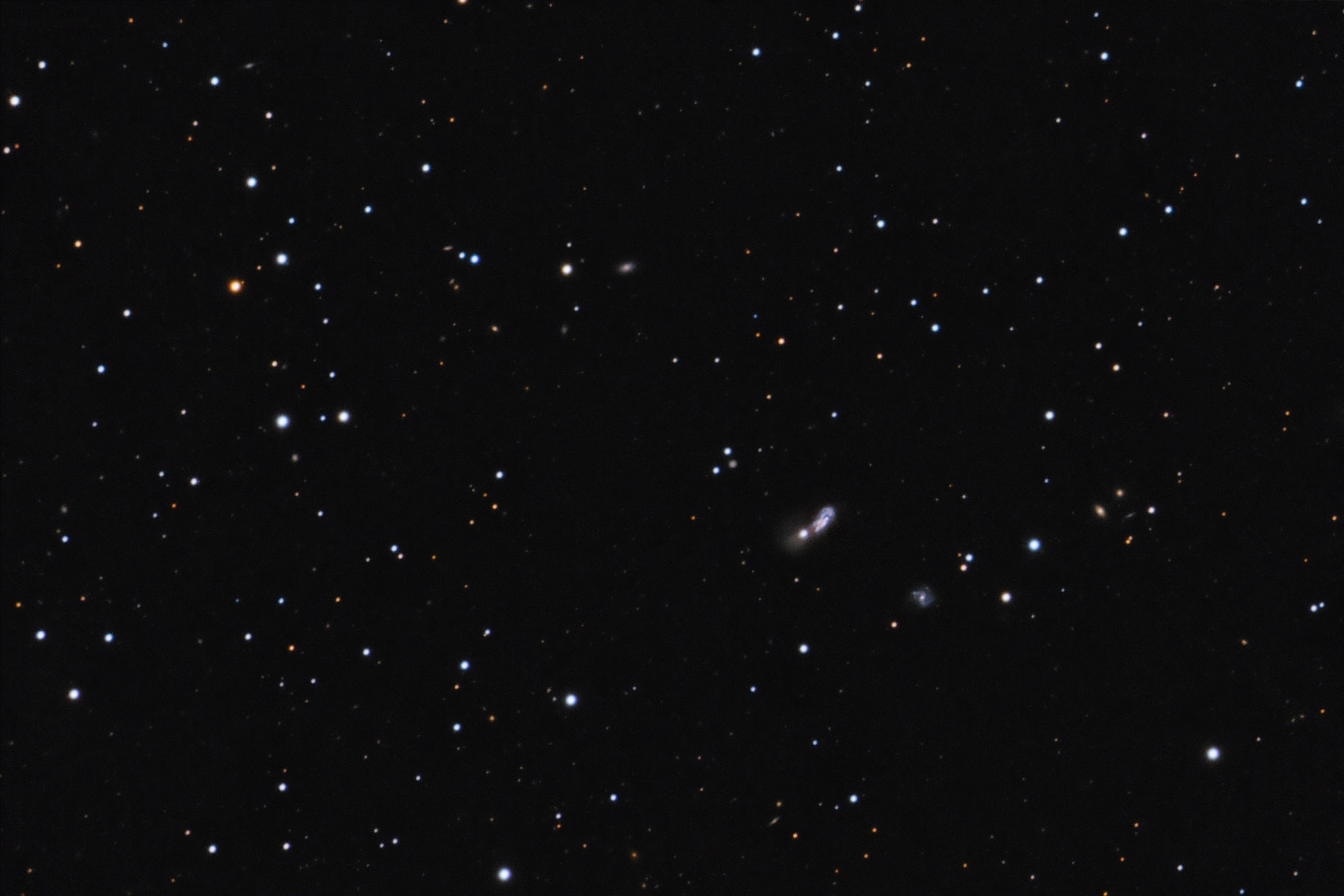 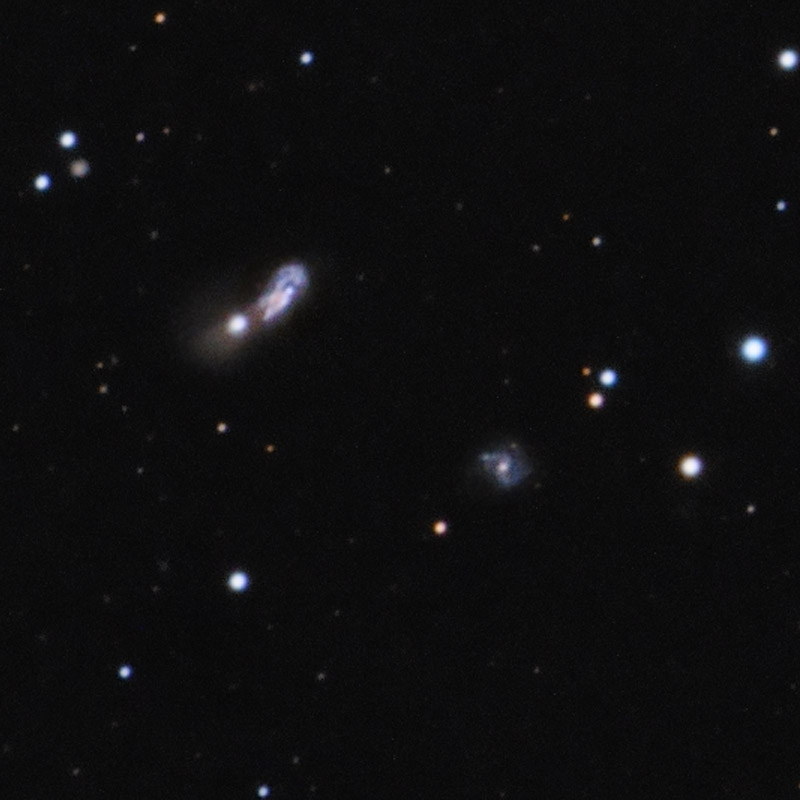 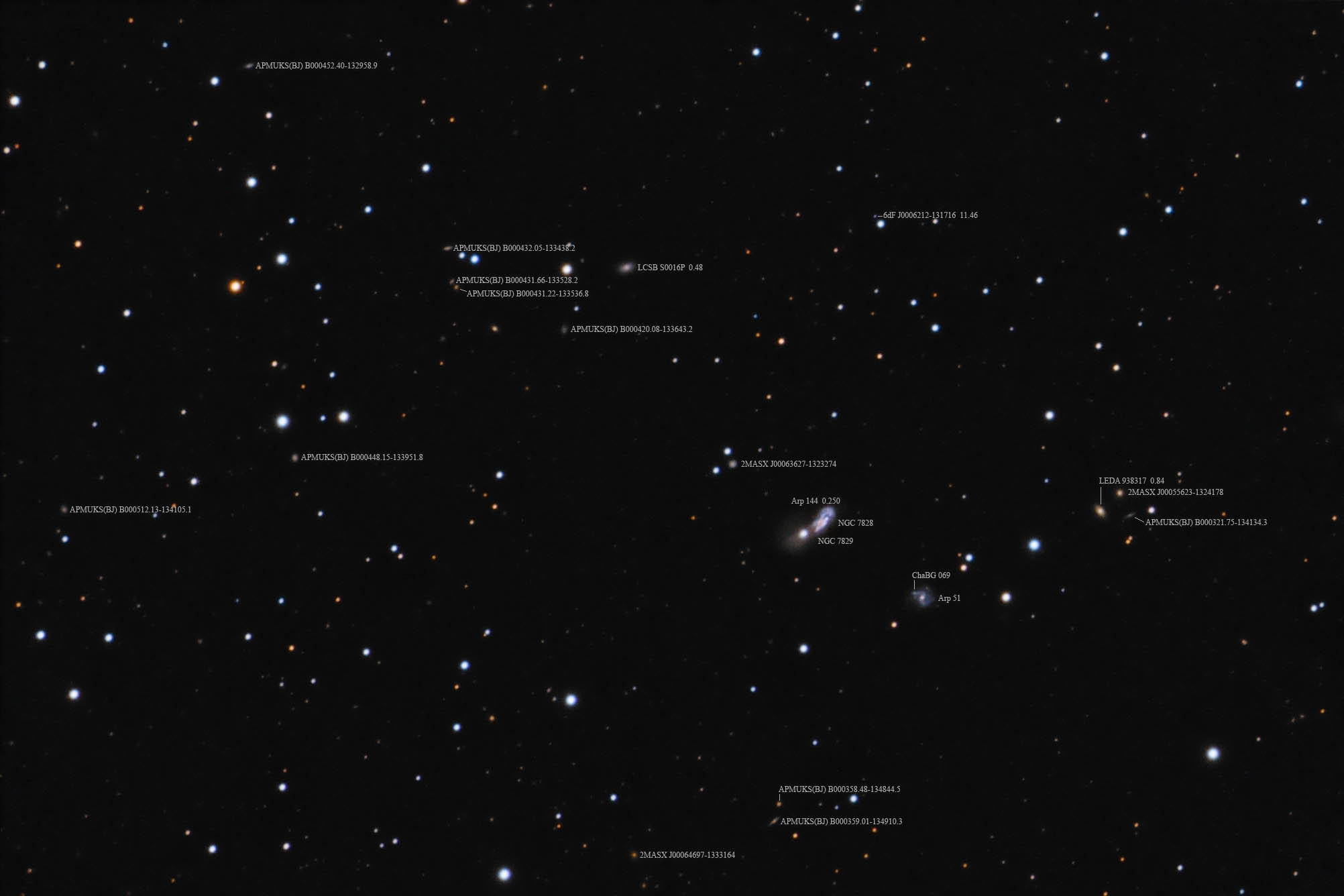