Arp 54 is a pair of galaxies, in Cetus 570 million light-years distant. Arp put in his category for spirals with small, high surface brightness, companions. The main galaxy is MCG-01-07-007 at magnitude 17.1 while the companion is 17.8 magnitude PGC 009107. To me, PGC 009107 is larger compared to the main galaxy than many that Arp put into his category for those with large companions. So is this really the galaxy he meant? It isn\'t on the arm but well away from it. There is a condensation on the end of the long arm that sort of points to PGC 009107. Is this the companion Arp meant? It better fits the description. But Arp apparently does mean PGC 009107 as the \"small\" companion as his note reads: \"Arm toward companion split, contains nodule.\" NED classes it as SBc with HII emissions. Some call the pair an M51 type system due to the somewhat straightened arm leading toward the companion.

While it is likely that PGC 009107 is a true companion I found no distance estimates to further prove the relationship.

NED is adding data from the VLT Very Deep Survey. This field is covered. The result is far more objects in my field being identified than normal. I can\'t begin to label all the galaxies with their distances that are in this image. That would label many hundreds of objects making the annotated image illegible. I did pick those brighter than 21st magnitude in red light within 5 minutes of Arp 54. The number would triple if I went to 22nd magnitude so I had to stop there. Beyond 5 minutes I only picked up ones that caught my eye. Wading through the many thousand entries for this field was more than I felt like attempting. Even with automation, I\'d be weeks moving labels so as not to cover up other objects. For the beginners out there the VLT stands for Very Large Telescope which is located on Cerro Paranal, Chile at an elevation of 2635 meters (8645 feet). It should be VLTI as it is an array of 4 8.2 meter telescopes plus four movable 1.8 meter telescopes which can be combined to make very high-resolution interferometric images, far higher than Hubble can achieve. With its 8.2 meter mirrors it gathers over 10 times the light than the 2.5 meter mirror of the Sloan Survey telescope (but with a much narrower field of view). This allows it to pick up far more galaxies in a field it covers than the Sloan Survey does. Too many in my case.

I have some qualms about this survey. Most of the galaxies are star-like in appearance. Even the \"close\" ones appear to be stars rather than galaxies. It doesn\'t help that during the L exposures a set screw that has been giving me fits again came loose allowing the left side of the image to defocus. Still I can\'t tell even the 16th magnitude galaxies seen only in this survey from stars. Are they really galaxies? The redshifts are photographically determined, not spectroscopically. This can be rather accurate for distant galaxies but I\'ve not seen it applied to relatively nearby objects before. Galaxies that do show their true nature are all from the usual catalogs, some are also from this survey as well. But many faint fuzzies were not picked up by this survey which bothers me. There were far too many to note but I did put question marks by a few of them. Others that are quite obvious but without redshift data were left blank. These were from plate surveys or the 2MASS IR survey but not picked up by this new survey. So why did this deep survey miss these obvious galaxies yet pick up so many star-like objects? I just don\'t know.

I picked up two asteroids, one is known and one is not. Being the image was taken 14 months ago as I type this there\'s no way to follow up on it. By coincidence, its trail ends at one of the faint fuzzies no survey, even the very deep one, picked up so earned a question mark. EDIT: The unknown asteroid was discovered two years after this was taken and is (401267) 2012 BF133. 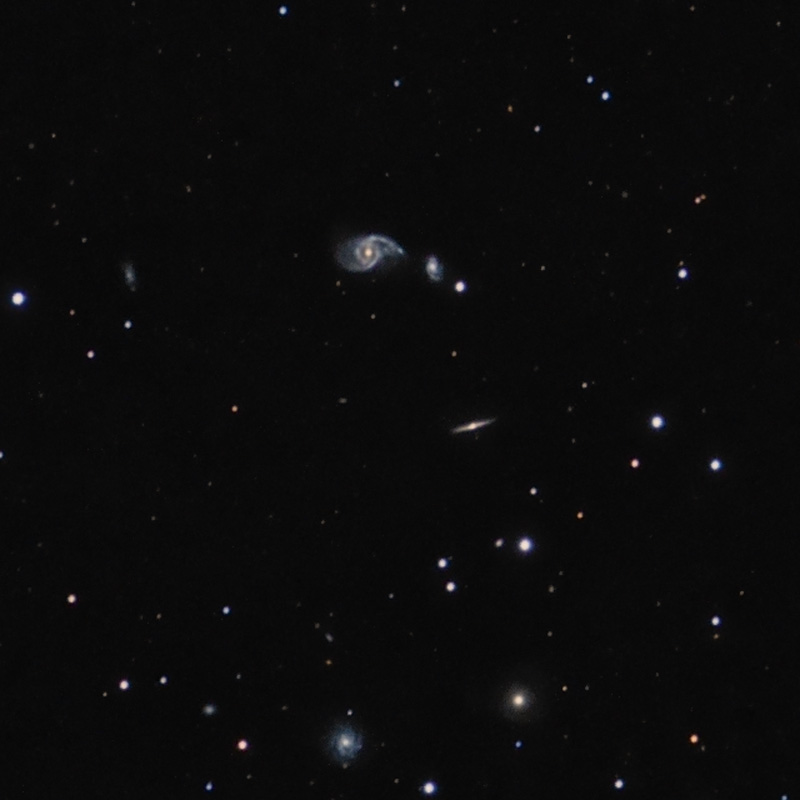 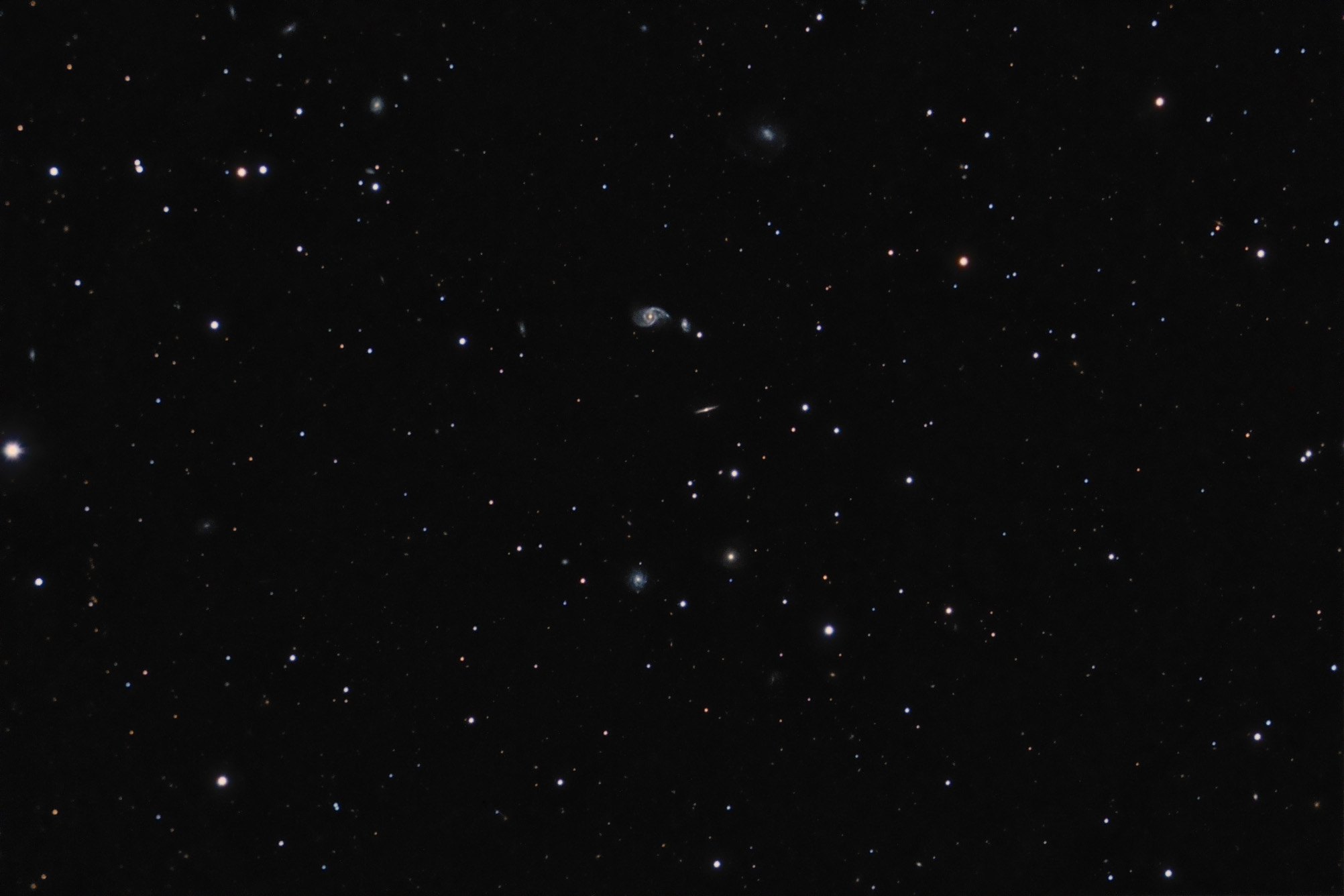 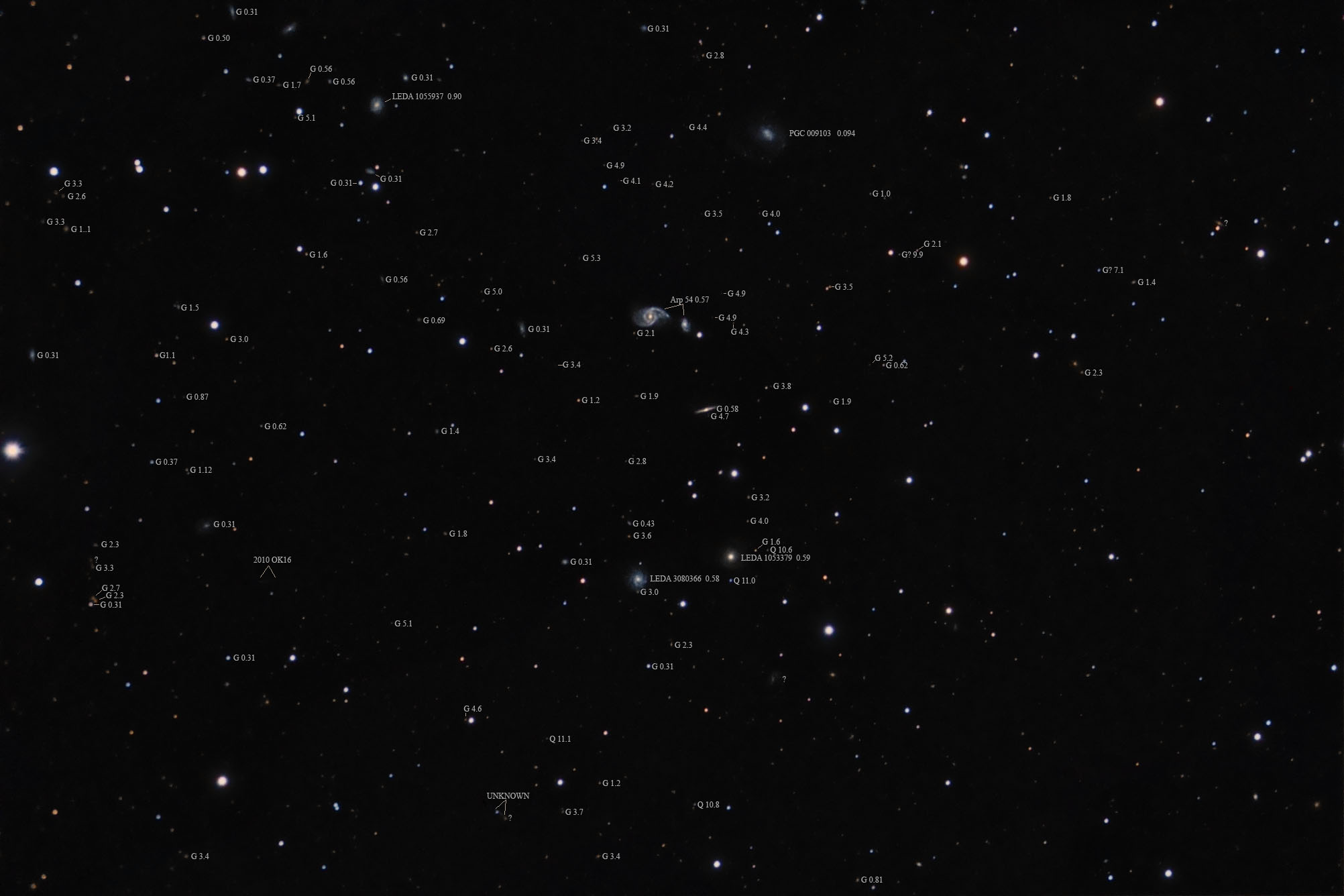