Arp 55/UGC 04881 is a pair of interacting galaxies in Lynx about 500 to 540 million light-years distant. Arp put it in his category for spirals with small, high surface brightness companions on their arms. The companion apparently is the galaxy seen against the very west end of the long arm. That galaxy is SDSS J091553.63+441937.4 but NED has no redshift data on it. So no way to know if this is just a line of sight galaxy or truly related. Or wasn\'t until Hubble imaged it. The HST image clearly indicates the companion is far beyond the colliding spirals as the level of resolution is very different. Arp apparently didn\'t care that there was no such data. It was appearance he was concerned with. Later astronomers could figure it out. It also appears he didn\'t realize the \"spiral galaxy\" is really two interacting galaxies. Or maybe he did but just didn\'t care. In any case, he never mentions this.

His comment indicates he was likely more interested in the four brightenings in the arm while it was going nearly straight south. It reads: \"Arm has four separate condensations in line.\" I can only see 3 in his image as reproduced. Four are clear in my image, however. NED considers the top one to be a separate galaxy rather than the small bright star cluster it most likely is. Adding to the confusion it appears there\'s a blue star in our galaxy right on top of the star cloud in Arp 55. To telescopes under our atmosphere, the combination looks a lot fuzzier than it does to the Hubble Space Telescope which clearly resolves the star and star cloud as two separate things separated by a half billion light-years. I don\'t think Arp understood how common line of sight coincidences like this happen. It also skewed his ideas on quasars. The HST image of this pair can be found at http://hubblesite.org/image/2336/news_release/2008-16 If you can, download the \"Highest-quality\" 10 meg JPG. NASA puts its distance at a nice round 500 million light-years while redshift data says about 540. I used redshift data from NED for the annotated images.

The long tail and its condensations appear to be due to tidal effects from the collision of these two galaxies. Arp gives no indication he realized this at the time of the atlas. I see NASA refers to this pair as \"The Grasshopper\" galaxy. Looks more like a shrimp to me. I find no other group using this designation for this or any other galaxy. Seems to be a NASA/HST term. NED makes no attempt to classify the fainter southwestern member and labels the northeastern member with the long tail simply as \"spiral\" Both are listed as having HII emission which is common with interacting galaxies.

There are several galaxies in the image with the same redshift as Arp 55. It apparently anchors a small galaxy group. One of them, HS 0912+4433, overlaps a second galaxy to the northeast, SDSS J091546.16+442126.7. It has no redshift data. It is much bluer in my image. No way to tell if they are at the same approximate distance or not. They don\'t appear to be interacting. HS 0912+4433 is classed at NED as a blue condensed galaxy. The neighbor seems bluer and more condensed if they are at about the same distance.

Another, smaller group of galaxies have a redshift that puts them 450 million light-years distant.

There\'s a galaxy cluster at 5 billion light-years that has the same position (within the 1.5\" error circle of the cluster\'s center) of a faint galaxy. Several others are seen right around it. The cluster is WHL J091538.9+441107. NED shows it having 14 members though no diameter is given. One of the members does have a redshift distance and it too is 5.0 million light years.

To the west and a bit north of Arp 55 is a disk galaxy at 2.4 billion light-years. For it to show that size at that distance it would have to be about 150,000 light-years across. Probably bigger than our galaxy which far above average in size for a spiral galaxy.

I\'ve been asked recently about how big some of these galaxies really are. This is something I give you all enough information to calculate. All my full-size images are at 1\" of arc per pixel unless I state otherwise (rare), the enlargements are given as well. Just count the pixels along a major axis and you have its diameter in seconds of arc. The tangent of this multiplied by the distance gives its size. Yes, I know this isn\'t exactly right. Radius should be used not diameter. The difference, in this case, is 0.00016 light-years! So I do it the faster way not the way your trigonometry teacher would have you do it.

Asteroid (91131) 1998 HX144 to the west of Arp 55 is at an estimated magnitude of 18.3 per the Minor Planet Center. Doesn\'t seem that bright in my image. The image was taken over two nights. The asteroid was only in the first night\'s luminance frames. The trail represents 40 minutes of the 80 minutes I spent on the luminance data. 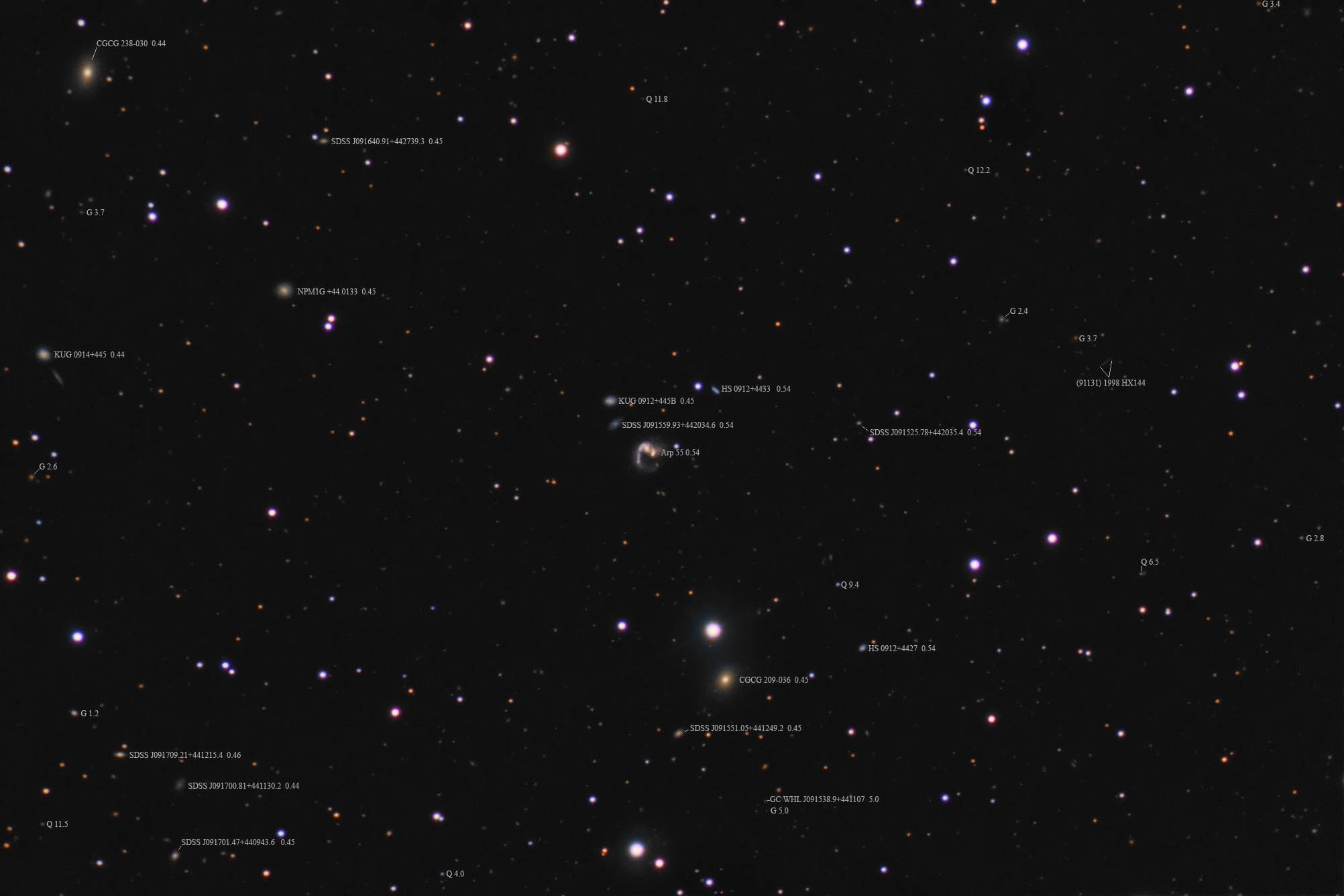 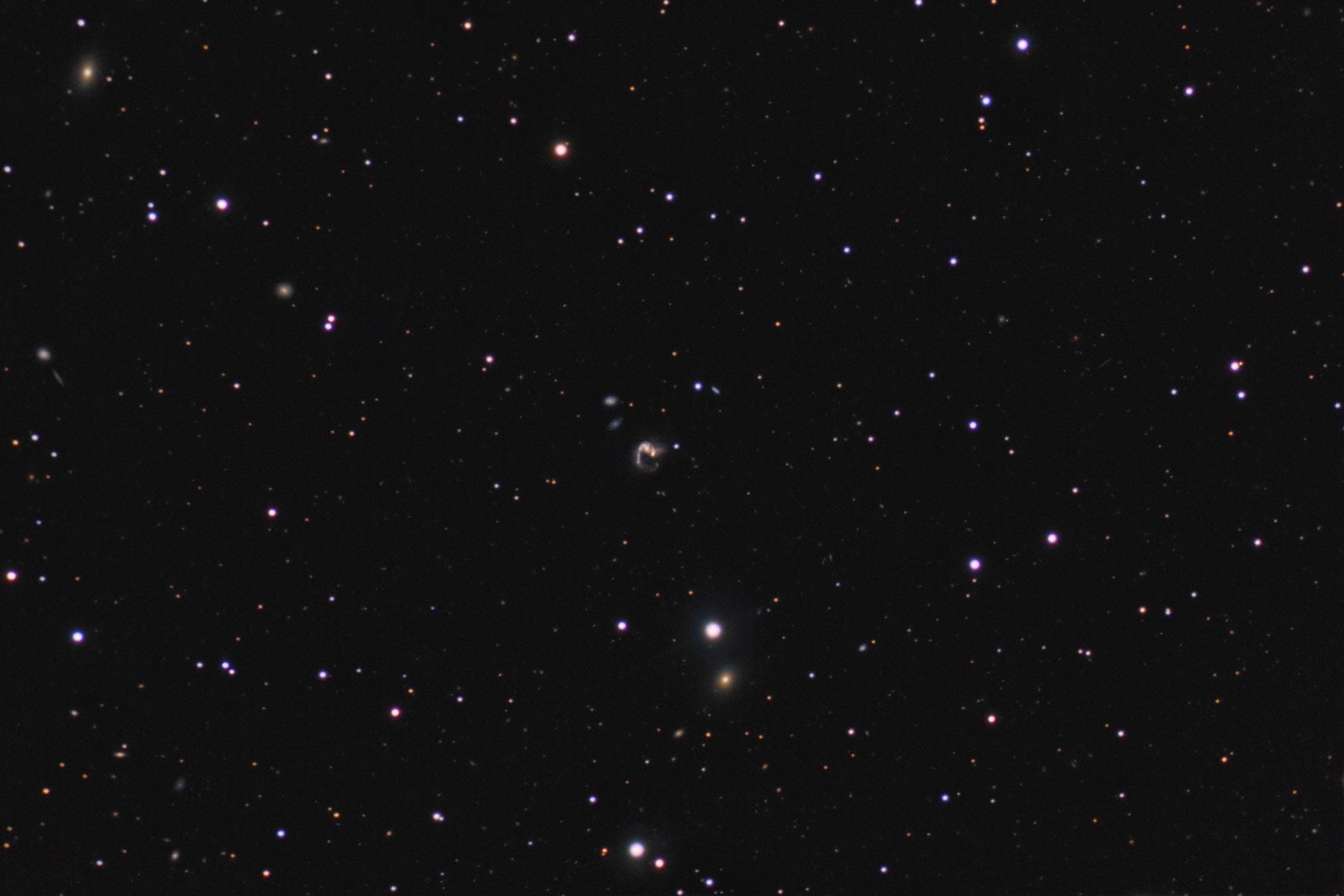 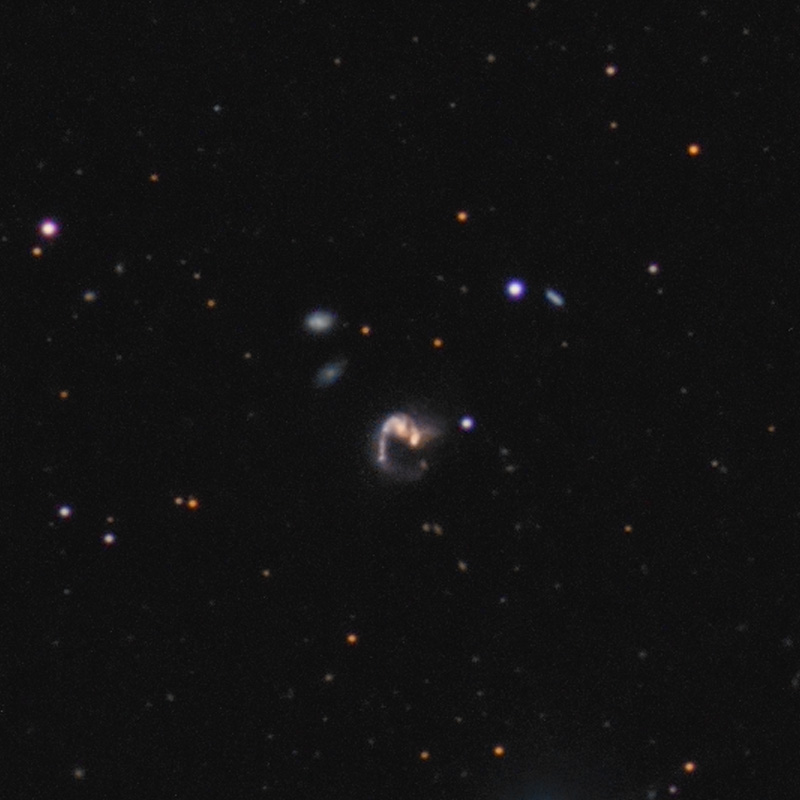