Arp 57 is in the southeast corner of Coma Berenices just a few minutes of arc across the border from Virgo. The bottom of the image is in Virgo in fact. It is about 813 million light-years away. Arp put it in his category of spirals with high surface brightness companions on its arm. This time finding the galaxy on the arm is easy as his comment reads: \"Small companion connected to end of arm.\" Or is it easy? Seems there are two galaxies on the end of the arm, a small round blue one followed a bit further out by a larger red oval one. To add to the confusion there\'s a third one just west of the core of the main galaxy. All are marked on the annotated image. The problem is there\'s no red shift distance for the two on the end of the arm. The third one no one seems to mention is at the same distance and far closer to the core, at least by line of sight. Or is it just a knot in the spiral arm and not a true galaxy? Then there\'s the more distant companion also at about the same distance. It doesn\'t appear distorted so likely hasn\'t interacted with Arp 57 though obviously is nearby. The two \"on\" the arm may be as well, I just can\'t tell. NED makes no attempt to classify any galaxy in the image even the obvious ones.

Coverage of this field at NED is hit or miss it appears. In the upper left area of the image three rather bright galaxies aren\'t in their data base. But below the topmost of the three is a 22.4 magnitude galaxy I\'ve marked that is. Also below these three is a large group of very faint galaxies mostly 22nd and 23rd magnitude. Those I checked are in NED. They appear to be an obvious cluster but NED lists none in this area. Nor does it list a redshift for any in the group -- very frustrating.

A bit above and right of this area is an object at 3.4 billion light-years that is listed in NED as both a Seyfert 1 galaxy and a quasar. Its PSF does fit a point source so likely is a rather close quasar.

This image was taken on a night of far better seeing than normal so was binned 1x1 for a 0.5\" per pixel image scale. 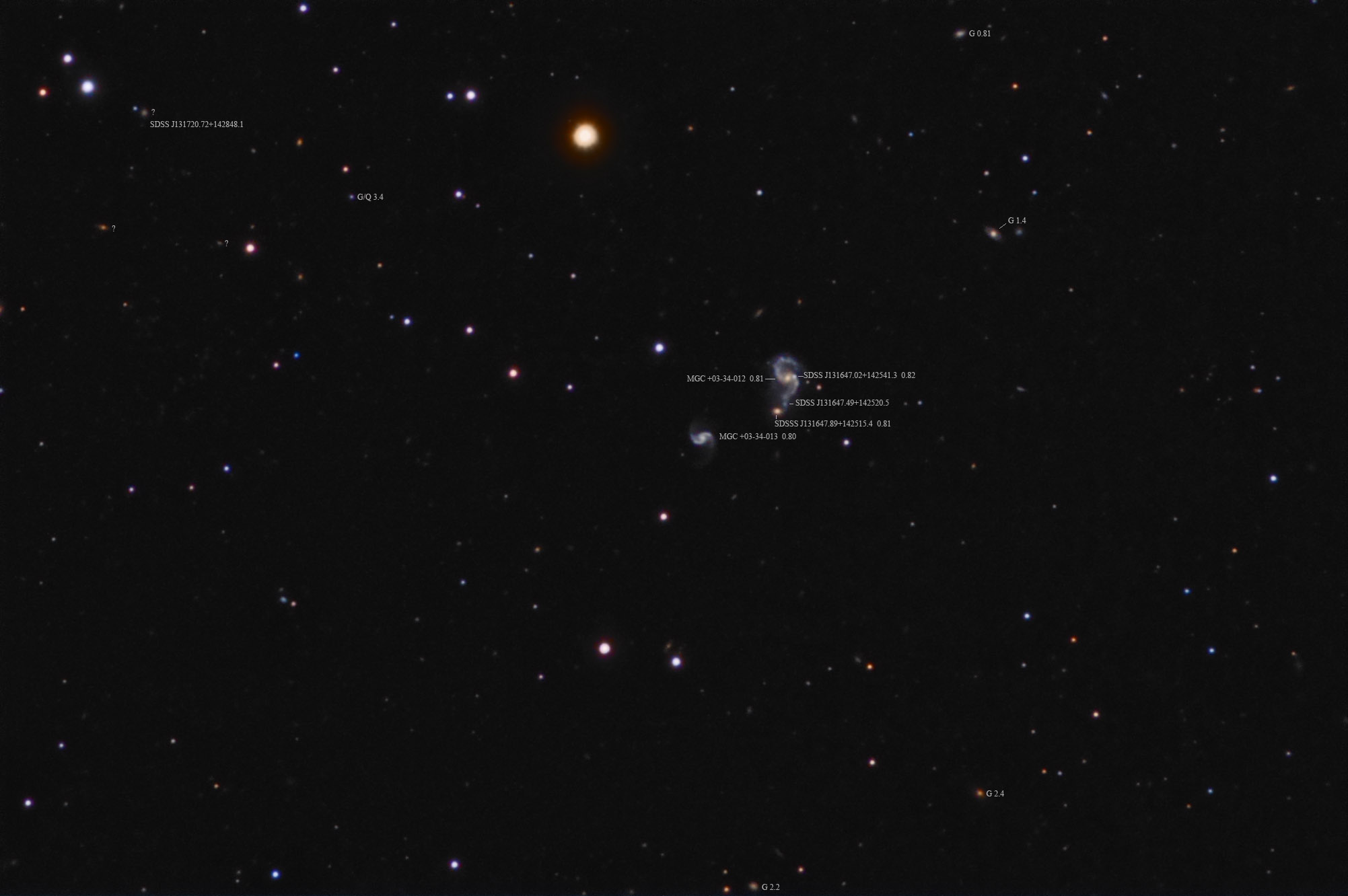 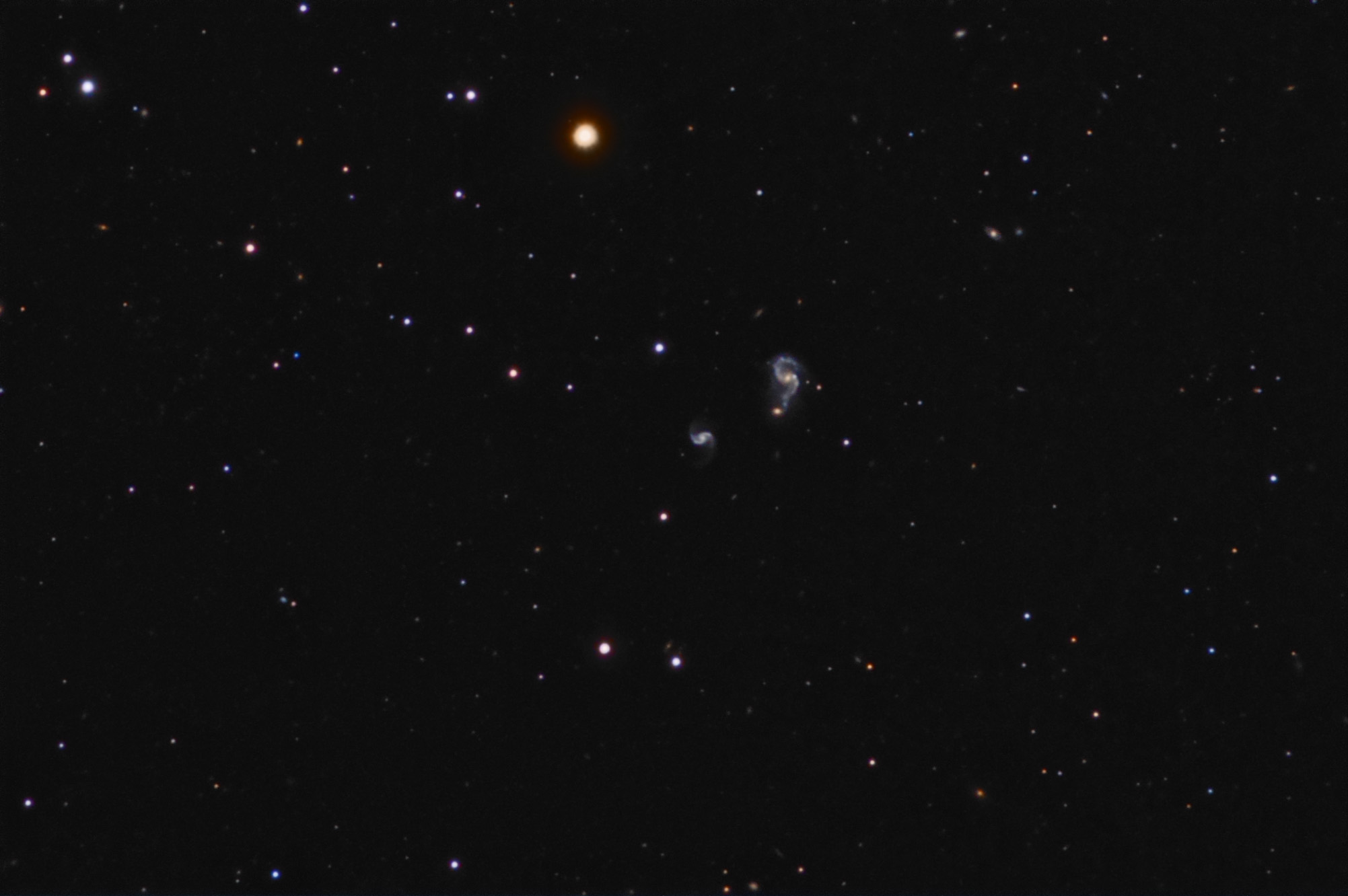 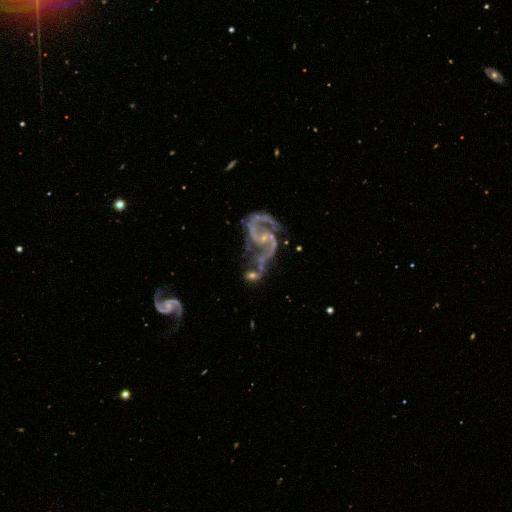