Arp 58, UGC 4457 is a bit over a half billion light-years away in the constellation of Cancer, not far from M44, the Beehive Cluster. I tried taking this at 0.5\" per pixel but seeing wasn\'t really up to it so I reduced the image to 0.75\" per pixel. Still higher than my normal image scale. Arp classifies this one as a spiral with a small, high surface brightness companion same as Arp 52. His notes say; \"...companion on end of broken arm nearly star-like\". I\'d have to agree. Actually, there may be two galaxies on the arm and the arm appears detached from the galaxy to me. The obvious galaxy on the lower arm segment is LEDA 023937 an E0 elliptical galaxy that appears nearly starlike. What\'s really odd is that it is blue in color. Ellipticals aren\'t supposed to be blue as they are usually said to lack the dust and gas needed for new star formation. I could find no explanation for its blue color except one paper saying it\'s not a galaxy at all (see below). Unlike the also blue companion of Arp 52 which was also blue, this one does have a classification and distance. The distance is the same as UGC 4457 so we know it is a true companion. Complicating things is another galaxy, SDSS J03201.11+291311.9. This is the blue blob just left and slightly up from the blue E0 galaxy. To me, it looks like just the end of the mostly detached spiral arm but it is classed as a separate galaxy, not as part of a galaxy like I\'d expect. I also found it referred to as a separate galaxy one reference. It has no classification.

More interesting to me is the very weird blue galaxy toward the upper right corner of my image. It is SDSS J083129.83+191455.2 but I can find no distance or classification data for it. It appears as two very different objects, a compact blue galaxy and a fuzzy arc above it. I find only one designation for it in the Sloan Digital Sky Survey, however. Nor can I find any paper on it. Seems worthy of one or two, at least in my image. Did it too encounter Arp 58? Sure looks distorted and blue like it recently encountered something and that\'s about all there is in the area.

Back to Arp 58, one paper insists that the arms couldn\'t have been the result of a tidal interaction. Apparently saying these are HII regions, not separate galaxies at all. No one else seems to agree but it does explain a blue elliptical \"galaxy\". If that paper is right then that takes me back to that other strange galaxy in the upper right corner as being involved. Where\'s that Ph.D. candidate looking for a thesis when you want one?

Arp\'s Palomar 200\" telescope image of the galaxies is at:
http://ned.ipac.caltech.edu/level5/Arp/Figures/big_arp58.jpeg 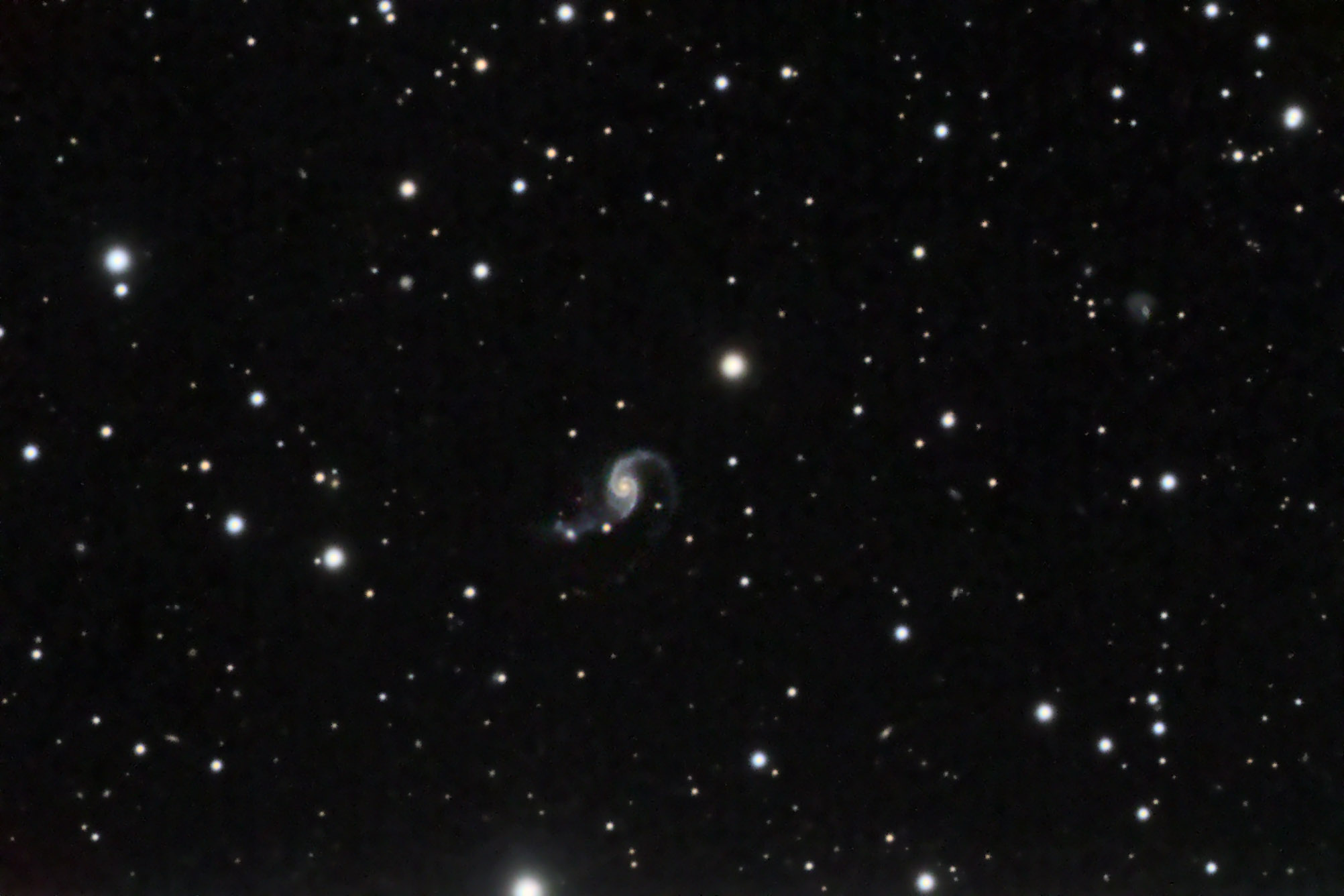