Arp66/UGC 10396 falls under Arp\'s category: \"Spiral galaxies with small high surface brightness companions on arms.\" I assume the \"companion\" Arp is speaking of is the bright object about 21 seconds north of the core of UGC 10396. Problem is that object doesn\'t appear in NED. Thousands of Sloan survey galaxies are listed in my field. None of which match the position of the bright object. One note at NED says: \"Blue condensation 0.12 x 0.10 at 0.35 north center, probably at tip of spiral arm.\" But it appears completely separate of any arm in my image as well as the Sloan image. Some connection appears possible in Arp\'s image, however. But to an inner arm, not the one apparently referred to above. Adding to the problems of deciphering this field is the lack of redshift data for anything in the image other than Arp 66\'s core galaxy. That has a redshift of z=0.020631 which puts it about 280 million light years distant. It is located southern Draco just above its border with Hercules. This one would also fit in Arp\'s 3 arm spiral category. Seems to have three better-defined arms, one is just a disconnected arc, than some he included in that category.

One note at NED has this interesting comment: \"The system\'s components rotate in opposite directions. The dynamical and photometric centers of both components somewhat differ in position and radial velocity.\" If true this would indicate the possibility that this is a merger. Could the mystery object be the remaining core of the merging galaxy? If it was I\'d think there\'d be a strong difference in the centers of rotation seen which doesn\'t appear to be the case. Could be most of the parts were stripped long ago and now the core is left to orbit the surviving galaxy. That would give the time needed to give more concentricity to the two. But then the comment goes on to say: \"The only determination of the central radial velocity found in the literature appears to come from Arkhipova and Esipov (1979). It is listed, e.g., in the UZC catalog (Falco et al. 2000) and is equal to 6185+/-150 km s^-1^. The causes of such a strong discrepancy between this value and our determination (~2500 km s^-1^) are unclear.\" NED uses the 6185 figure but with a smaller error bar. Apparently, it considers this group\'s redshift too unreliable to mention. This then makes me wonder about the first part above. For now, I\'m \"Lost in Space\" over this one.

With no redshift data I didn\'t prepare an annotated image. North northeast of Arp 66 is the very flat, warped disk galaxy SDSS J162704.39+513650.2. I found nothing on it. Why is it\'s disk so warped? (Warped disks didn\'t seem to interest Arp.) Could it be related to Arp 66? Seems unlikely but how else to explain the warp? I haven\'t explored beyond the bounds of my image so the reason may be \"out there.\" To the northwest of Arp 66 is the very low surface brightness disk galaxy, SDSS J162639.02+513533.8. Again no information on it is available to help decide if it could be related to Arp 66 or not. To the southeast of Arp 66 is what appears to be a trio of interacting galaxies. The western one is SDSS J162715.11+513007.1, the northern one SDSS J162715.79+513009.2 and the southern one ... well it isn\'t in NED. It might be a arm of the western galaxy ripped off by the interaction with the northern galaxy. Without any redshift data anything I can come up with is a pure guess.

Unlike most of my images this one was taken and is displayed at 0.5\" per pixel rather than my \"usual\" 1\" per pixel. 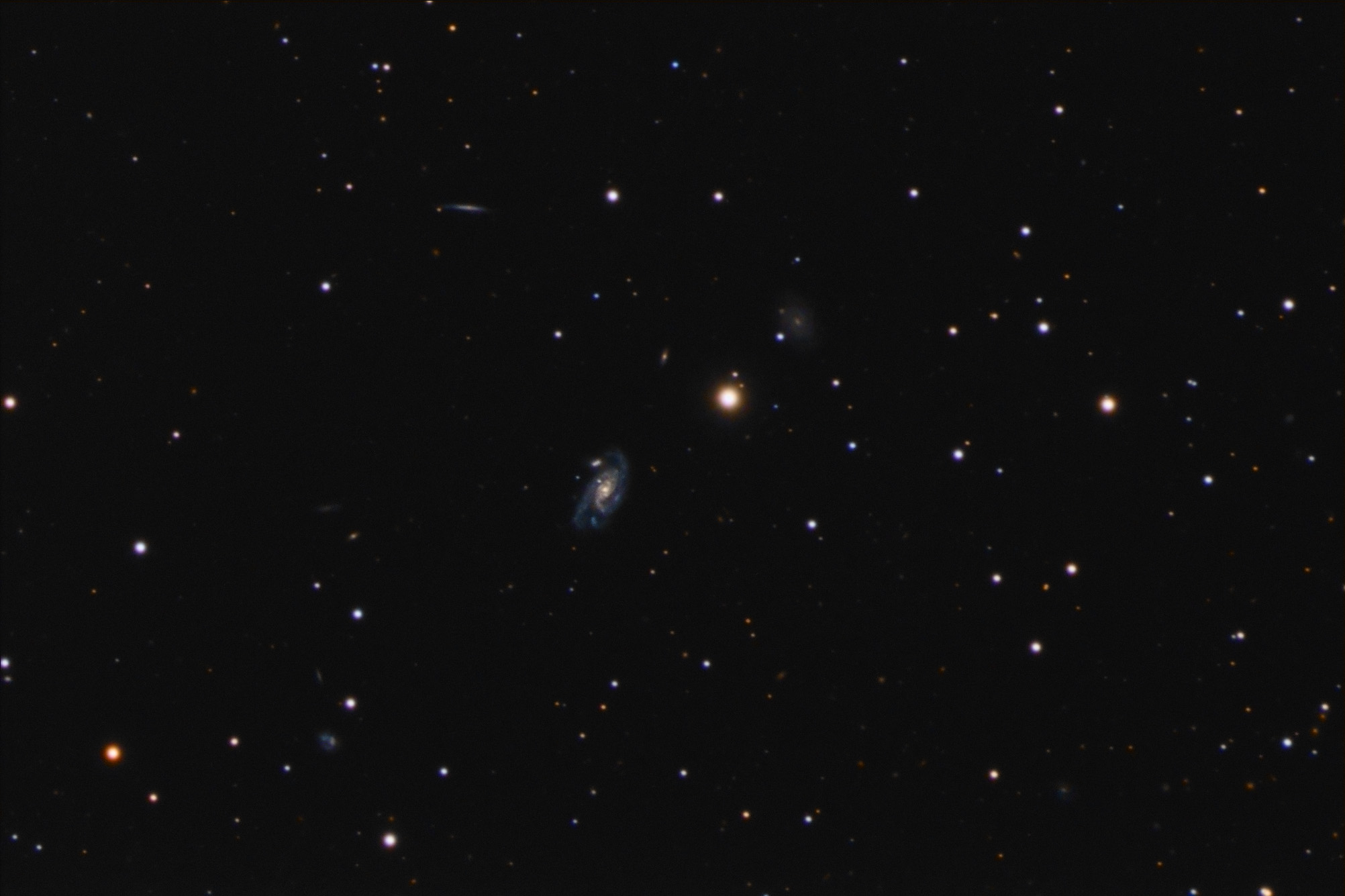