Arp 8/NGC 497, in the lower left corner in my image, is a spiral Arp put in his \"split arm\" category. It is a bit over 350 million light-years distant. His comment reads: \"Bifurcated arm does not start at end of bar.\" That would indicate he is talking about the southeastern arm that sticks out. It is a long spur of a rather normal arm. A note at NED reads: \"Peculiar broken arm on north-preceding side.\" This seems to refer to the odd star clouds arranged in a rather straight line on the other side of the galaxy. The middle one is listed in some catalogs as a separate galaxy (see annotated image). NED, however, says it is part of NGC 497. One source even lists it as a quasar candidate which I find really strange. The galaxy was discovered by Édouard Stephan on November 6, 1882.

Arp 67
Arp 67/UGC 892 is located along the top right edge of the image. It is in his category for Spirals with high surface brightness companions on their arms. As I\'ve mentioned before the majority of the galaxies he considered spirals made the atlas for companions of some sort on their arms. In most cases, it was unknown if the two were related. Apparently, that didn\'t matter. The result is that some turned out to be related, some unrelated and some are still unknown like Arp 88 posted mid-September. In this case, there are two possible companions. Which was the companion Arp refers to? Apparently, both as his comment reads: \"Comps. lie on inner and outer spiral arms.\" Redshift puts Arp 67 at about 225 million light-years. The inner arm spiral has a redshift that puts it about 3 times further at 720 million light years. The one he refers to be on the outer arm has no redshift data but appears to be an unrelated background galaxy as well. Arp 67 is odd in that the \"inner arm\" seems to be a very odd spur. The main arms form an oval ring. At the northeastern end of the bar an odd linear arm goes across the ring then curves around toward the distant reddish companion. The other lies more on the outer edge of the galaxy\'s disk rather than an arm. This arm, as well as the faint arms or plumes going out of my image at the top, may be the result of a merger with a small galaxy. This seems more reasonable than two apparently unrelated galaxies being the cause. The inner arm galaxy is SDSS J012117.42-003311.7. For some reason, the outer arm galaxy never made it into any catalog at NED but the United Kingdom automatic plate survey. How everyone else missed it I can\'t fathom. It is listed in that catalog as APMUKS(BJ) B011845.66-004851.5. In both cases, the name is just the J2000 position.

There are several galaxy clusters in the image. One at about 710 million light-years that covers a major portion of my image. Another is mostly in the northwestern quadrant at 1.2 million light-years. Another is centered on an orange galaxy in the southeastern corner at a bit over 2 million light years. The anchor elliptical galaxy is located at the same position as the cluster though the two have two different listed redshifts.

4 bright asteroids are also in the image and noted on the annotated image. All are bright enough to have left colored trails as often seen in my image. So why aren\'t any seen? Seems this image is the product of three nights. The luminance was taken the first night. Clouds moved in ending imaging. Over two later nights, I collected the color data, fighting clouds all the way. But by then the asteroids had moved on. New asteroids had moved into the field and sometimes did leave color trails but without a luminance trail I played God and edited them out. After 3 nights I still only had 2 red frames with the third unusable. But then the moon was in the way. I never did get a third red but one each of the green and blue was poor. With the ending signal to noise ratio about the same in all three colors, I quit trying for a third red. 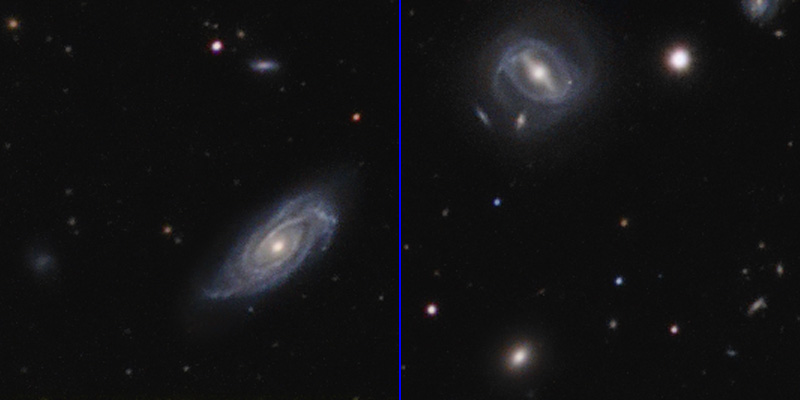 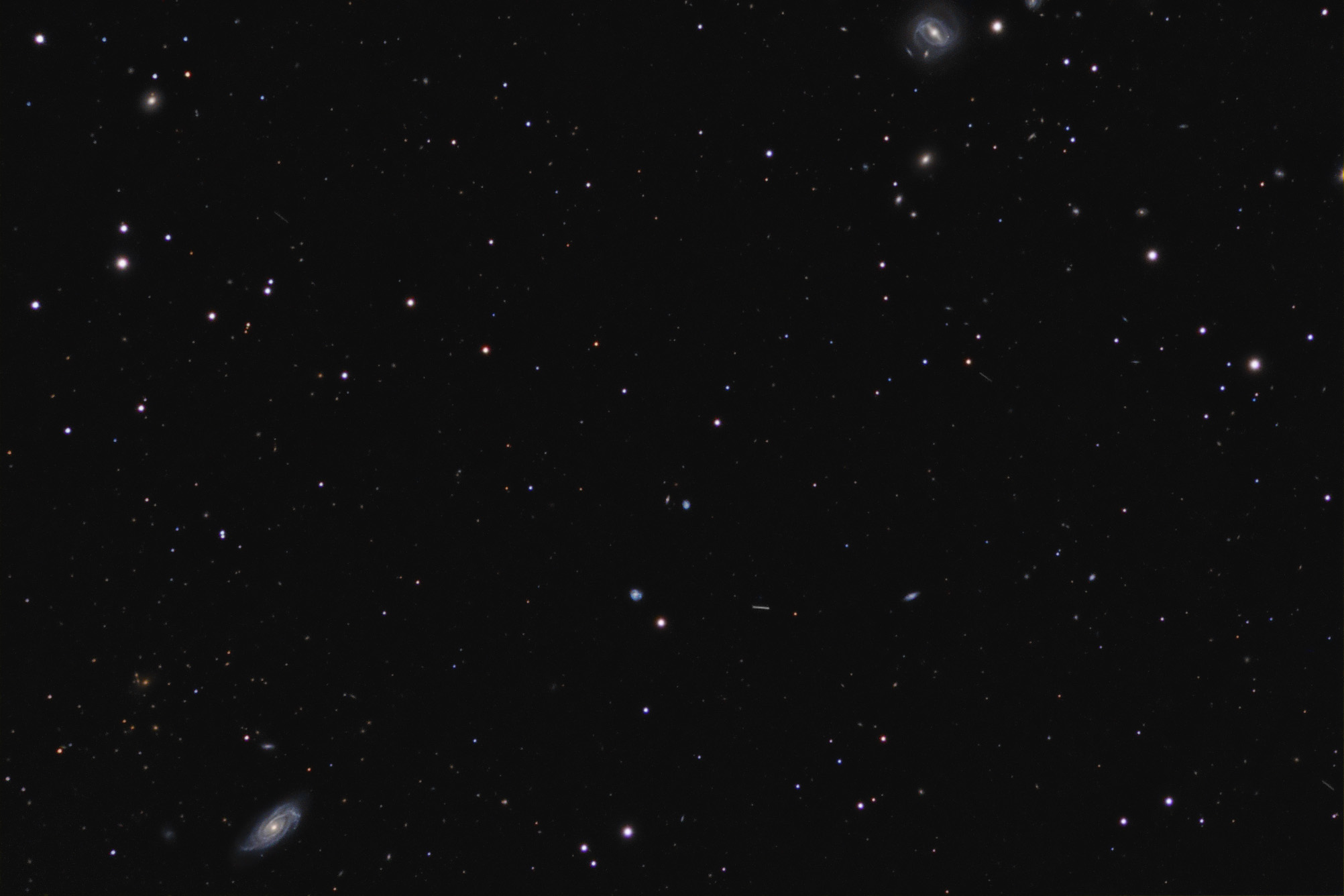 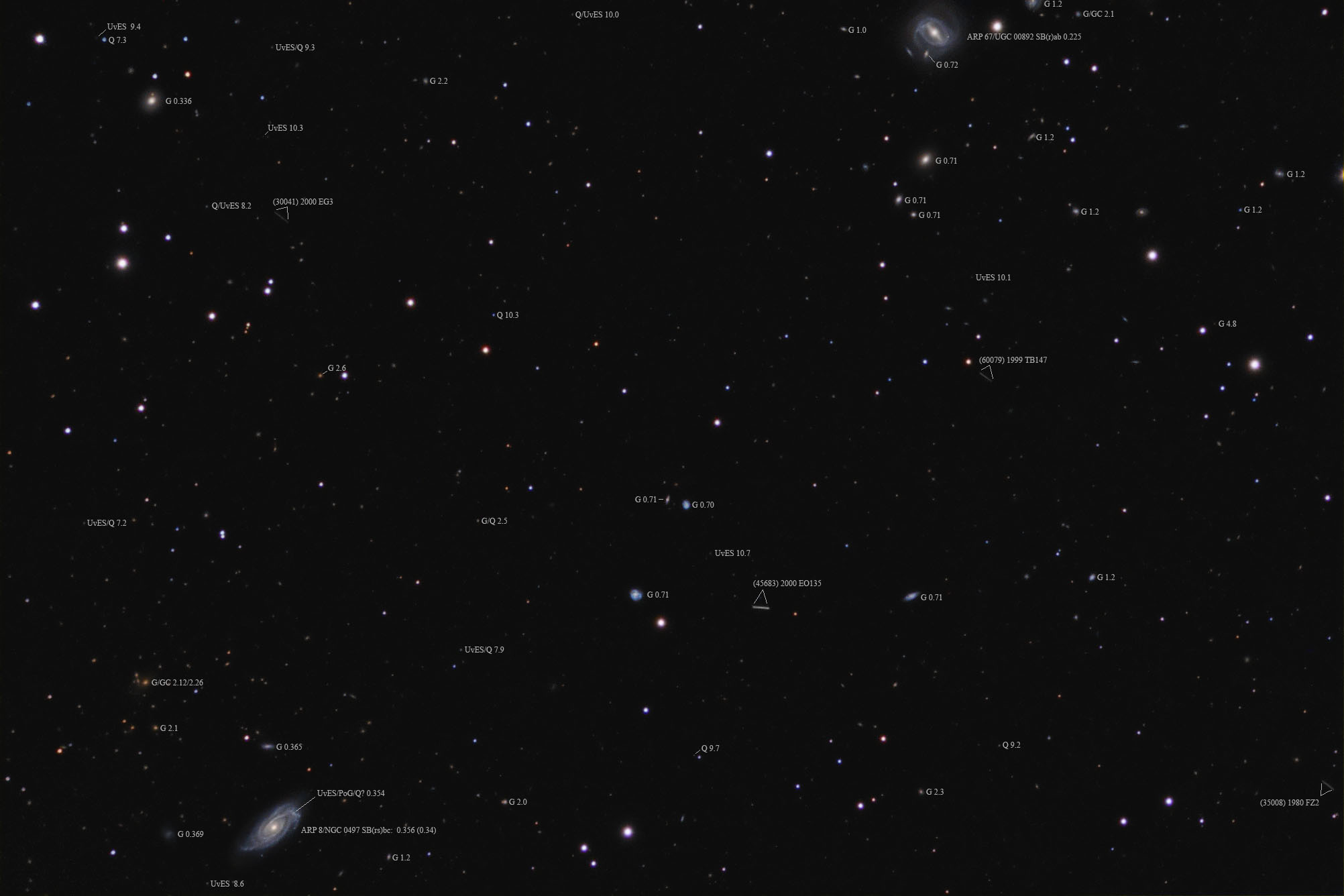