I\'ve never been happy with my 2008 image of Arp 78. I tried this August on a night of good seeing to get better luminance data. Unfortunately, the weather didn\'t cooperate the couple nights seeing was up to what I wanted. I tried anyway but only the core region of the galaxy had enough signal to be usable. I\'ve merged that into the previous image. Thus only the core region shows any improvement. Below is some of the text from the original 2008 post.

Arp 78/NGC 772 is a spiral galaxy in Aries about 100 million light-years away. Arp put it in his category of spirals with small, high surface brightness companions on their arms. He also has a category for galaxies with one heavy arm. Since the companion isn\'t on a spiral arm, just nearby, I\'d have thought the heavy arm category suited it better. Though the companion may be the cause of the \"heavy arm\". NED classes Arp 78 as SA(s)b with HII emission while the NGC project\'s simpler classification is simply Sb I. Neither call it peculiar which I find, well, peculiar. To me, it isn\'t just the long drawn out heavy blue arm but all the debris scattered about it due to a past interaction that would earn it such a designation. At a distance of 100 million light-years, the galaxy would be some 234,000 light-years across including the fainter extensions and plumes to the south-east and north-west. Including just the brighter inner region makes it 150,000 light-years across. Any way you look at it this is a large spiral galaxy.

The companion is NGC 770. It is at the same redshift as Arp 78 indicating they are true companions. All the debris in the area could indicate it is the interacting galaxy that did the damage though it is little distorted which bothers me a bit. Not a lot as it is a highly condensed, high mass galaxy that could withstand such an interaction with a spiral without a lot of obvious damage. NED classes it as E3:. The colon indicates some question over this classification. The NGC project says simply E. Most papers indicate they are likely interacting.

While the Sloan Survey has imaged this field the data hasn\'t as yet been picked up by NED leaving me little to go on. NED lists a quasar behind the galaxy of magnitude 19.63 but gives only a very general position. Looking at the Sloan image I find a knot in Arp 78 has right at its southeast end a very strong, very blue, round object of the correct brightness. Without NED\'s ultraviolet capability it appears white in my image. I\'ve noted it but with two ?? as I\'m quite unsure of the identification. It is [HB89] 0156+187 for those wishing to follow up on this.

To the west of NGC 770 is a galaxy, 2MASX J01590722+1857368, at a distance of 880 million light-years. NED lists it as a \"Poss. dwarf gal.\" I find this very odd. For that distance, it would be about 115 thousand light-years across. By that measurement, our galaxy is also a possible dwarf galaxy! They don\'t show any question about the accuracy of the redshift measurement. To compound this issue, LEDA 212884 at 860 million light-years would be even larger at 142,000 light-years. It too is listed by NED as a \"Poss. dwarf gal.\" When I first wrote up Arp 78 NED didn\'t have any redshift data on these two galaxies. I mentioned without it there was no way to know if they too were companions or not. I didn\'t note if NED had the \"Poss. dwarf gal.\" note at that time. If so, the note may be a holdover from 2008 when the redshift data was unavailable. Other than that I know of no way to explain this situation. Wish I\'d kept better notes back then.

To the east of Arp 78 is a small galaxy at 110 million light-years. It\'s only identification in NED is [WGB2006] 015624+18430_g. (Since this post it has made other listings such as KIG 0080:[VOV2007] 211 I used in this annotated image not having read this text first.) It is likely part of the same group as Arp 78 and NGC 770. It would be a true dwarf at about 16,000 light-years in diameter. NED has nothing to indicate this however nor does it try to classify it. [WGB2006] is the Woods, Geller, Barton catalog in case you were wondering. (And the VOV is the Verley+Odewahn+Verdes-Montenegro catalog.)

The only other galaxy with redshift data is UGC 1445 at about twice the distance of Arp 78. NED lists it as an S0 galaxy. In fact, it appears to me to be a rather classic example of this type of galaxy. Bright core and featureless, rather red disk of old stars indicating star formation ceased some time ago in the galaxy.

There are 7 asteroids in the image, a couple very faint. When I originally looked up this data I covered only three of them. Until recently the Minor Planet Center only allowed you to go back two years when looking up asteroids. They have greatly improved the speed and accuracy of their computer system. Now they allow you to go back much further though not all asteroids will show up this far back in time. Also, some have no magnitude data or it is obviously very wrong. Two it listed at magnitude 4 and 5! But the positions were very close. In fact more accurate than the old 2 year system was. Sometimes it only returned the asteroid number and not the yearly designation. When this happened by entering that into the ephemeris calculator I was able to get the full name. So they have a bug or two to work out but I do like the improved accuracy and ability to go back further in time to when I wasn\'t being very good about recording such data. (Since I wrote this those bugs have been fixed. I used the corrected asteroid data for this annotated image.)

Arp 78 was discovered by William Herschel on November 29, 1785 and is on the original Herschel 400 observing list. My notes from September 10, 1985 with my 10\" f/5 from only a mile away from my present location so very dark skies but hampered by high humidity (normal for this location) reads: \"Large, slightly irregular galaxy with faint difficult star-like nucleus. Appears to be a near face on spiral with some hint of detail in the spiral arms. Even a hint of its spiral nature can be seen. A very interesting galaxy.\"

Arp 78 is a huge galaxy. Due to all the debris from the interaction, it is hard to decide how to measure it. I get a size of 255,000 light-years though others say 245,000. But if I include the faint far-ranging debris its diameter is 350,000 light-years, In any case, it is over twice, maybe 3 times the size of our galaxy. Over time as the debris falls back into the galaxy it likely will shrink somewhat. 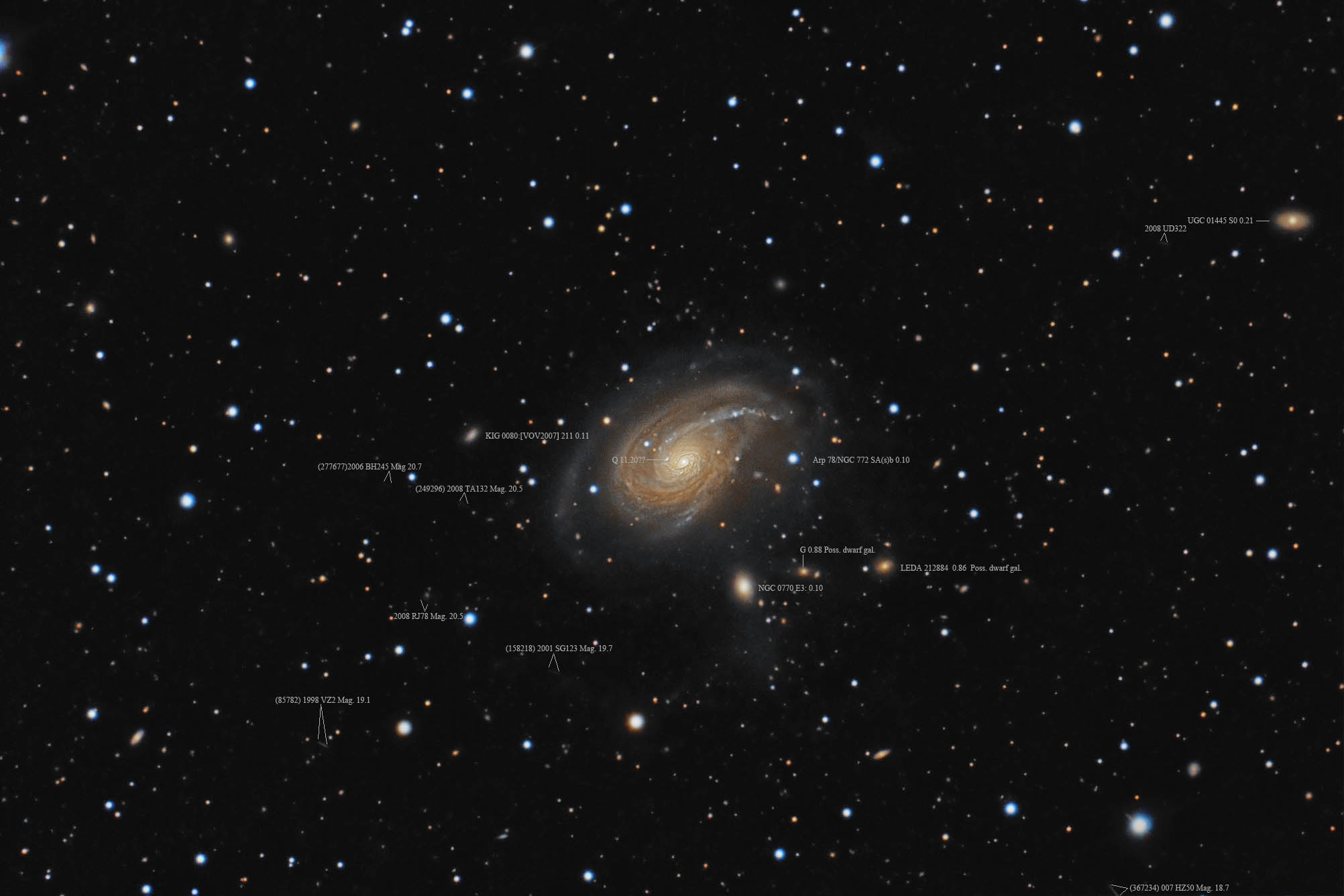 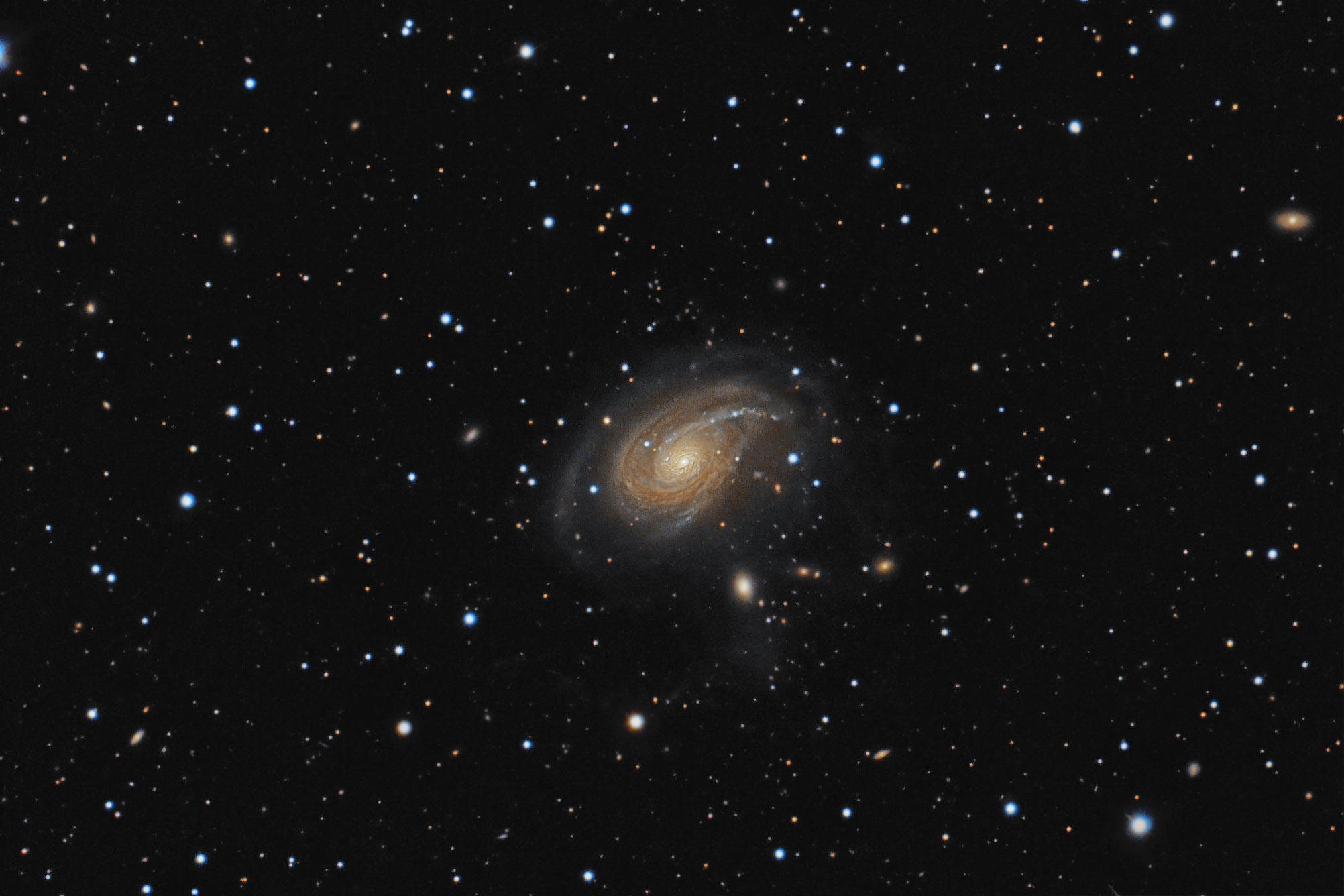