The VV catalog seems to add my confusion when it reads: \"3 or more galaxies with one or two \"bridges\" (at the left). All nearly in contact. Bordered by an arc above and below and still further above by a wide spiral arm. ... The upper arc is terminated by zigzags, or by a chance projection of a remote nest.\" Until that last sentence, I thought I might have the wrong galaxy but it does show a nice squiggle at the end of the upper arm. That arm is quite a bit brighter than the other arm. The UGC makes the most sense when it says of Arp 80: \"Arp\'s class \'galaxies with one heavy arm\' appears more appropriate.\" Amen to that! I believe the absorption break Arp speaks of is at the other end from the squiggle right where it meets the core region. At least I see a strong dust band cutting straight across the arm there which is a very unusual feature. But I can\'t fathom the companion or companions Arp and the VV catalog mentions. Best I can do is the \"zigzag\" or \"nest\" at the end of the arm that the VV catalog mentions.

It does, however, have a companion. It is LEDA 213530 about 3 minutes to the south and a bit east. Far from being on an arm, it is apparently a true companion having exactly the same redshift, 2160 km/s. NED classes it as Im. It is quite blue as are a surprising number of the galaxies in this image.

Below it is yet another companion NGC 2634. It is classed by NED as E1: and simply as E by the NGC Project while Seligman says E1?. Usually, elliptical galaxies are composed of old red stars but this one has outer shells of blue. The POSS plates also show it brighter in blue than red light. Continuing south yet we find yet another group member, NGC 2634A. NED and Seligman classify it as SB(s)bc? sp. The sp means it has spectral lines. It is apparently an edge on barred spiral. It certainly has some bright knots of activity in it. The shells of NGC 2634 are usually an indication it is digesting a rather large meal after cannibalizing another galaxy well into the past. I find its shells more interesting than Arp 80. Arp has a class for such shell galaxies but didn\'t include this one though to me its shells structure is better defined than some he did include. All notes at NED agree it is not interacting with NGC 2634A.

Those 4 are the only ones with any redshift data but there are other interesting galaxies in the image that I marked in the annotated image. MAILYAN 035 is a very low surface brightness, and very fuzzy spiral galaxy that is also very blue. The designation is from the Mailyan Dwarf Galaxy Catalogue. So apparently it is a small galaxy much closer than the previously mentioned galaxies. Though without redshift data this is only a guess.

Every object NED lists in the field has been annotated. Most with a ? for distance. A few that would seem reasonable for NED to know about aren\'t listed. Probably because those that are are either from the 2MASS catalog of 2 micron objects which omits galaxies without 2 micron radiation which usually means lots of warm dust or they are objects with strong ultraviolet radiation. These are noted by UvES. Often these are quasar candidates though they can be just stars with unusual UV radiation and even galaxies. One that is certainly a galaxy is at the top of the image left of center. The others are star-like but without redshift data, I can\'t tell if they might be quasar candidates or not.

The entire field is full of IFN, galactic cirrus. Unfortunately, my color data is somewhat noisy due to clouds so it looks rather noisy. This image was taken over a couple nights but still was severely hurt by clouds. 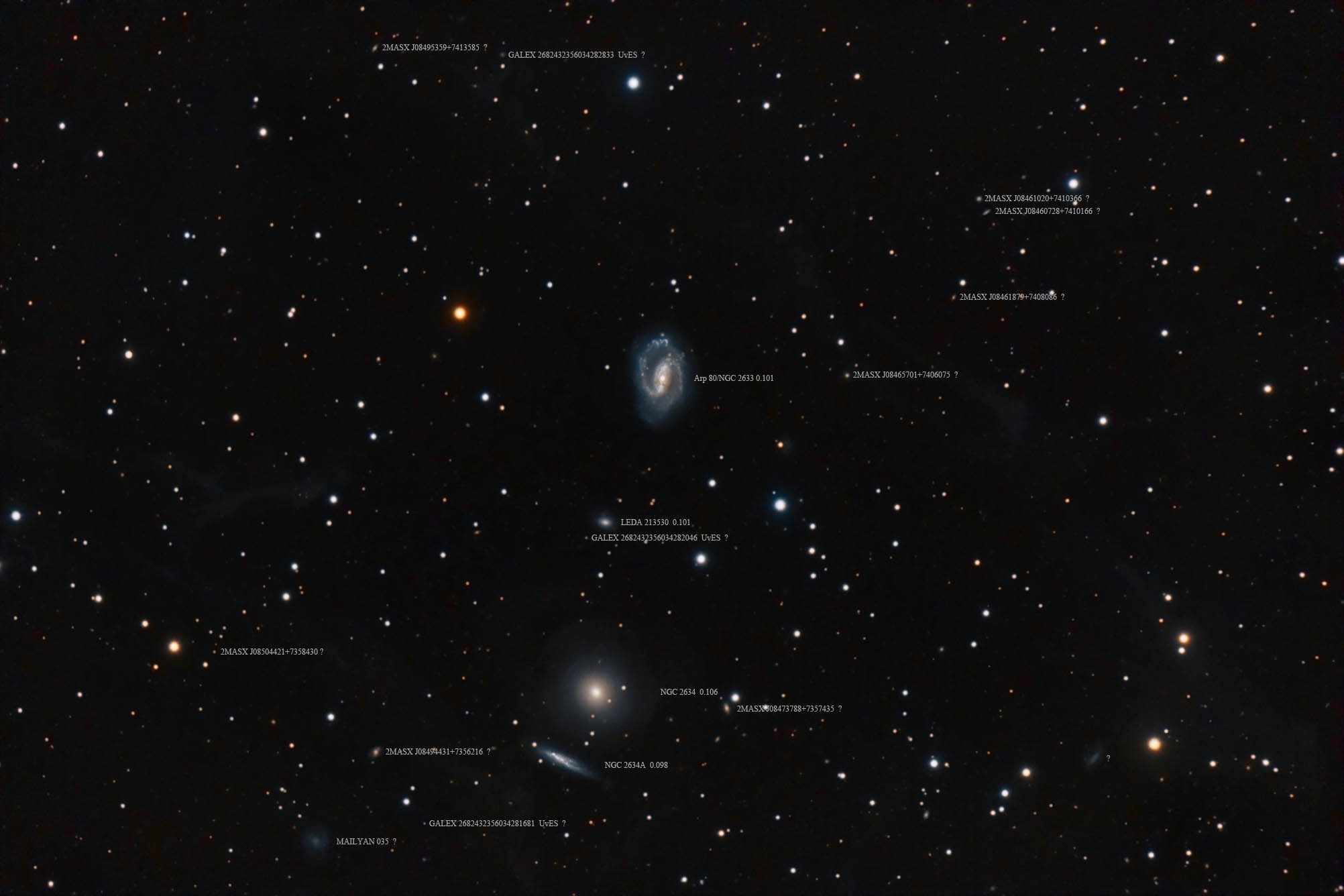 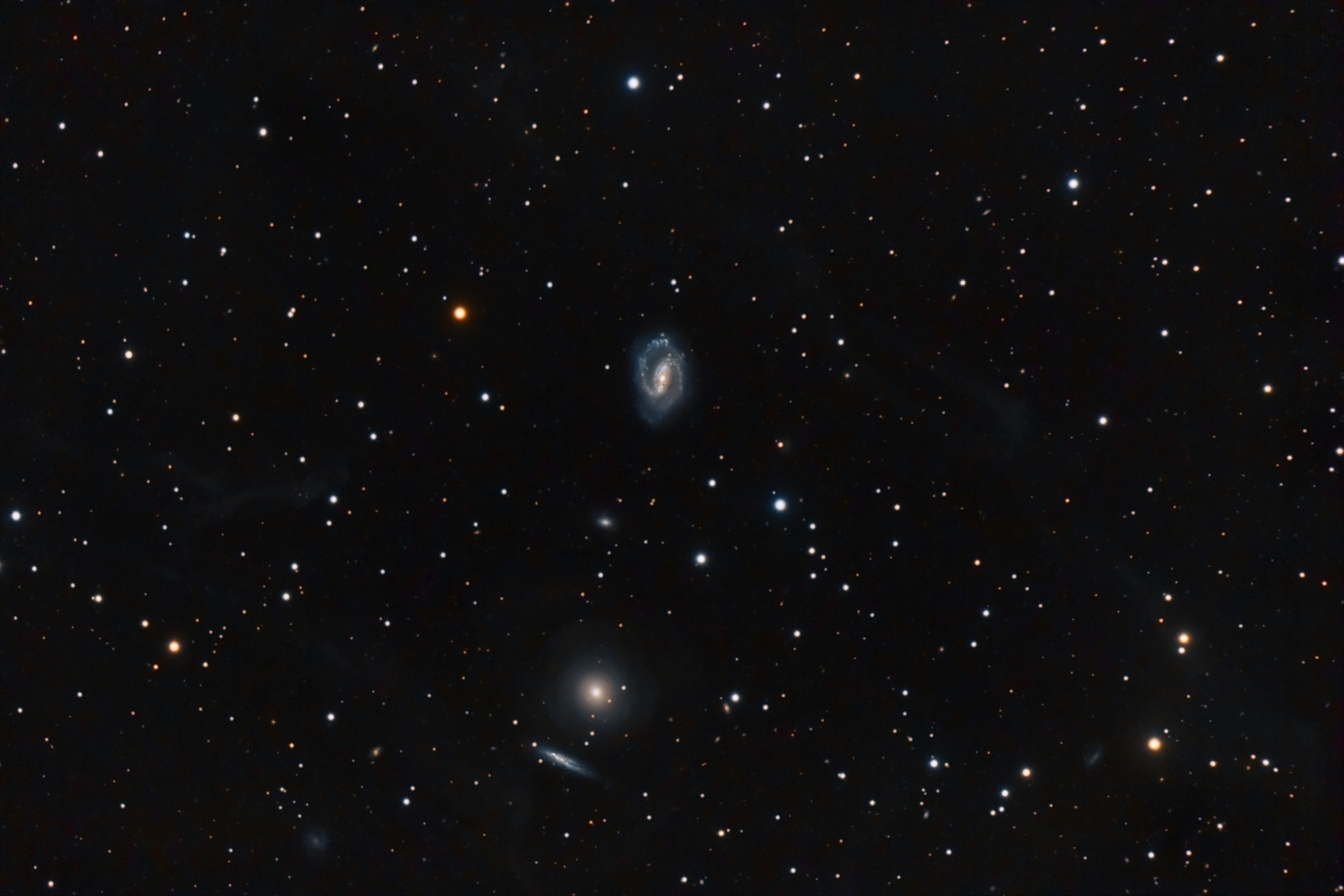