Arp 83/NGC 3799-3800 is found near Denebola in the tail end of Leo, about 170 million light-years distant. Arp put it in his class of spiral galaxies with large, high surface brightness companions on arms. Again, what he sees as an arm is more a plume due to interacting galaxies than a real arm. Arp seems to recognize this in his comment: \"Some hazy material at juncture of two arm; high surface brightness, S shape inside comp.\" Radio data confirms these are interacting galaxies in a common HI halo. NGC 3799 is the small companion, NGC 3800 the large spiral with the odd arm structure of one major drawn out arm and a chaotic mess for the other one. Oddly both seem to start out going northeast. There\'s a third member of this interacting group, NGC 3800A to the northeast. Oddly a note at NED says it isn\'t recognized by NED, whatever that means.

NGC 3800 is classed at NED and by Seligman as SAB(rs)b: pec while the NGC project seems to throw up its hands just saying S... NGC 3799 is classed as SB(s)b: pec at NED with Seligman agreeing and again, S.. at the NGC Project. Both galaxies have exactly the same redshift of 3312 km/s though NED notes one source says NGC 3800 has a much different redshift of 5852 km/sec putting it over 100 million light-years further away. This seems unlikely. NGC 3800A has a nearly identical redshift, 3300 km/s and radio images show a warped HI disk indicative of interaction with the other two.

North and a bit west of Arp 83 is a blue object that the Sloan survey shows both as a galaxy and quasar. The quasar\'s position being 0.01\" of RA further east than the star. Both are shown as 0.09\" in size which is to say star-like. I\'ve shown it as G/Q in the annotated image. If a quasar it is one of the closest ones though at magnitude 19.1 likely too faint to be seen visually. Just north of it is another blue starlike object. It is only slightly closer (but same distance given the error bar of measurements like these) and is shown only as a galaxy.

An X-ray bright galaxy cluster discovered by the ROSAT X-ray observatory -- now deceased -- is centered on the location of a BL Lac galaxy/quasar again depending on what catalog you believe. There\'s little information on the cluster RBS 1015. The galaxy is an IR source in the 2MASS survey, A BL Lac galaxy in the Sloan survey and quasar in the BZB and [MGL2009] catalogs. The latter two while listed in NED as the catalogs seeing it as a quasar, are undefined catalogs in NED. When asked to do so NED responds that isn\'t a valid NED designation, yet they use it. ARGH! BL Lac objects are another type of AGN in which the active jet is likely pointed nearly directly at us but feeding far more slowly than a quasar\'s black hole. Google the term for more information.

In the lower left corner right at the bottom edge is the galaxy cluster, MaxBCG J175.27433+15.14893 with a photographic redshift distance of 2.8 billion light-years. The galaxy at its center is SDSS J114105.83+150856.2 with no redshift listed but the same position within a fraction of a second of arc. The cluster is said to have 21 members but no size was given. So I marked it as GC/G with a question mark for the galaxy\'s distance.

The bright stars in the image are somewhat distorted due to tube currents caused by severely dropping temperatures this night. My notes indicate a 10C (18F) degree drop in the 1:43 time needed for this image. This also caused a rather large shift in image scale with the last images being 0.0025\" larger per pixel. This might not sound like much but across 2004 pixels that is a 5 pixel difference! Fortunately this is something Registar handles easily. The temperature drop ruined seeing as well so the image is rather fuzzy overall. Another for the proverbial reshoot list. 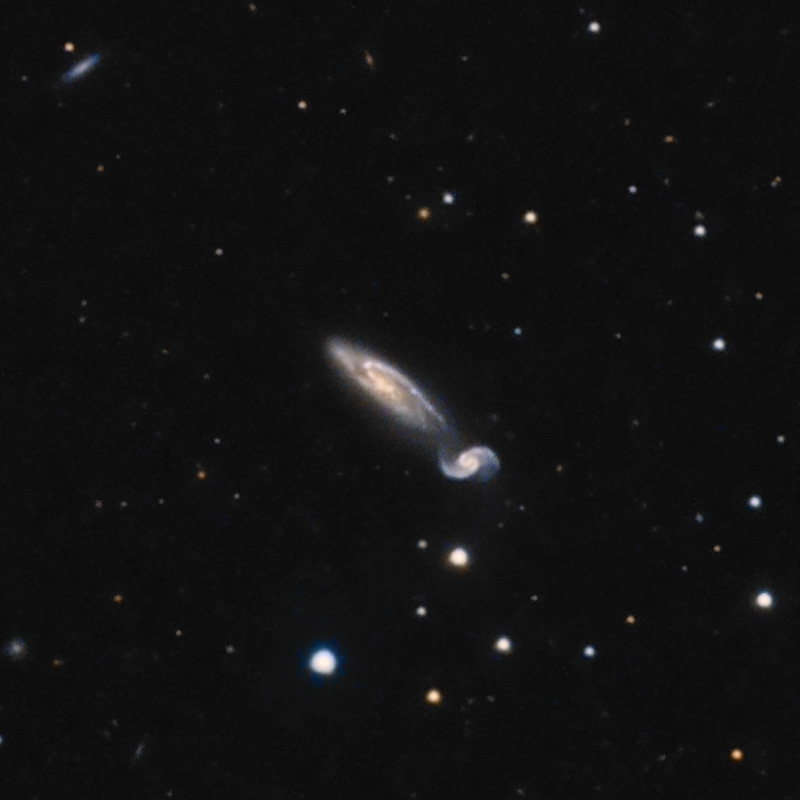 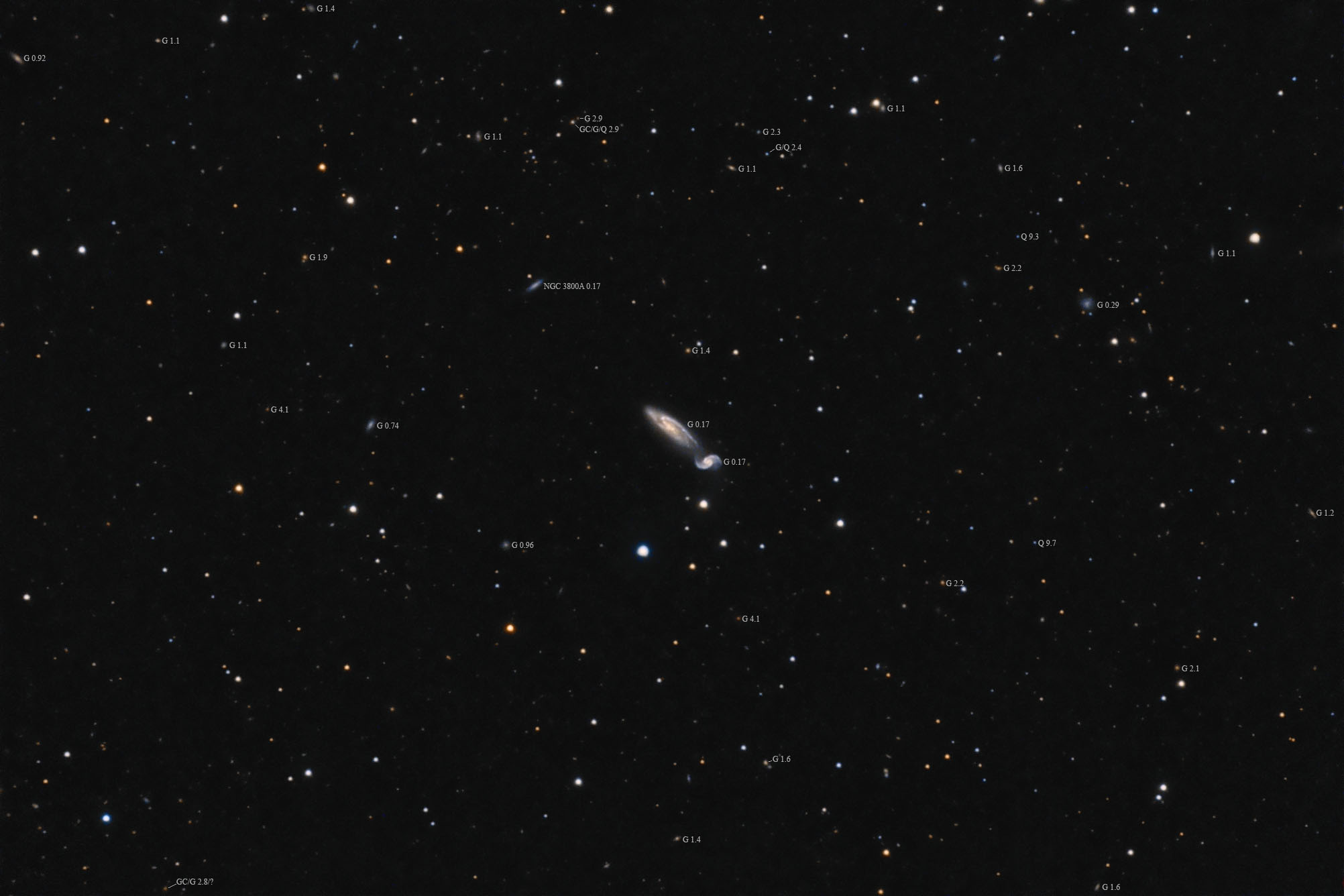 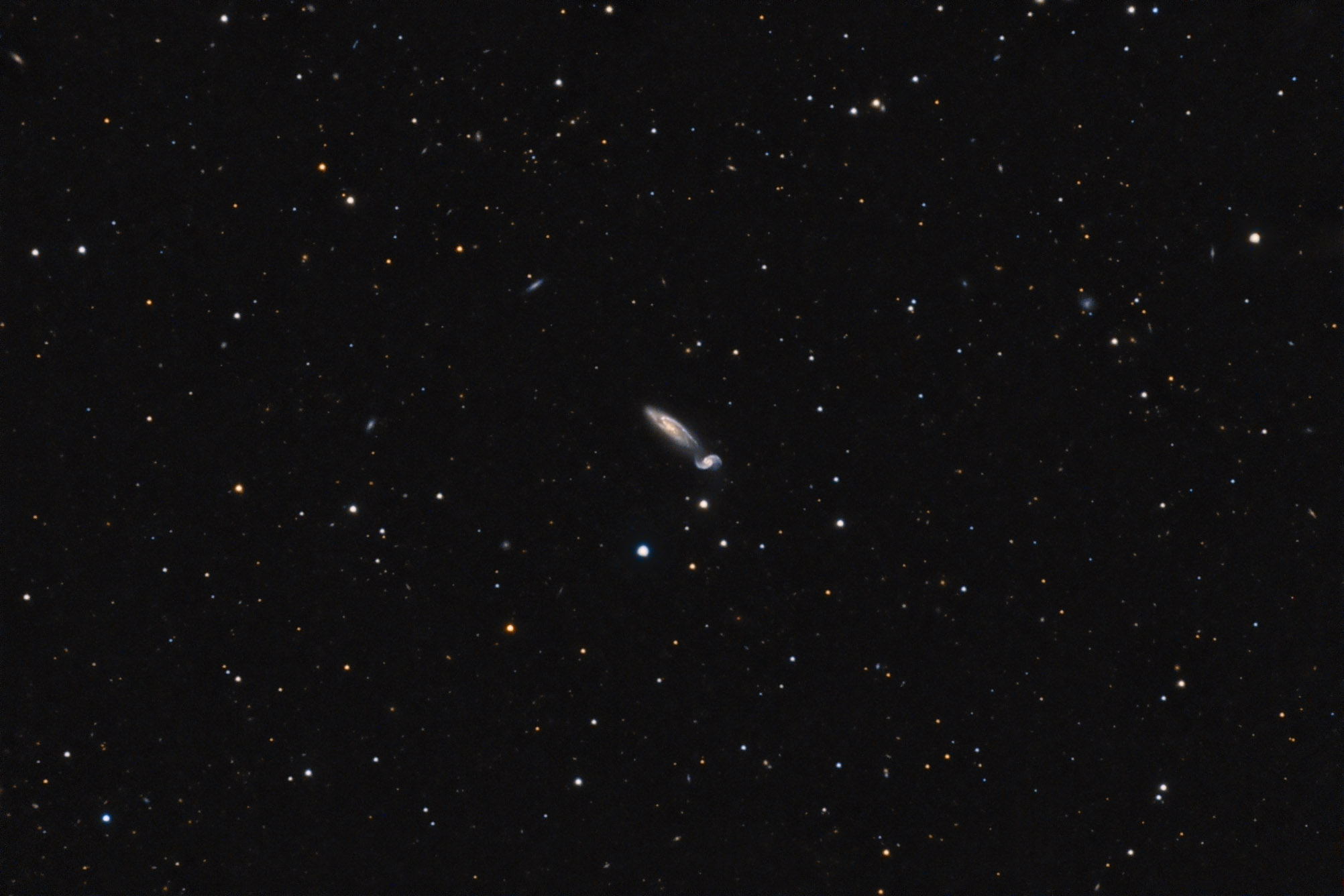