Arp 91/NGC 5953-4 is a well-studied pair of interacting galaxies in Serpens Caput about 100 million light-years distant. Arp put them in his category for Spiral galaxies with high surface brightness companions on arms. He made the comment: \"Broad peculiar arm to companion, then absorption; faint extension from companion.\" This appears to refer to the odd band of stars coming from the south end of NGC 5954 (left) and going to NGC 5953 but suddenly appearing to be cut off. I have to wonder if NGC 5953 is slightly in the foreground and its dust suddenly blocks the light from this star stream. In the SDSS image, it may be faintly seen reappearing after passing behind the densest part of NGC 5953. The SDSS image with its three IR channels shows very reddened dust or maybe population 1 stars right where the stream appears to end. I didn\'t see this color in my image. Unfortunately, seeing was 3.5\" when I took my image so it is pretty fuzzy and low resolution. It is on my reshoot list if the weather will ever cooperate. The last part of Arp\'s comment likely refers to the huge tidal cloud of stars about NGC 5953. I assume 5953 is the \"companion\" and the funny star stream the \"arm\" it is on.

I find references to NGC 5953 calling it an elliptical appearing galaxy, an S0 galaxy and very recent references saying it is SAa: pec;LINER;Sy2. Usually, a galaxy is either LINER or Seyfert 2, but this has references saying one or the other. One trying to make sense out of this says spectra from each camp is very different with many lines having very different strengths in various spectra leading to this differing classification. In any case, the HST put an end to the debate on its status as elliptical S0 or spiral. It\'s high-resolution image clearly shows it to be a flocculent spiral. I\'d hoped to see some resolution of this but only one rather bright flocculent cloud on the east side shows in my image. It also is the only one to show in the Sloan survey image which is far sharper than mine. So apparently this detail is below my resolution ability even on a good night. Still, I want to try again for it. Arp\'s image does show hints of the flocculent arms which is why I\'d hoped to catch a hint of them. Unfortunately, the only HST images I could find don\'t include the strange star stream talked about above. Apparently, it wasn\'t of interest to whoever requested the data be taken.

NGC 5954 has no major tidal cloud about it, just the stream appearing to head toward NGC 5953. But it certainly is highly distorted. It has several prominent star clouds that are nearly starlike in my image as well as the Sloan image. But they are very blue in the Sloan image while in mine only the northern one is blue. The others are severely reddened. I can\'t explain the difference other than the Sloan image goes into the UV spectrum. That may be contributing to their blue color. Or maybe it was just my lousy seeing which was even worse for color data, especially the red channel. Another reason to reshoot this one. It is classed as SAB(rs)cd: pec Sy2. The core region is elongated in the HST image. Maybe that\'s why it gets a nod to being a barred spiral. I just say it\'s a really messed up spiral.

Both galaxies have intense star formation going on near their cores, likely fed by their interaction. To me, the spiral structure of NGC 5953 is not all that disturbed while that of NGC 5954 is a total mess. This makes me think many of the stars in the cloud about NGC 5953 came from NGC 5954. While it appears the larger and is obviously the spiral in Arp\'s classification the lack of distortion to the core of 5953 makes it more the main spiral with 5954 the \"companion\". It must, at least, have a very dense core region to withstand the tidal effects of their interaction. Something NGC 5954 couldn\'t seem to resist very effectively. Both were discovered by William Herschel on April 17, 1784. Neither are in either Herschel 400 observing program.

Below this pair is very blue galaxy UGC 09902, a SBdm? spiral. While redshift data puts it quite a bit closer the error bar for its true distance certainly makes it possible it is part of the same group as Arp 91 though this isn\'t necessarily the case. In any case, it is an interesting low surface brightness galaxy in its own right.

In the lower right corner is NGC 5951. When I set up the image I didn\'t realize it was there or at least that it was interesting. Thus it ended up cut off. Yet another reason to reshoot this field. It is classed as SBc:. It has a rather odd dark lane that runs off the image. Its redshift puts it about 88 million light-years away. Like UGC 09902 it may or may not be part of the same group as Arp 91. I don\'t really see it as a barred spiral but it is so tilted to our line of sight that may be hidden in my low resolution. I\'d sure like to see it more face on.

NED shows no redshift data for anything else in my image so I\'ve not prepared an annotated image. 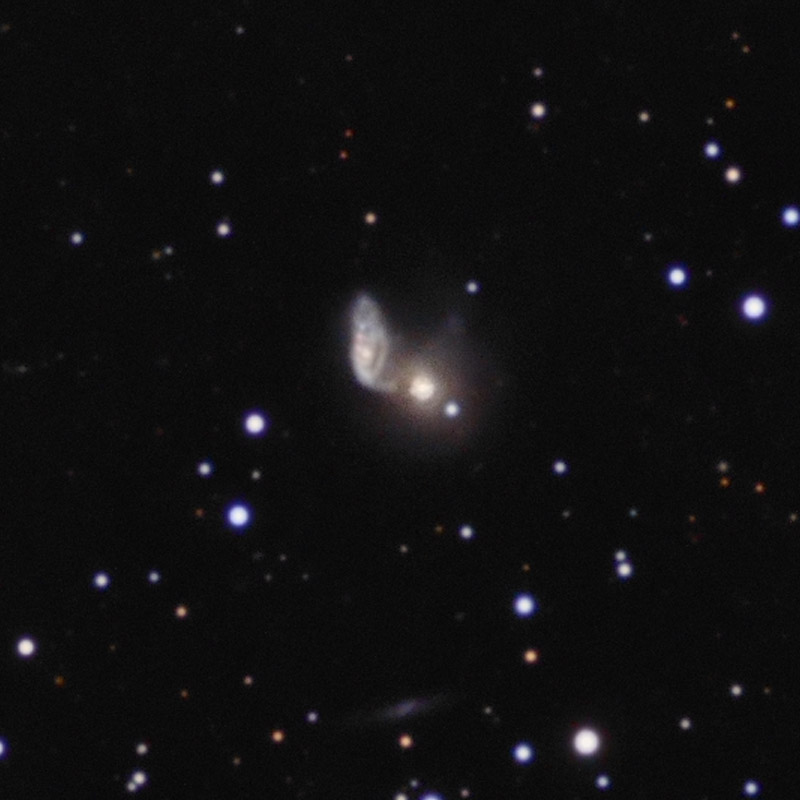 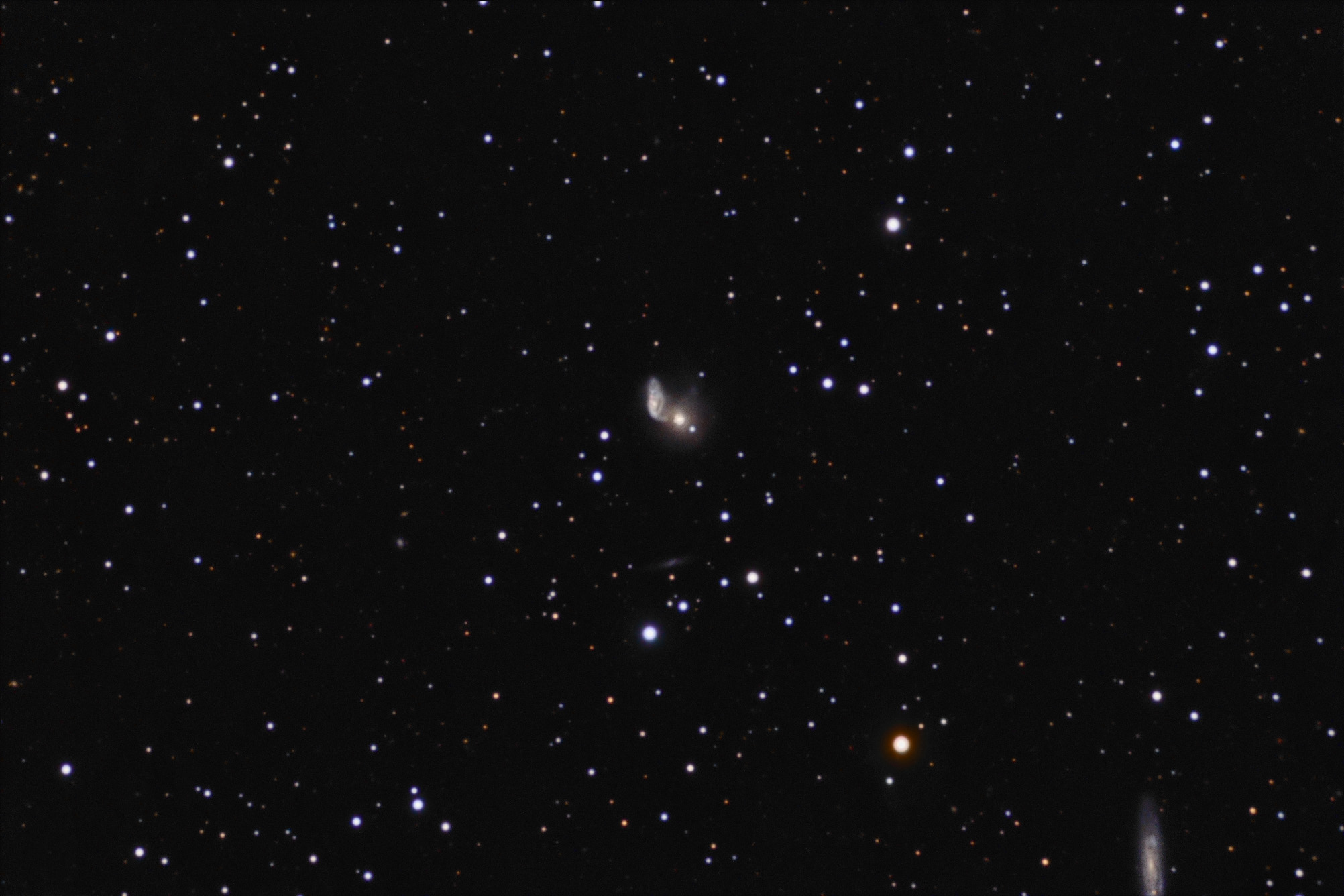 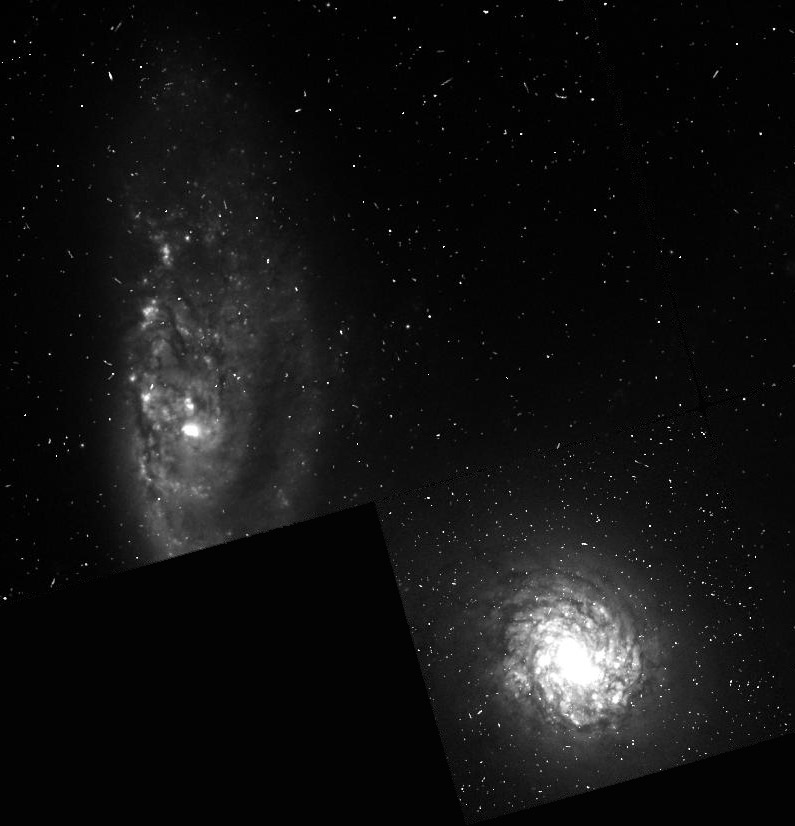