Arp 94 is listed under Arp\'s category for spiral galaxies with elliptical galaxies on a arm. It is located less than a degree east of Gamma Leonis so is very easy to find and is about 68 million light-years away. It consists of two \"big and bright\" interacting galaxies; NGC 3226 to the north and 3227 to the south. The pair is quite easily seen in my 10\" scope and likely a 6\" should so them as well. Besides being in Arp\'s list they are also in the Herschel 400 list, another list I\'m slowly trying to image so this one kills two birds with one image.

William Herschel found them on February 14, 1784. My log from April 15, 1985 on a night reduced to fair by humidity using my 10\" f/5 scope at up to 150x reads for NGC 3226: \"Small, round galaxy with little detail and poorly defined nucleus, nearly overlapped by NGC 3227.\" My entry for NGC 3227 reads: \"Larger oval (than 3226), nearly featureless galaxy with somewhat central region. Seems to extend into 3226 as already mentioned.\" Apparently, I didn\'t realize I was looking at plumes caused by their interaction. Arp\'s comment reads:\" Comp. on edge of large, very faint loop extending opposite galaxy. Light line E-W is plate defect.\"

There are several other galaxies in the image at about the same distance as Arp 94. All are far smaller, however. NGC 3226 is classed as E2 pec by NED and simply E by the NGC project. It has an AGN at its heart and is classed as both a LINER and Seyfert 3 galaxy. NGC 3227 is classed SAB(s) pec by NED and simply Sb by the NGC project. It is a Seyfert 1.5 galaxy so also has an AGN at its core. So one sees it as a barred spiral and the other as having no bar. I see it as a mess. The motor oil colored dust patch on its west side would seem to indicate a lot of its dust and gas is being ripped from it by the interaction. If they merge a large elliptical galaxy will likely result.

This is a reshoot. I\'d hoped to pick up more of its plumes but didn\'t go much deeper this time than before. This one needs a far better night than I had the two nights I shot it this time. I wasn\'t happy with the first round and wanted a lot more time on it. But the skies were rather uncooperative. I only got twice the data under poor skies. Still, I think it came out better than the first time with half the data but not by a lot. The difference may be more in improved processing skills as the stacked FITS look very similar. Unfortunately, they were framed rather differently and I\'d lose too much of the field if I combined the data so just used the new data.

Edit: With my skills of today I could redo this using the best of both images. Not having time for that right now I\'m just including both versions. The later version has more detail in the core of the galaxies but loses the plume detail.

In the annotated image there is one other NGC galaxy, NGC 3222. It too has very different classifications. NED says SB0 while the NGC project says E-S0. It is located 4 times further away than Arp 94. It was discovered by August Winnecke in March of 1855. Below it is a group of galaxies at 540-550 million light-years. It contains two other interacting galaxies that Arp missed at the lower right: NPM1G +20.0234 is on the right and seems rather normal while SDSS J102247.38+194730.2 on the left has a huge plume. Quite a few galaxies are in the area that have no redshift data. I presume at least some of these are also members of this group. While the group seems obvious NED shows no group at this location. There are 5 groups in the image that NED does mention, however. All much further away.

You will see a quasar marked with a question mark southeast of Arp 94. NED says it is a star or a galaxy but shows it as a point source with a redshift of 11.6 billion light-years light travel time. There\'s no way I\'d pick up a star or galaxy at that distance. So I went against authority and marked it as a quasar but added the question mark to indicate there\'s a question about this one.

There are some other objects marked with a question mark as well but no identification. I\'m certain all are galaxies as I looked at each one on the Sloan Survey images to verify they were real. I did this because NED doesn\'t list them. Likely many others deserve a question mark, these are just the ones I looked at to find redshift data and found not only no redshift data but no galaxy either! About 21% of those I checked were missing yet NED shows over 3000 objects in this image. I don\'t know why these were omitted. I\'m used to finding one and one time 2 missing from NED this way but 4 is a record. There are likely more as my sample size was only 19. The one due west of NGC 3226 is one of a pair of galaxies. The fainter one is listed but with no redshift. The brighter is totally missing. Below it and a bit east is another pair, a bit further apart. Again the faint one made NED the brighter did not. There was another pair in which the fainter member wasn\'t listed but even after consulting the Sloan image I was uncertain if it was a star or galaxy. It is among a group of 6 galaxies (5 if it is a star) all overlapping making identification difficult. Look for the galaxy at 2.4 billion light-years southeast of NGC 3222. It is orange with a small object beside it on the east. In the Sloan image, it is several galaxies plus this object. A couple of the galaxies are seen in my image but most just add to the fuzz around it. 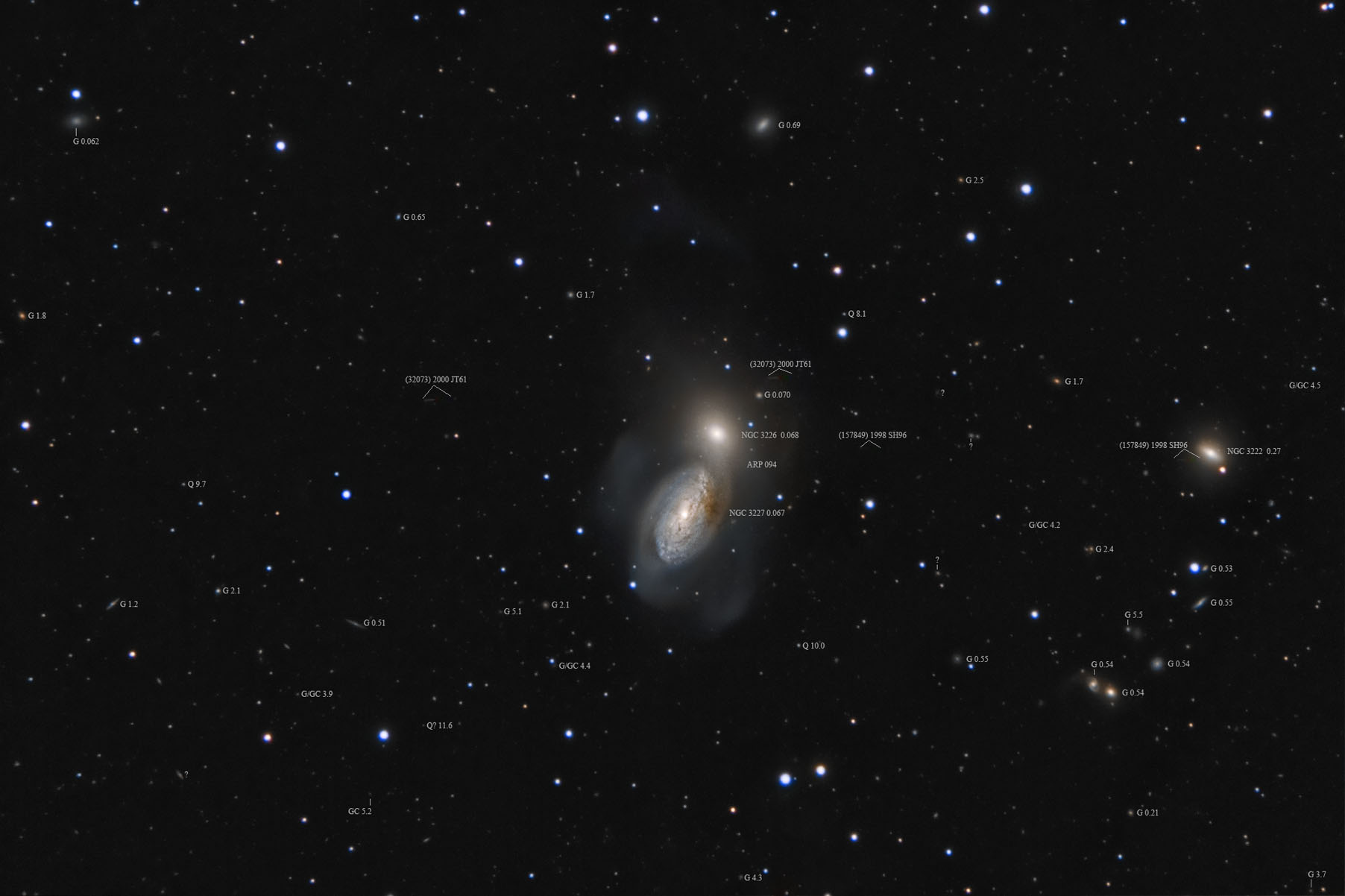 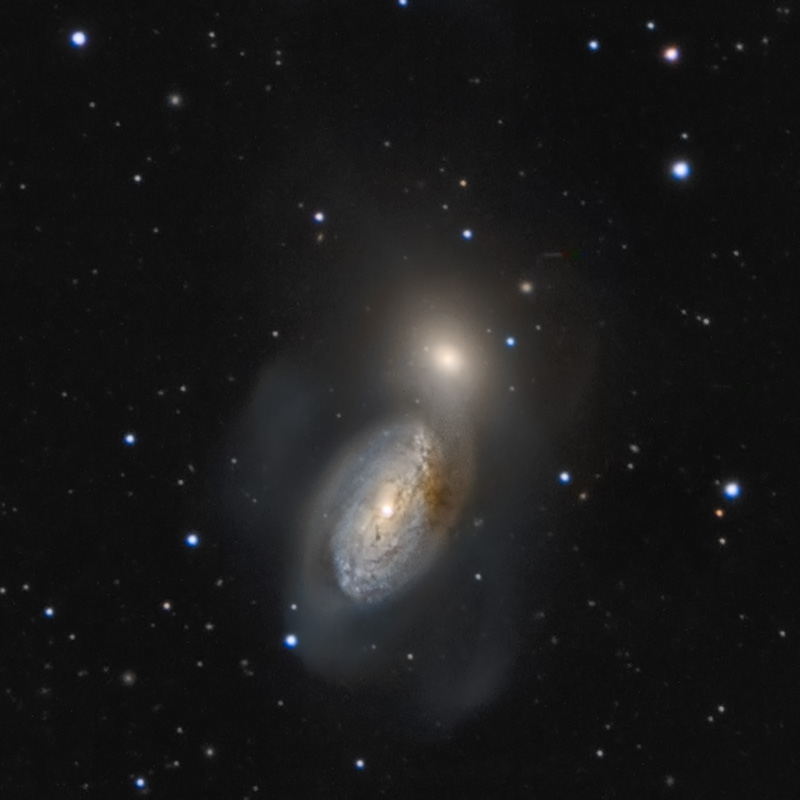 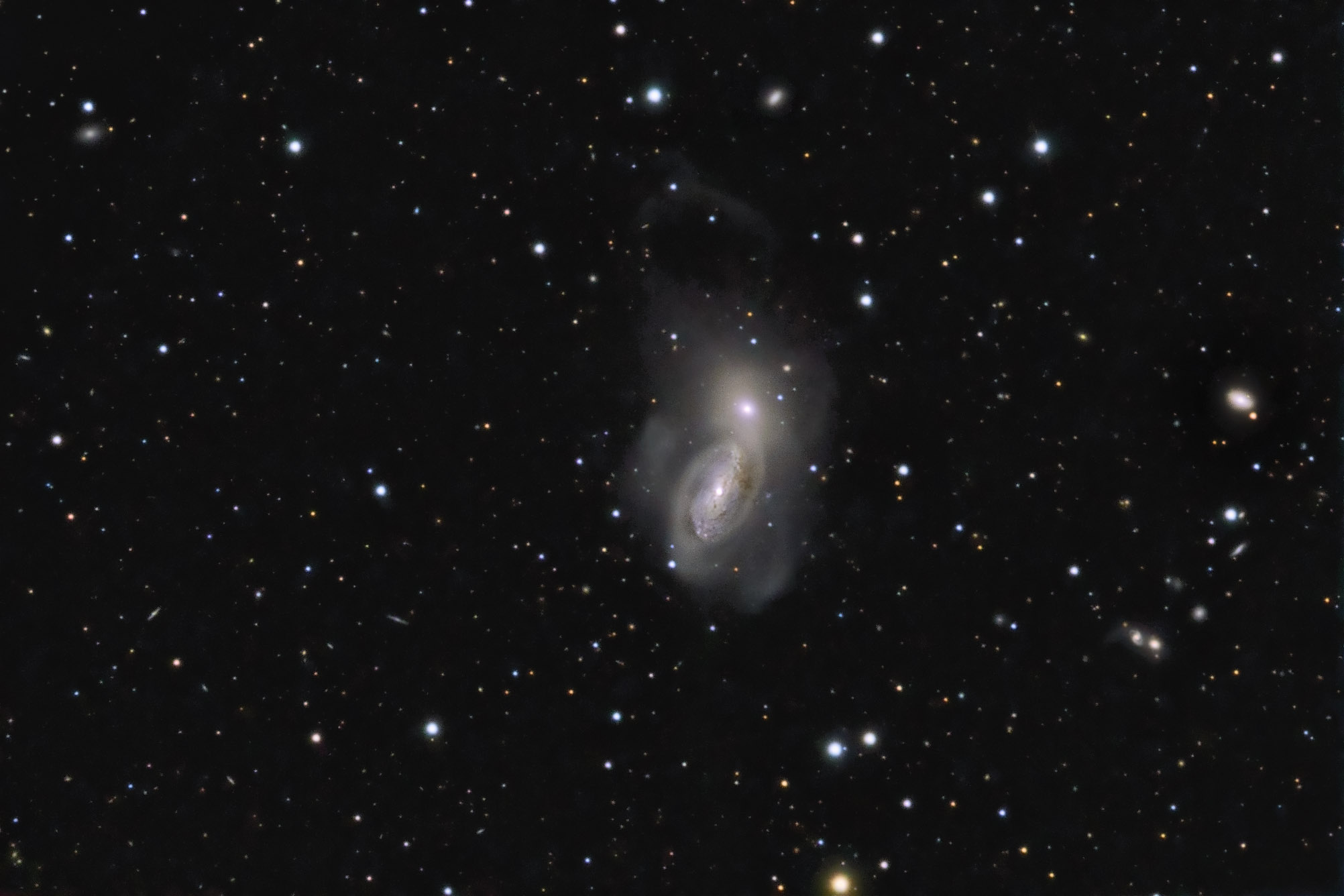