Arp 97 is classed by Arp as \"Spiral galaxies with companion on arms: elliptical galaxy companions\". This double galaxy has only a single designation UGC7085A. Oddly UGC 7085 is 22 degrees south of this pair and in no way related. There must be an interesting story here but I don\'t know it. The pair is about 330 million light years away so getting much detail is rather difficult. The southern galaxy has two bright arms obviously tidally extended and straightened. The north arm extends over the northern galaxy. Its yellow color contrasting to the blue of the overlaying arm. Note though that the lower galaxy seems to have a third arm running nearly due east. Well a tidal feature heads east, sort of toward the very blue galaxy MCG+05-29-012. Its distance is 353 million light years. Close enough that it too may be involved though I found no papers indicating this and it doesn\'t show any sign of distortion. It may be this \"arm\" is just an entirely separate object, probably much closer than the two making up Arp 97 but so faint it isn\'t seen over the galaxy. It shows in the SDSS image so is real.

To the west is SDSS J120531.04+310434.1, another very blue galaxy that seems to have a hole in the middle of it. I wish seeing was better, it could be due to unresolved arms and nothing more. I can find no redshift data for it. To the upper left of Arp 97 over halfway to the upper edge is a rather red disk galaxy. After all the blue ones it stands out. Its red color made me wonder if it was surprisingly far away. Since I was finding little red shift data in this area I didn\'t hold out much hope but I got a pleasant surprise. It is SDSS J120609.43+311002.8 and is 1.08 billion light years distant. It must be one huge spiral! Between it and a very bright star to its upper right is another very blue galaxy. It is CGO151 at about 400 million light years, too far to be related to Arp 97.

Things get rather interesting toward the NW (upper right). There\'s a quartet of rather interesting galaxies up there. The big one seen face-on is UGC 07064, an SAB(r) Seyfert galaxy. It is described as \"no spiral structure with smooth disk\" by one paper I found on it. There seems to be a nice ring around the faint bar and on the east side (left) a faint arm seems to spiral out and around in a clockwise direction ending at a field star. There also appears to be a tidal bulge to the disk on the west side. A faint linear plume appears to extend off the top of it toward the northeast passing just under the double galaxy. It is 353 million light years distant per its red shift the same as MCG+05-29-012 east of Arp 97. Below it is the odd spiral CGCG 158-10 at 373 million light years. A blue field star at its south end makes determining what is going on here difficult but I do see faint tidal distortions. One on the NE side going up to UGC 07064, the other on the west side going down. North of UGC 07064 is CGCG 158-011 A pair of galaxies. They appear to be interacting but I can find no redshift data on them so can\'t tell if they are related to either each other or the other two galaxies.

I moved Arp 97 east from center to include these 4 galaxies in the full frame. 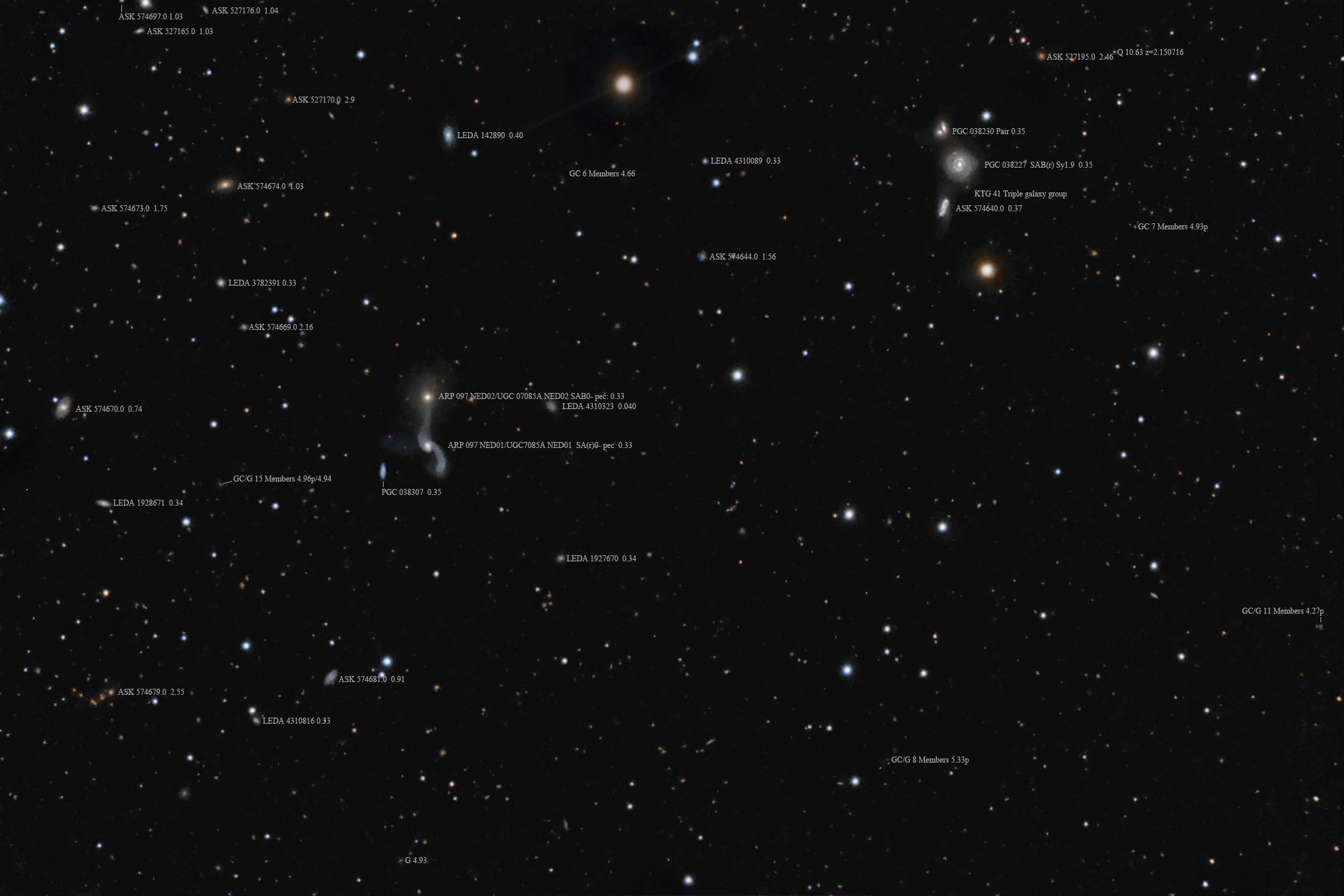 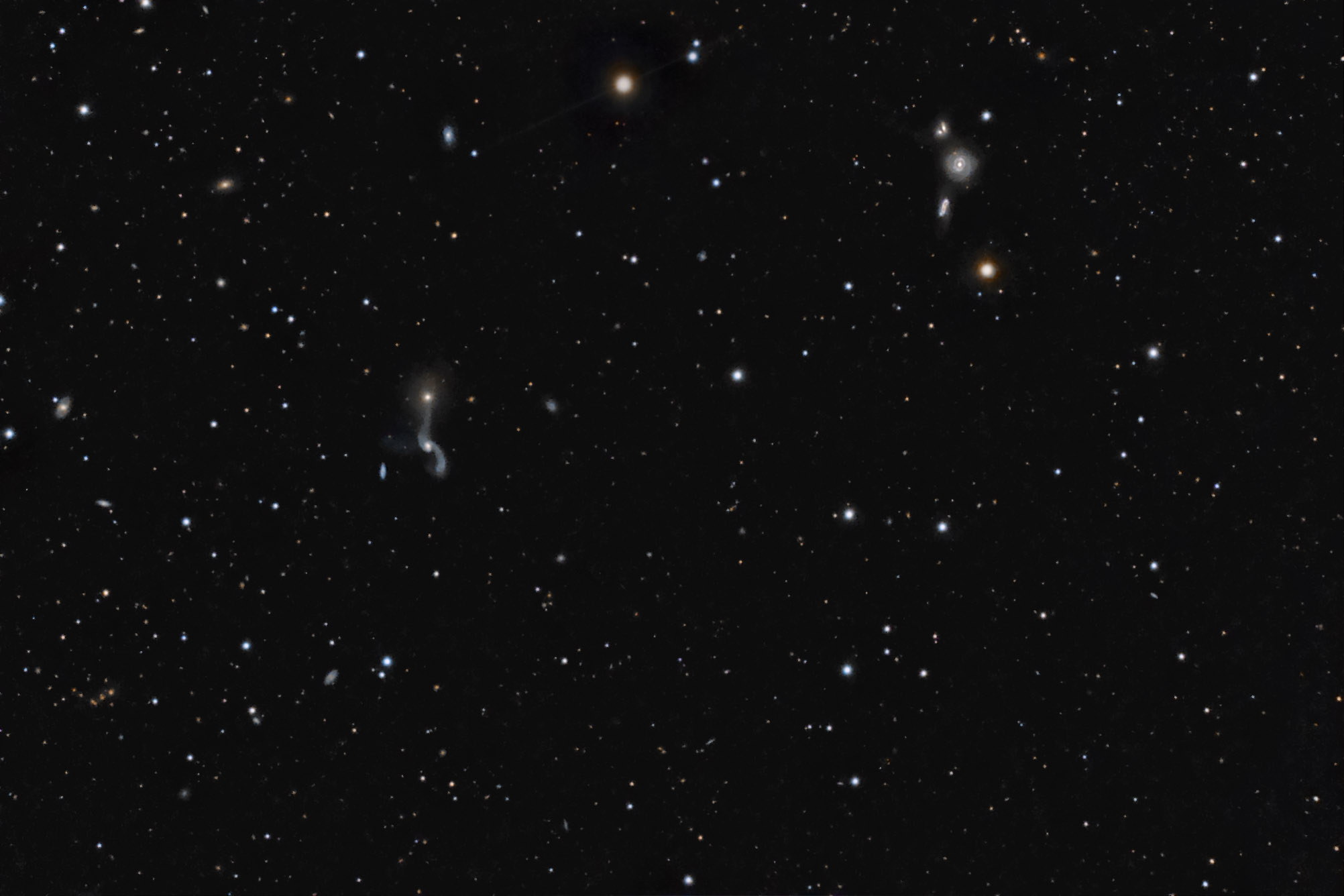