Arp 104 is Keenan\'s System made up of NGC 5216 (south, bottom) and NGC 5218 north. Classed by Arp under \"Elliptical and elliptical-like Galaxies: Connected to Spirals\" Yep, that sure fits this pair. One note describes the pair saying \"Distorted spiral with an S0 companion, well separated but with a connecting arm. North (spiral) is NGC 5218, which has no bright nucleus.\" Yes, that poor spiral did take a potent hit from this interaction.

There\'s confusion about which galaxy is which. Here\'s the NGC Project on this issue: \"NGC 5216 and NGC 5218. The MCG identifications are reversed from those by all other observers. There is no apparent reason for this in the NGC itself, and I doubt that Vorontsov or his colleagues consulted JH\'s 1833 catalogue where there is an identification error. For the record, Sir John makes his h 1635 a \"nova\" while he incorrectly labels h 1636 as H II 841. Sir William\'s original observation was of two objects which became H II 841 and H II 842. Sir John got the identifications sorted out for the GC, and the NGC has them exactly correct, too.

So, the MCG is the only catalogue which reverses the identifications. All the other modern catalogues are correct in placing N5216 south-preceding N5218.\"
- Dr. Harold G. Corwin, Jr.\"

NED puts the pair at 153 million light-years but puts NGC 5216 at only 140 million light-years E0 pec, and 5218 at 139 million light-years SBb pec and as a LINER galaxy as well. The interaction has apparently triggered the activity needed to create a LINER status for the galaxy. Both were discovered by William Herschel on March 19, 1790. Like many Arp galaxies he found, neither are in either of the Herschel 400 observing programs.

The lower galaxy, NGC 5216, reminds me of Arp 165 which was an elliptical galaxy with a faint blue arm but no sign of any galaxy it had interacted with. NGC 5216 is very similar but this time we know the culprit.

MaxBCG J202.88728+62.64181 BCG at 2.63 BLY is the anchor galaxy of the galaxy cluster of the same name (without BCG at the end). it consists of some 28 members many of which show in my image as orange dots around this galaxy to the lower left of the lower Arp 104 galaxy. The color contrast with the quasar below it is very strong.

The Q? above NGC 5218 denotes a possible QSO candidate per NED. Though its status is rather indeterminate. It is classed as SDSS J133038.56+625508.8, a galaxy in the Sloan Digital Sky Survey and GALEX, an ultraviolet orbiting observatory classes it as GALEX 2685493392111045227 Berk 27 w/txtan ultraviolet excess source which isn\'t surprising considering its blue color. The US Naval Observatory has it classed as VisS which just means it is an unknown object visible in ordinary light. I found no distant estimate for it.

In the upper left corner is a somewhat blue double galaxy. At least it has two condensations. Oddly I can find no cataloged object at its location. In fact, there\'s nothing of its brightness cataloged within several minutes of arc of this location. Yet the area is covered by the SDSS. I checked the POSS II plates and it is a real object. How the pros let this one get away I don\'t know. Edit: Since this was written NED now picks it up as GALEXASC J133417.73+625742.8 an Uv Source. The Galex satellites resolution was likely insufficient to see it as two objects. Even the position has 3x larger error bars than most objects in NED. Unfortunately, that\'s about all it tells me. SDSS image shows what appears to be two merging, very blue galaxies assuming they are at the same distance which appears quite possible.

It is located in Ursa Major above the Big Dipper\'s handle right at the boundary with Draco not far from Thuban. 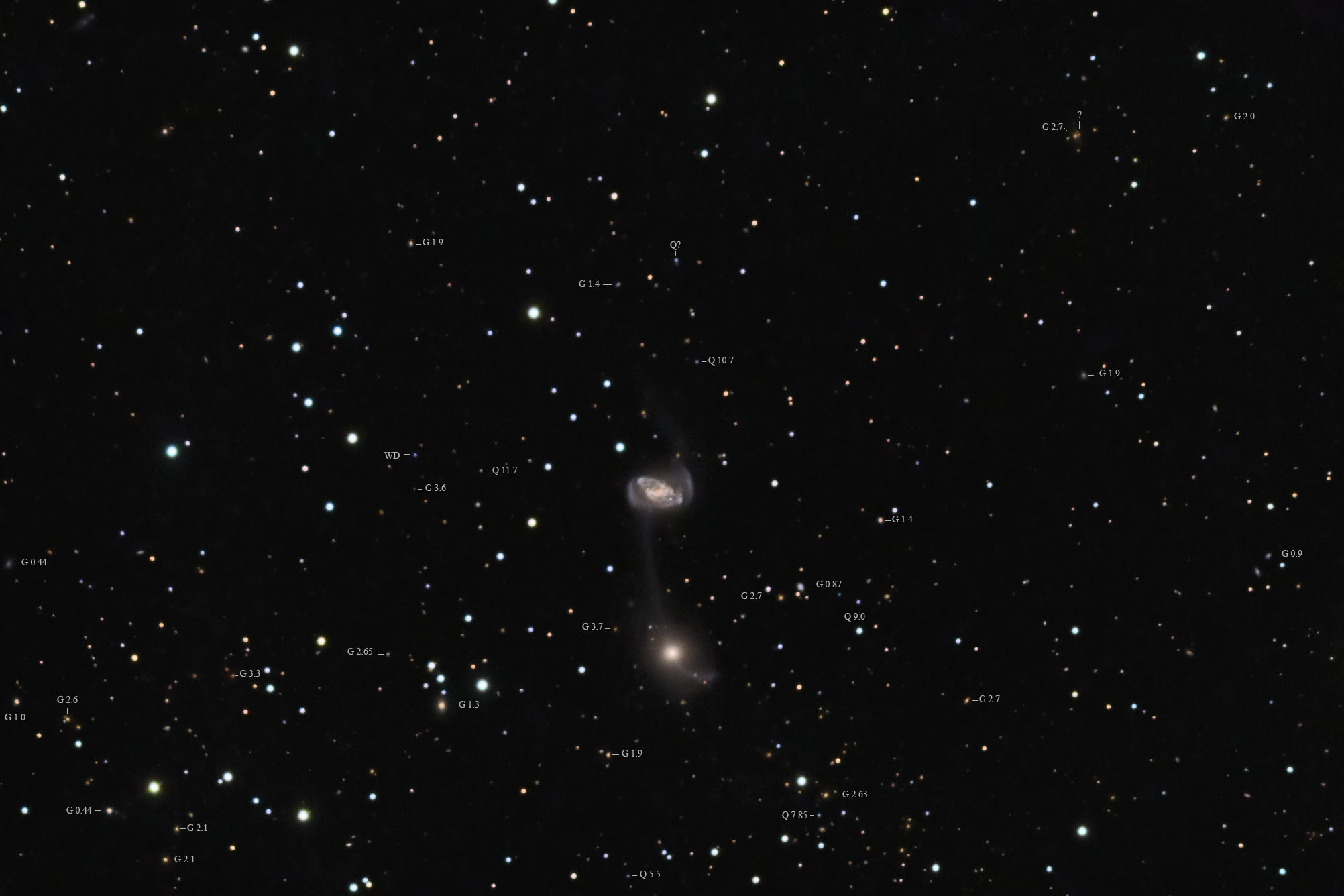 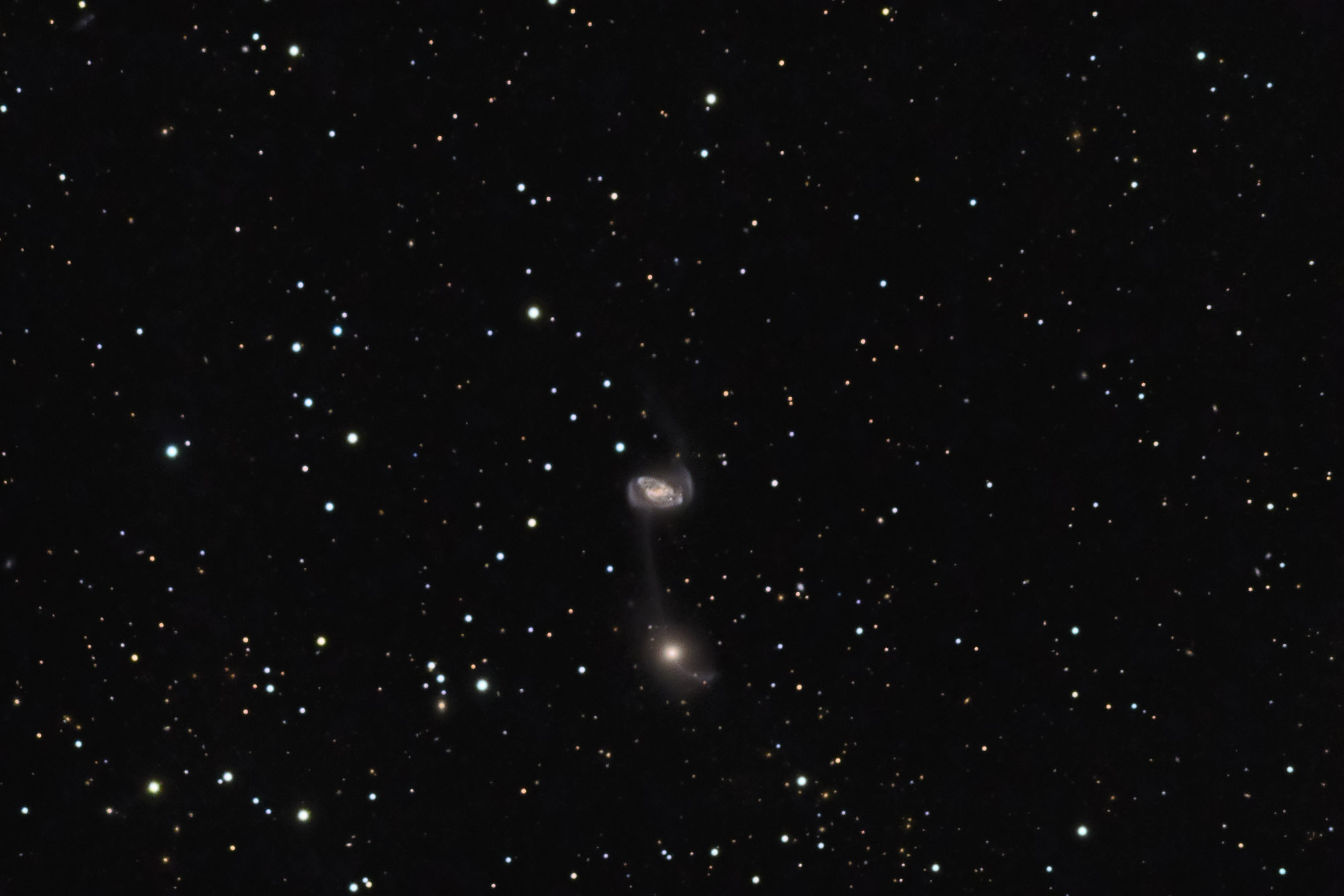