Arp 109 is in Arp\'s class for \"E and E-like galaxies repelling spiral arms\", a class that never has made sense to me. If it has spiral arms isn\'t it a spiral galaxy? What is a \"repelling spiral arm?\" In any case, it includes two galaxies, one a true elliptical to the east and a very strange disturbed spiral to the west. It seems to have two plumes both curving to the west. Were these plumes created by interaction with its large companion? The companion shows no sign of distortion. Could the outer plume be due to the remains of a small galaxy the western member is digesting? I found nothing to help with this issue.

The pair are about a half billion light-years away in the constellation of Draco, just below the bowl of the little dipper. The pair have almost identical redshifts so it\'s highly likely they are really about this close to each other as they appear to be. The eastern member is classed as E:. The western member is classed as S?. The pair is UGC 10053 and VV291. The VV says of them: \"Hard core 0.15 x 0.15 surrounded by thin bright spiral arc, 2 diffuse spiral arcs is unequal bending in northwest\". The CGPG says: \"Irregular blue spiral, compact elliptical core, two spiral arms to the west\". The VV does say it has been probably perturbed by the companion. Arp had no comment on this one. The spiral is classified as S? by NED and Sab? by Seligman. The elliptical is E: at NED and e3: by Seligman.

The rest of the field for which redshift information is available is rather sparse, with only 5 in NED. To the west is a LEDA 2730634 also at a half billion light-years so probably related to the pair in Arp 109. The others are all closer to us. MCG +12-15-020, a lenticular galaxy at about 350 million light-years is to the southeast. Further south is IC 1146 at a redshift 360 million light-years. Likely the two are related. NED shows no classification for it though Seligman says S. Looks like Sa to me. Near the top is CGCG 338-022 at nearly 460 million light-years. NED classes it as spherical. Looks like a disk galaxy to me with a hint of a bar and an arm. The remaining galaxy is IC 1147 to the far east and a bit north. It is quite red for a barred spiral though NED makes no attempt to classify it for some reason. Seligman says S but I\'d say SB(r)a as it has a ring structure from arms coming from a bar. It is listed at about 470 million light years so about the same distance as CGCG 338-022. IC 1146 and IC 1147 were discovered on July 13, 1887 by Edward Swift. 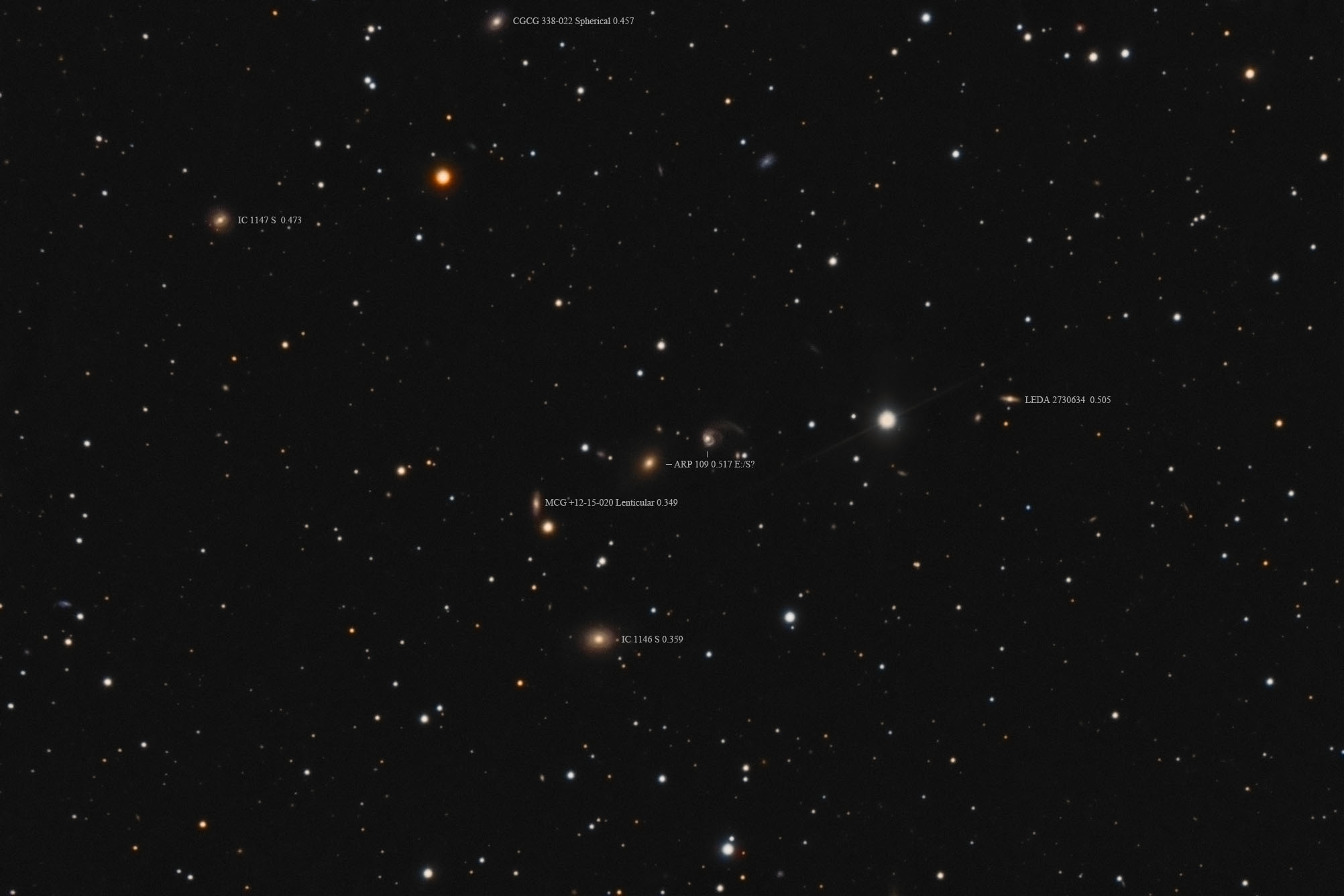 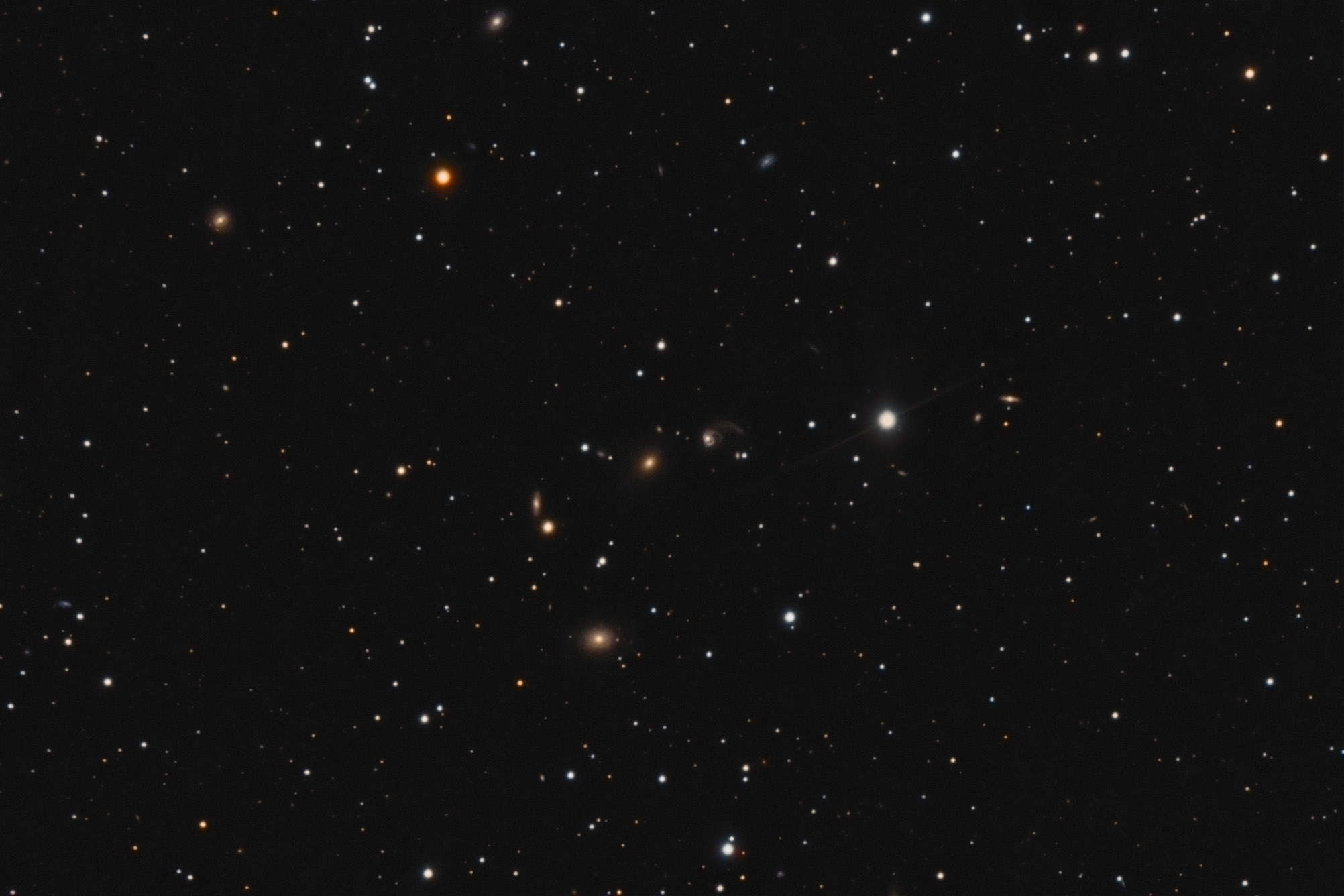 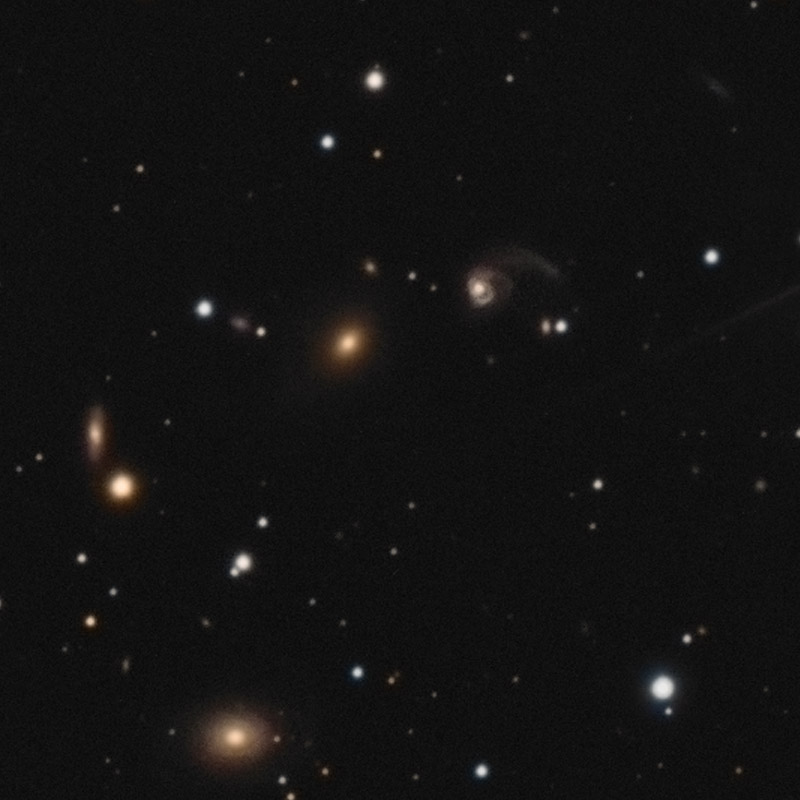