Arp 110 seems to have two tight, short, rather red arms coming from each end of its core. These end in oddities. On the west end, a blue \"arm\" suddenly bends back that is far larger than the red arm at its base. Is it really the same arm or some star stream due to an interaction with the companion? The red east arm that runs to the east side of the galaxy ends in a huge blue amorphous region that includes a couple star clouds. Again the same question applies. Makes me wonder if much of the blue is due to stripping of dust and gas from the companion leaving only its core coupled with a similar stripping of Arp 110 as well. Only a guess on my part. I find nothing useful either way in the literature. This one hasn\'t been studied much or I didn\'t find it.

It does appear the two may be interacting. There\'s a faint spray of stars all around the companion extending out past the two stars on the western side of it. Dick Miller\'s web page on this one suggests the knot at the east end of the galaxy could be a barred spiral. http://www.338arps.com/arp_110.htm He didn\'t have the advantage of a color image. It appears to be a blue knot in what passes for a arm. I hadn\'t seen his comment but looking at my raw data as it came in I thought it likely a separate galaxy but once the color data was assembled it turned into a star cloud in the arm.

This area is not covered by the Sloan survey so we don\'t have help from that source. NED lists mostly APMUKS galaxies, the result of an automated plate survey which picks up only obvious galaxies and says nothing about the blue object. In fact, few galaxies in my image have much useful data at all. There is no distance data for the probable companion since a plate survey can\'t collect the needed information.

The galaxy southwest of Arp 110 is MCG-03-58-010/PGC 69950. Its redshift puts it at about the same distance as Arp 110. I find no classification for it. It is the only other galaxy in the image with distance data. There are a few very faint asteroids in the image the eagle eye\'s out there might spot. I make an annotated image to help you find them.

This one is just below my -15 degree cut off which reduces my transparency. I should have put more time into it to compensate but the following nights had too poor seeing that low. I never did get the needed time. 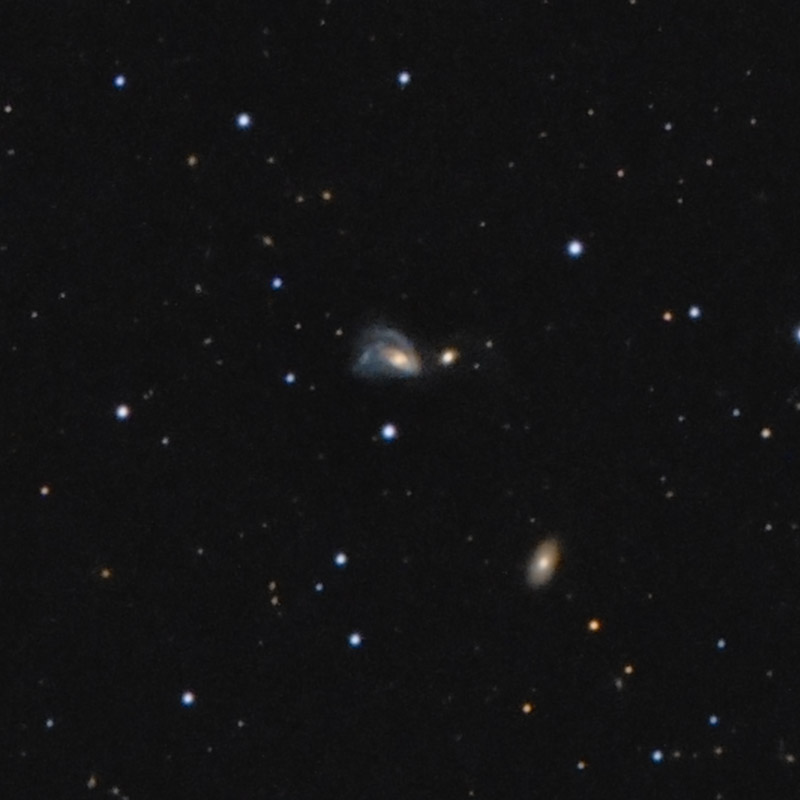 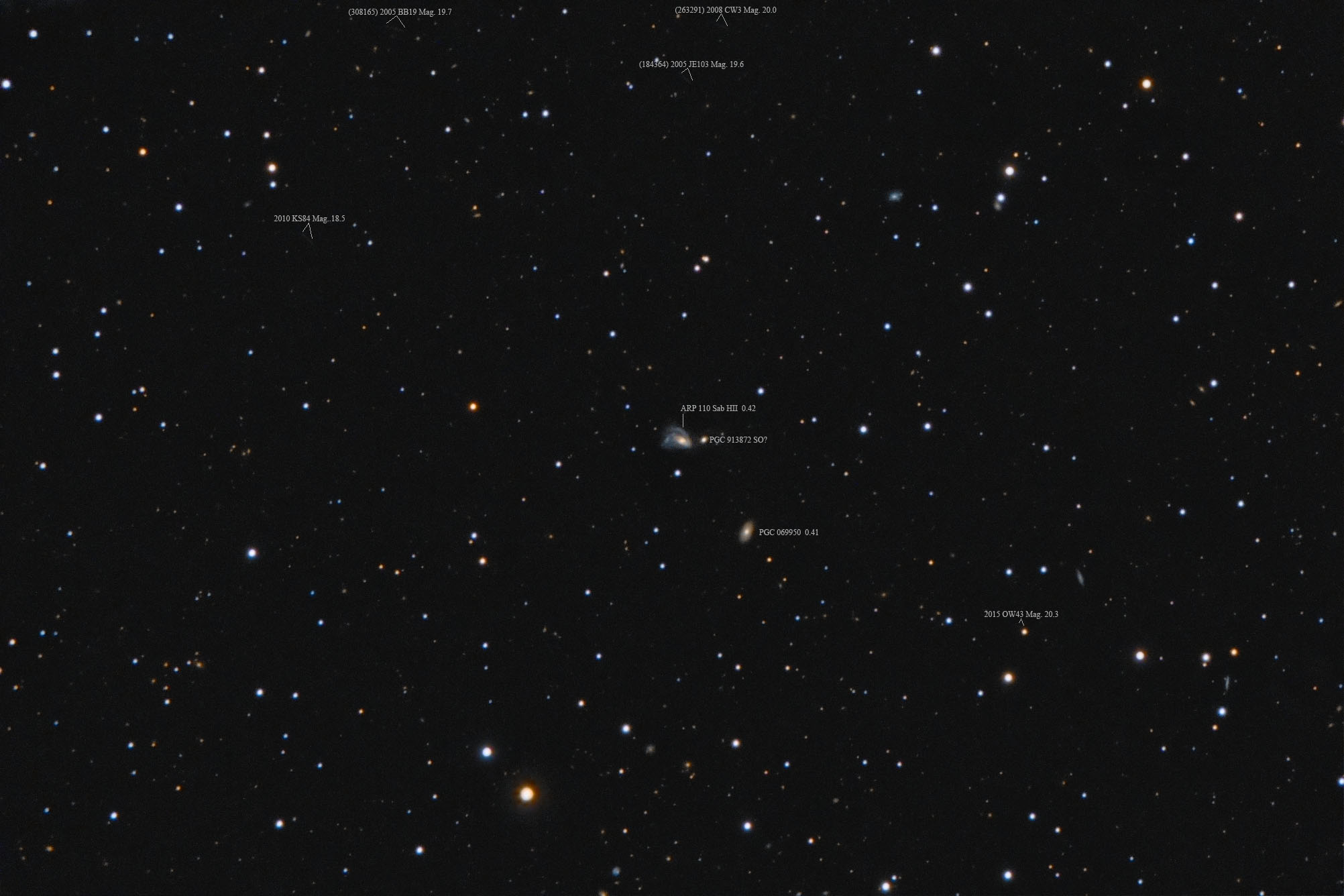 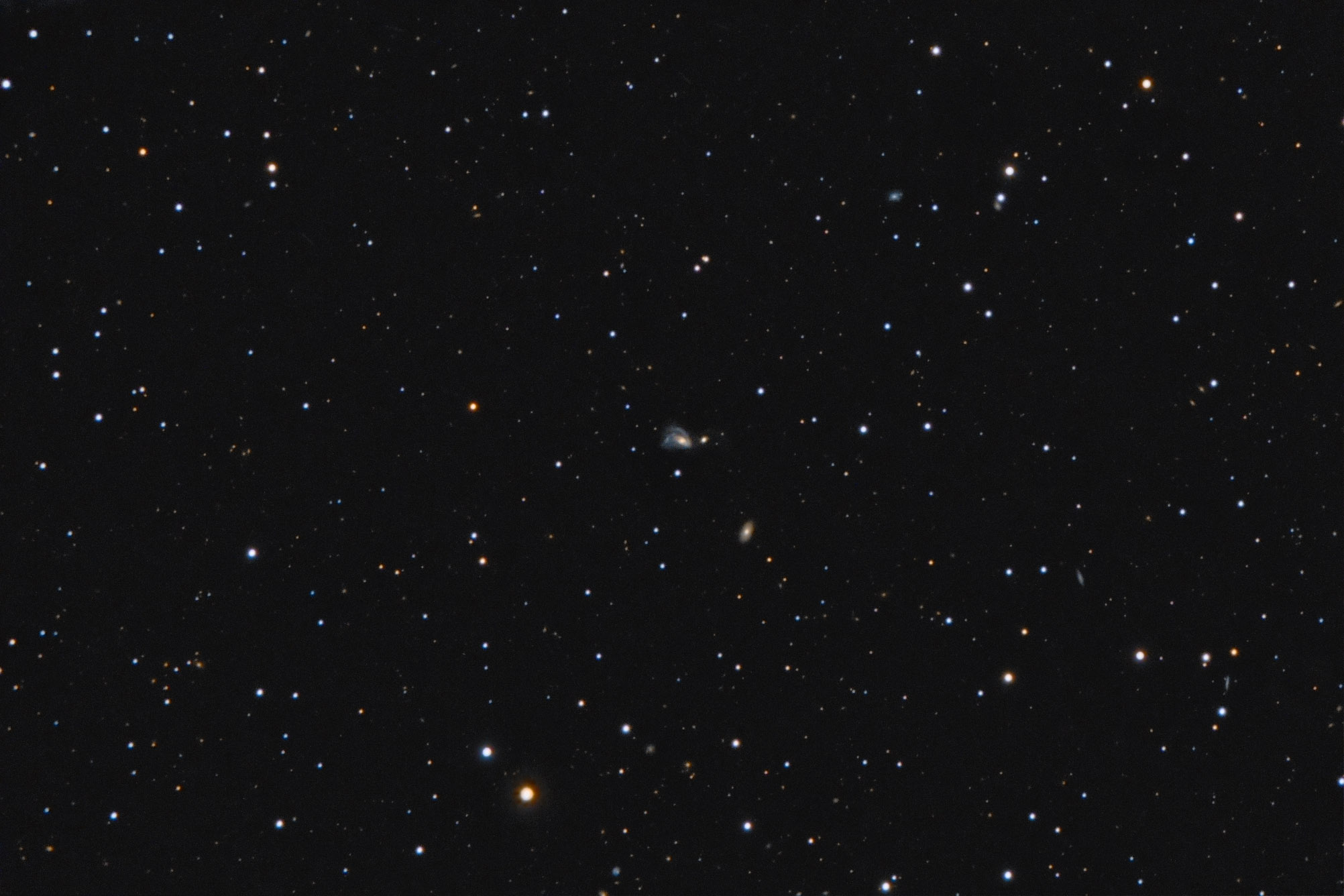