Arp 115/UGC 6678 is a triple galaxy about 440 million light-years distant located in the very northeast corner of Leo. Arp put it in his category of elliptical or elliptical-like galaxy close to and perturbing a spiral galaxy. In this case, there are two elliptical galaxies and a very odd spiral. The spiral, UGC 6678 is classed as Sb. I find it peculiar but it doesn\'t carry the peculiar designation. Though whether the two ellipticals have anything to do with it seems debatable. These three are part of a much larger group at the same distance. Some of which are in shown in my annotated image. Others extend north and south out of my image.

UGC 6678 (the blue spiral) may have grown due to chowing down on many dwarf galaxies in the group resulting in its current somewhat odd shape. Or it might be due to interaction with some of the others in the group. The one to the northwest corner of the enlarged cropped image is a possibility as it is rather peculiar itself. It is KUG 1140+266/LEDA 1772579. Neither \"elliptical\" seems the least distorted. They haven\'t even distorted each other though appear on top of one another. Arp\'s comment on the pair of ellipticals reads: \"Object slightly S of northern gal. is just perceptibly nonstellar.\" This would indicate it wasn\'t cataloged at the time of Arp\'s catalog. The small one is classed as S0 rather than elliptical which appears reasonable to me. NED doesn\'t classify the larger galaxy. Looks more like a barred spiral to me than an elliptical. That isn\'t seen in Arp\'s image, however. It is also known as PGC 036379 and several other designations. The small S0, however, has no separate designation other than that of one of the other two and a secondary letter or other designation.

In the annotated image you will note several families of galaxies inhabit the field. The largest group is that of Arp 115 but others reside at 1 billion light-years at the top center, 1.7 to 1.8 billion light-years across the field and 1.3 to 1.4 across the field. Only a handful don\'t fit one of these groups. There is one galaxy cluster whose position matches that of a galaxy. The cluster, MaxBCG J175.78981+26.45578, is said to be 3.3 billion light-years distant and contains 14 galaxies across an unknown radius. One possible member is south of it right beside a second, slightly brighter galaxy. Oddly the brighter one not only has no redshift data, it isn\'t in NED at all! Usually, it is rather large, low surface brightness, blue spirals that get this disrespect but this time its a tiny dim reddened galaxy of indeterminable type.

You\'ve probably noticed the right side of the image is out of focus. This is another image taken when the camera\'s set screws had worked loose. Most nights it would hold position but on warmer nights it would fall away on one side causing this problem. Likely a few more of these as I didn\'t catch the problem for some time. I have to look at the data soon after it is taken rather than months later. 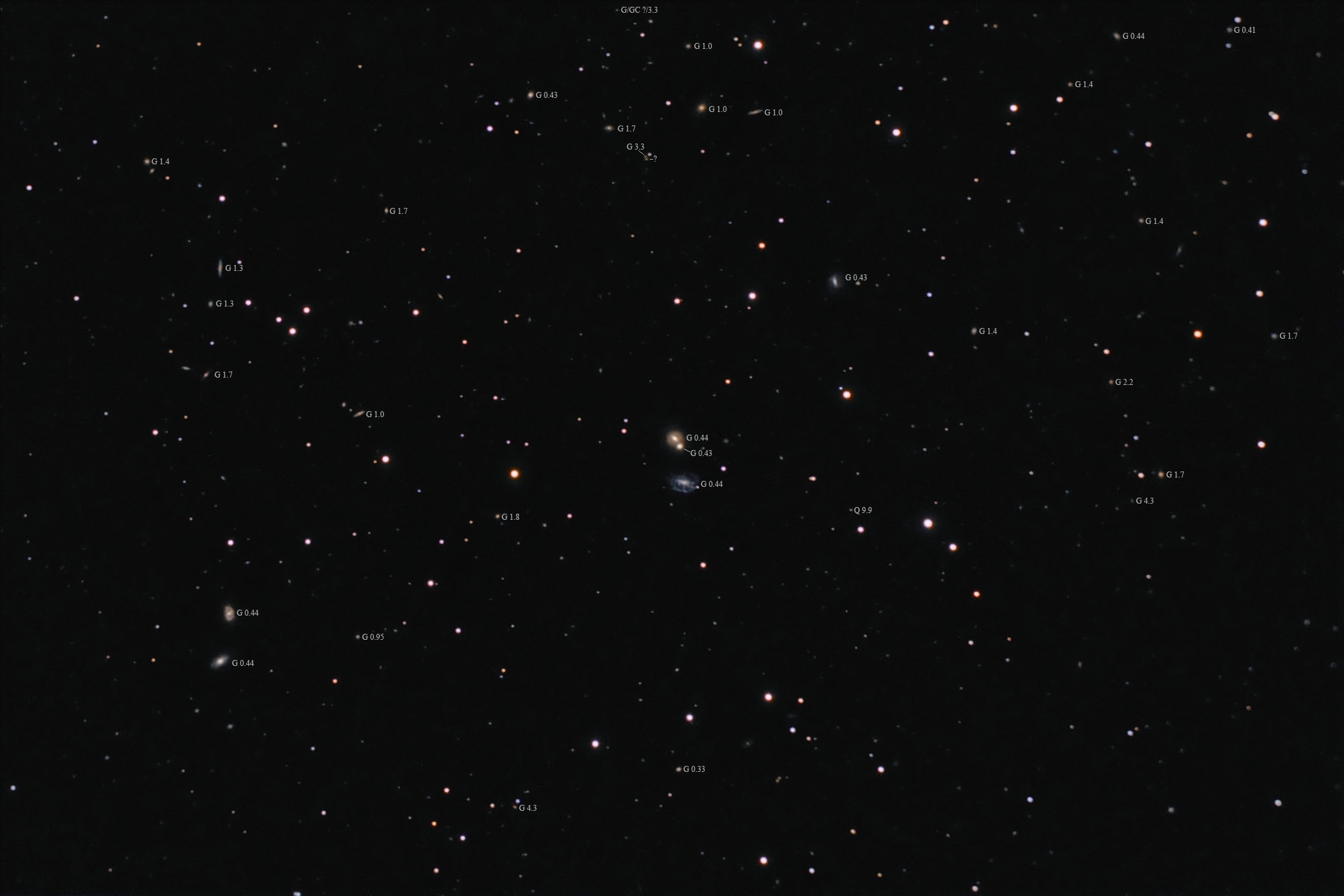 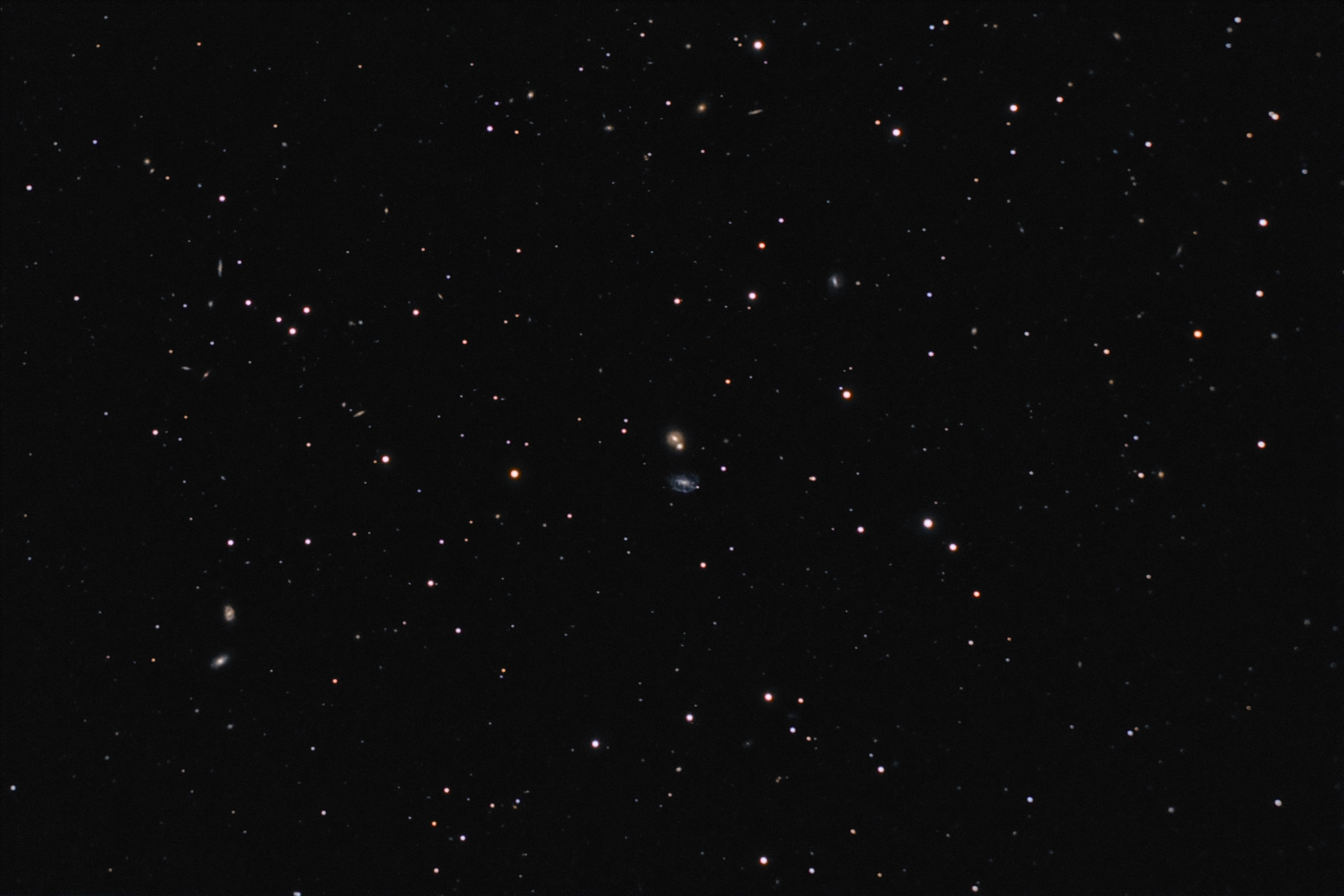