Arp 123 is in the Arp class \"Elliptical or elliptical-like galaxies; close to and perturbing spirals\". In this case, the spiral is NGC 1888 and the elliptical is NGC 1889. At first look, there doesn\'t appear to be much distortion. Usually, we expect to see the distortion on the side of the companion but that doesn\'t have to be the case. Here it is on the opposite side and takes the form of a large, faint blue halo of new massive blue stars. I looked at several papers on this pair but none were concerned with how the interaction would only throw out mostly new hot blue stars leaving the old population of stars mostly unchanged. Was there a lot of gas in this area and the interaction triggered the star formation? If so why aren\'t they in clusters? There\'s no sign of dust, just the stars. I found it odd that no one was much interested in this. Maybe it isn\'t a puzzle to them but it sure is to me. The pair is about 115 million light-years away.

The papers did have this to say: \"Liu & Kennicutt (1995) state NGC 1888 to be a spiral of the type Sa or Sb with dominant old stellar population and only weak line emission.\" Yet another paper says; \"With NGC 1888, forms = Arp 123 an interacting pair at 0.3 arcmin, consisting of a large Sc with faint outer arms and a small E0 in contact.\" I doubt that means actual contact, just apparent contact. I see no evidence of an actual collision.

The other galaxy of any size is toward the upper left corner, northeast of Arp 123. It is MCG -02-14-015 a flat galaxy (FGC 0534) also at 115 million light years. With the same distance, it must also be a very close neighbor to Arp 123. NED classes it as S0 which seems strange for a flat galaxy though it does have a central bulge most flat galaxies lack. Those are usually white to yellow, often elongated spindle-shaped galaxies with little to no dust or gas and consisting of old stars indicating star formation ceased billions of years ago. Yet this galaxy has the typical blue arms of an edge on spiral. On the other hand, it has no dust lane as you\'d expect with an S0 galaxy. One paper I found says it is \"an anonymous Sc galaxy\" in a paper on Arp 123. Only a very few other galaxies have been cataloged in this image. They are strong emitters of IR radiation and thus in the 2MASS catalog of IR sources. No visual or redshift data is available on them, however.

This galaxy pair is located in Lepus the rabbit, near the border with Orion. Down that low, my seeing is never very good though was somewhat better than average for its declination. Still, the image is not what I would like. NGC 1888 was discovered by William Herschel on January 31, 1785 but isn\'t in either of the Herschel 400 observing programs. He didn\'t see NGC 1889 as a separate object so its discovery didn\'t happen until Bindon Stoney recorded it on October 29, 1851.

It appears his seeing wasn\'t much better than mine. Though the poor dynamic range of film caused him to lose a lot of detail in the galaxies while exposing long enough to pick up the blue halo. Today\'s digital sensors don\'t have this limitation. Though I again put a bright star on the edge of the chip. Difficult if you try but apparently very easy to do if you don\'t. 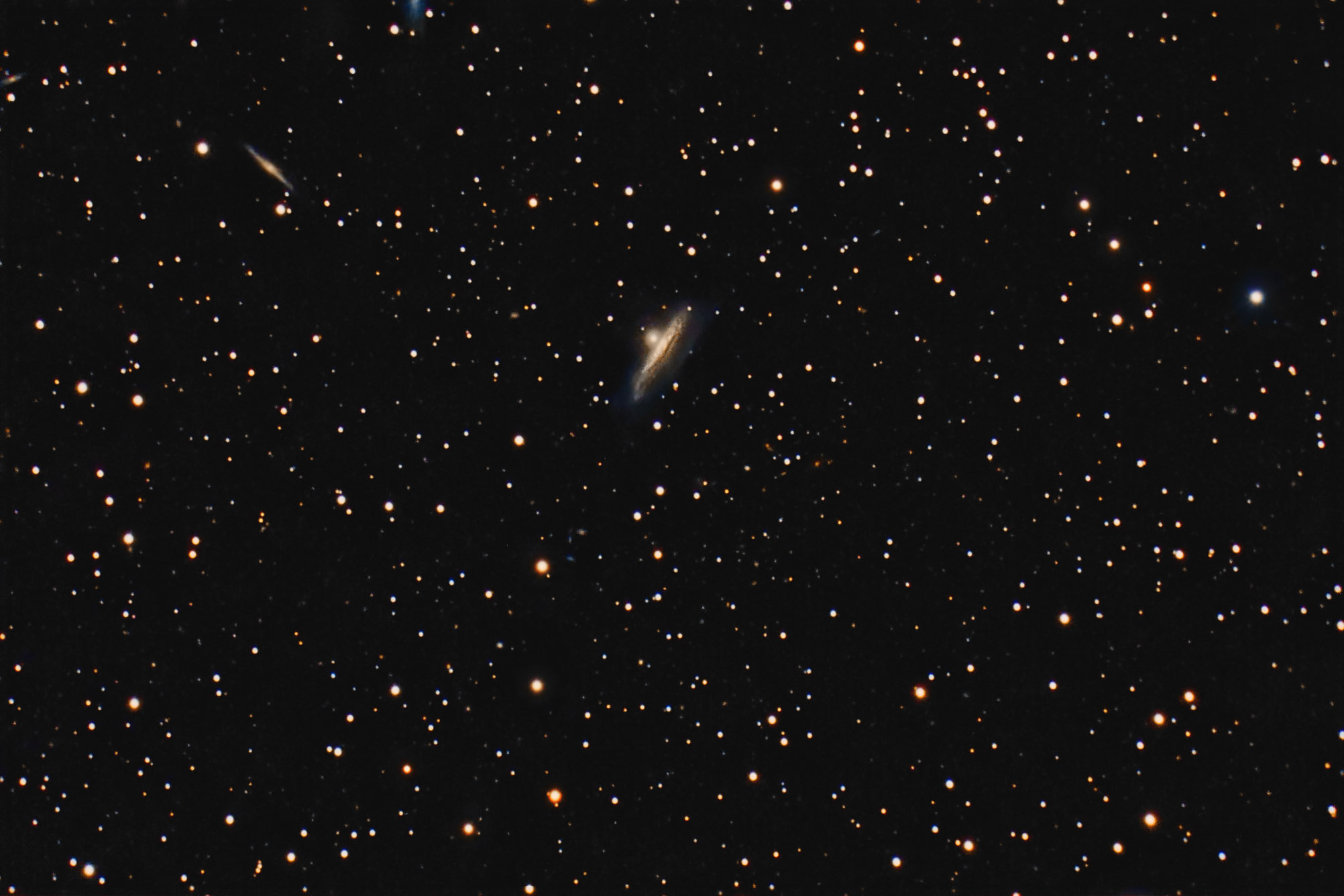