How many galaxies are involved here depends on who you listen to. One says the upper system consists of 4 galaxies in one envelope! Another says two while NED indicates one. The southern system seems to consist of three, two of which are rather red. Though again NED considers only the brightest as part of Arp 125. One note at NED says of this entire system: \"Comet-shaped object 1.1 x 0.45 interacting with small triple system south.\"

The northern galaxy NED sees as Arp 125 NED 1 is UGC 10491 NED01 classed simply as S pec. The southern one is UGC 10491 NED02 and is classed as S0 pec with a ring morphology. I don\'t see that at all. I could see that applying to the upper galaxy, however. Things are about to get more confusing.

The northern galaxy is very red in color with a blue \"head\". The red color doesn\'t match that of other red galaxies in the image. To me, it looks more like the red of dust than population II stars. Certainly, a dust lane is very red. I found nothing on this, however. The blue head is listed as a separate galaxy SDSS J163815.16+415605.3. With no redshift or other distance data available that I could find I have no idea if it is part of the system, just a line of sight galaxy or a star knot in the upper galaxy. Since Arp 142 is almost identical and that one the blue is considered a star cloud in the galaxy I have to think that most likely the case here. Still, the issue is far from settled as far as I can tell.

Things get more complicated with the southern \"trio\". While the note quoted above sees it as three galaxies and it appears that is the case in my image, though Arp\'s image is ambiguous, NED lists the other two as stars. I wish I knew how this was determined. SDSS shows two of the brightenings in the northern galaxy as stars, neither of which appear starlike in my or Arp\'s image. One is about halfway between the nucleus of the upper galaxy and the blue \"comet head\". To find the other note the red dust lane above and right of the nucleus. Just right of the southern (bottom) end of this lane is a brightening almost as if the dust lane lies over the core and this is a piece of core just beyond the obstructing dust lane. Neither are round. All this leaves me more than a bit confused.

There\'s an interesting pair of elliptical galaxies on the far western edge of the image. As my resolution falls off at the very edge of the image I wish I\'d seen them before taking the image as I\'d have moved the field a few minutes west to get a bit more resolution on them. They appear to be interacting and within one halo or their halo\'s overlap. They are 2MASX J16364865+4153381 and 2MASX J16364668+4153151, left to right. Both have a redshift that puts them at 1.03 billion light-years distant so they are likely an interacting pair. Below them is another similar elliptical of virtually the same redshift.

The most distant galaxy near Arp 125 that I found is SDSS J163806.19+415947.0, a 21.1 magnitude galaxy north of the pair that is 4.1 billion light-years distant. Limiting magnitude on this image as processed is about 23.5 in case you were wondering. The raw (but calibrated) luminosity image goes about a half magnitude fainter.

The blue galaxy identified with a question mark below the inset box has the same position as SDSS J163835.66+414943.2 a galaxy NED shows at a redshift distance of 390 million light-years. Except NED says it is only 1 second of arc across and at 23.5 magnitude! Do they see something on top of the galaxy I show or is there an error here? They show no other galaxy for this location. But it is a type of blue galaxy the SDSS often misses. Trying to determine what is in these images can drive you insane.

Down at the bottom of the image southwest of Arp 125 is the most distant galaxy on the image, hiding behind a star of about the same brightness but appearing far brighter because the light is spread over far less area, is the galaxy 21.4 magnitude galaxy SDSS J163739.94+414546.8 at 5.1 billion light-years. Quasars are farther away but I can\'t image the galaxy they are in, just the accretion disk about the black hole creating the quasar.

The annotated image shows the red shift light travel distance per NED using 5 year WMAP data for all objects for which it was available. 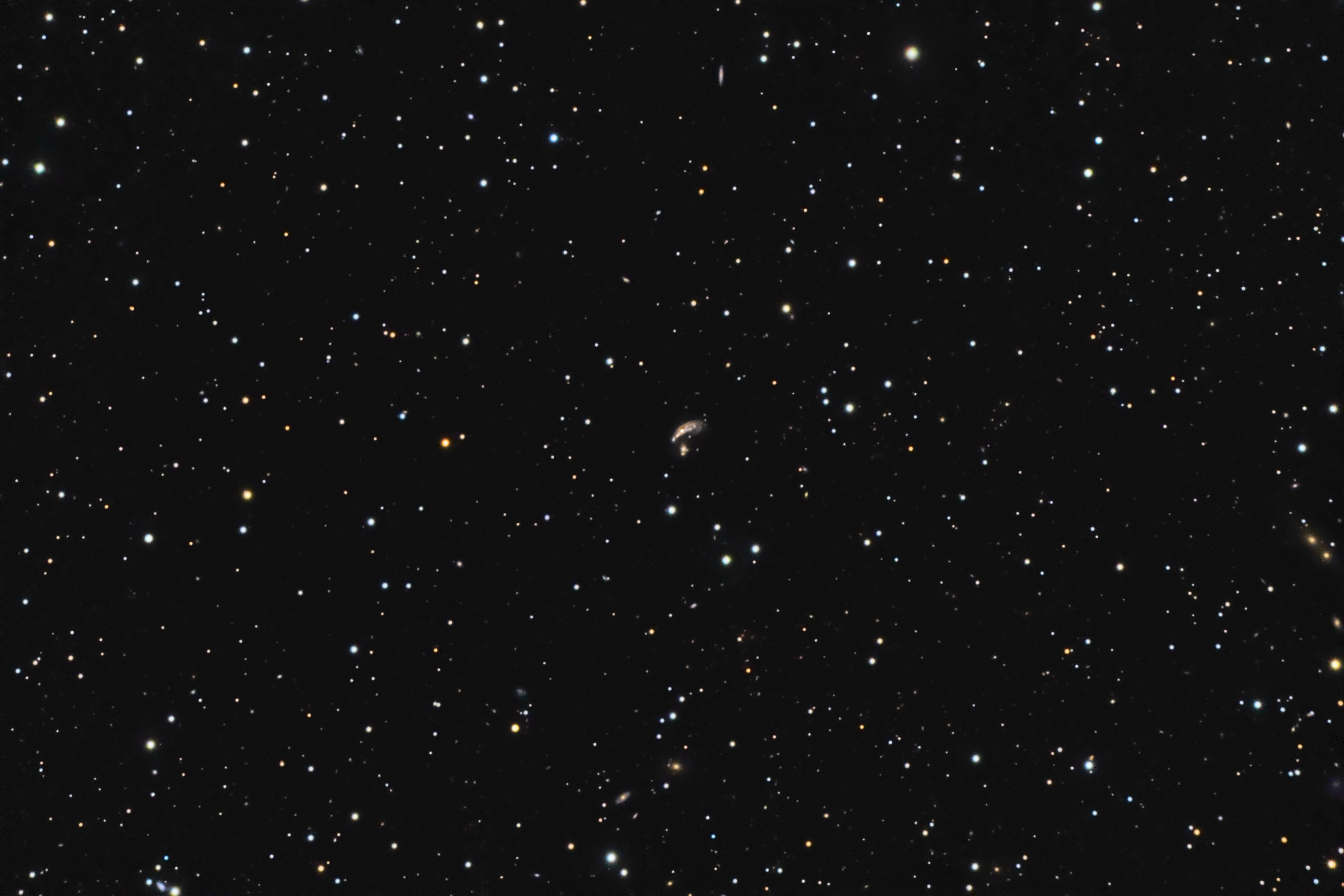 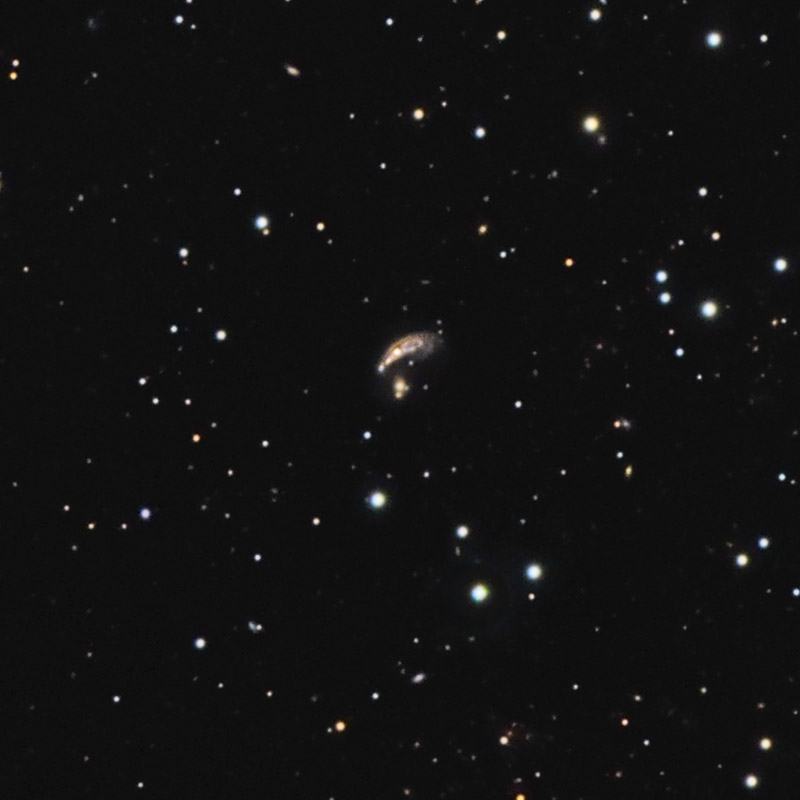 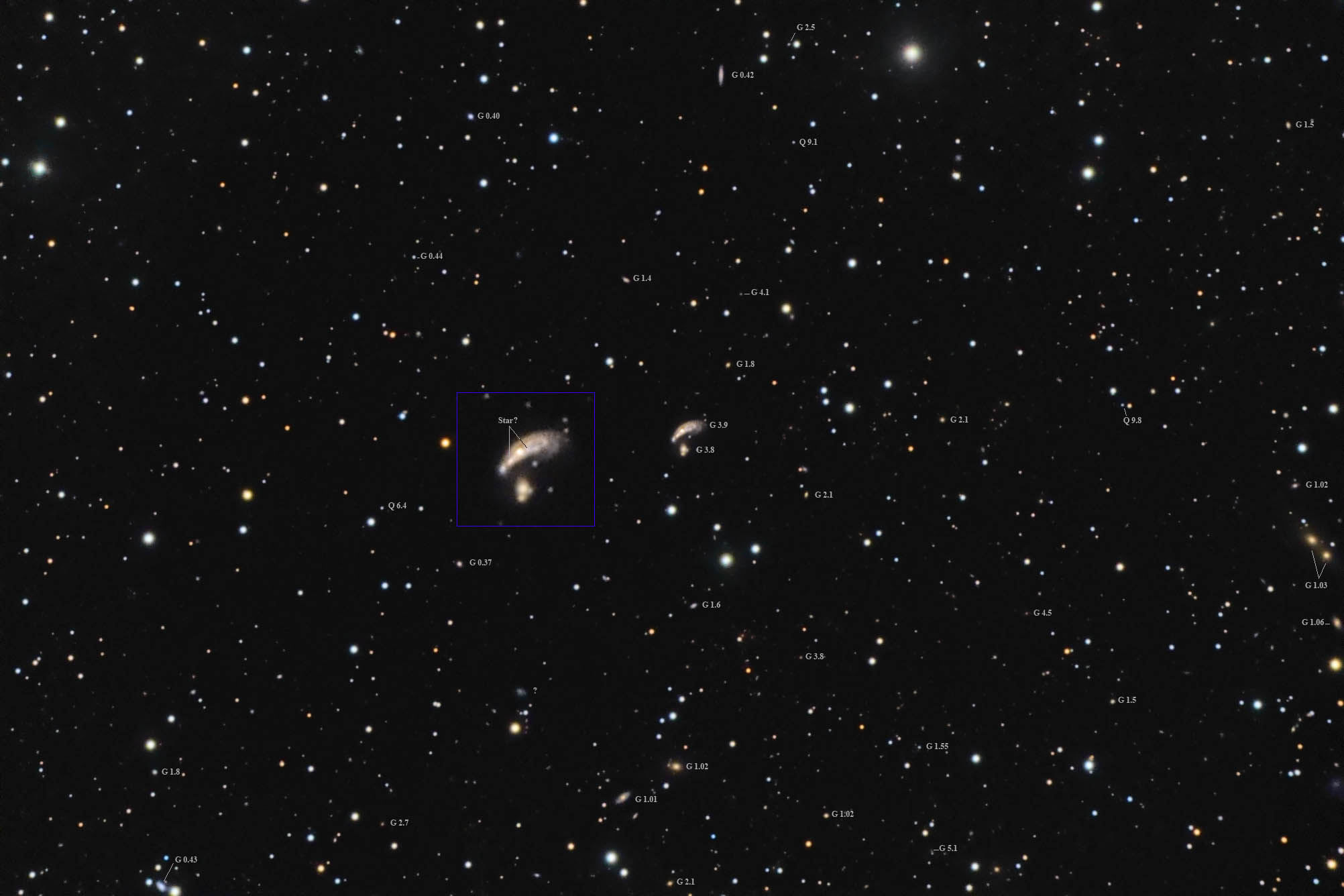