Arp 127 consists of two interacting galaxies, NGC 191 and IC 1563. Oddly it falls under Arp\'s category of Elliptical and Elliptical-like Galaxies: Close to and perturbing spirals. NGC 191, the big one, is classed as SAB(rs)c? pec while IC 1563 is S0 pec sp. In my image, it looks more like an edge on Sa galaxy with a well-formed disk and spherical core though there is only a hint of a dust lane. It is surrounded by a bright halo of likely tidally displaced stars. My processing has cut through these to the galaxy \"hidden\" inside this halo as has the Sloan image I\'ve linked to below. In any case, I find it hard to consider either elliptical-like. Both seem perturbed to me. The pair is about 260 million light-years away in the constellation of Pisces just west of the rich Abell 85 galaxy cluster.

There\'s a star-like object within the disk of NGC 191. Some catalogs call it a galaxy, some a star. NED says \"Stellar on DSS, 2MASS, and SDSS images; redshift incorrect?\". It then gives it a size of .19 by .16 minutes of arc (11.4\" by 9.6\") and the questionable redshift is about 600 million light years. I vote for it being a star. My astrometry shows it to have the same PSF and FWHM as similarly bright stars in the area once the galaxy disk is subtracted.

Arp\'s note: \"Sharp absorption lines over N side of perturbing galaxy\". I can\'t quite tell what he is referring to. I do see some faint dark dust lanes in the disk of NGC 191 that are north of the smaller galaxy. The main one being the one the star/galaxy is located in. Other than those I don\'t know what he is referring to. The dust lanes seem rather normal and not worthy of a comment.

The field is rather rich with galaxies at 1.9 to 2 billion light years. I see no cluster however in the catalogs. Since I\'m likely only seeing the really big members it likely is far more densely populated. There are hundreds of faint galaxies in the image without redshift data, many likely are part of this group. Abell 85 is a large spread out group the main members show a redshift under 1 billion light years but there is a sprinkling of far more distant galaxies carrying the Abell 85 designation. I doubt they are true members of the group.

The only other NGC galaxy in the image is NGC 195 near the bottom edge toward the left. At 210 million light years it is likely not related to Arp 11. It is interesting with a tight inner ring-like structure made up of arms coming off a bar with two large outer rings also forming a ring-like structure. It is classed as (R)SB(r)a: at NED and the NGC Project.

Arp 191 was discovered by William Herschel on November 28, 1785. It\'s not in either of the Herschel 400 observing programs. The companion IC 1563 was discovered much later by Guillaume Bigourdan on December 16, 1997. NGC 195 was discovered in 1876 (exact date unknown) by Wilhelm Tempel. 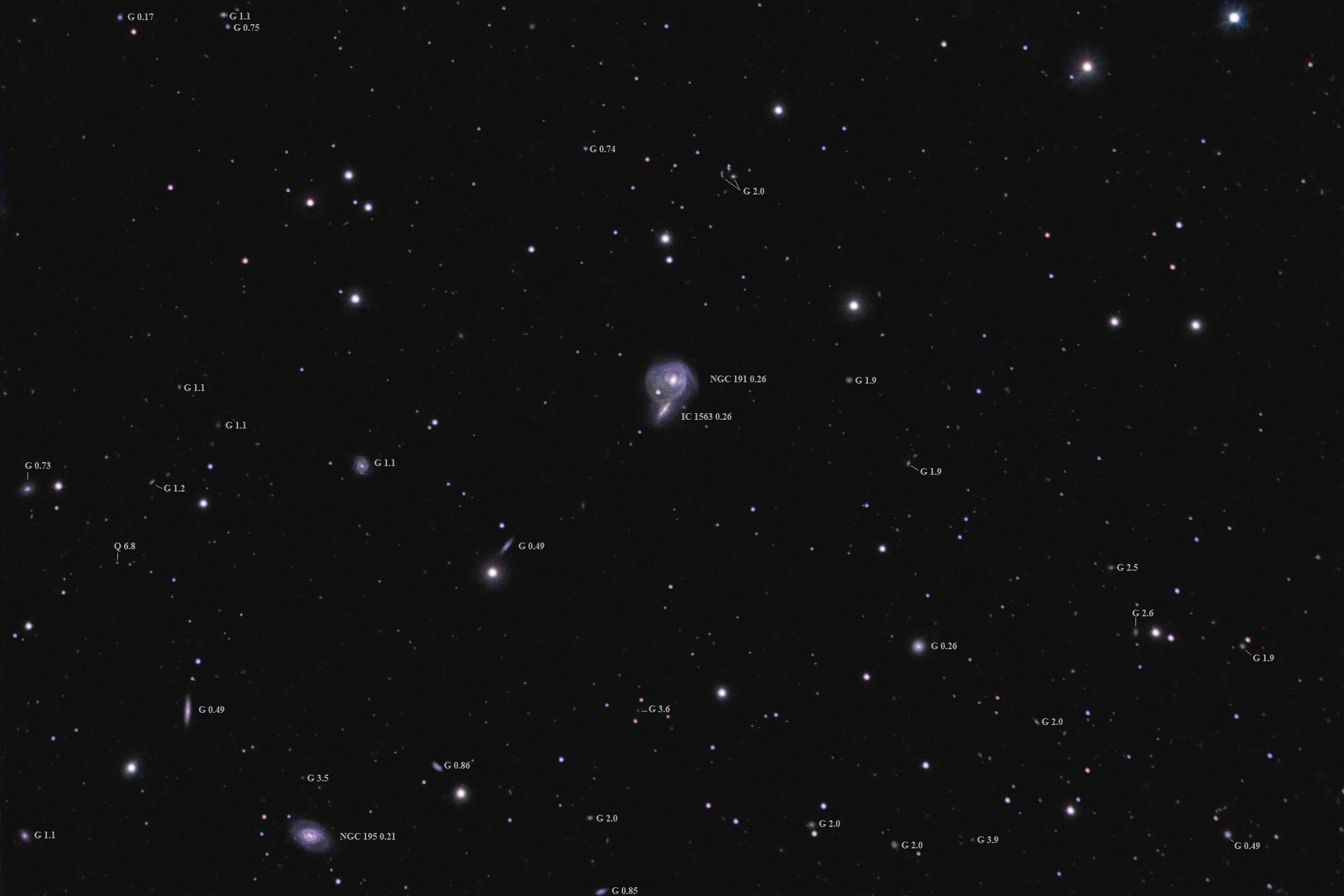 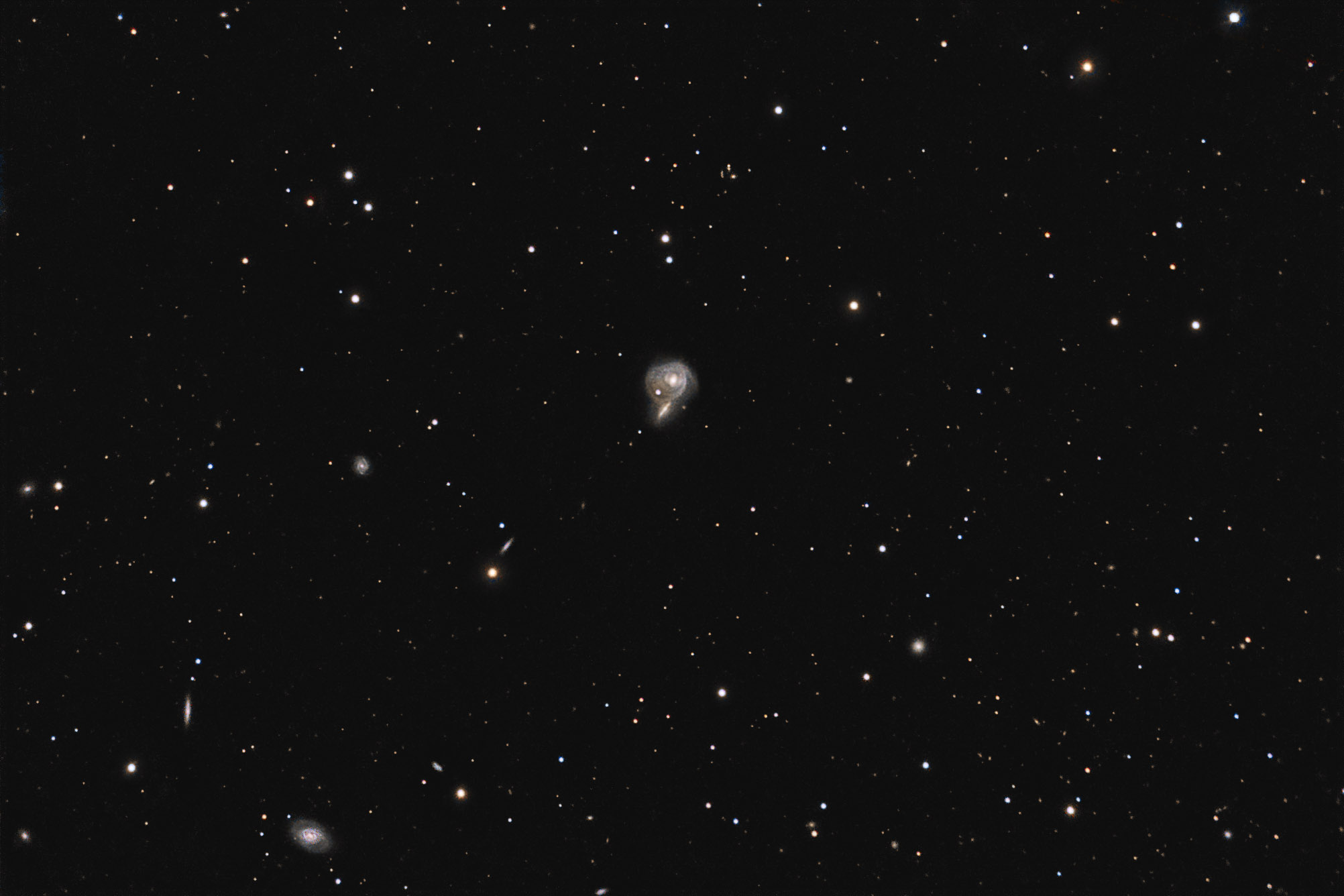 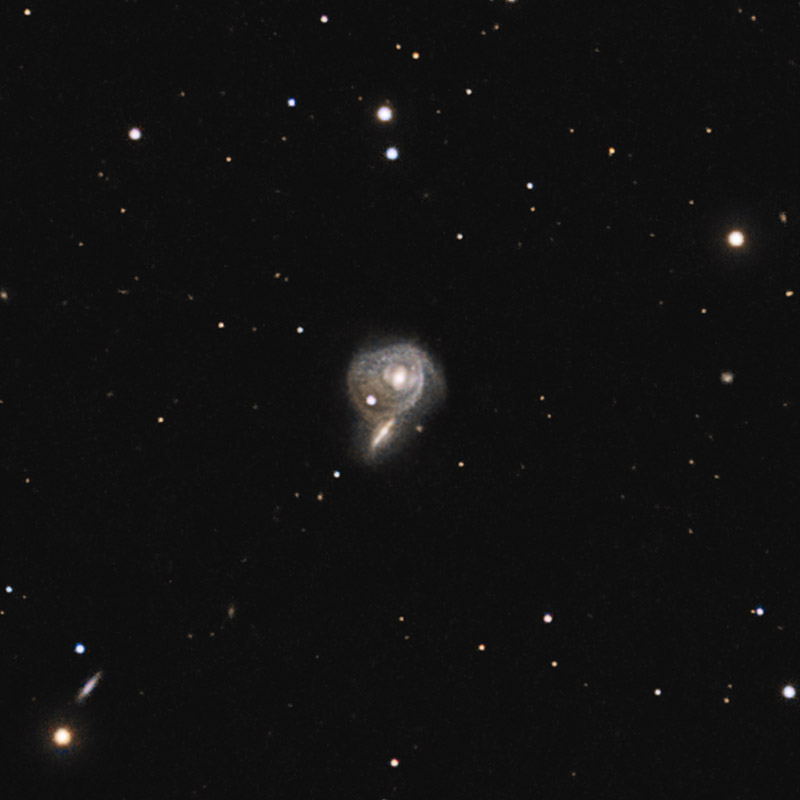