Arp 136 is an SO galaxy seen nearly edge on that has a blue tidal plume on its eastern end. It appears surrounded in a faint halo of blue stars as well. Is this a plume or the remains of some dwarf galaxy it has eaten? Plume seems the favored explanation though there\'s little on this. Arp classed it under Elliptical and elliptical-like galaxies with nearby fragments. I assume the plume is the fragment. I don\'t see anything else that qualifies. Arp\'s comment; \"Faint streamer off one end of E galaxy.\" I assume the E means the east end of the galaxy as Arp 136 is a single galaxy. It is considered paired with another to the NE but it isn\'t included in Arp\'s image and would be more northeastern in any case. There could be a faint stream running from Arp 134 to the northeastern companion. Or it might be noise from that horrid double star. Also, the obvious puff of stars off the eastern end may, in fact, be an entirely separate galaxy. In the color pushed SDSS image it has a very strong blue color compared to Arp 136. Though there\'s no separate designation for it that shows up in NED. If so and if the faint possible stream is just noise then there\'s little evidence of interaction between the two. I can\'t find anything on this, however. When I push the color as I have in this image I too get a blue color to this plume so I believe it real and likely a colliding dwarf galaxy that was gas-rich so capable for forming new stars when the gas is compressed by the collision.

Arp 136 is NGC 5820 and is located about 160 million light-years away based on its redshift though a note in NED says it is 69 megaparsecs distant which would be about 225 million light-years based on a different redshift value. Why they are so far apart I don\'t know. The average of two Tully-Fisher measurements agree with the redshift distance. It is located in northern Bootes just about to the Draco border. It was discovered by William Herschel on May 5, 1788.

It is paired with NGC 5821 which has a similar redshift also indicating a distance of about 160 million light-years. It seems a bit distorted but I see no tidal plume. Still, it is a possible cause of Arp 136\'s plume (if one really exists). The little SO like galaxy just south of NGC 5821 is SDSS J145901.42+535411.1 is the third member of the Arp 136 system as it is a dwarf galaxy also at about 160 million light-years. It was also discovered by William Herschel but nearly a year later on April 24, 1789. Neither it nor NGC 5820 are in either of the two Herschel 400 observing programs.

After so many galaxies about 145 to 160 million light-years you might think there\'s a cluster here and in fact, there is. It is ZwCl 1457.5+5415 with some 245 members with the diameter of 3.7 degrees. It is centered on the odd spiral galaxy at the top of my image. But appearances can be deceiving. The spiral with the very weird spiral arms is SDSS J145902.19+540428.7 and is about 1 billion light-years distant by redshift. It appears this cluster is really several unrelated galaxy clusters as many other galaxies in this image are about 1 billion light-years distant.

The galaxy just above the brilliant double star is PGC 053553. I find no redshift data on it. The double star made this a processing nightmare is two main sequence F1 stars of 6.9 and 7.6 magnitude. They carry the designation WDS SHJ 191. Hipparcos says the upper fainter one is 347 light-years distant while the brighter is 383 light-years away. Thus they appear unrelated. I need to invest in newer filters with better anti-reflection coatings than these. Bright stars really are a problem. 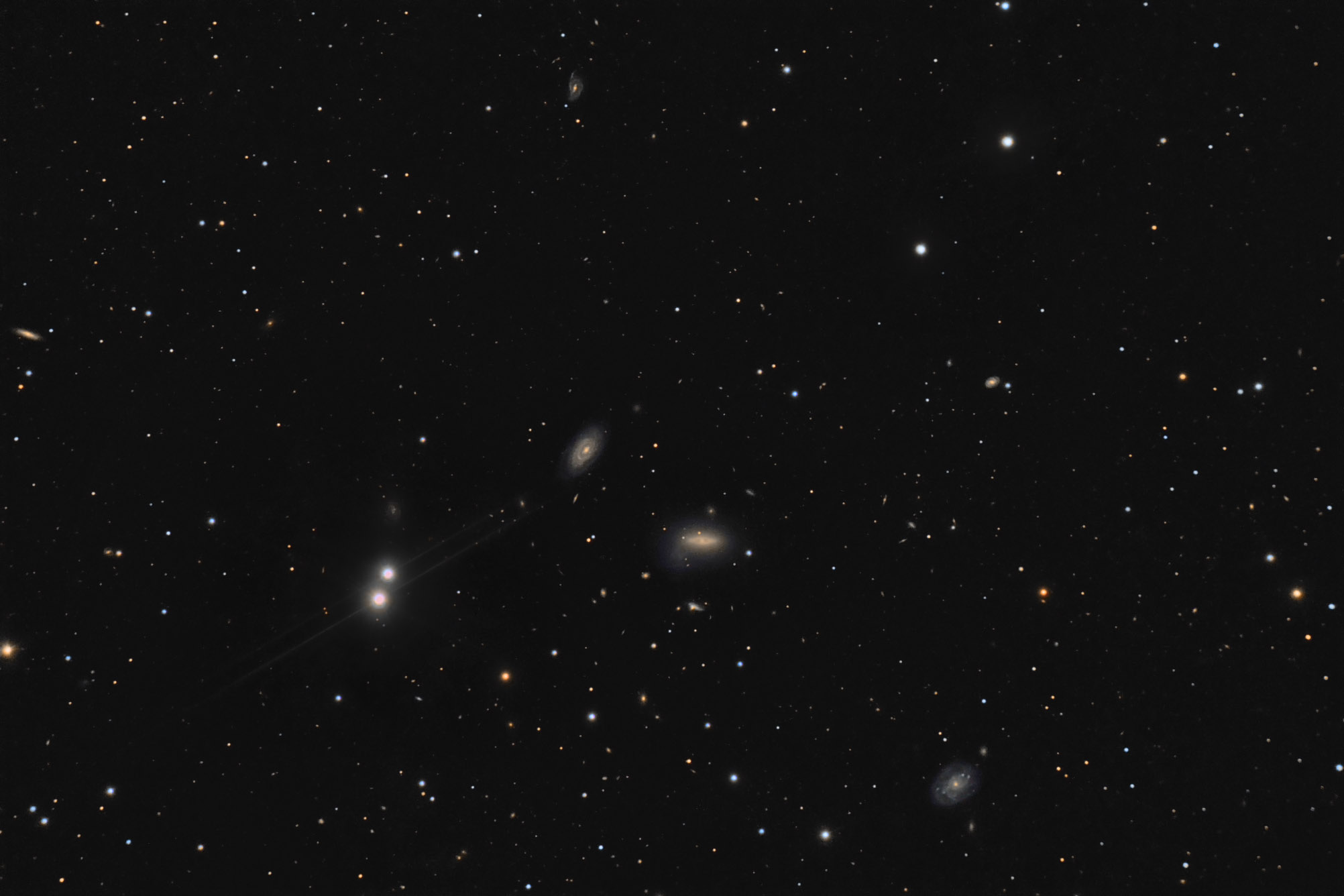