Arp 137/NGC 2914 is the other peculiar galaxy in the image just to the southeast (lower left) of Arp 232. It falls under Arp\'s category of Elliptical and Elliptical-like Galaxies: Material emanating from elliptical galaxies. It does have a plume of material coming off the south end and a small faint one off the northern end. Arp\'s image makes it look like there\'s an odd hook like arm coming off the northern side as well. I don\'t know which he is referring to. In my image that northern \"hook\" is seen as a continuous ring-like structure, or is it a one-armed spiral? Also of interest is the very high proper motion of a star near the \"bright\" star to the east of Arp 137. In Arp\'s image, it is northwest of the \"bright\" star while some 45 years or so later it has moved to the south-southwest of it. I\'ve marked it as HPM in the annotated image. William Herschel found this galaxy on March 3, 1786.

Arp 232/NGC 2911 turned out more interesting than I thought it would be when I was looking at the raw data and Arp\'s image. Arp put it in his category: Galaxies (not classifiable as S or E); Appearance of fission. I really don\'t see it in either his image or mine but it sure does have some interesting dust lanes. Two linear ones that make an X near the core rather similar to NGC 660 just not as spectacular. Another forms an arc. Could it be the cause of his fission category? Arp did comment on the larger linear dust lane saying \"Absorption lane reaching away from galaxy.\" It barely shows in his image. I don\'t see the other dust lanes in his image. Note that Dennis Webb\'s webpage puts this one in the concentric rings category. He tells me that from Arp\'s notes it was ambiguous which category it belonged in. He thought it looked more like concentric rings was the right category and put it there for the web page. Later researching this one for their book Dennis contacted Arp who told him it belonged in the fission category. That is what the book shows but the webpage hasn\'t been updated as of the time I am typing this.

Arp 232 is NGC 2911 and is part of a group of galaxies that includes 3 other NGC objects though one is subject to debate. One of the others is also an Arp galaxy as well though I didn\'t realize it at the time. Nor did I realize it a month later when I took it though that data is not as good so I\'m going with this image. It was discovered by William Herschel on March 11, 1784. Like the other one in this image, he found it isn\'t in either of the Herschel 400 observing programs.

Arp 232 is classed as SA(s)0:pec;Sy LINER by NED and the NGC Project. NED puts it about 155 million light years distant by its red shift. All that dust is very unusual for an S0 galaxy as is the very distorted shape of its outer envelope. While I found nothing on it, it does appear to me it interacted with or ate a companion. Something had to trigger the Seyfert and LINER activity of its nucleus. I didn\'t see anything indicating it was interacting with Arp 137 but certainly that galaxy has had a run in with some other galaxy to create its southern plume and odd arm structure. Arp 137 is classed as SB(s)ab by NED and and the NGC project. So none of them see the arm as a ring like I was thinking. It\'s nearly identical red shift puts it at 160 million light years making the separation between the two at about 225 thousand light years if they were at the same distance from us. Close enough I\'d suspect some interaction.

To add to the oddities in this image there\'s a star-like object just off the NE arm of Arp 137. NED identifies it as SDSS J093403.79+100646.8 saying it is part of Arp 137. It isn\'t a star, that is certain. Its point spread function (how its light is distributed) shows it to have an angular size and not just a point source like a star. But is it truly part of Arp 137? I don\'t think so. The galaxy shows no hint of star clusters at my resolution. For there to be a single one making this bright blob and for it to be just off the side of the \"ring\" doesn\'t seem reasonable. Adding to the confusion NED, while saying it is part of Arp 137 with a redshift of 160 million light years gives this object a redshift that puts it 1.8 billion light years distant. Far beyond Arp 137. NED doesn\'t say why it ignores this and thinks it\'s part of Arp 137. Though I\'ve seen a couple cases where the SDSS redshift was apparently very wrong I doubt this is one of them. I don\'t have a final answer, however.

The tiny blue galaxy NE of Arp 232 is another problem. Some sources say it is NGC 2912. Other sources say NGC 2912 is a duplicate entry for NGC 2914 (Arp 137) The NGC project, however, says NGC 2912 is just a star. I like Dr. Corwin\'s logic and will go with him and NED saying NGC 2912 is a star. Seligman agrees with Dr. Corwin on this. The star was first recorded by Herman Schultz on April 3, 1870. The PGC records it as PGC 3325919. That leaves this blue galaxy. NED and Seligman say it is PGC 027167. They put it at a redshift distance of 172 million light-years making it a dwarf member of the group. They class it as Im, an irregular dwarf of the Magellanic type. To me, it looks like a very small spiral but that likely is due to my limited resolution.

There are many more minor members of the group as well as one large member, NGC 2919 in the upper left of my image. It shows a lot of interesting detail. NED classes it as SAB(r)b: with a redshift that puts it only 127 million light-years away. Is it truly a member of the group with a somewhat unusual red sift due to its motions in the cluster or just a foreground object. I flipped a mental coin and it came up with it being a member of the group. It was discovered by William Tempel on February 1, 1877. The annotated image lists galaxies that have a redshift indicating they are members of the group listed by catalog name and distance. Galaxies and quasars not members of the group with redshift data are listed by their redshift distance. All distances are in billions of light years and determined using NED\'s 5 year WMAP option. 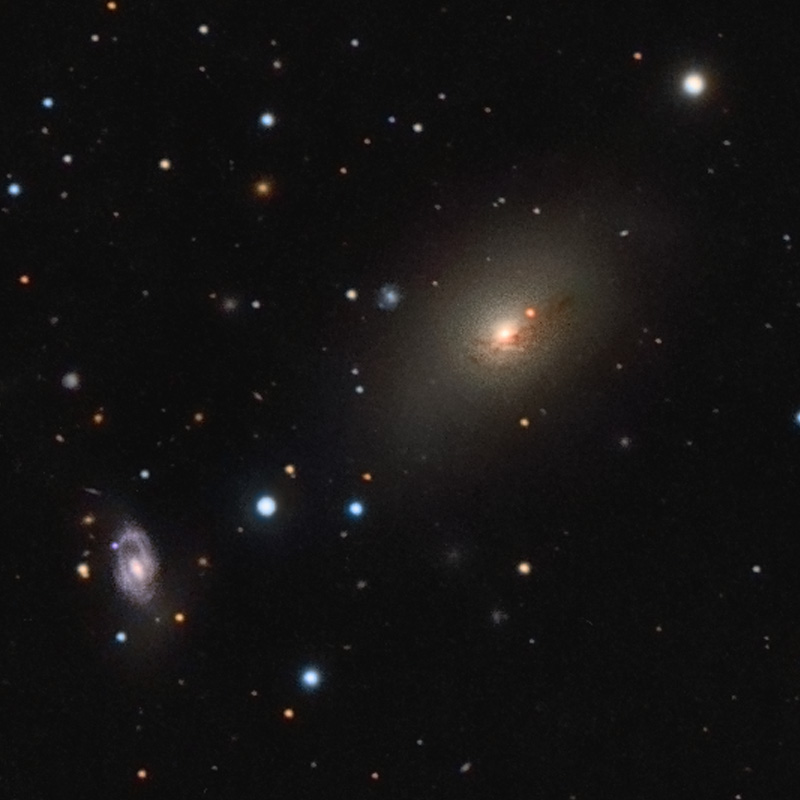 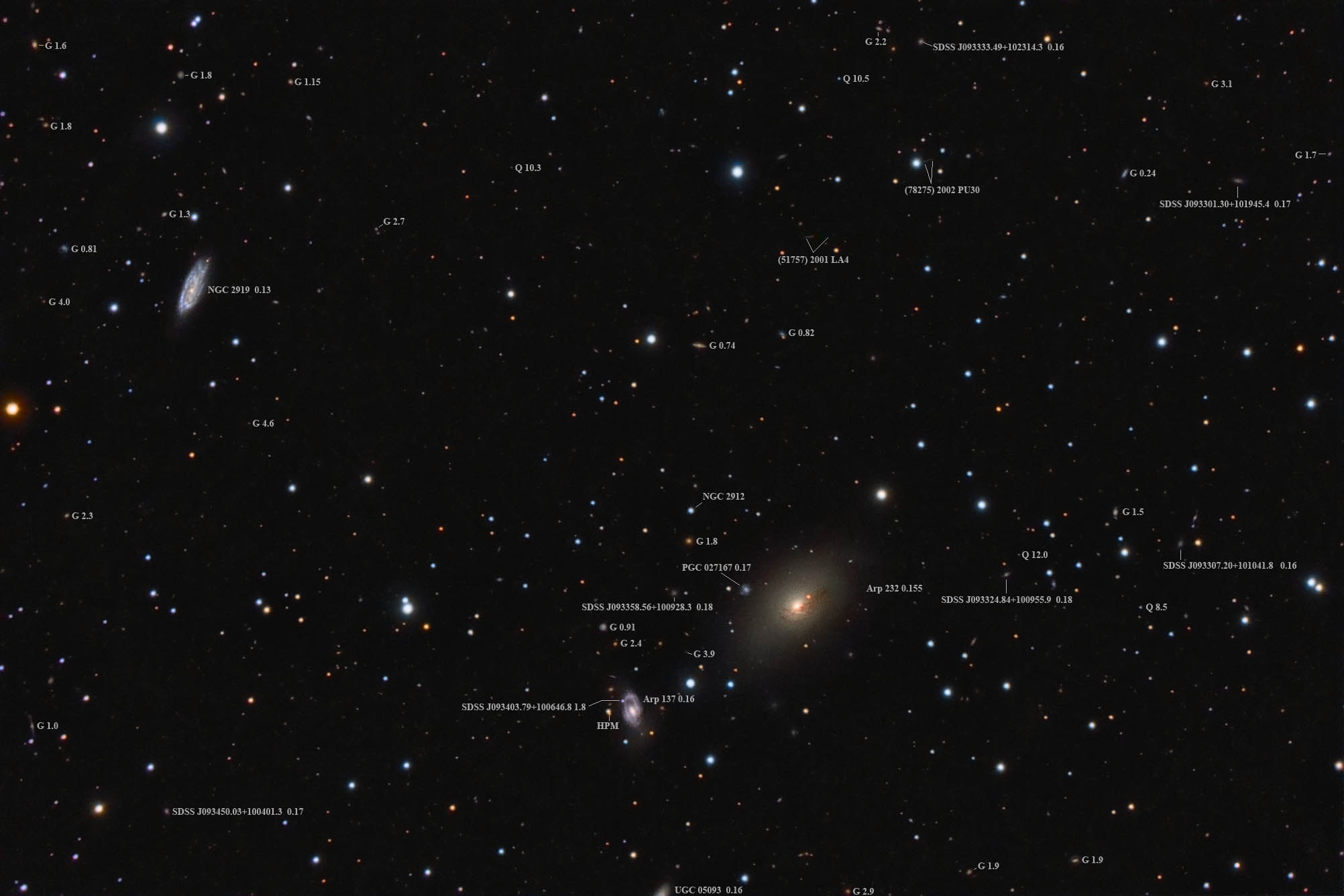 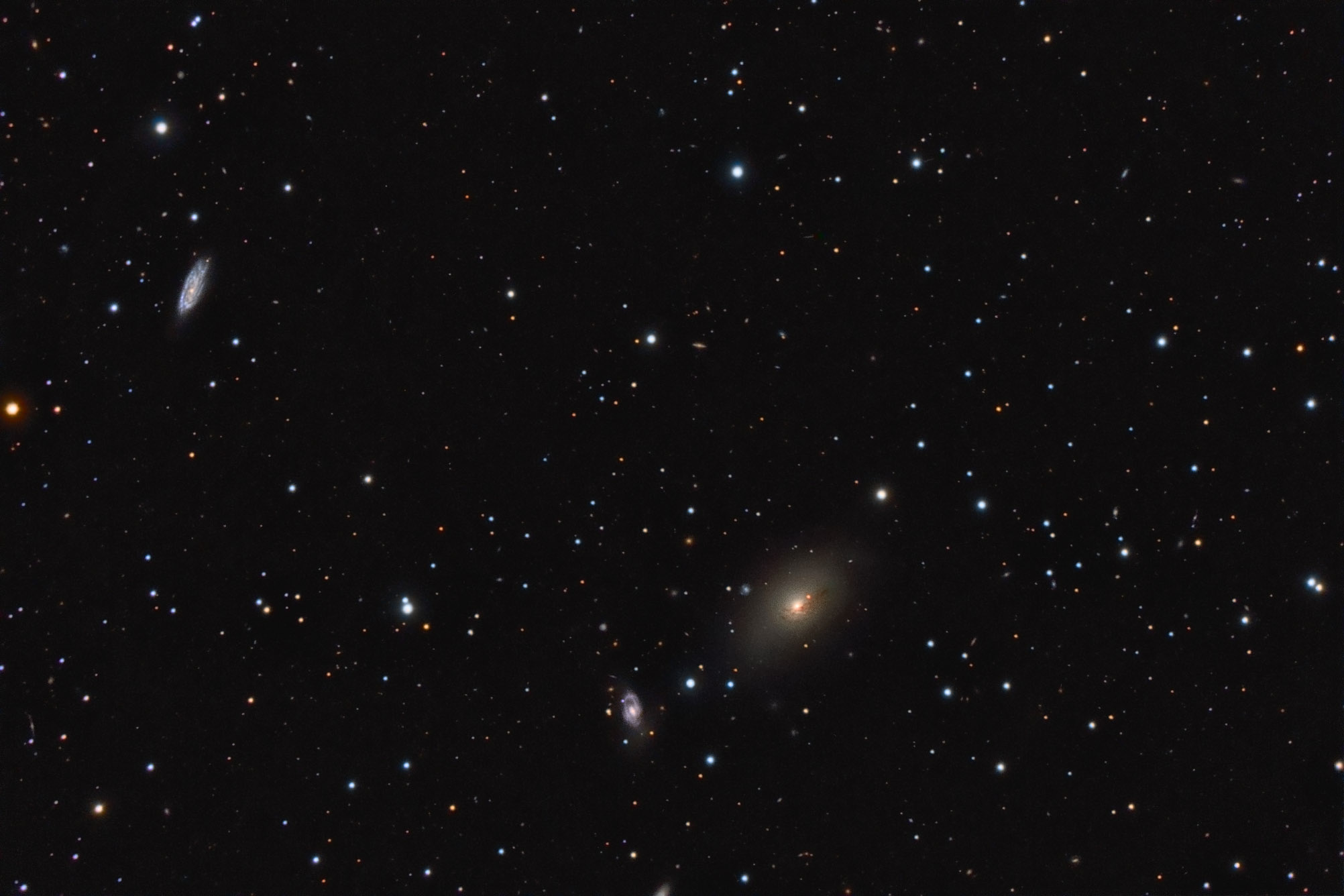