The Space Telescope Science Institute that runs Hubble among other things, released a Hubble image of this interacting galaxy system. That gave me the push to reprocess my image. The flats were unusable so I replaced the background with a mostly false one. Until I retake it this will have to do. It is a \"tad\" poorer than theirs but since my system is billions of dollars cheaper I\'ll live with the difference. Arp 142 consists of the two galaxies NGC 2936 and NGC 2937 which are classed as ring galaxies. They are located in Hydra near the Sextans and Leo borders and are about 330 million light-years distant. NGC 2936, the porpoise shaped galaxy, is a bit over 160,000 light-years across and is full of new, blue star clouds due to its interaction with NGC 2937. Oddly NED lists several of these as separate galaxies rather than parts of the galaxy that they really are. This is obvious from the Hubble image but might not have been prior to that. I\'ve listed those visible in my image on the annotated image as G? (Starcloud). NED classifies NGC 2936 as I? and 2937 as E while the NGC project says E+ for both. Why NGC 2936 is highly distorted by the encounter but NGC 2937 appears unchanged I don\'t know. Maybe its density is so high it could hold its stars while distorting the much less dense NGC 2936. That\'s only a guess on my part as I found nothing to explain it. The pair was discovered by Albert Marth on March 3, 1864.

The system has a third member, UGC 0513 Notes01. For some reason, the UGC catalog gives the two galaxies of Arp 142 different numbers (UGC 05130 and 05131) but gives the number UGC 05130 to a pair of galaxies, just not these two. The second galaxy with the 05130 number is the spiral hiding behind the star to the northwest. When this happens and the catalog doesn\'t make a distinction NED uses Notes(nn) to distinguish between them. Oddly NED has no Sloan Survey designation for this galaxy nor a classification or redshift data. The HST site indicates its distance is 230 million light-years making it 100 million light-years closer so just a line of sight coincidence.

Now that my mind is tied in a Gordian knot I\'ll end this by mentioning there\'s one asteroid in the image. When I looked it up back in 2009 the minor planet center estimated it to be at magnitude 18.1. When I looked it up for this update, not realizing I already had done so I found its estimated magnitude to be 17.8 at the same time and date. Now it\'s time for a drink. 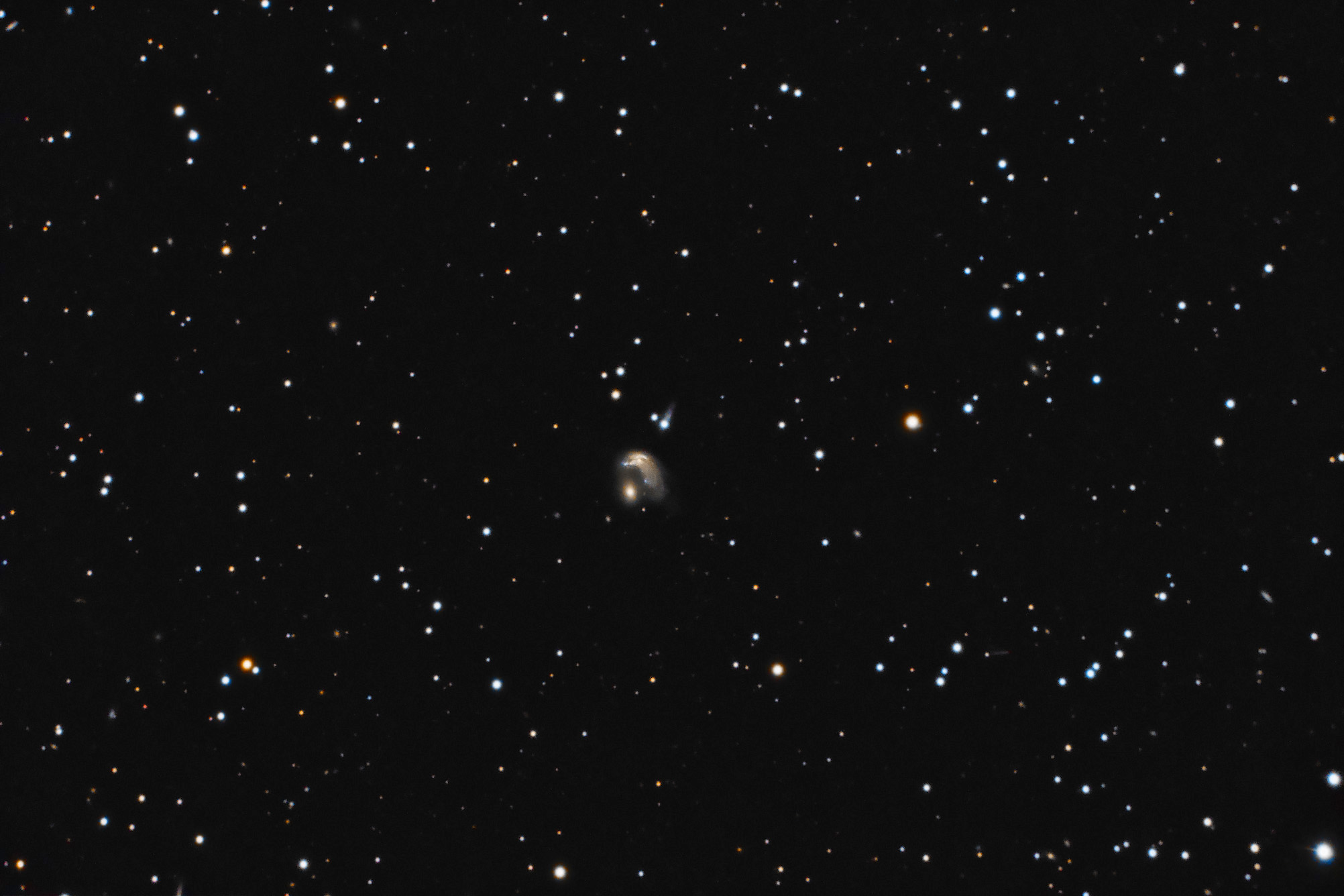 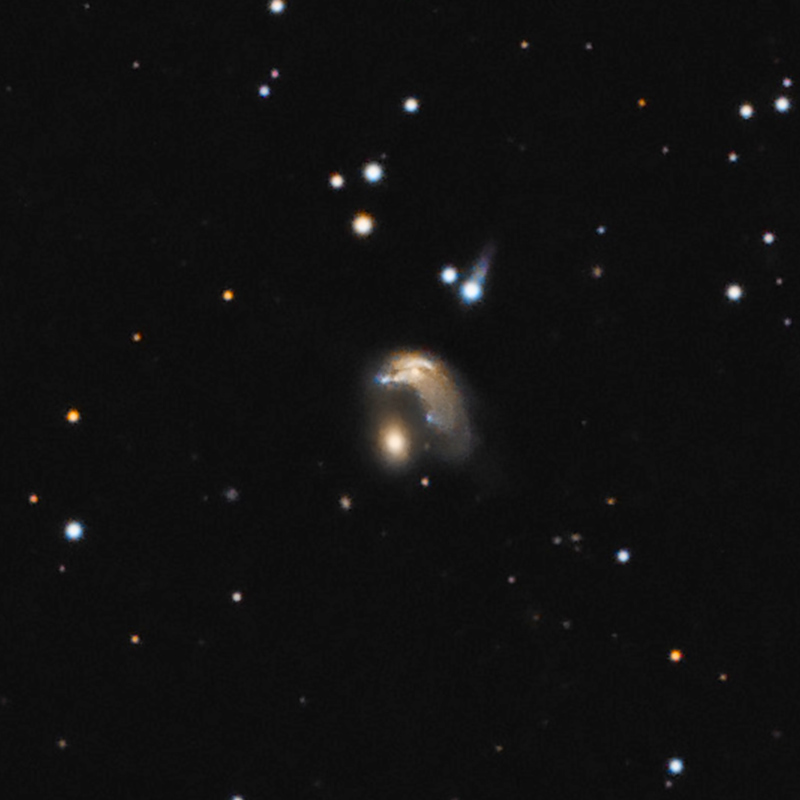 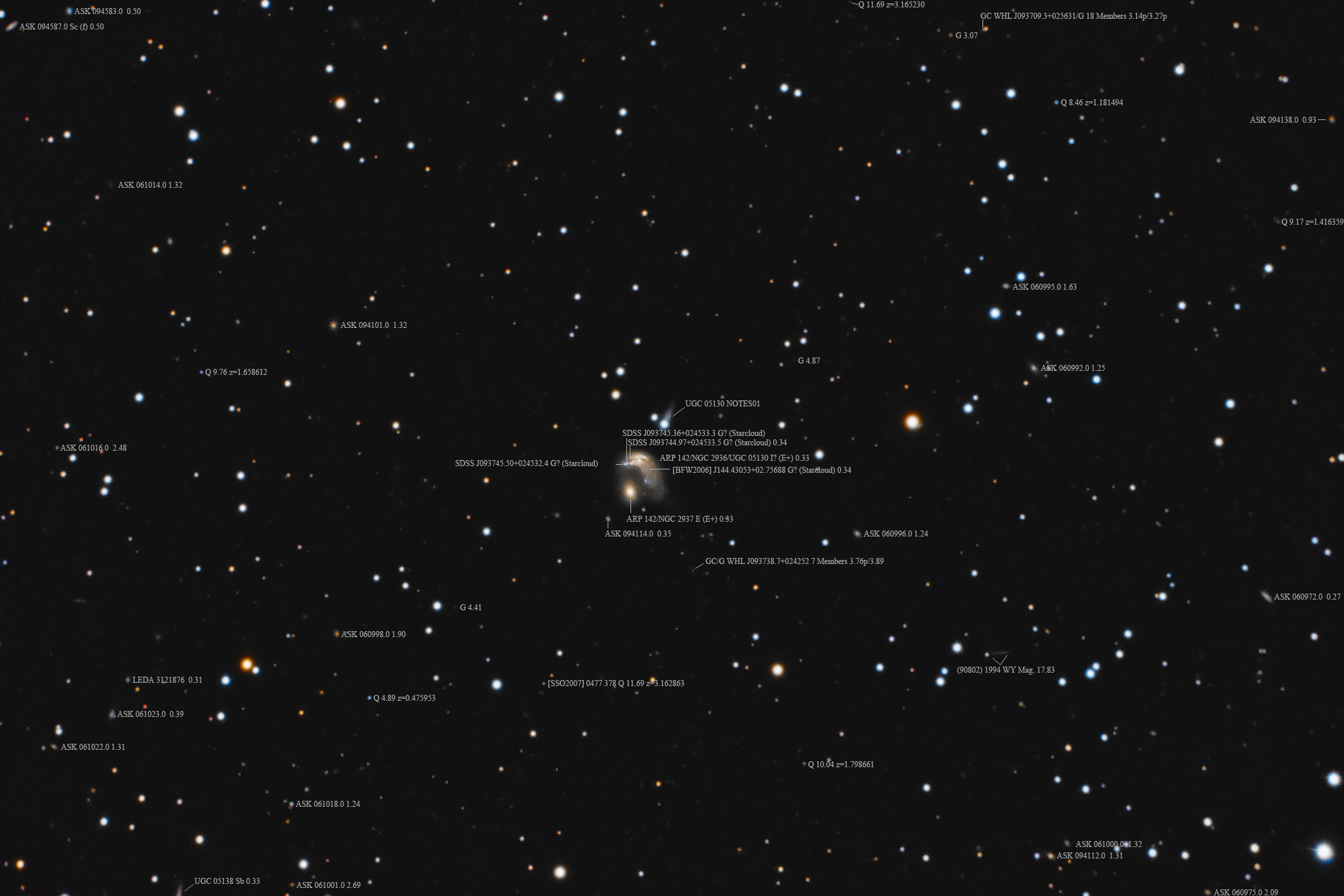