Arp 143 is a pair of colliding galaxies in Lynx about 190 million light-years distant. The pair was discovered by Édouard Stephan on January 18, 1877. The red galaxy, NGC 2444, is classified as S0 pec while the blue one, NGC 2445 is an irregular of the Magellan type. It may have had some other structure prior to being torn apart by the much denser NGC 2444 which appears to be a \"red and dead\" galaxy though starburst activity is seen in its core thanks to the collision. NGC 2445 is packed with very blue star clusters in HII regions. Unfortunately, its redshift is too great for me to get any H alpha data on it as it has been moved out of my passband.

Arp, however, saw this pair rather differently classifying it under his category for \"Material emanating from elliptical galaxies\" even though neither is seen today as being an elliptical galaxy and certainly the term \"material emanating\" doesn\'t really apply. Material drug from galaxies by gravity would be more correct. Arp, however, was using visual description rather than trying to explain what was seen, I think. Arp\'s comment on this one puzzles me. It reads \"Diffuse counter filament.\" I have no idea what this is referring to other than possibly the lopsided plumes from NGC 2444. The pair was discovered by Édouard Stephan on January 18, 1877.

Two other galaxies are in the image that likely are members of the same group as this pair. CGCG 206-022 is a low surface brightness classic two arm Sbc spiral to the west and ASK 045842.0 is listed as an irregular galaxy to the east. Though to my eye, it looks like a highly tilted barred spiral.

The annotated image shows several distant quasars (Q) and candidate quasars (CQ). All the candidates have spectroscopic redshift determinations so likely are either true quasars or something very akin to them to be seen as starlike objects at such great distance.

I\'ve also annotated some of the HII regions in NGC 2445. One appears to be in two parts as the coordinates point to the space between them. Also what appears to me to be another HII region is listed as a galaxy, ASK 045722.0 by NED but with virtually the same redshift and its blue fuzzy nature looks to me to be another HII region. If not it may be the core of yet a third galaxy ripped totally apart by this collision. I rather doubt this but suppose it possible. I found nothing more on it. It looks more like an HII region in the Sloan image than in mine, I don\'t know why the difference other than my lower resolution may be the cause.

I found an asteroid in the image I\'d overlooked the first time. It is quite bright over on the western edge of the image. How I missed it I don\'t know though the trail is short and moving nearly due north. This would mean I caught it right at the end or start of its retrograde motion when, except for the difference in its and our orbital plane, it would appear motionless in the sky. This lasts only a few days, a rare catch.

Arp\'s image is at: http://ned.ipac.caltech.edu/level5/Arp/Figures/arp143.gif It is oriented south at the top while my image has north at the top. It was taken with a red sensitive emulsion (103a-D) dimming the blue regions significantly. 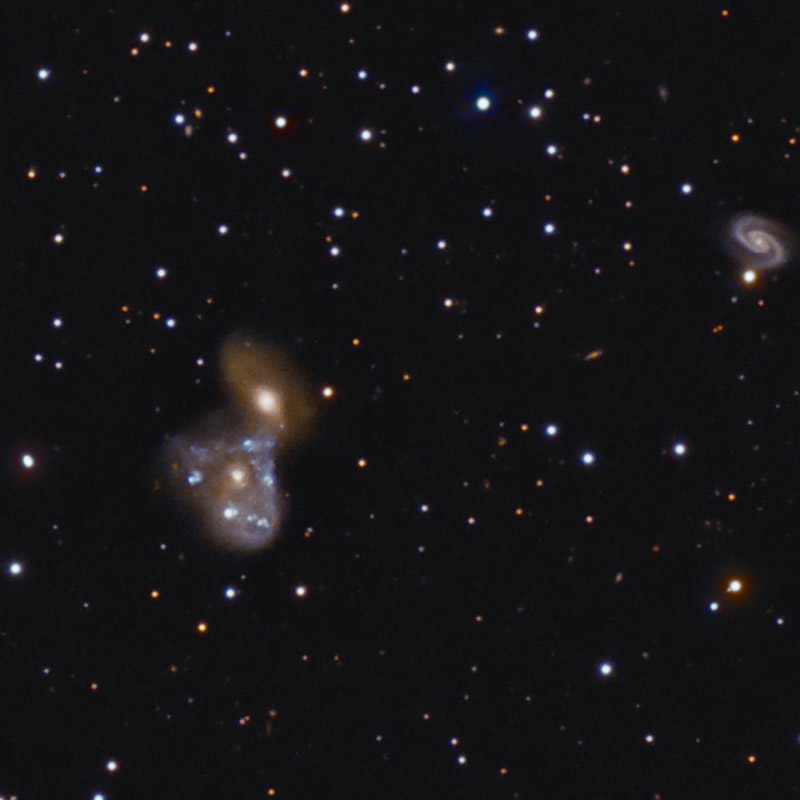 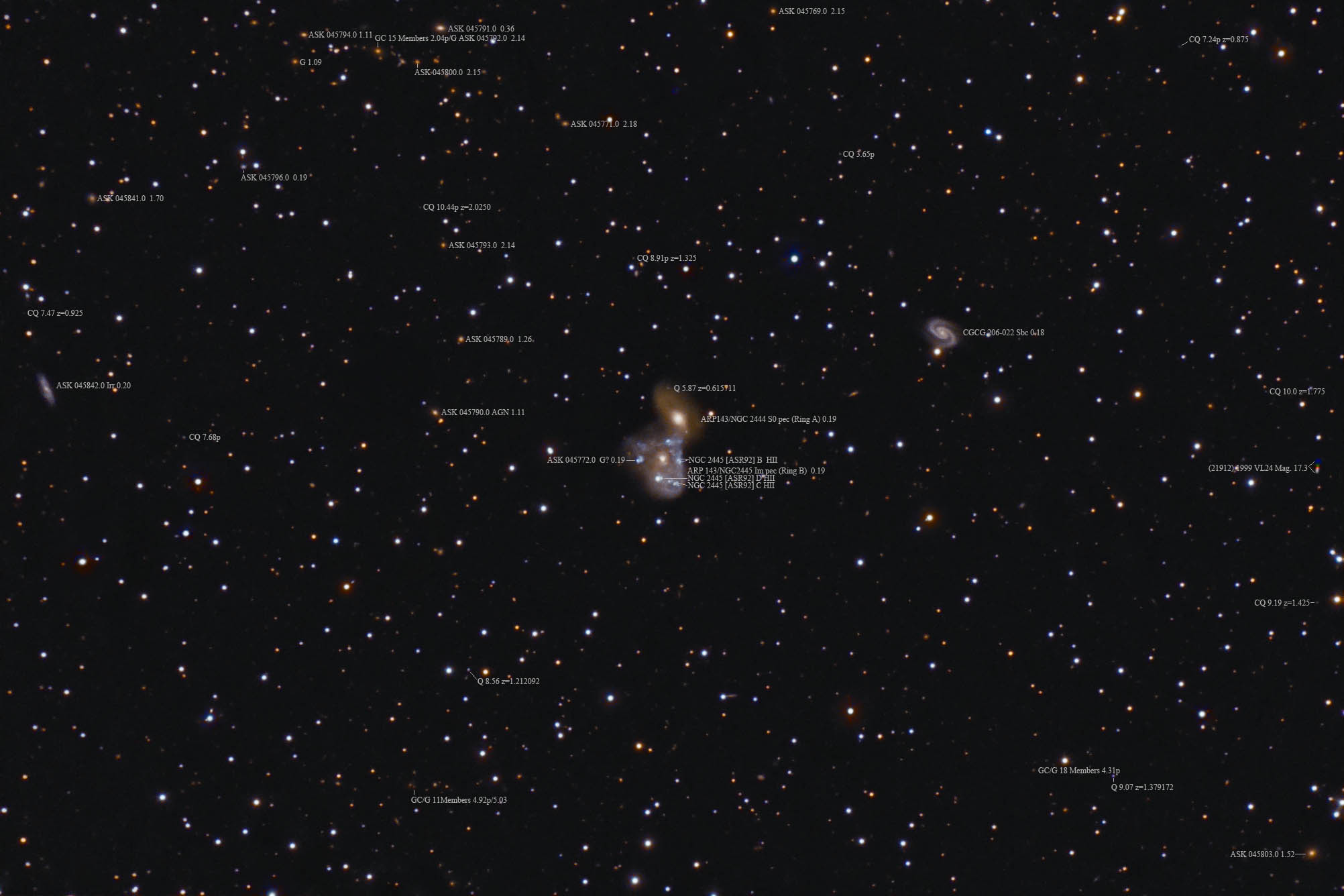 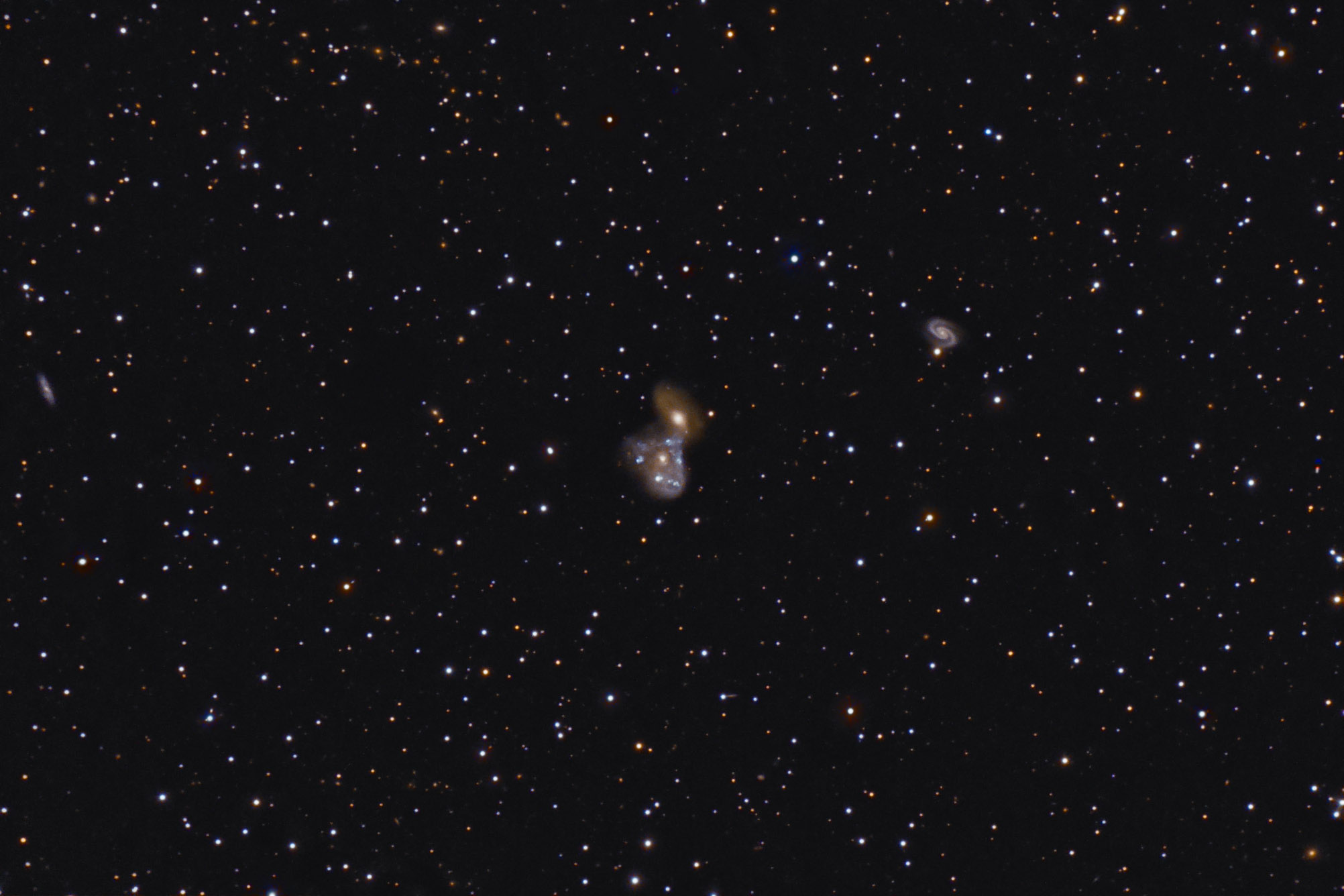