Astro image tip. Avoid objects in the geostationary satellite belt! No one told me this so I had a night of better than average seeing so decided to try for Arp 146 which is too far south for me to image on an average night being about 6.5 degrees south and of small angular size. That put it at the northern edge of the geostationary satellite belt as seen from my latitude. Such communications satellites aren\'t really stationary in the sky. They make a small, about 1 degree high figure 8 pattern around their geostationary assigned position. From my location, Arp 146 is right at the northern edge of that pattern. So I ended up imaging lots of communications satellites, one obviously long dead. I removed them from the color frames as well as all but one luminosity frame. One frame only had 3 and I decided to leave them in to give a flavor of what I had to deal with. There were 29 satellite trails in total with 5 in one blue frame. Notice the angled trails. They are decommissioned geostationary satellites. When they are about to run out of station-keeping fuel -- the orbit is unstable and the figure 8 pattern grows with time so fuel is needed to keep the bird within its prescribed spot so fixed dishes still see it -- it is moved several hundred miles higher to get it out of the way. The last of the fuel is used for this. With time the orbit is altered by the nonround earth and pull of the moon and sun until it is somewhat inclined to the equator. That is why I can tell it is a deactivated satellite. Also one is using spin stabilization. That\'s no longer used as far as I can determine. This causes it to blink as its reflectivity changes with its spin. It doesn\'t move across the entire image as I terminated the exposure before it had moved all the way across the image. You will see places where the trails fade. This is due to small clouds passing by. They didn\'t totally block the light but did dim it some for a few seconds. The entire image was dimmed but that isn\'t seen except by moving objects.

Notice the bright trail just below Arp 146. It is an active geostationary satellite though its trail wavers like the satellite are drunk. The others do as well. This is due to our atmosphere. This is the seeing I am constantly complaining about. It rapidly moves the star around in the sky. It does the same for satellite trails. This one had just the right exposure to show this motion very clearly. The worse the seeing the more \"drunk\" the trail. The effect of this is to blur the image and is why major observatories are located on mountain tops where they look through far less air than I have to look through. Also, they pick mountains that have what is called laminar air flow. This is a very smooth flow of air that further reduces seeing problems. No mountains and rarely any laminar air flow at my location so stars are fuzzy. I can\'t do much about it. The third satellite is also a decommissioned one as told by its angled trail.

Now for Arp 146. It is classed by Arp under \"Galaxies (not classifiable as S(pherical) or E(liptical)): With associated rings. There are three in this class. The other two are Arp 147 and 148. 147 was the 10 galaxy Hubble made famous and 148 is Mayall\'s Object, the bullet through a galaxy that is also a famous Hubble image. Hubble hasn\'t as yet released a pretty image of this one. Nor could I find a frame of it at the HST Legacy site as of January 2017. So I finally beat Hubble to one.

Arp 146 is composed of two galaxies PGC 509 S pec (Ring B) and PGC 510 S0 pec (Ring A). PGC 509 is the ring while 510 the bullet that made the ring. Why the bullet is usually referred to as Ring A I\'ve not figured out. It is rarely a ring though this one seems to have just one arm that looks much like a ring. The galaxies are just under a billion light years away thus rather small in angular size. While 510 is classed as S0 it does seem to have a single spiral arm. S0 galaxies aren\'t supposed to have defined arms but be just a spindle of stars. That isn\'t the case here.

I could find no redshift data for any other galaxy in the image. Not even a MASX IR galaxy is in the image. Only those whose positions were automatically measured by APMUKS. It gathers little data other than position and crude photometric data. So this is a part of the sky not well studied.

Arp 146 is located in Cetus the whale right up against the border with Pisces and Aquarius. Right in the geostationary belt for my latitude. Grrr. 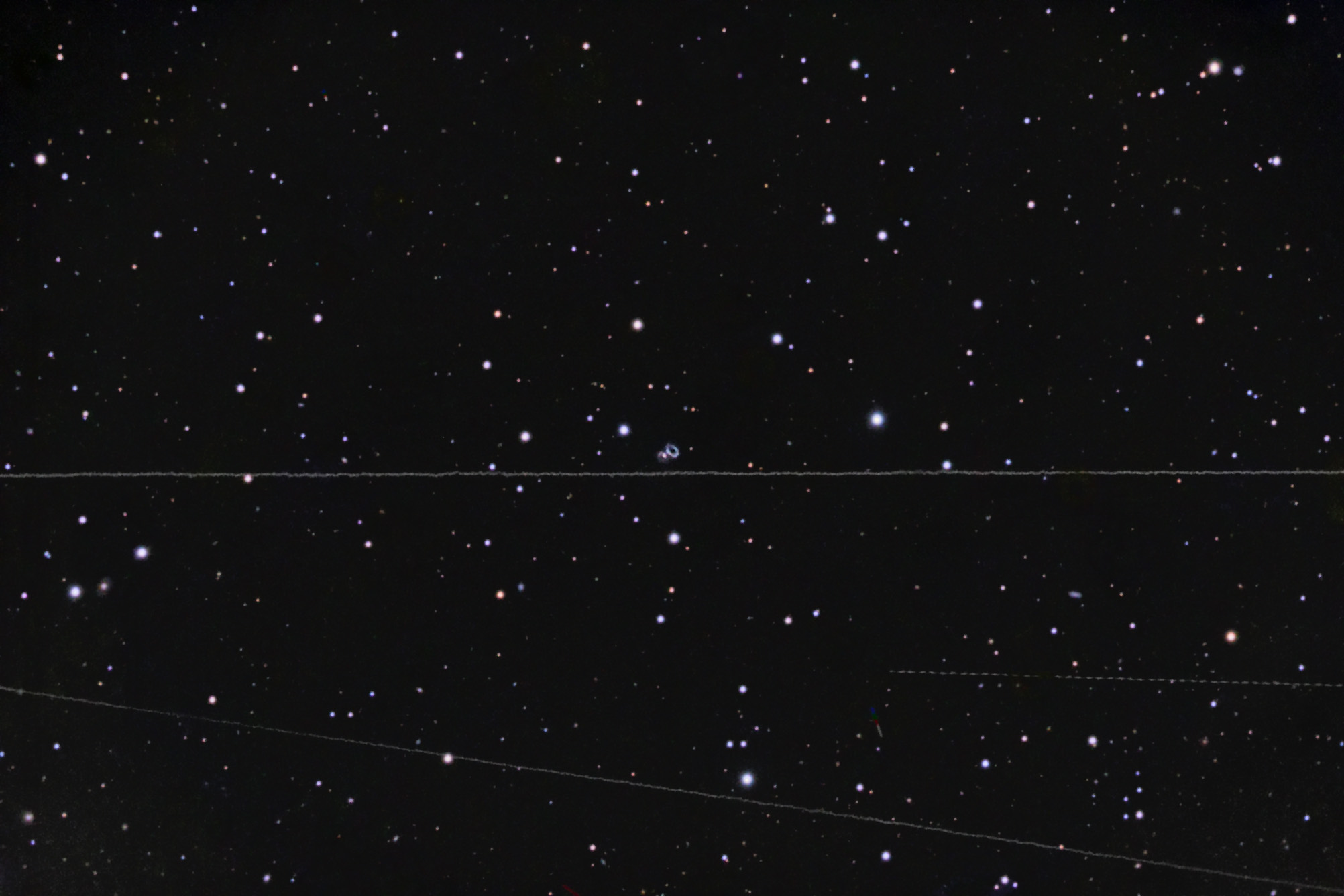 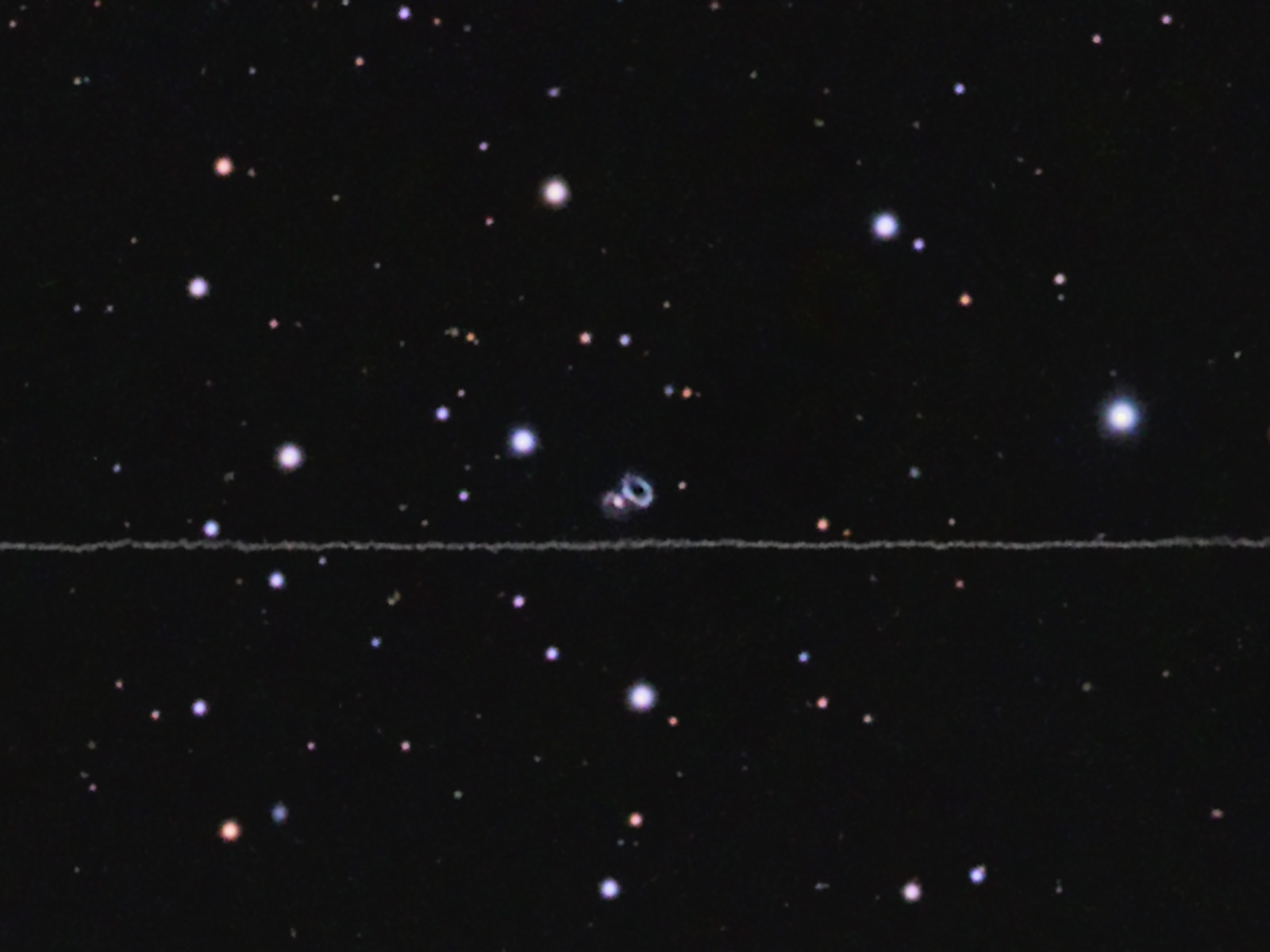