Arp 161/UGC 6665 is thought to be a merger of two spiral galaxies located in western Virgo almost on the Leo border. It is about 270 million light-years distant. Arp put it in his class of galaxies with diffuse elements. An obvious reference to its cone-shaped jet/plume. Arp\'s comment \"Faint, diffuse material extends away from neck.\" Several sources seem to see the bright region at the \"neck\" as Arp calls it, as a jet with the plume extending from it. While the night I took this was awful with resolution of only about 3.5\" of arc or worse, the \"jet\" is really two point sources, better seen in the Sloan image. Also better seen in the Sloan image is the spiral structure of the galaxy. It was blurred out of existence by the horrid seeing I experienced the night I took my image. The plume appears the result of the merger and there is no \"jet\". The lower of the two star-like objects is shown at NED to be a 20th magnitude star on the Sloan survey. The upper, brighter object isn\'t listed at NED. Likely, it too is just a star in our galaxy confounding the issue. Arp had even worse seeing than I did so his image is of even less help here. Odd to out resolve the 200\" scope when I\'m having a bad night. Arp must have been desperate that night. I know the feeling.

NED classes the galaxy as Sb pec;HII;WR Sbrst. The starburst is likely due to the merger. I don\'t know what NED means by \"WR\". Usually, that refers to a Wolf-Rayet star. Anyone know what it means in the case of galaxy classification? NED\'s own reference page fails to define the term. All I can think of is the spectra has features of Wolf-Rayet stars. A starburst galaxy, like Arp 161, would likely have a strong population of such stars.

The annotated image shows a galaxy cluster, SDSS CE J175.616547+00.441206 northeast of Arp 161 at 3.5 billion light-years. NED shows it with 24 members in a circle 3.8 minutes across. The center of the label marks the center of the cluster. No galaxy marked that point that I could see or NED mentions. One at that distance is seen however it isn\'t marked in NED as a bright core or cD galaxy. Still, it is likely a member of the cluster. Another cluster, MaxBCG J175.68388+00.38916, at 3.2 billion light-years is also northeast of Arp 161. It has 17 galaxies but no size was listed. A bright core galaxy is shown at the same position but without a distance estimate. I show it as GC/G with the galaxy distance a question mark. I\'m not done yet! A third galaxy cluster at 3.2 billion light years, SDSS CE J175.678543+00.482395 is further northeast. It has no galaxy at its core though a red one is just right of the core with the label for it to its immediate left. The cluster is listed as 1.6 minutes in diameter containing 23 galaxies. Don\'t think we are done with galaxy clusters in this image. Mostly east from Arp 161 is the galaxy cluster SDSS CE J175.833755+00.375661 at 3.9 billion light-years. It is 3.6 minutes in diameter with 23 members, one of which has a redshift value of 4.0 billion light-years. I used one label for both though they aren\'t at the same position. The center of the cluster is behind the glare of a bright star while the galaxy, and a second one without a redshift measurement are just southeast of the star\'s glare circle.

Southwest of Arp 161 is a trio of objects. The most obvious a rather large galaxy, MGC 0023433/MGC 0096273 at 1.2 billion light-years. Why it has two designations I don\'t know. Above it is the Ultraviolet Excess Source, SDSS J114150.08+001314.3. At least that\'s how the Sloan survey categorizes it. The MGC calls it just a star as does the 2QZ. But with a measured redshift that puts it 9.5 billion light-years away, it sounds more like a quasar to me. There appears to be a possible tidal tail coming from the galaxy. Apparently, it is the separate galaxy SDSS J114150.87+001307.4 with an unknown redshift. Several other UvES objects with large redshifts are also identified in the image. I assume they are all quasar-like objects. I suppose it is possible they are extreme starburst galaxies but that these distances I find that unlikely. 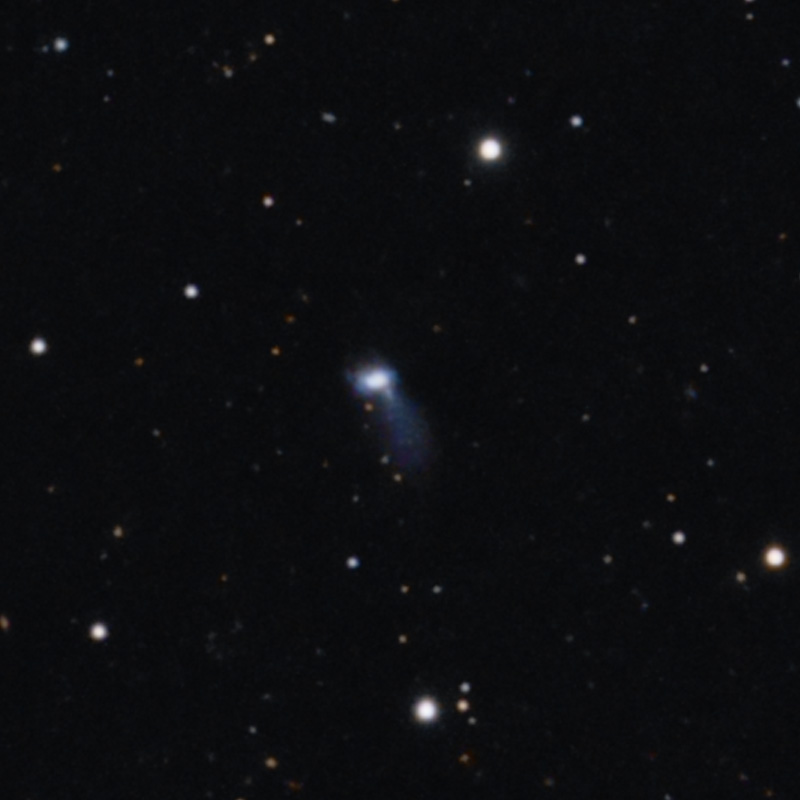 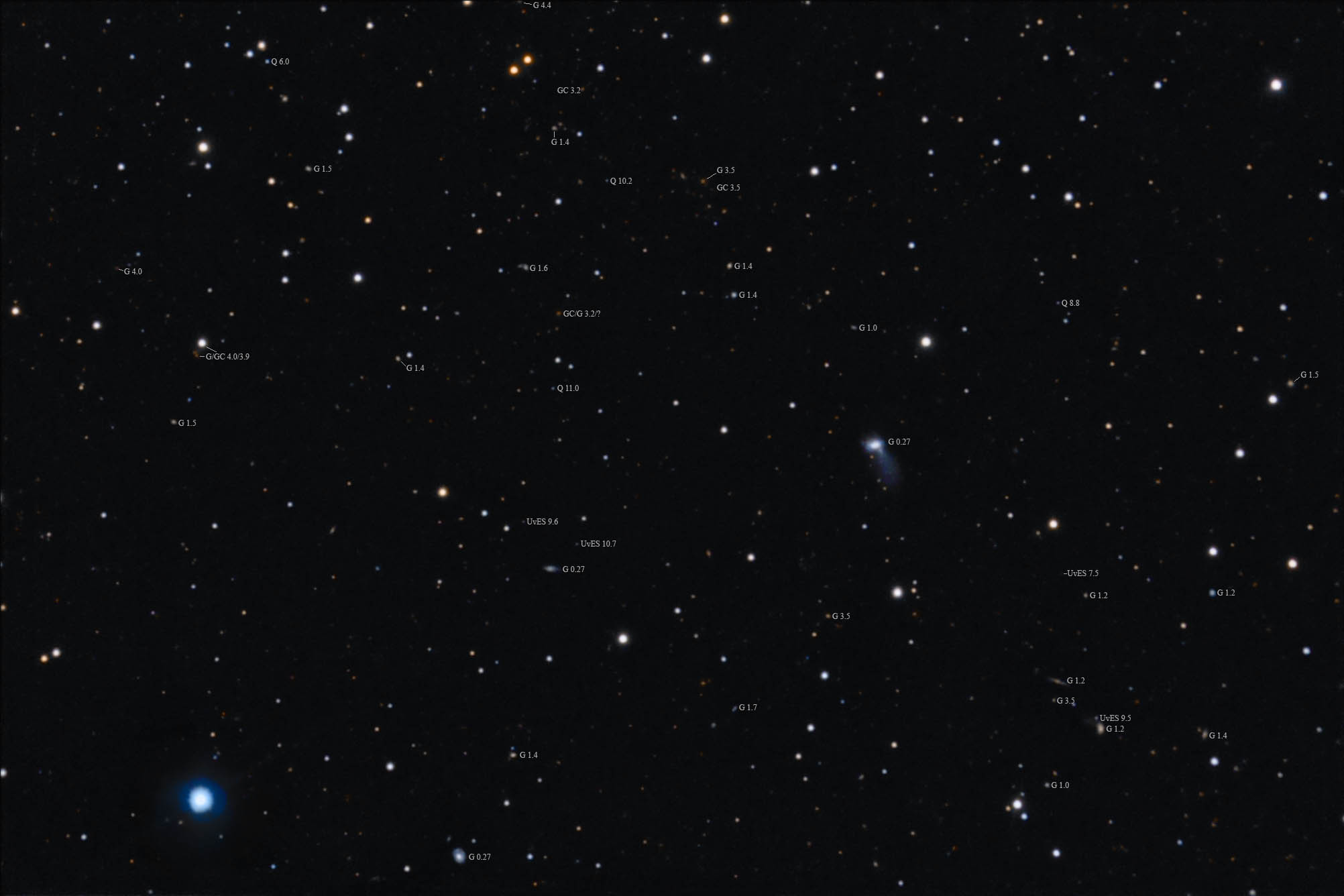 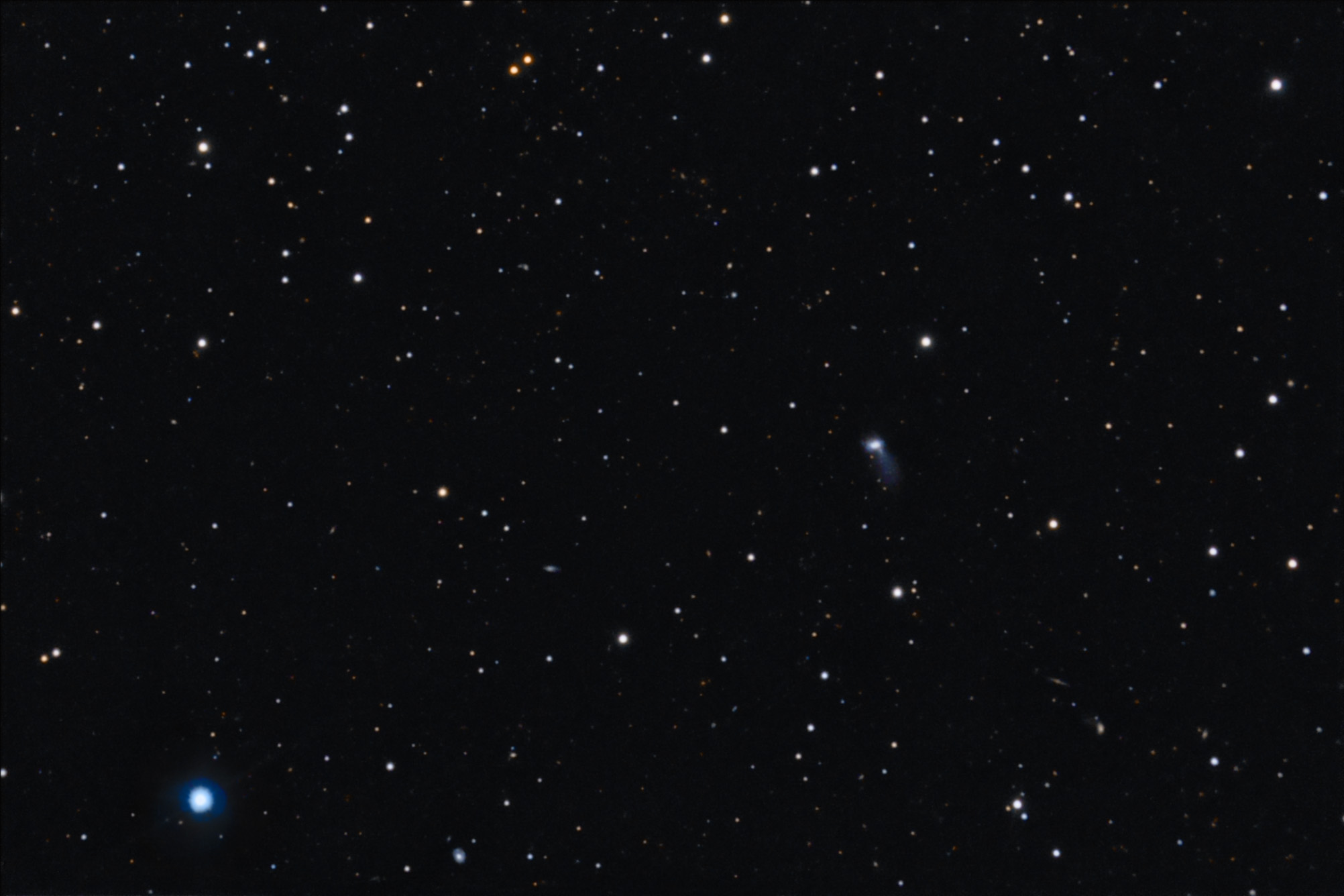