Arp 162/NGC 3414, located in Leo Minor about 80 light-years away is one strange galaxy. Arp put it in his galaxies with diffuse elements (filaments). It shows a huge halo and a diffuse disk. NED classes it as S0 pec. Modern rotational measurements show an interesting twist. The inner parts of the galaxy rotate one direction with maximum measured velocities along the disk as you\'d expect but once you get out further suddenly the velocities slow and then reverse! But now are aligned on a different axis rotated 10 or 15 degrees counterclockwise from the disk. See http://articles.adsabs.harvard.edu/cgi-bin/nph-iarticle_query?2004MNRAS.352..721E&data_type=PDF_HIGH&whole_paper=YES&type=PRINTER&filetype=.pdf for the velocity map and other information. They draw no conclusions. I would suspect this is an indication of a merger. That would explain most of the features. The galaxy was discovered by William Herschel on April 11, 1785. It is in the original Herschel 400 observing program. I don\'t understand my notes from that, however. They were made on April 16, 1985 at 100x with my 10\" f/5 under humid conditions. That apparently limited my ability to see faint objects as my entry reads \"Small, round galaxy. Faint but easy due to its small size. A star-like nucleus seen with averted vision.\" Obviously, I was seeing only its center portion due to the conditions being worse than I realized.

From my image, it appears Arp could have also put it into his category for galaxies with shells. Though they aren\'t visible in his mono image taken in blue light with a yellow filter. I\'m assuming that was done, it was his normal imaging mode. The shells show mostly in red light which he likely wasn\'t seeing. Shells are usually caused by mergers. It shows a LINER spectrum which is often caused by an interaction with another galaxy of some sort. It has two companions at about the same distance. I screwed up my position entry when programming the imaging of this galaxy and used the position of one of the companions, UGC 5958. This put Arp 162 at the top of my image and caused me to miss the more interesting companion NGC 3418 further north. The former has a redshift distance of 68 million light-years but a Tully-Fisher measurement of about 90 million light-years. NGC 3418 out of my image has a redshift distance of 70 million light-years and no other distance estimate. It\'s quite likely all three are actually about the same distance from us.

There\'s yet another member of the group though never mentioned as a companion that I saw. It is SDSS J105137.14+274919.6 at a redshift distance of 75 million light-years. It is east and a bit south of UGC 5958. It is classed as a dwarf though seems as large in angular size as UGC 5958 just with a much lower surface brightness. There are other galaxies closer to Arp 162 that are far smaller with similar redshift distance. These are noted in the annotated image. There\'s an obviously close galaxy similar to and further east and south of SDSS J105137.14+274919.6 that has no distance data. Many other dwarfs without distance data may also be members of the group.

The image contains at least 10 quasars, all in the upper 2/3rds of the image. One of them has a redshift of z=3.9 which translates to a light travel time of 12.2 billion light-years. A z of 3.9 means the light I imaged was well into the far ultraviolet region when it left the quasar. Most of its ultraviolet light is now seen here as infrared light it has been so red shifted. The quasar is now so far from us, nearly 24 billion light-years, that light it emits \"today\" will never reach us. The expansion of the universe will keep its \"current\" light forever beyond our reach. I use quotes because these words have no real meaning in Einstein\'s universe at these distances and speeds.

Many distant galaxies are in the image. Some with redshift data are over 4 billion light-years light travel time from us. They must be very large and bright galaxies for me to pick them up. My limiting galaxy magnitude is about 23 for this image. Must have been a good night. 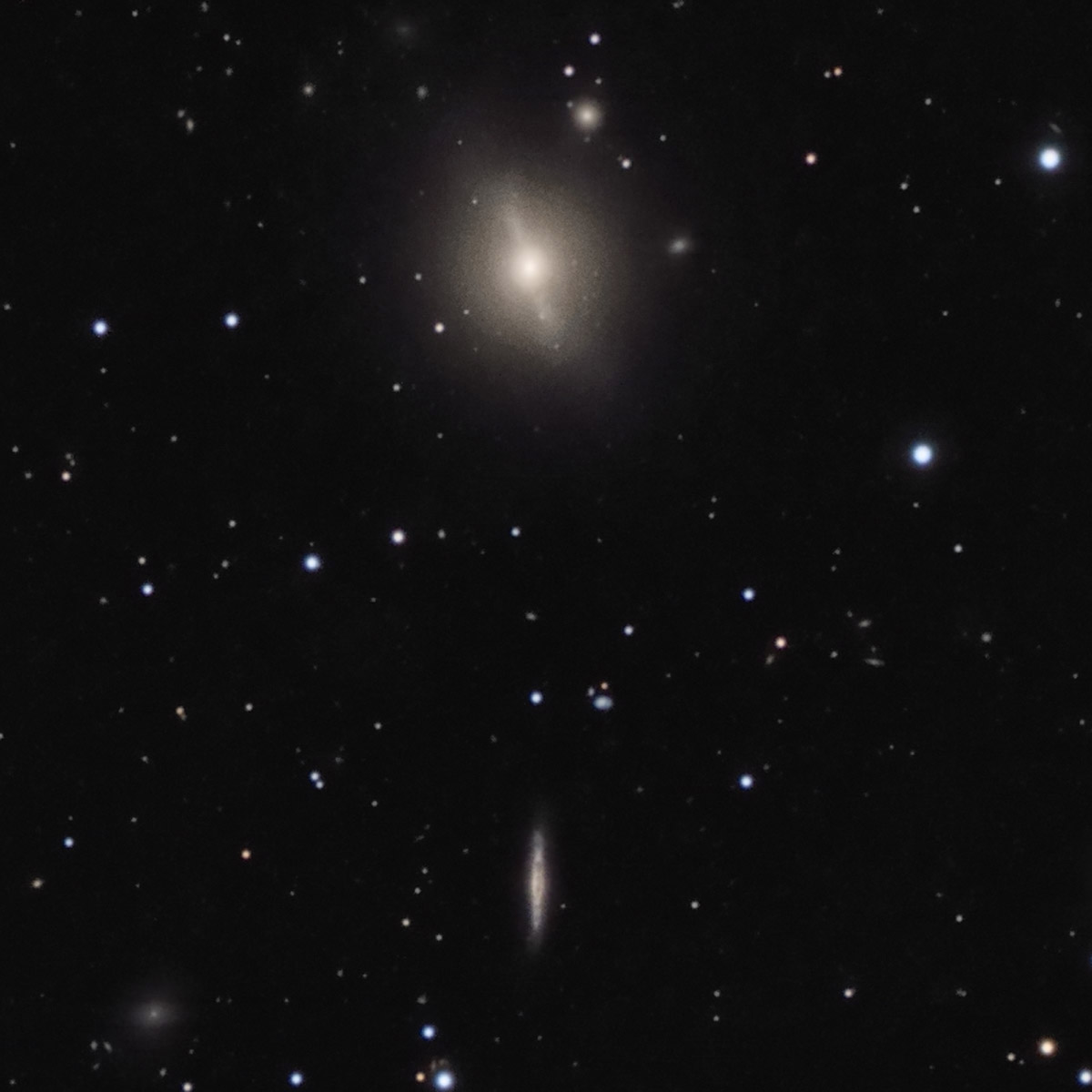 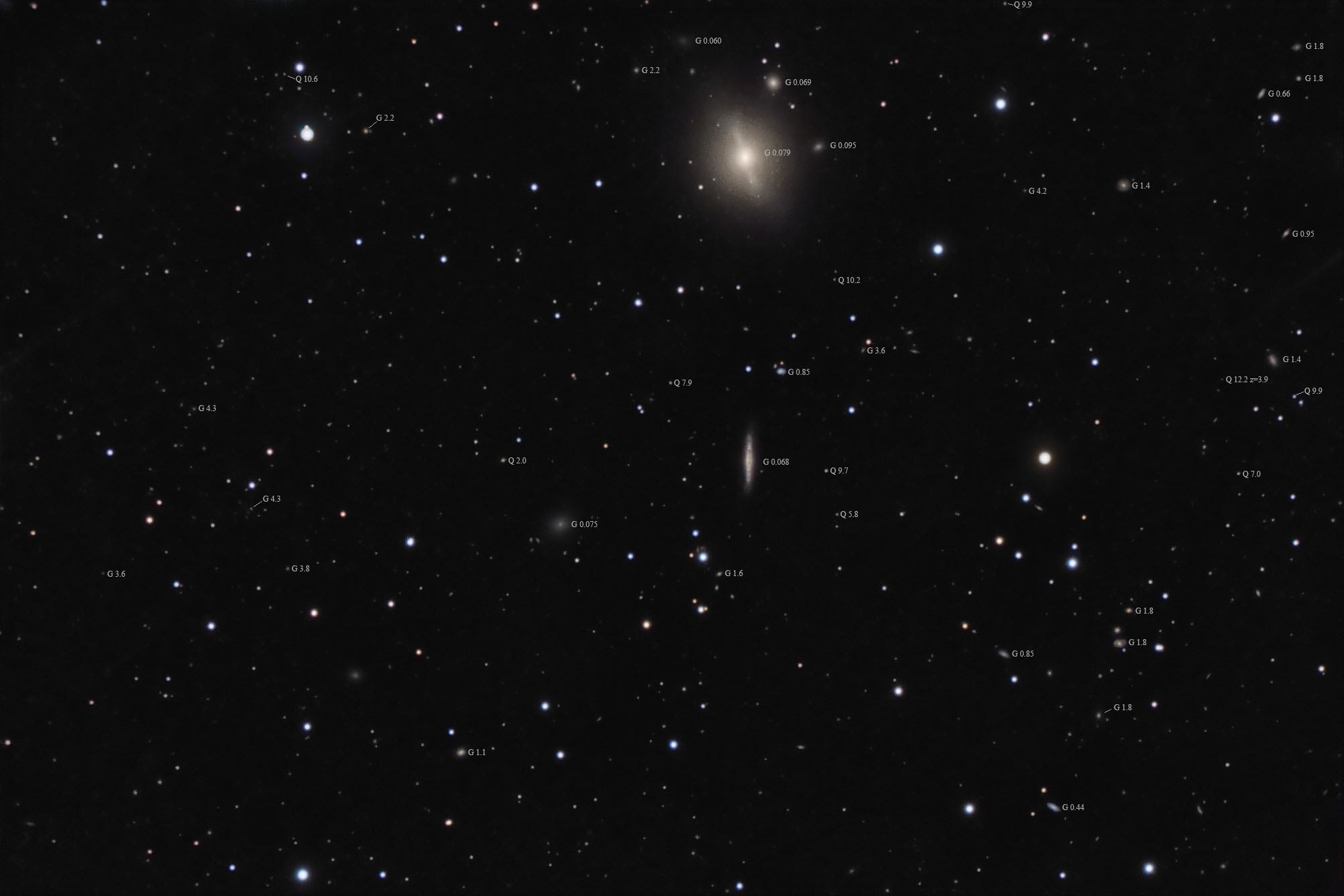 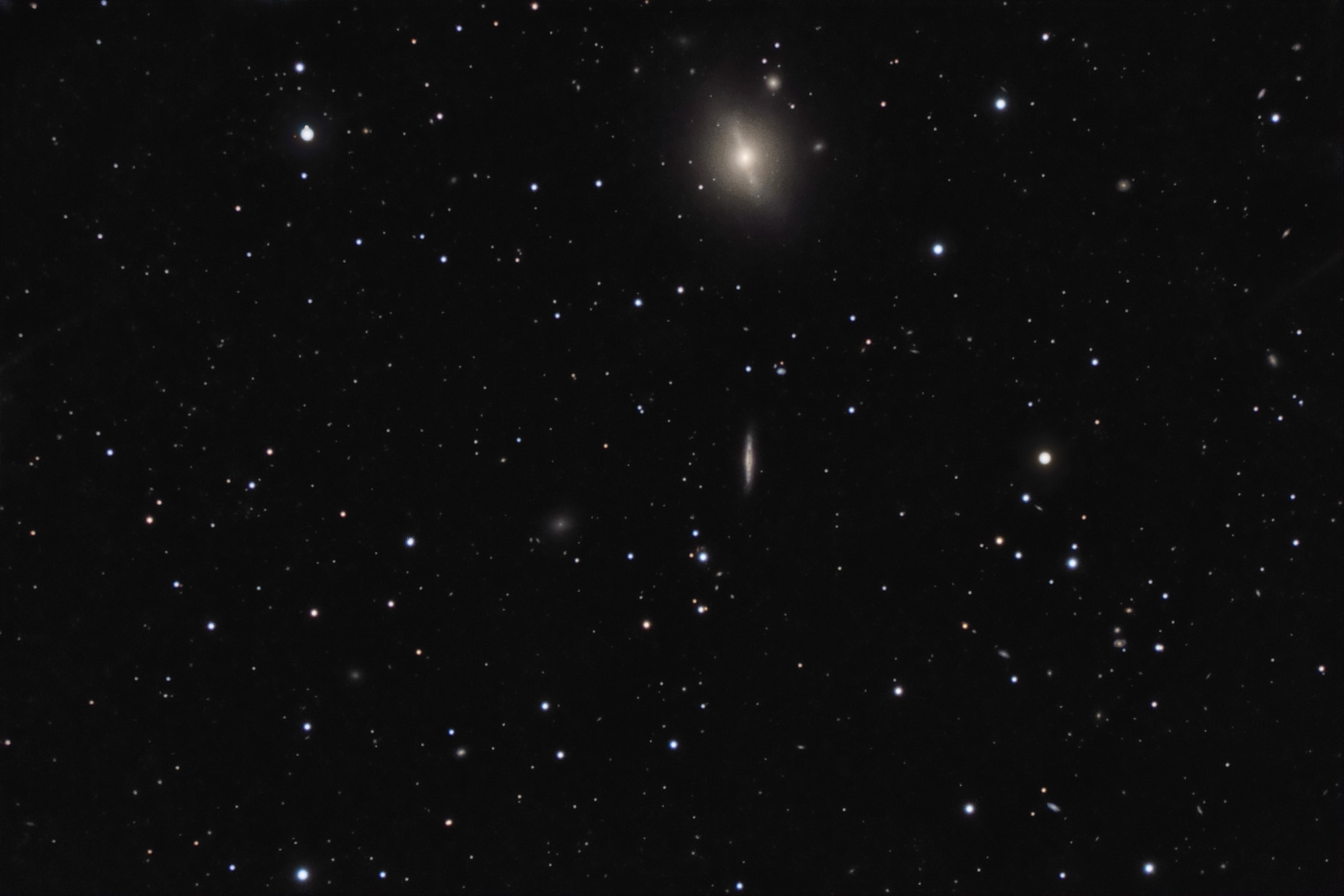