Arp 163/Haro 09/NGC 4670 is an SB(s)0/a pec: BCDG galaxy in Coma Berenices. BCDG means Blue Compact Dwarf Galaxy. If the distance is 60 million light-years as its redshift and a couple other sources indicate then it is about 27 thousand light-years in size. Some sources put it only 36 million light-years away which cuts it down to 16 thousand light-years which certainly is a dwarf galaxy. Arp put it in his class of \"galaxies with diffuse filaments, diffuse counter-tails.\" He left no comment about it. I can\'t see either filaments or a counter tail. Today it is thought to be rapidly forming stars but not at the starburst level. Still sufficient to color the galaxy blue due to the massive and thus bright blue stars it is making which cover up the far more common but much fainter main population of red stars.

With normal stretching or any of the canned stretches found in many programs as well as DDP and other techniques, the core showed just a bright white oval. I had to do some rather strong processing to hold back the core while the rest of the image was stretched to show what detail I was able to capture in the core region. The HST image of the core shows it better. That image is oriented with north to the lower right corner of the image while north is straight up in my image. The HST image (link below) is taken using near-infrared light for red with very blue light for green and near ultraviolet light for the blue channel. So the image is false color and won\'t match my visual light colored image. The Haro catalog entry describes it as \"Muy violeta\" which translates from Spanish to very violet indicating the UV light from these new stars really does color the galaxy. The Haro catalog is a catalog of blue galaxies and UV excess sources that have emission lines.

After I looked at Arp\'s image with the 200\" Palomar telescope taken mid 60\'s I was expecting a rather featureless S0 or E galaxy so when this blue galaxy with star clouds and dust lanes showed up I first thought I\'d missed my target. It\'s not often I can get this much more detail than Arp did using the world\'s largest telescope of its day. His log does show seeing as below normal for this image. Still, it is nice to beat the socks off that monster scope even with the help of modern technology.

The other NGC galaxy in the image is NGC 4673. While it appears slightly smaller it is some 5 times further away so actually much larger, about 120 million light-years across. That makes it more massive than our galaxy. It is classed E1-2 by NED and some other sources but S0: by the NGC project and a few other sources I looked at. So flip a coin. In any case, it appears to be a shell galaxy to me. At least I see what appear to be faint shells about it. If so it is the result of a merger in the past. Maybe several mergers. Oddly much literature refers to NGC 4670 and 4673 as a non-interacting pair. Since one is 6 times the distance to the other they aren\'t a real pair except as seen from our galaxy and others in the line of sight and couldn\'t possibly be interacting.

On the upper right below a bright star is the odd pair ASK 577888.0 and ASK 578732.0. The latter appears to be a knot in the former but NED doesn\'t call it part of a galaxy. It could be this is an interacting pair. This would explain the odd arm on the right side. I found absolutely nothing on this pair, however.

NGC 4673 seems to be the center of a rather large group of galaxies. At least there\'s a surprising number at its redshift in my image. This includes the ASK galaxies mentioned above. I found no cluster or galaxy group listed for the field, however. Though I didn\'t look far beyond the bounds of the image. There\'s another group at about 1.3 billion light-years also without a designated group or cluster.

Both NGC galaxies were discovered by William Herschel on April 6, 1785. Neither are in a Herschel 400 observing program.

Also in the image are two very distant quasars. Using NED\'s 5 year WMAP calculations the one in the upper right is 11.55 billion light years distant while the one on the left is 11.88. At these distances, things are very confusing. Redshift while linear at say 300 million light-years (double the redshift and the distance doubles) it is far from linear at these distances as the redshift z value of the former quasar is 2.989888 while the later only slightly further away is 3.439000. This also means the light was so severely redshifted most of it went out of the passband of my CCD so it is very faint. A z of 3.4 means the wavelength of each spectral line is 4.4 times longer than it was when emitted. Shifting Ultra violet into the infrared part of the spectrum. Also while it was only 5 billion light-years from us when its light was emitted those 11.88 billion years ago, the light had to travel those extra 6.8 billion years thanks to the ever-expanding universe. In those 11.88 billion years it has been moving away from us at an ever-increasing speed and is now some 22.5 billion light-years away. So the expansion of the universe has carried it 17.5 billion light-years in 11.9 billion years. Yes, the universe can and does expand faster than the speed of light. That means the light it emits today (if it even exists today) will never reach us. The fact the universe was much smaller 11.88 billion years ago than it was when the other quasar\'s light left it plus this faster than light expansion plus relativity issues create the very counter-intuitive situation that the quasar we now see 11.55 billion years later was 5.3 billion light-years distant when its light left. Yes, it was further away but its light got here quicker as it didn\'t have as far to go through the ever-expanding universe. These figures are using NED\'s 5 year WMAP calculator. I didn\'t do the math, NED did it. You can enter your own parameters and rerun the calculations if you don\'t like this result. Now, where\'s the Jack Daniels when I need it?

Arp\'s image with the 200\" Palomar telescope (north to the left)
http://ned.ipac.caltech.edu/level5/Arp/Figures/big_arp163.jpeg

The HST image of the core region can be seen at:
http://upload.wikimedia.org/wikipedia/commons/thumb/f/fe/NGC_4670.jpg/622px-NGC_4670.jpg
I don\'t know who assembled it from images at the Hubble Legacy Archive site. North is to the lower right corner. 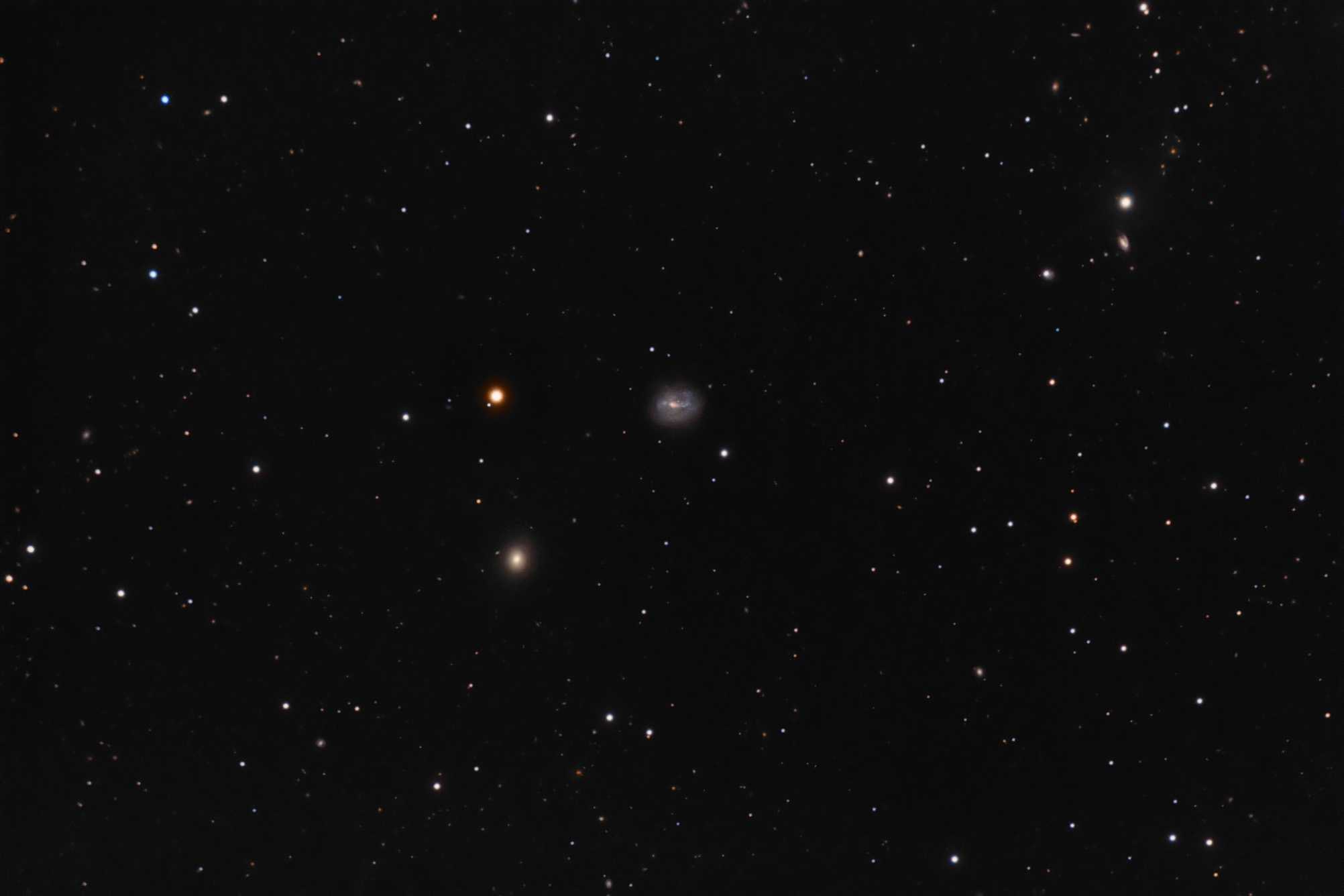 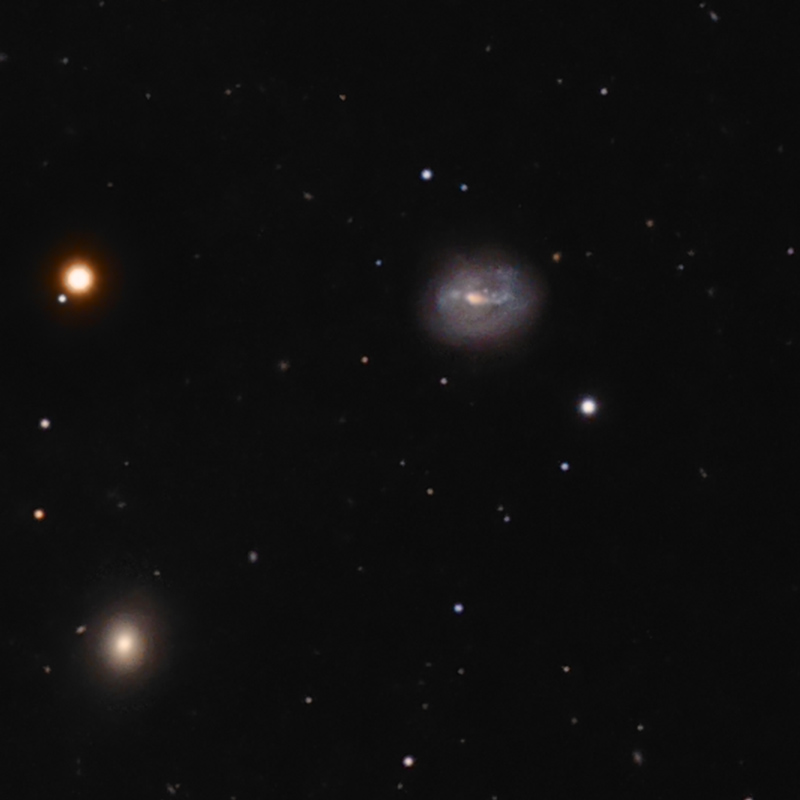 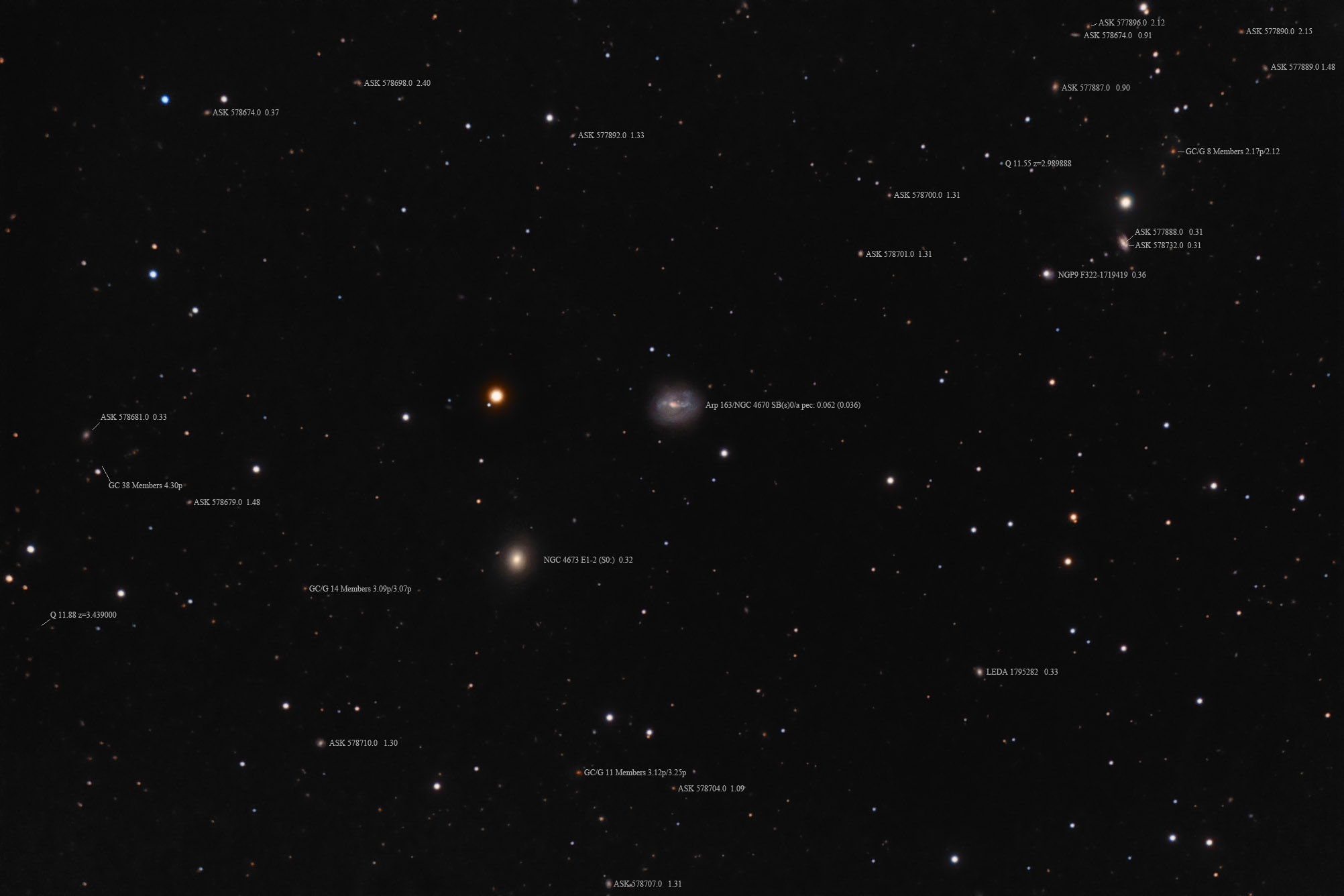