Arp 166 is composed of two interacting elliptical galaxies NGC 750 and NGC 751 (lower). Both are classed E pec though one source says they are two normal E0 galaxies. While the NGC project classes them as E1 and E respectively. Redshift data puts them about 225 million light-years away in the constellation of Triangulum. Arp put the pair in his category; Galaxies (not classifiable as S or E), with diffuse elements. Note the bright short bridge between the two galaxies. Arp didn\'t mention this feature, however. His only comment refers to a third galaxy saying \"Small spiral at end of plume.\" The galaxy wasn\'t cataloged at the time of Arp\'s comment. Now it is known as 2MASX J01572652+3314452. I find little on it, however. It is likely unrelated to Arp 166 however. Did it have anything to do with the plume? I doubt it as the interaction of the two elliptical galaxies could easily account for it though its alignment is suggestive of more than a coincidence. NGC 750 was discovered by William Herschel on September 12, 1784. It\'s not in either Herschel 400 observing program. He found others in this field that night as well. NGC 751 was discovered by Bindon Stoney on October 11, 1850. He found several others in this field that same night as you will see below.

There are many other galaxies in the field but many of them, other than the brightest or IR galaxies aren\'t cataloged at NED. Several though are NGC objects. At the top of the image, partly out of frame is NGC 761, an SBa galaxy about 218 million light-years away so likely related to those in Arp 166. It was discovered by Bindon Stoney on October 11, 1850. The double star below it is NGC 760. In the rush to find and catalog galaxies many such double stars were seen as galaxies, some single stars as well. The misidentification was made by Ralph Copeland on December 19, 1873. He was using Lord Rosse\'s 72\" scope at the time yet still made the mistake. Photography has greatly reduced but not totally eliminated such errors.

NGC 739 is the S0? galaxy 40% of the way to the upper right corner. It is about 200 million light-years away per redshift data. It was discovered by Ralph Copeland on January 9, 1874. Copeland got its position in relation to NGC 750 correct but then described it is south preceding rather than north preceding. This has led to some catalogs considering it lost but since its coordinates in relation to NGC 750 are correct there\'s no doubt this is the galaxy he saw.

NGC 736 is the large elliptical galaxy toward the lower right. Notes refer to an outer halo or pseudo outer ring. Does this include to the odd plume to the north that spreads out east and west at the top making a ring arc? That reminds me of the Umbrella Galaxy, Arp 189/NGC 4651. Its redshift indicates a distance of about 190 million light years. Could the plume be due to a galaxy it ate? That is what caused the Umbrella Galaxy\'s similar plume. It was discovered by William Herschel on September 12, 1784. It isn\'t in either Herschel 400 program. NE of it is NGC 738 at 189 million light-years, a much smaller, elliptical red compact galaxy. To the southeast of NGC 736 is NGC 740 described as a very red spindle and classed SBb?. Redshift says 199 million light-years. Other measurements vary between 178 and 215 million light-years with a weighted average of 201 million light years in good agreement with RS data.

Another NGC galaxies around NGC 736 is NGC 738. NED doesn\'t classify it. The NGC project says C which likely stands for compact. Seligman says S0? which seems more correct to my eye. It was discovered by Bindon Stoney on October 11, 1850. NGC 740 is listed as Sb? or SBb??. It was discovered by William Herschel the same night he found NGC 736, September 12, 1784 according to some sources. Others say he didn\'t see it and it wasn\'t found until the night that Stoney found NGC 738. Seligman votes for Stoney. It isn\'t in either Herschel 400 programs. The same night Stoney found stars within NGC 736 that are recorded as NGC 737. Some sources call all three NGC 737 while others say it is just the center star.

Then there\'s NGC 733 also found by Stoney the same night as the others he found. Most likely it is the star the annotated image points to but some sources equate it with PGC 7255 so I drew lines to both. To add to the confusion NED indicates the star is PGC 7255 and NGC 733 while my The Sky program shows the galaxy as both as does SIMBAD.

Some of the fainter galaxies of interest include 2MFGC 01479 (2MASS Flat Galaxy Catalog) which is 70% of the way from Arp 166 to the 15th magnitude NGC 739. In K band IR light this little guy shines at magnitude 14, a full magnitude brighter than NGC 739 in visual light! A short hop east and a bit north brings you to VI Zw 116 just 6\" south of a star. It is a Red spherical compact galaxy that is also an IR bright galaxy.

Besides the full image, I\'ve included a 125% enlarged crop of the pair which shows the bridge between them a bit better than the normal size image. It also includes the asteroid and an inset of NGC 736. 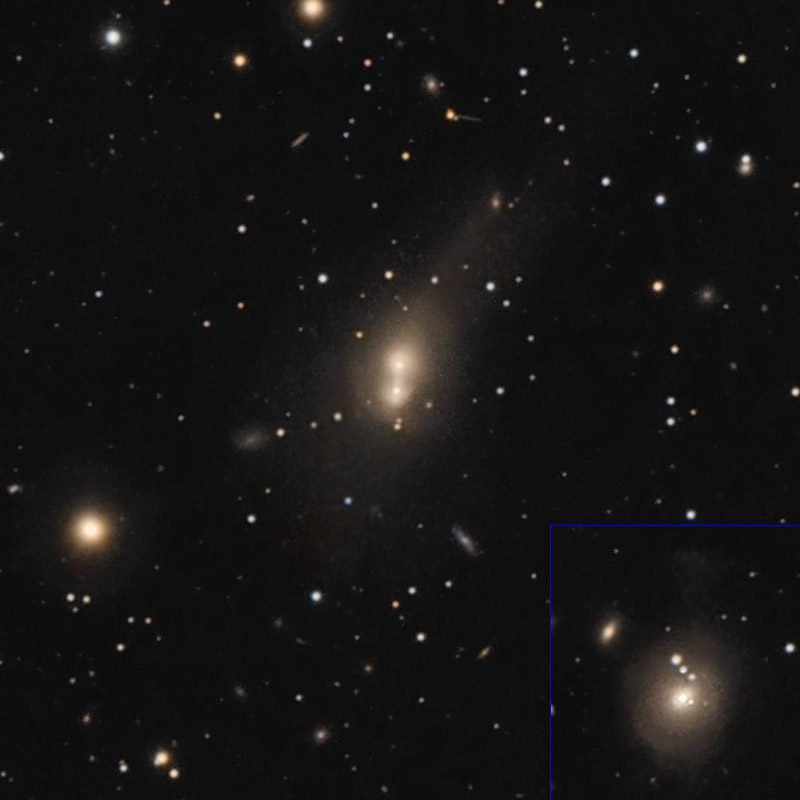 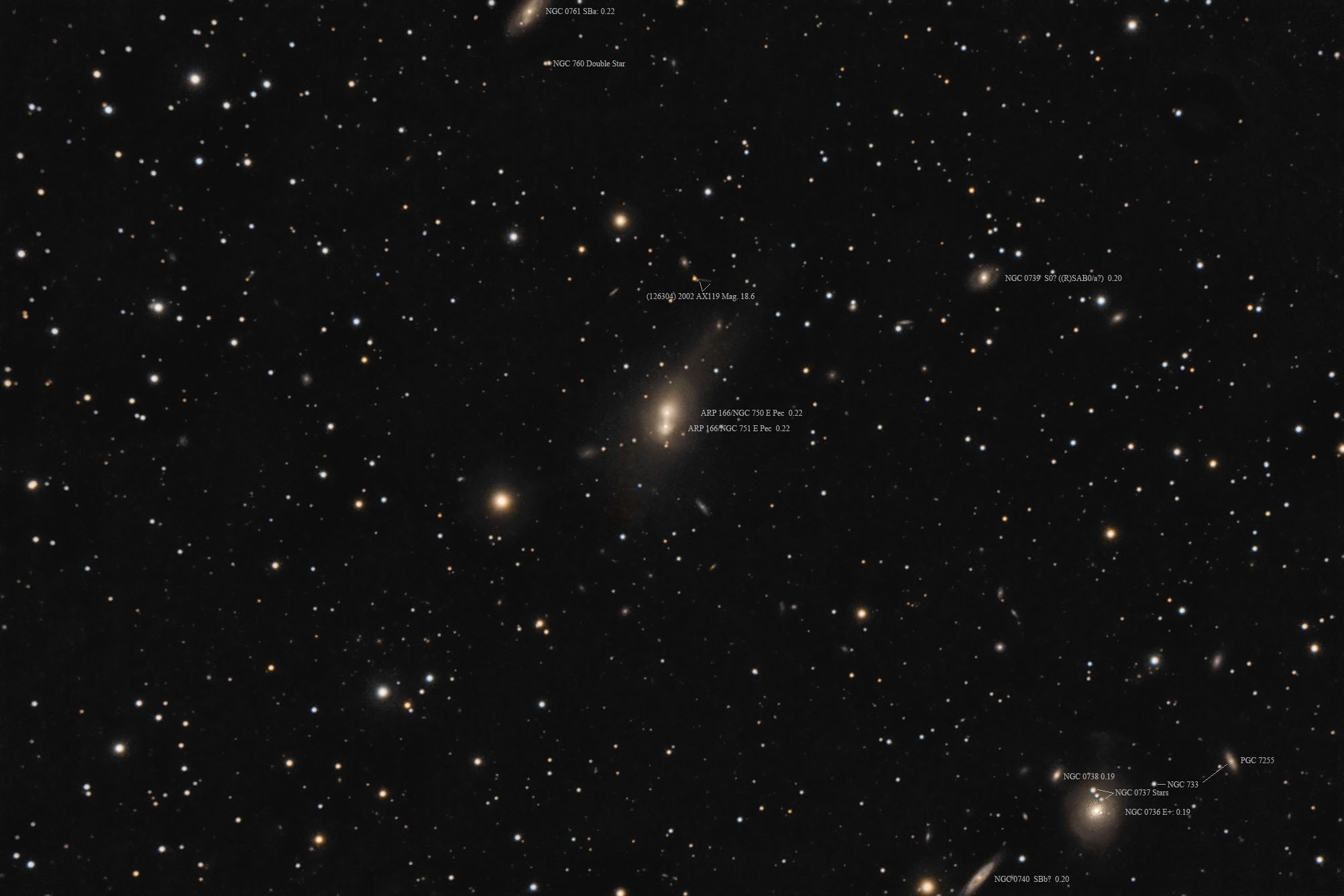 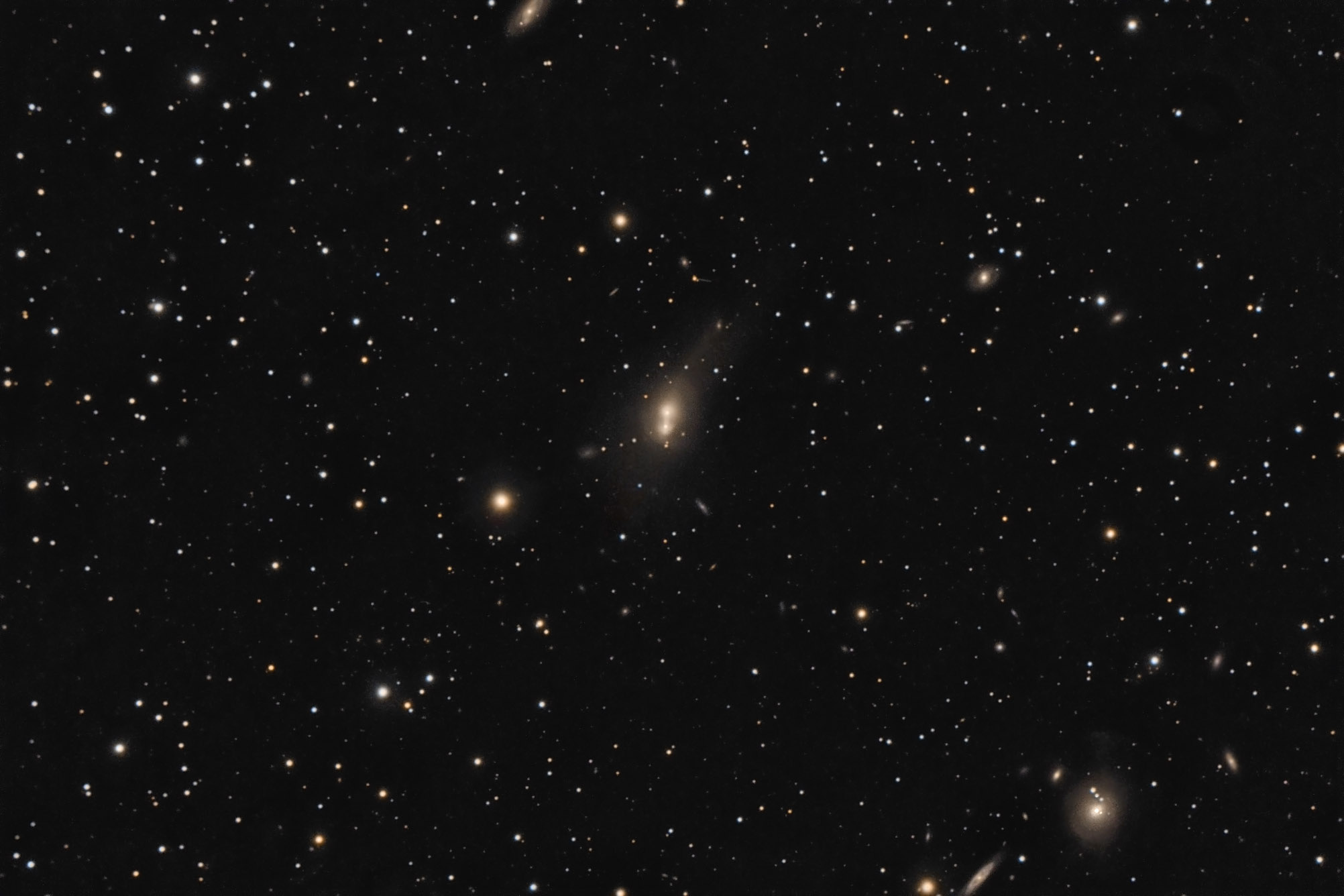