Arp 167 is a pair of interacting galaxies located in Cancer, just east of M44, at a distance of about -- Houston we have a problem. There seems to be some uncertainty about these two galaxy\'s distance.

The two galaxies are NGC 2672 and NGC 2673 right to left. NED classes them as E1-2 and E0 pec respectively. Arp put them in his class of Galaxies with Diffuse Counter-tails saying; \"Companion galaxy very condensed, has curved plume.\" NGC 2672 was discovered by William Herschel on March 14, 1784. It isn\'t in either Herschel 400 observing program. NGC 2673 was discovered by George Stoney on December 19, 1849.

Now back to the problems. While I called them interacting galaxies some papers say they are non-interacting. I see two reasons for this. First only NGC 2673 seems distorted. You\'d think if they really did interact NGC 2672 would show some sign of it but I don\'t see any. The other reason is the redshift distances are different. By redshift, NGC 2672 is about 211 million light-years distant while NGC 2673 about 185 million light years. Relative speed in a galaxy group, however, can vary by this much and more. So it could be they had a fast interaction due to their high relative speeds. Still, you have the problem of NGC 2672\'s lack of apparent distortion. Yet most sources do consider them interacting and one puts them both at a distance of about 167 million light-years using the D-Sigma method. See http://adsabs.harvard.edu/abs/1994AAS...185.5217G for more on how this works for elliptical galaxies. Does it work for peculiar ones? Or was this just a measurement of NGC 2672 and NGC 2673 was assumed to be the same distance? I can\'t tell from the abstract. For now, I\'ll say they are interacting as I don\'t see any other candidate for the distortion. A large galaxy can survive such an interaction without much distortion.

Zwicky shows a galaxy cluster centered about 7 minutes south-southwest of Arp 167 with over 250 members and a distance of about 200 million light years. It covers an area almost 2 degrees across so goes far outside of my frame. It is listed as UGCl 131/ZwCl 0846.3+1910.

I\'ve provided an annotated image showing distances to (G) Galaxies and (Q) Quasars. As usual, the label is to the immediate right of the object when possible. A line points to the object when it might not be obvious. The quasar east of Arp 167 appears elongated north/south and not a point source. NED gives two SDSS designations for it, one labeled quasar (main one) and a second one labeled galaxy though the quasar designation is the default one. It\'s about the same distance as a much brighter galaxy so seems dim for a quasar. I\'ve given it a Q label as that is NED\'s preferred designation. It looks more like a galaxy to me. Compare it to the far more distant but brighter quasar to the northwest of Arp 167 at nearly 11 billion light years.

There are two asteroids in the image. The bright one is just southeast of Arp 167 and is named (23153) Andrewnowell and is at an estimated magnitude 19.1. The dedication for its name reads: \"Andrew John Nowell (b. 1988) was awarded first place in the 2007 Intel International Science and Engineering Fair for his electrical and mechanical engineering project. He attends the Nottingham High School, Nottingham, England.\" The other one is hiding in the north end of NGC 2677. It is (118611) 2000 GG143 shining at an estimated magnitude 20.0. 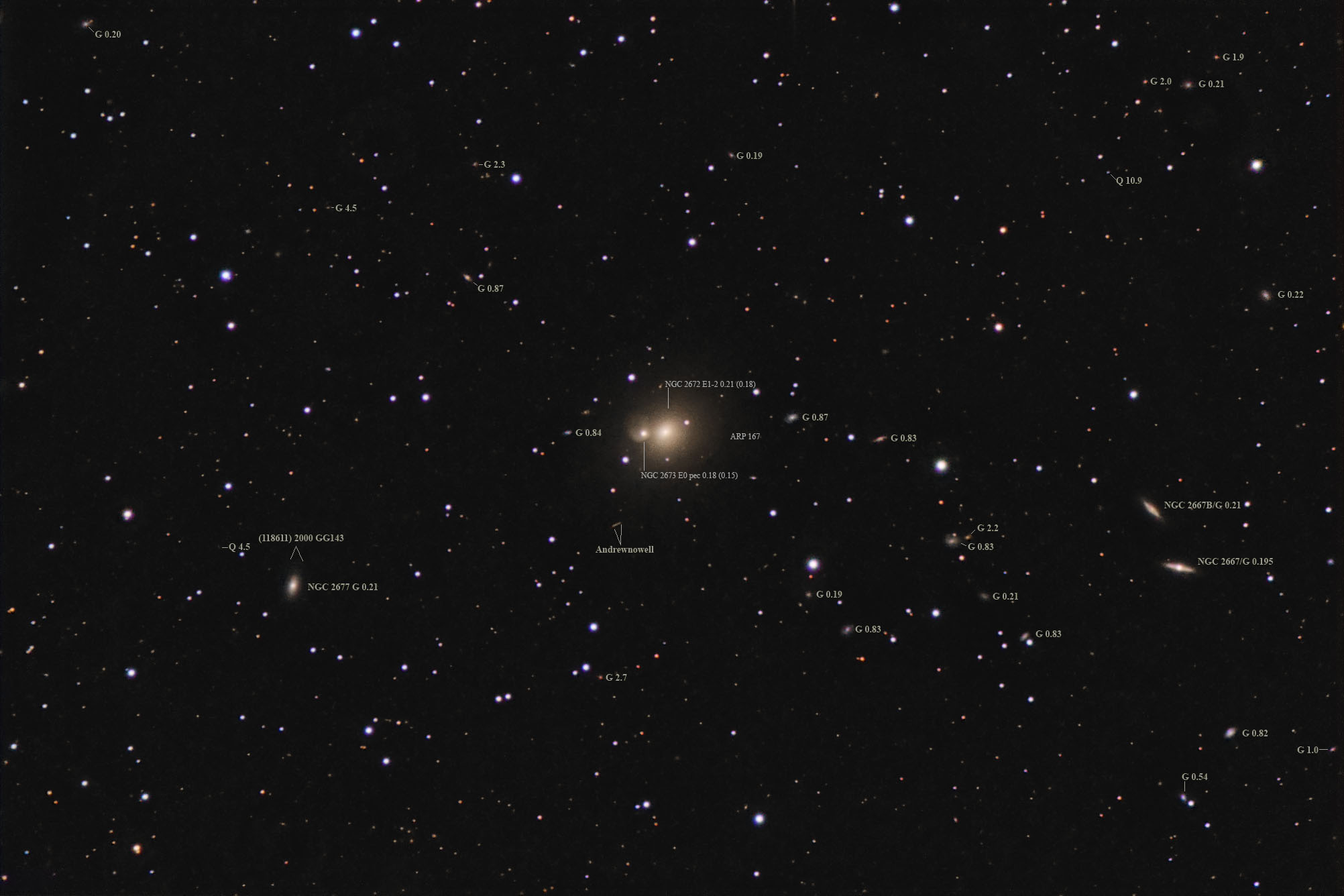 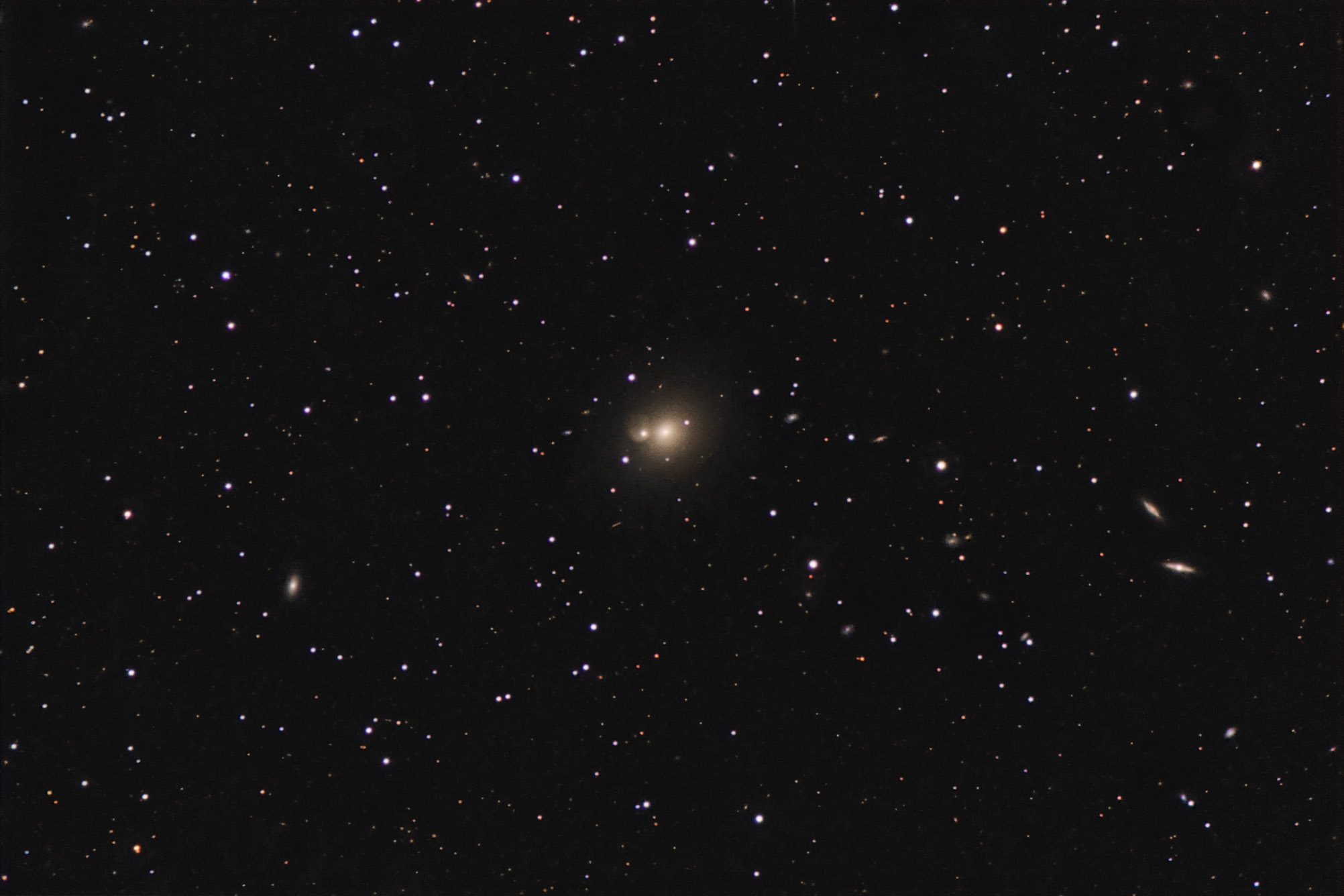 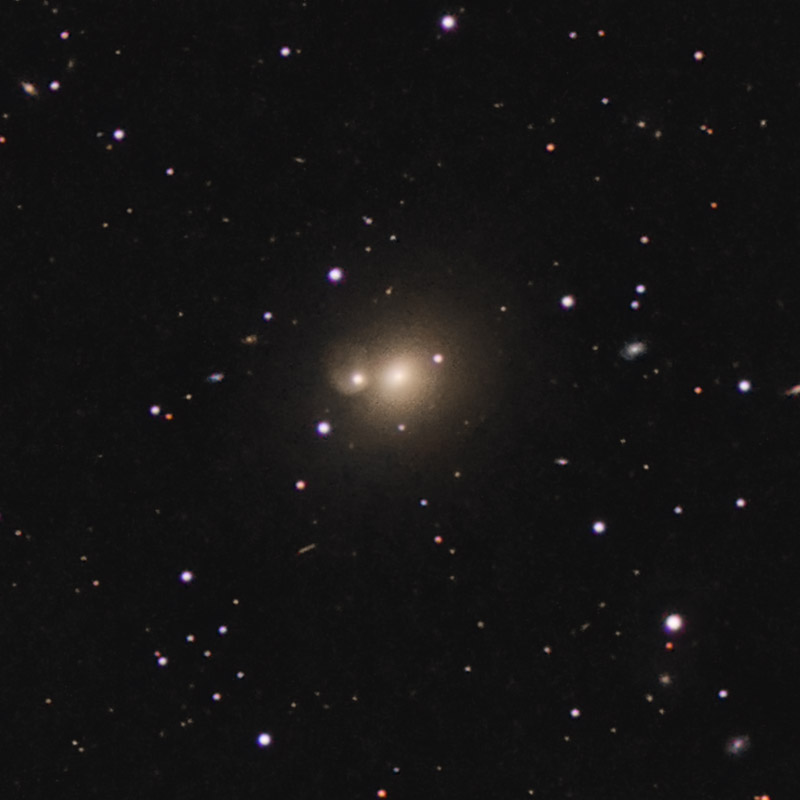