Arp 169 is a trio of galaxies sharing a common envelope of stars, or at least they appear to. Redshift would put these at about 340 million light years. But studies using the D-sigma method which is often quite accurate when applied to elliptical galaxies put the distance much closer, say about 280 million light years. The group appears to be part of the ZWCl 2212.0+1326 galaxy cluster, a group of some 138 galaxies about 340 million light years distant. If so then the redshift distance to Arp 169 is probably correct. I suspect that the fact these are S0 galaxies and share a common halo has skewed the D-sigma calculation. Still, this galaxy cluster has galaxies with redshifts that match the D-sigma value as well. In any case its a ways from us. I\'ve marked the approximate center of the cluster and its details on the annotated image. The center is just left of the annotation. Thus much of it is off the southwest portion of my image. It\'s size being 44\' in radius fully covers my frame even this far off center.

Arp 169 is Arp\'s class: Galaxies (not classifiable as S or E) with diffuse counter tails. I see mostly a common envelope of stars, not a counter tail. I think Arp is referring to the somewhat north-northeast extension of the halo off the upper right galaxy NGC 7236. The middle galaxy is NGC 7237 with the small galaxy to the southeast being NGC 7237C/PGC 200377. Arp\'s comment; \"Faint diffuse plumes coming away from two galaxies. 3C442.\" This would indicate he sees a plume from NGC 7237 or 7237C as well. I see a hint of one, maybe. The reference to 3C442 is because it seems to be coming from the core of NGC 7237 a radio galaxy also known as 3C442. This could be a sign they are actually interacting causing its black hole to be very well fed at the moment. While one source describes these as elliptical galaxies with no sign of recent star formation most describe all three as blue compact S0 galaxies. From the color of the halos in my image, I\'d agree with the latter. The halo doesn\'t have the orange color most always seen with elliptical galaxies. Though there are some exceptions 3 in one spot would seem a bit too much of a coincidence to me anyway. The two NGC galaxies were discovered by Albert Marth on August 25, 1864. I measure the full extent of the halo that surrounds all 3 galaxies as about 250,000 light-years assuming a distance of 320,000,000 light-years.

While most galaxy clusters are populated with elliptical galaxies as their most common members this cluster seems to be mostly S0 galaxies. I don\'t recall seeing so many on one image before. One of the few exceptions is the face on, low surface brightness spiral south and a bit west of Arp 169. It is PGC 068368 a 15th magnitude galaxy. NED describes it as a Malin-like galaxy. These are usually huge low surface brightness galaxies but this one is only slightly larger than our galaxy at 125,000 light-years.

The annotated image shows all galaxies and quasars NED had redshift for. There\'s a very blue quasar at 8.4 light years right beside a galaxy that is quite likely far closer than the quasar. The most distant galaxy I know of in the image is about halfway toward the lower right corner. It is SDSS J221402.08+134424.9 at a magnitude of 21.1. It must be a big one for me to see it at a distance of 4,300,000,000 light-years. It anchors a group of 17 galaxies toward the lower right corner. The cluster\'s distance is by photographic spectroscopic methods (p) which gives only 4.04 billion light-years for the distance. The measurement of the galaxy itself is likely more accurate. 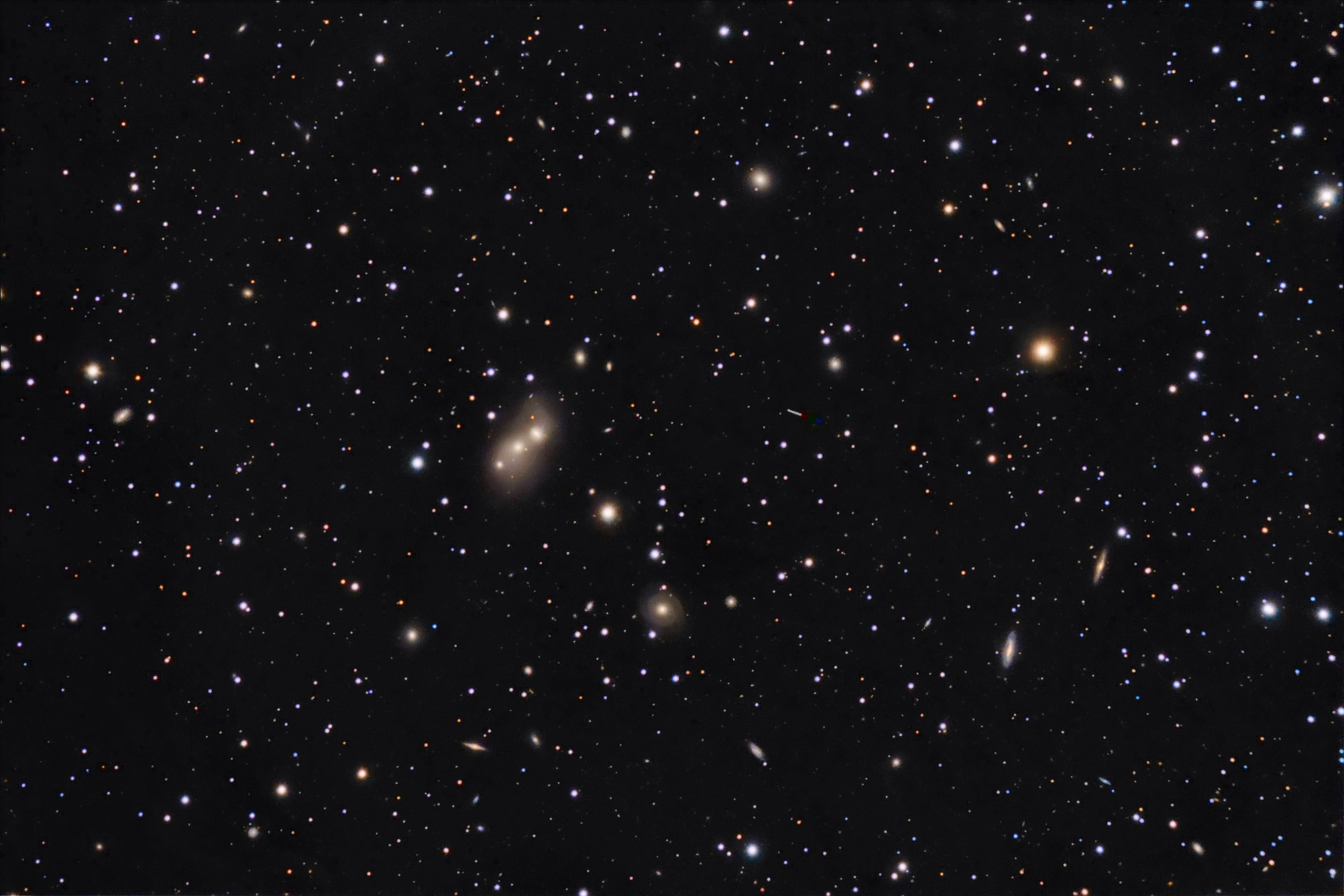 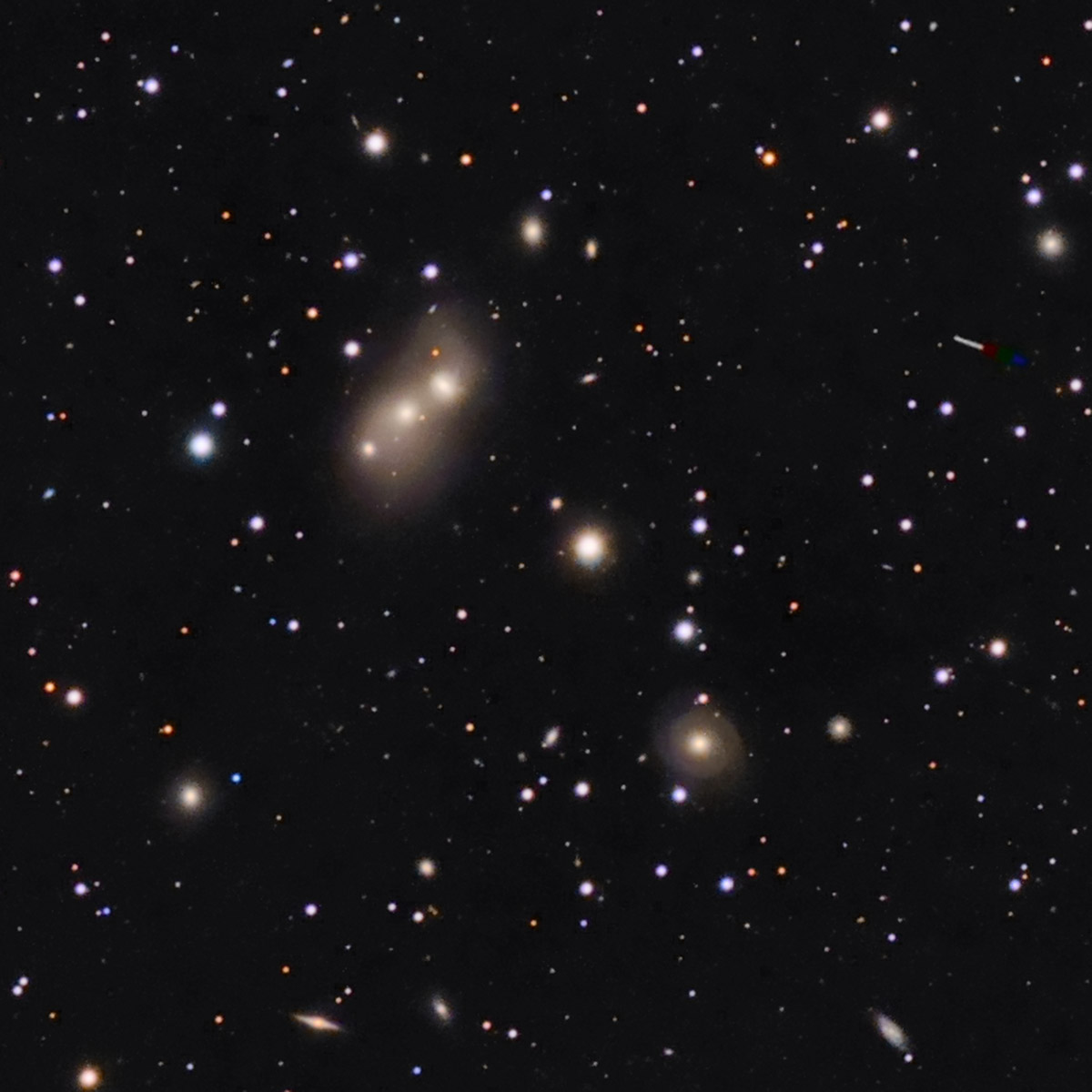 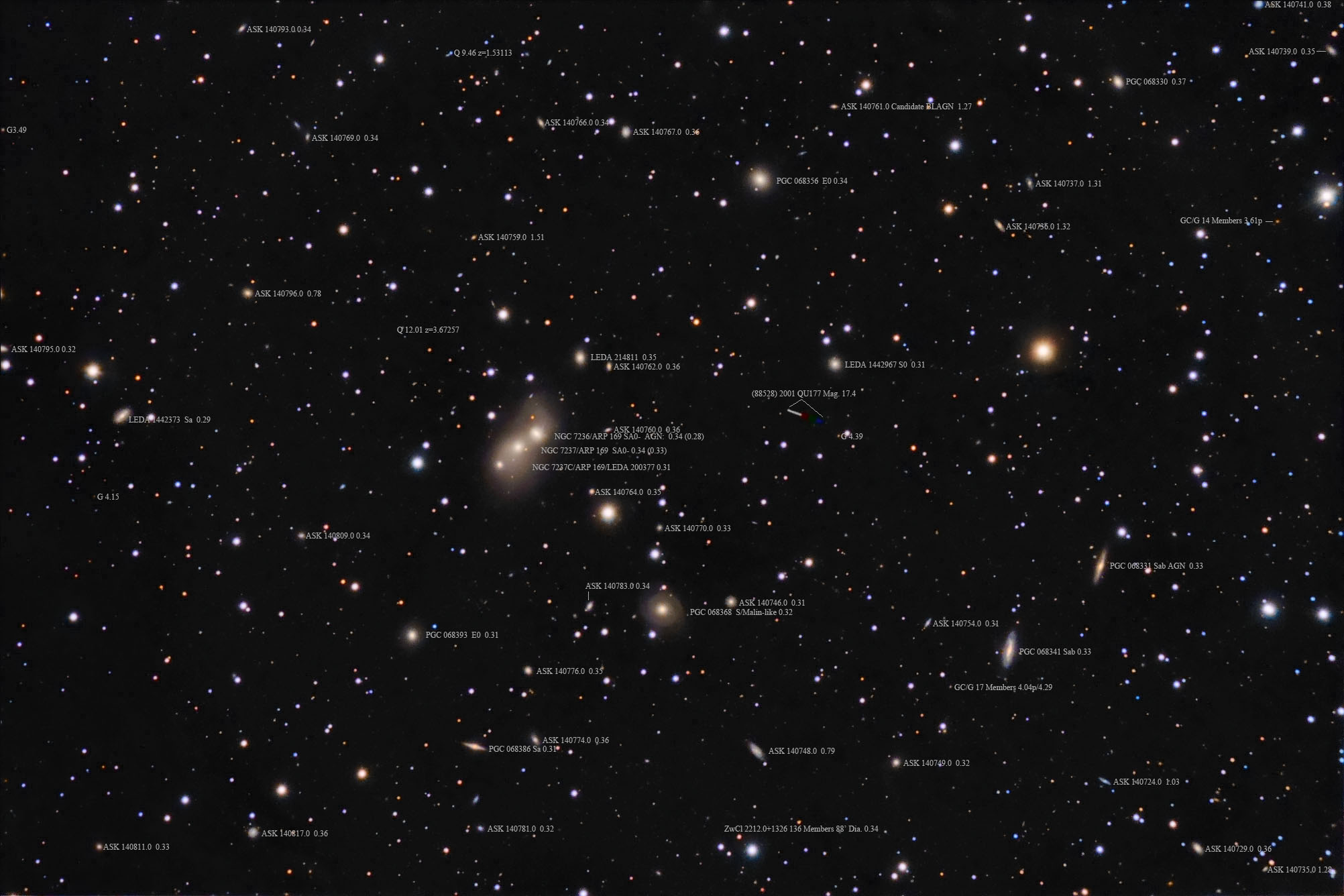