Arp 173/UGC 9561 is a pair of galaxies about 410 million light-years away in the southeastern corner of Bootes. The northern galaxy is MCG +02-38-20/PGC 53053 while the southern is MCG +02-38-19/PGC 53054. The northern one is classed S0 by NED which I find puzzling as it seems to have too much structure for that classification. The southern one is classed simply as S? Except for the plume, it seems to fit the S0 class. Makes me wonder if NED reversed these classifications. The PGC designations also appear reversed as normally they are in RA order but that is not the case with these two. In any case, Arp put this in his class for galaxies with narrow counter tails. There is certainly a nice narrow plume heading south and a bit west from the southern galaxy. There appears to be a broad plume toward the northern galaxy as well. Several plumes extend in various directions from the northern galaxy. Obviously, these had a close passage by each other in the recent past. One paper indicates the authors think the northern galaxy should be designated as a Seyfert 2 galaxy. NED apparently disagrees as they don\'t indicate this in their classification.

Well to the southeast of Arp 173 is the strange distorted galaxy MAPS-NGP O_502_0362090. This is the only designation given for it at NED. This surprised me as it is well imaged in the Sloan survey yet NED doesn\'t pick it up in that survey. Quite common I\'ve found, especially with blue galaxies of low surface brightness such as this one. There\'s no redshift data on it so I can\'t tell if it is related to Arp 173 or not. I\'m surprised Arp ignored it. It certainly is peculiar looking.

Just north of this galaxy is an object listed as an IR source in the 2MASS catalog and a galaxy and quasar in the Sloan Survey. I\'ve noted it as IR/G/Q in the annotated image. Its redshift puts it about 2.9 billion light-years away so it is pretty big and bright for a galaxy. I see no hint of a brilliant quasar at its heart, however.

West and a bit north of Arp 173 is a very blue disk galaxy also at about 410 million light-years. It too has very low surface brightness. It was picked up by the Sloan survey and is in other catalogs including LEDA as LEDA 4550853. It appears rather normal however so doubt it has interacted with Arp 173.

In the southwest corner is asteroid (33666) 1999 JO94 shining at an estimated magnitude 18.6. You\'ll note there are red green and blue frames on either side of the luminosity frame. Due to weather and meridian issues, I took the first red, green, blue series then the 4 luminance frames. I was sure clouds were going to cut off my imaging. By then I had to move to the other side of the meridian. I did so and took the remaining three color images while the clouds never came rolling in, whew.

In the upper right corner are several galaxies at about 680 to 690 million light-years. This group has more than a dozen members, most of which are off the image to the northwest. I found no recognized cluster in the area, however. 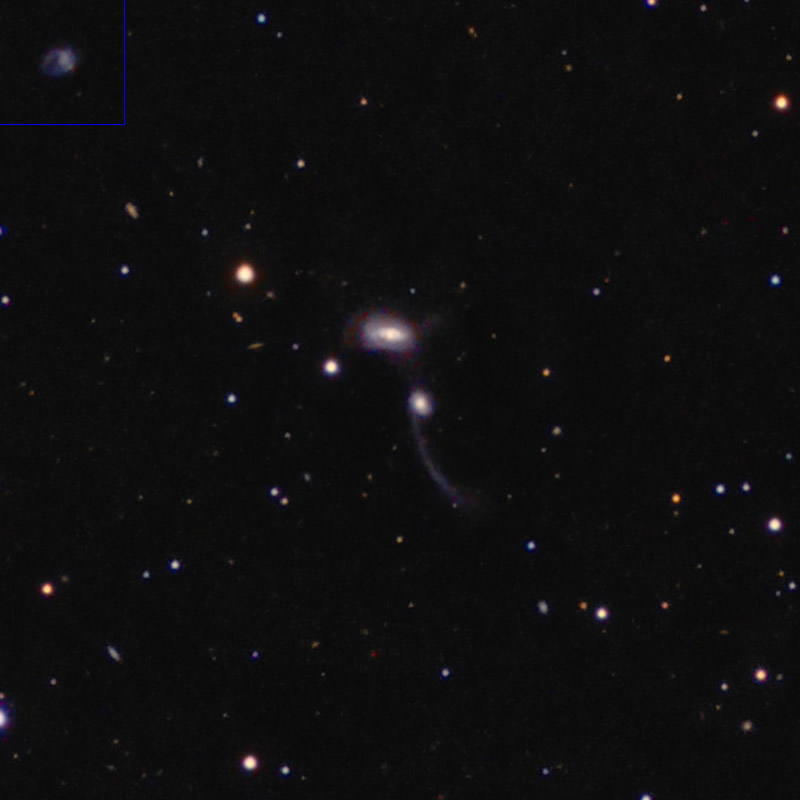 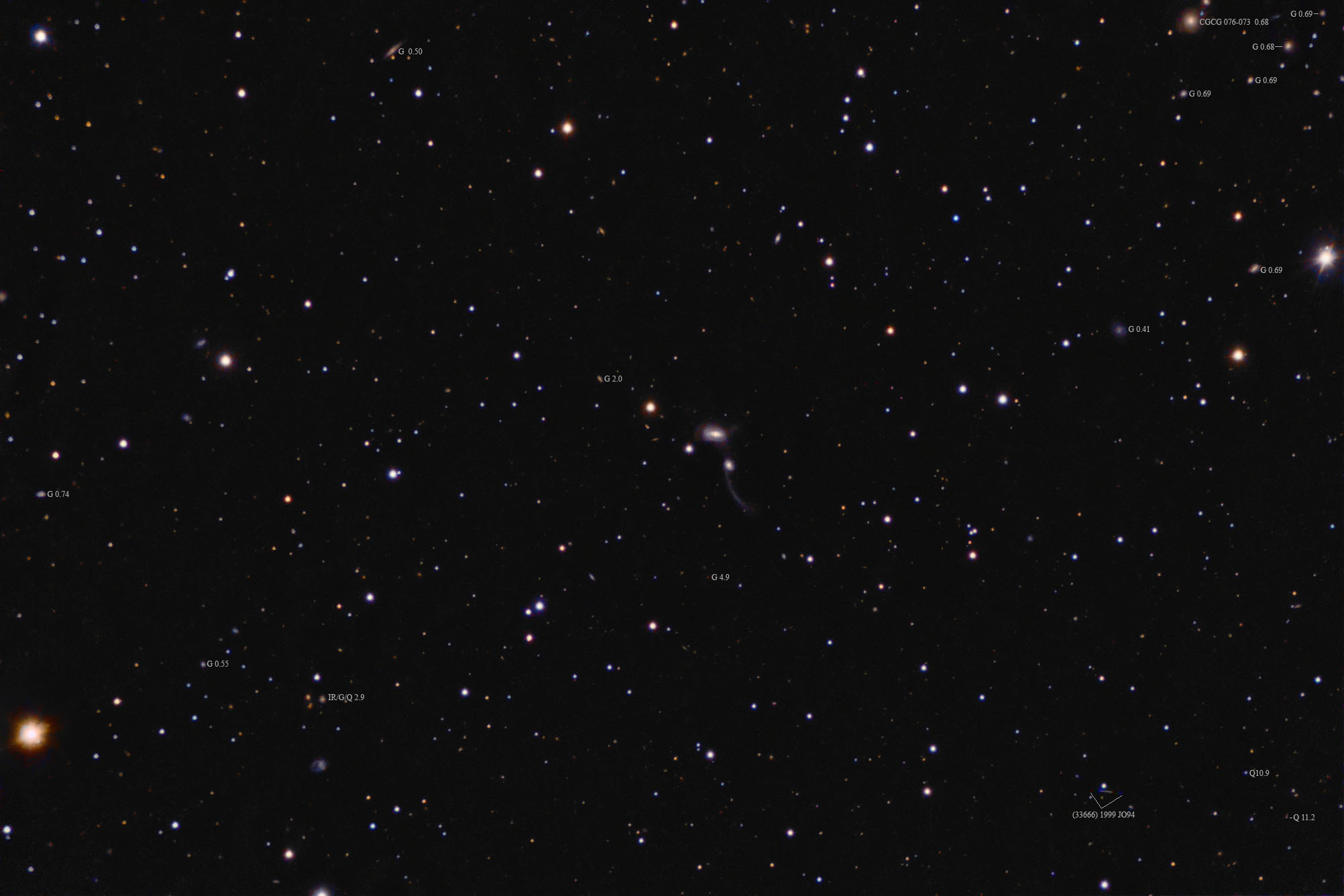 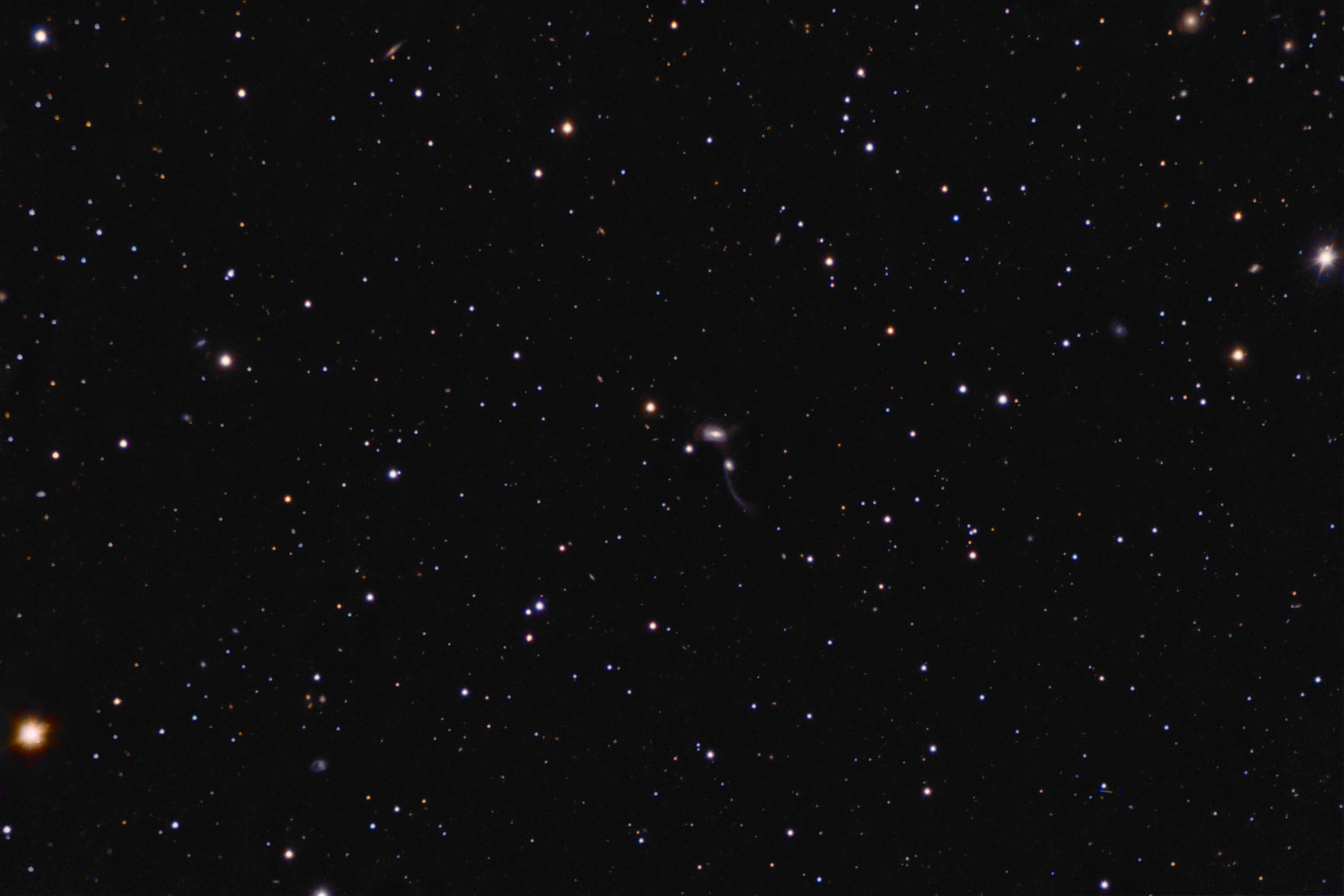