The Tower of babble bit me again. I reimaged Arp 175 without realizing it as I also had it under its IC numbers. This turned out to be a good thing, however. The original data was taken on a night of poor transparency while the new image was under better conditions. While they weren\'t framed the same at all I\'ve managed to include a bit over half of the first images data in the image stack so part of the image uses just the new data and part all the data. The result is I can bring out a lot more of the plume.

Arp 175 is considered to be three interacting galaxies also known as Zwicky\'s System. But that was before redshift measurements that now show that IC 2483 has a very small redshift compared to the other two putting it less than 10% the distance of the other two. Of course, the fringe makes a big deal about this assuming it is established they are all at the same actual distance. That, however, isn\'t all that likely at all.

See http://ned.ipac.caltech.edu/level5/March02/Zwicky/Zwicky3.html for a very old discussion on this. Note their enhancement of the POSS II blue plate seems to show a connection to IC 3483 that\'s almost as bright as the rest of the plume. Arp said the couldn\'t see the plume going beyond 2/3rds the way to IC 3483. My new image shows a rather abrupt end to the plume about where Arp put it. I don\'t see it continuing to IC 3483 at all.

What is certain is there\'s a connection between IC 3481 and IC 3481A. This is rather confined with no hint of it ballooning out. Yet beyond IC 3481A, we have that huge arcing plume. I\'m going to speculate here that this plume is not what everyone says. The area is full of very small dwarf galaxies with the same redshift as these two large galaxies. Could one of them have been torn asunder by the gravity of these two and we are seeing the remains of this third galaxy? To me, the plume doesn\'t fit with the stars obviously part of the IC 3481-81A system\'s plume. It seems to me to be entirely separate. I wasn\'t able to find any redshift determination for this plume. That might answer this puzzle.

I couldn\'t find any images deeper than mine on the net. But even if the plume does extend to IC 3483 that doesn\'t mean IC 3483 is involved. It likely is near in the foreground and its just coincidence we see it from this perspective. If it is all one vast plume it stretches some 350 million light-years. Now that\'s some plume!

Another puzzle in the image which I discussed the first posting is of VCC 1464 which appears many times at NED under various designations. Two have a redshift of z=1.1 which puts it over 8 billion light-years away. But NED says the redshift is likely in error. One entry calls it a quasar at 18th magnitude. Quasars are starlike points so an 18th magnitude one would shine brightly through the faint fuzz of this galaxy yet is not there. Seems like some major error is involved here that has yet to be straightened out. In any case, there\'s no way I could pick up a dwarf E4 galaxy at 8 billion light-years. That famous Chinese astronomer Sum Ting Wong has struck again I\'m afraid.

IC 3481 was discovered on May 10, 1904 by Royal Frost an American astronomer working from the Arequipa observatory in Peru. He\'s credited with finding 454 IC objects. He discovered IC 3483 at the same time. I don\'t know who found IC 3481A.

NGC 4528 was found by William Herschel on March 15, 1784. While it is considered a lenticular galaxy and certainly appears to be one in all images I found I was surprised that applying my usual stretch for bright cored galaxies a barred spiral appeared! While it has some characteristics of an S0 lenticular galaxy it also has a bar and ring seen in some barred spirals. It seems to be a hybrid of both types.

Oddly NGC 4503 is classed as such a hybrid being SB0-: Yet I was unable to pull a bar out of it. It does have a rather featureless bright disk around the core that is quite white, then a dark ring and the outer disk is rather red in color. The inner bright disk seems twisted about 15 degrees clockwise from the outer red disk. It was discovered March 15, 1784 by William Herschel and isn\'t in either Herschel 400 list.

IC 3470 is the remaining IC galaxy in the frame. Its a dwarf E0 galaxy with an obvious nucleus. No surprise here, it was also found on May 10, 1904 by Royal Forest.

I\'ve noted 4 asteroids on the image. All are from the April 2014 data. There were two in the original image but due to how I combined them I accidentally deleted them from the combine. I\'d meant to hide the new image in that area to allow them to be better seen and instead hid the asteroids. Somehow I didn\'t notice until I started writing this weeks later. 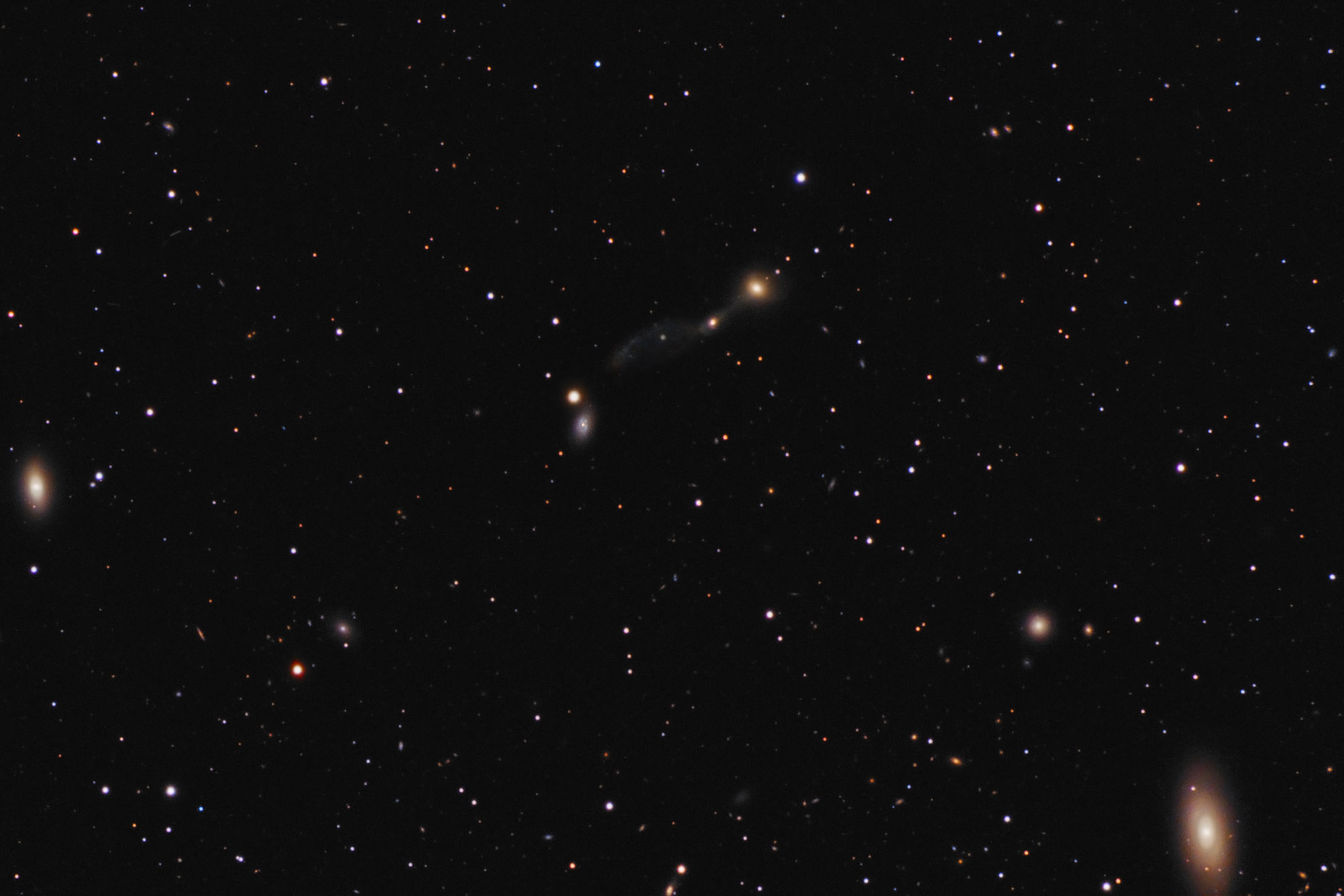 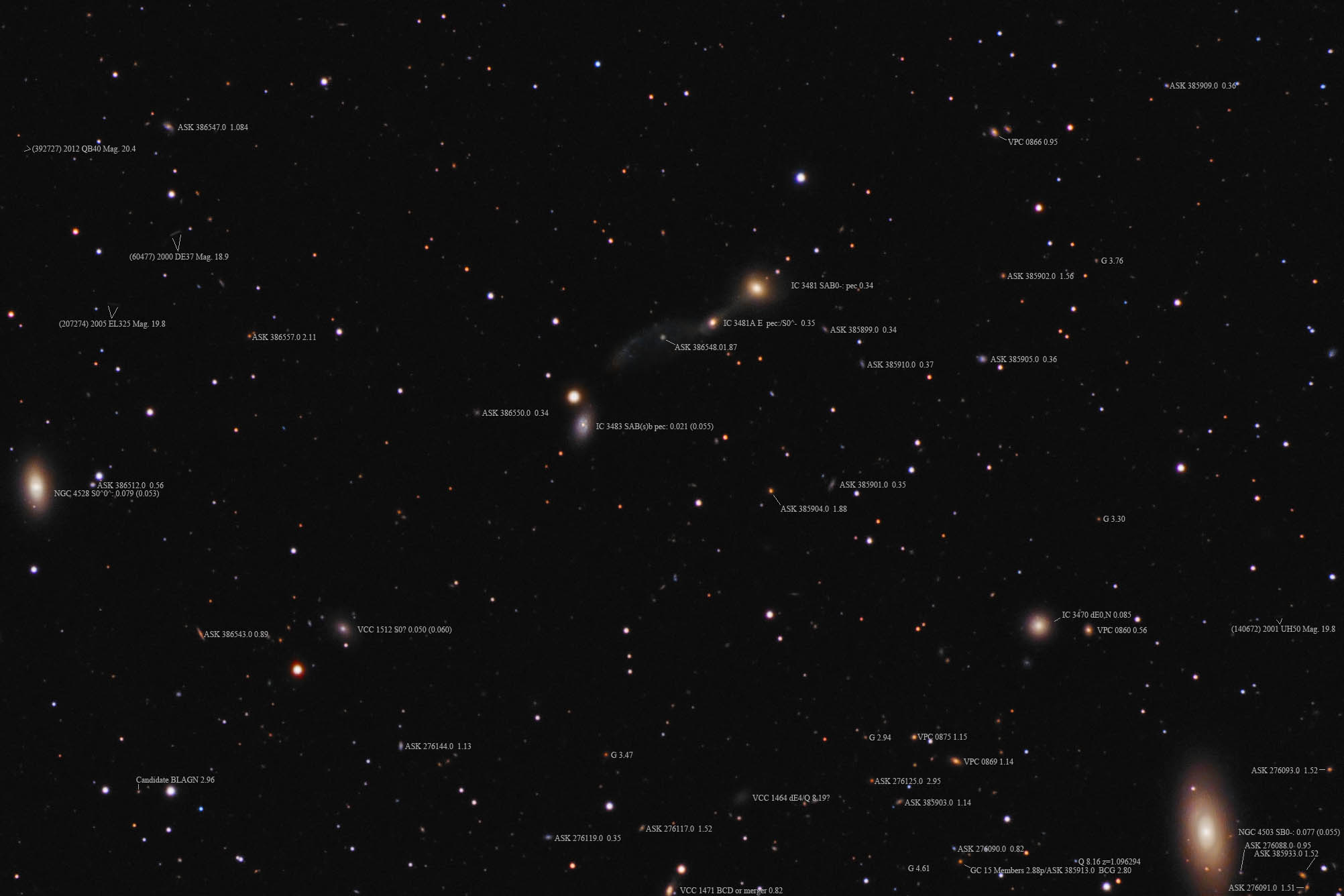