Arp 178 consists of three galaxies NGC 5613 (upper), NGC 5614 (lower) and NGC 5615 (inside NW halo of NGC 5614). These are located in the constellation of Bootes. NGC 5613 is nearly 400 million light-years distant while the other two are a bit less than 190 million light-years away. Arp put these in his category of galaxies with narrow counter tails. His comment reads: \"Ring off center, broad ejected plume from condensation in ring.\"

Most papers of the era of Arp\'s Atlas and prior consider NGC 5614 as interacting with the northern galaxy (5613). We now know that with 5613 having over twice the redshift this isn\'t the case. It is unrelated but worthy of its own entry in the atlas. It is classed as (R)SAB(r)0+ by NED and the NGC project agrees but leaves off the + sign. At first glance, it appears to have a faint outer ring. But look closely and you see it is really two very extended spiral arms that nearly overlap. One starts at the 11 o\'clock position and goes around to the 4 o\'clock position. The other starts at 5 o\'clock and goes around to the 10 o\'clock position. In both cases, the ends are further from the core than the other arm inside it. This may be easier to see in the Sloan image stretched a bit differently than my image. What caused this? There seems no likely source. Prior to its redshift being determined, it is easy to conclude that NGC 5614 caused it. Now it is a puzzle.

The main feature here is NGC 5614 a very large tightly wound spiral with an off-center core and huge plume. NED and the NGC Project classes it as SA(r)ab pec. The plume seems possibly related to NGC 5615. It certainly is due to a gravitational interaction in the recent past. The off-center core causes Arp\'s \"ring off center\" comment. At first, I thought it might be that this was a case of a merger with inner arms rotating counterclockwise and outer ones turning clockwise but I found a rotation curve that says all is rotating the same way. It is just the core being off center from the first ring that creates this illusion. Still, I am having a hard time seeing it. I believe it a merger in progress with NGC 5615.

The condensation Arp refers to is NGC 5615 and has a redshift that puts it about 3 million light years more distant than NGC 5614. NGC 5615 is not classified at NED, NGC project says S? I can\'t see enough to try classifying it so have to agree with NED. Is NGC 5614 in the process of digesting NGC 5615. I saw suggestions of this in early papers but nothing conclusive. One paper suggests that the tightly wound arms of NGC 5614 might be due to an unusually massive black hole at its core. No reason was given other than it appears such galaxies tend to have larger than expected black holes when this has been measured. Pretty speculative to me. In any case, it is an interesting galaxy as is NGC 5613.

After I wrote this Adam Block posted an image of this galaxy taken by the 32\" scope at the Mt. Lemmon Sky Center observatories. It clearly shows NGC 5615 is broken into several bright cores. It also shows the bright blue arcs in NGC 5614 far more clearly. I now think 5615 is quite likely the remains of a galaxy torn asunder by 5614, even the core of it is being ripped apart by tidal forces. I wrote Adam with this suggestion and he agreed it is likely the case. The three million light-year difference in redshift is likely due to relative motion and difficulty of assigning a redshift based distance to a mess like this.

Another galaxy at about the same distance of NGC 5514-5 is to their NE. Several galaxies of the same distance as NGC 5513 are in the frame as well. It appears they are two different groups. Several galaxies at 1 billion light-years are also found around the image. While I see several groups of galaxies in the image only one, the northwest corner is listed as a galaxy group. That is MaxBCG J215.67259+34.98489, is cataloged. It is shown to be a group of 20 galaxies in an unknown area. It is listed with the same position as its apparent anchoring galaxy though their redshift distances are slightly different. See the annotated image for these.

Normally I think of NGC galaxies as being closer than say a half billion light-years, far closer in many cases. But NGC 5609 at 1.31 billion light-years is an exception. NED lists its green magnitude as 16.3 while the NGC Project puts its visual magnitude at 15.7. Since green is usually used for this I can\'t explain the difference. Still, this one should be visible in larger amateur telescopes from a dark site, say a 16\" or larger. Young eyes may glimpse it with less aperture if the brighter magnitude is correct.

Often, in my annotated images, two similar galaxies are side by side. Only one though has a redshift published. I often get asked, \"Isn\'t it reasonable to assume the other is at the same distance?\" No, it isn\'t. A good example is in the lower corner of my image where two rather similar galaxies do have redshift data and one is over 3 times further away than the other yet appears only very slightly smaller. Assumptions are very dangerous in this business.

Yet again I happened to check a galaxy in my image that NED doesn\'t seem to know about. It lists over 5000 galaxies in this field, many too faint for me to pick up, but see Adam\'s image which does see them and more, on this rather poor night. Yet it missed the one in the northwestern corner of my image marked with a question mark. The star to its left and a bit north is listed but not the galaxy. Sure wish I knew why this happens. There are likely others. I don\'t check very many for this trait yet find one in a rather high percentage of my images. Note that most of the faint \"stars\" in the image are actually galaxies that are listed in NED but without redshift. Which is good as otherwise the image would have so many labels as to be useless.

Adam Block\'s image with the 32\" telescope at the Mt. Lemmon Sky Center
http://www.caelumobservatory.com/gallery/n5613.shtml 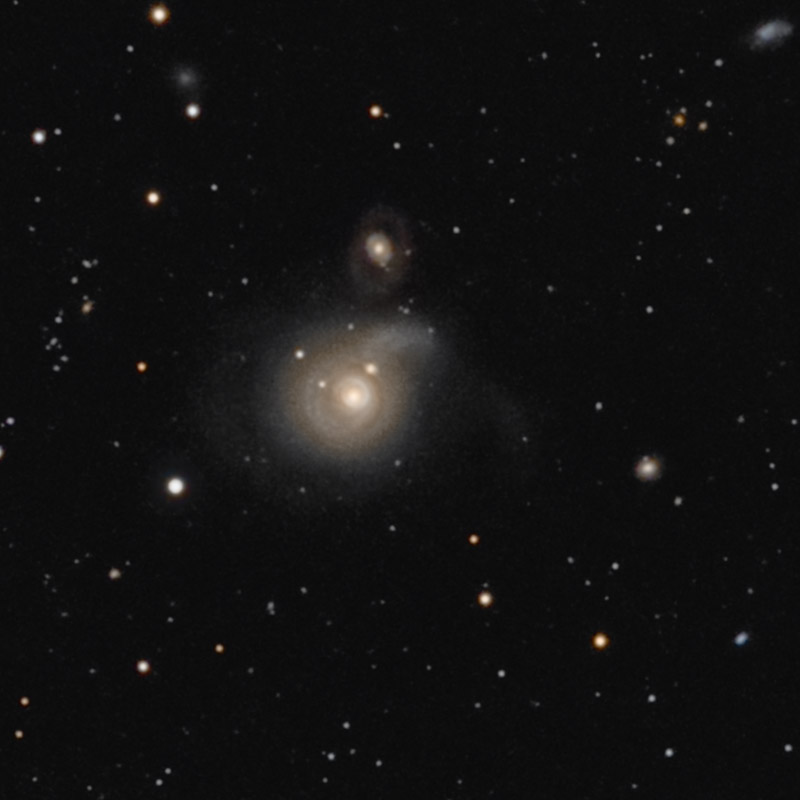 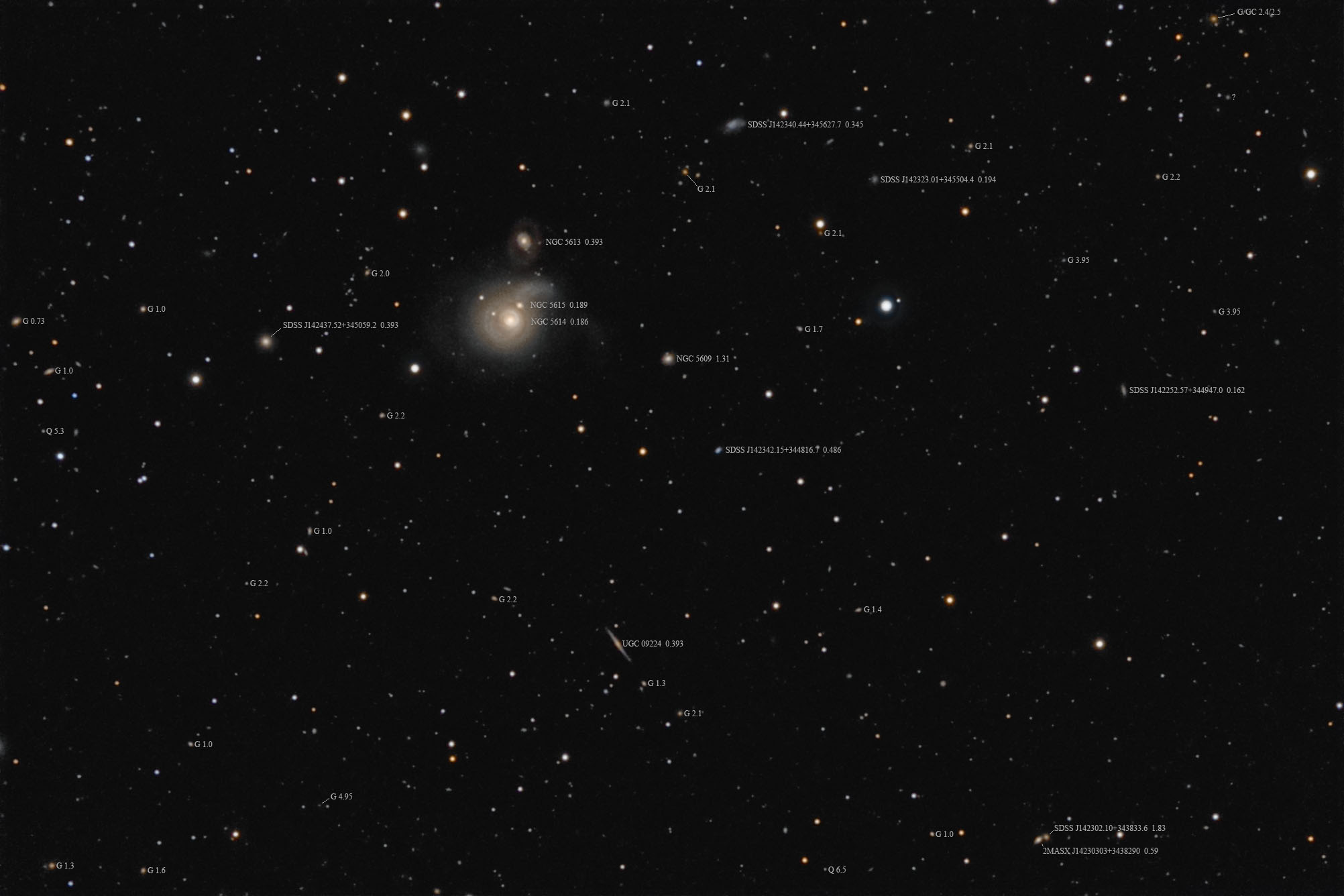 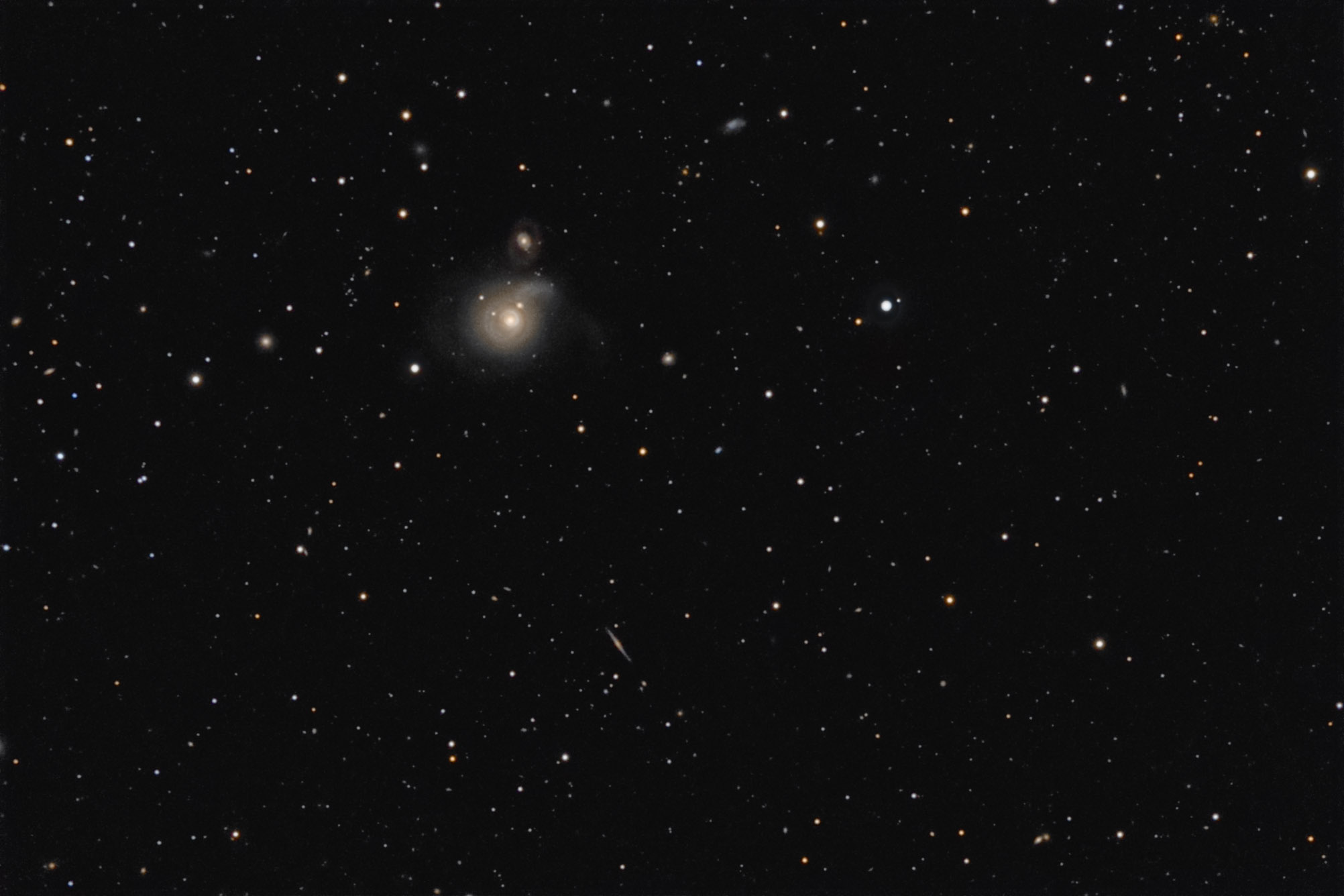