Arp 179 is the object in the center of my image. Of that I\'m certain. But what other catalog names it has is totally scrambled. Each source claims the others are wrong and they don\'t begin to agree. More on that in a bit. First I\'ll go with what we do know.

Arp classified this one under Galaxies (not classifiable as S or E): Narrow filaments. The class preceding it is narrow counter-tails. I\'m not sure of the distinction. Arp\'s comment on it is \"Condensed offset center.\" Looks more like a galaxy with a tidal plume to me but we know a lot more about such features than was known when Arp put this atlas together. The galaxy is located in the northwestern corner of the constellation Eridanus not far from M77 (Arp 37).

So I\'m going to say Kanipe and Webb may have this one wrong due to NED saying LEDA 175747/NPM1G -04.0134 is the same as Arp 179 but using the wrong galaxy for Arp 179. So I\'ll use the data for PGC 11432/NPM1G -04.0135 for Arp 179. NED has no classification for it but does show a redshift distance of 193 million light years. It is also listed as 2MASX J03020046-0441257 so is an IR strong galaxy. A good indication of a past interaction that is creating a lot of hidden star creation probably in or near its core. The other galaxy, the pseudo-Arp 179, I\'ll call it, LEDA 175474, is also listed by NED to be an IR source. But no distance data is available. Could they be related? No way to know, unfortunately. It isn\'t distorted so I doubt it created the plume. It appears to be to likely be far more distant but without more data that is only a very poorly supported guess.

Arp 179 is the only galaxy in my image with redshift data. What created the plume? I could find no obvious candidates within 3 degrees. Only 2 galaxies at about the right distance were turned up in NED within a 3 degree radius. MRK 1065 44 minutes away and KUG 0306-026 at 167 minutes. MRK 1065 is a SB0 galaxy noted as peculiar. I really didn\'t see much to indicate an interaction in the DSS plates, however. I suppose the plume could be the result of a merger. I found nothing to support this guess nor negate it either.

Arp\'s purpose in putting together his atlas was to help show the need to understand what is going on in peculiar galaxies. This has happened in general. We have a much better, though still somewhat incomplete, understanding of how galaxies get their peculiar features. But not all of his galaxies have been studied in any detail. This is one of the ignored ones it would seem. 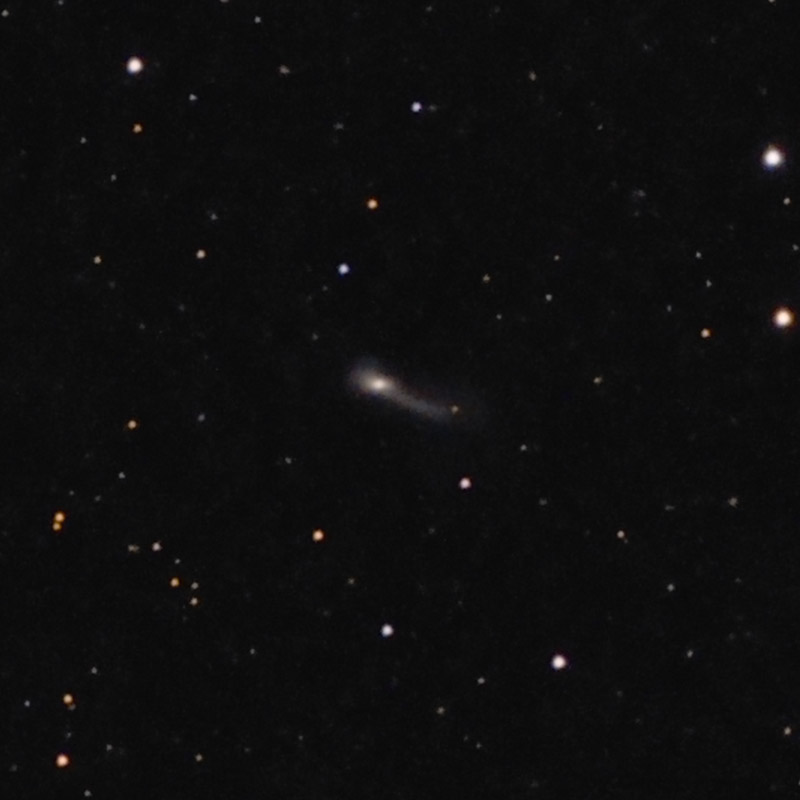 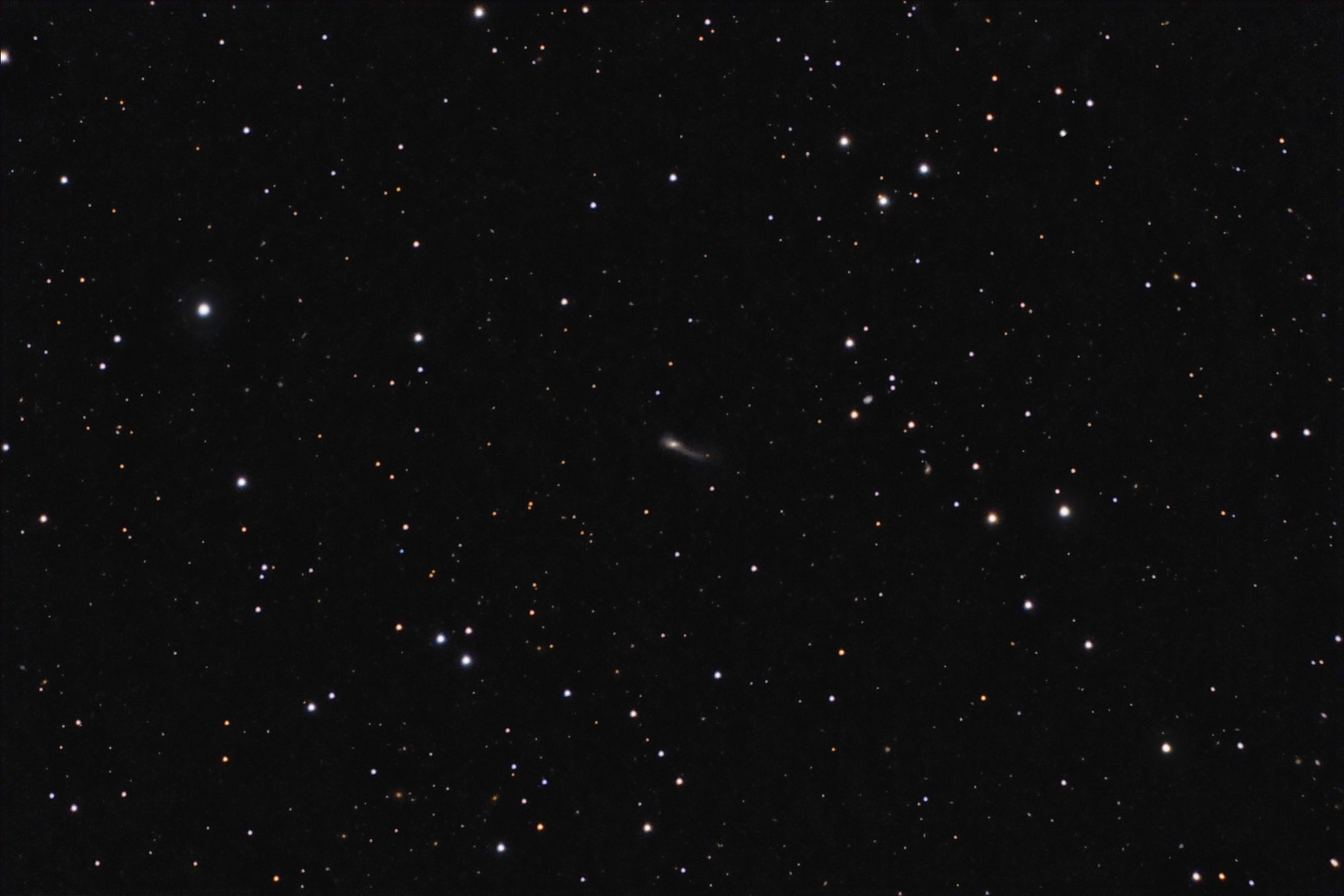 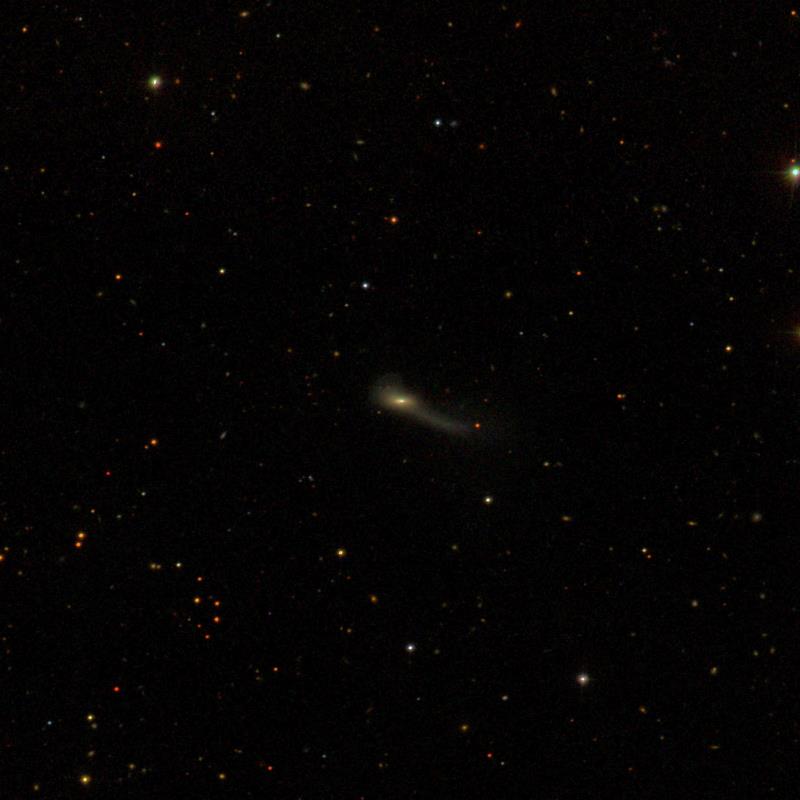