The spike of Arp 192 turned out to be a false alarm and was only an asteroid. But Arp 182 has an even longer and almost as narrow spike that too is virtually straight and darned hard to explain. It also looks artificial and unreal but this one does really exist.

Arp 182 is also part of a group known as Hickson 96. It is a tight group of 4 galaxies about 375 million light-years away. The main one is NGC 7674, Hickson 96A, classed as SA(r)bcP. It is interacting with NGC 7674A or Hickson 96C. The result is a rather normal small plume to the north with a detached (in my image that is) plume further north. The really strange one is the narrow, well-defined one heading in a nearly straight line to the east-northeast. Since it barely shows on Arp\'s image I didn\'t see it before my image started to come in. After the first frame, I was sure I had a reflection. I moved it on the sensor but the \"reflection\" moved like a real object so I went back to my original position and finished the shoot figuring I\'d just deal with it in processing. It looked too real when I got around to processing it over 6 months later. A bit of research was called for, looking at Arp\'s notes, in this case, turned up the fact he had noticed it. His comment: \"Long straight, very faint filament like bow wave from companion.\" Also, I should have noticed his classification under Galaxies: Narrow filaments. I just thought he meant the stuff on the north side. Hubble has taken a great image of this galaxy. It is oriented with east down rather than to the left as my image is. Oddly the filament is dimmer on that image than mine yet his shows the filament I see as detached as connected to the galaxy. I don\'t know why the difference other than it may be due to my far lower resolution. In fact, it appears the \"detached\" filament is really an extension of the outer arm much like in the Whirlpool Galaxy, M51, Arp 85. It\'s the short one tucked in between it and the galaxy that may be harder to explain. Is it part of the other arm? How the long straight eastward filament fits in I just don\'t know. It does appear to curve into the companion which has a tidal plume at the other end. Problem is the plume is somewhat blue and the other plume is rather red. While the companion has some gas and dust was it enough to trigger such massive star formation in the plume? Apparently, it was.
Hubble\'s image: http://www.spacetelescope.org/images/heic0810bp/

The third member of the group shows in the Hubble image with some detail. In mine, it is just a small blue oval to the left of NGC 7674. It is Hickson 96D or PGC 71507. The 4th member doesn\'t fit in the Hubble image frame. It is further east, left, and is NGC 7475, Hickson 96B. Most sources say it is an SAB(s)0 galaxy. NED agrees one place and another says it is E2. It sure has the color of an elliptical galaxy. S0 galaxies usually are white to slightly orange in color. NGC 7674 and 7675 were discovered by John Herschel on August 16, 1830.

The edge on spiral at the right edge in the center is PGC 071461/2MFGC 17605. It is only 260 million light years away so probably not related. The galaxy at the very bottom center edge is 2MASX J23275583+0835513. I have little on it. It appears to be another ring galaxy, round this time. Unfortunately, this field is out of the SDSS survey area so most galaxies are uncatalogued. There\'s an interesting pair of small very blue apparently interacting galaxies NW of Arp 182. Unfortunately, like most in this image they are uncatalogued (Edit: They now are listed as Ultraviolet sources but no distance, see annotated image). A similar pair is to the right of the oval ring galaxy 2MASX J23273713+0841028 halfway to the edge (Edit: They too are now listed as Ultraviolet sources but without any distance). There\'s also an X-ray galaxy with a very active AGN in the image, HELLAS 209. I\'ve included other galaxies without distance data in the annotated image.

The image contains three asteroids. The brightest to the southeast of the center is (60171) 1999 UP47 at an estimated magnitude of 18.2. Much fainter to the southwest of center not far from the bottom halfway from the center to the right edge is 2005 TF1 at magnitude 19.3. The lack of a number indicates it hasn\'t yet been observed long enough to make one trip around the sun. (EDIT: It has now received its number and is (272397) 2005 TF1) The third is a bit brighter and is east and a tad north of NGC 7675. This is now my 3rd unknown asteroid. I really do need to check these for unknown asteroids ASAP rather than 6 to 9 months later. It will stay undiscovered for a while longer it appears. Edit: It has now been discovered and is now known as (454899) 2015 TR99. It was previously known as 2004 TN248. Why I didn\'t pick it up in 2009 when this was written I don\'t know. Could be it was lost for a while. Oddly it is in the Minor Planet Center database twice. Once with the number and once without. The entry without an number is shown at a position well northeast of the correct position which is shown by the entry with the number. Both show it with a magnitude that is about a full magnitude too dim. I\'m used to these estimates being a bit off but never this far wrong. The position, speed and direction of its motion all agree to the prediction so I\'m sure this is the right asteroid. 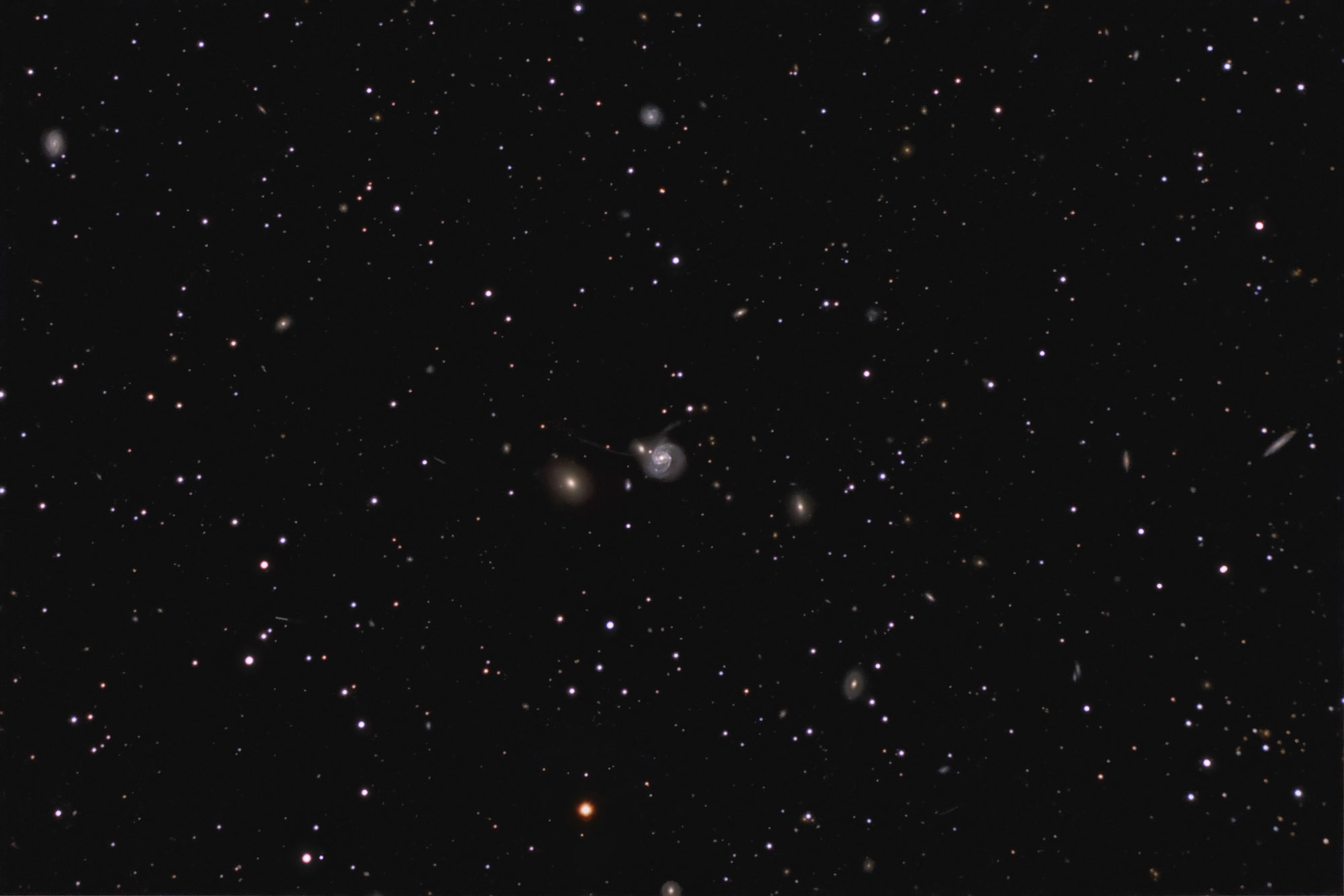 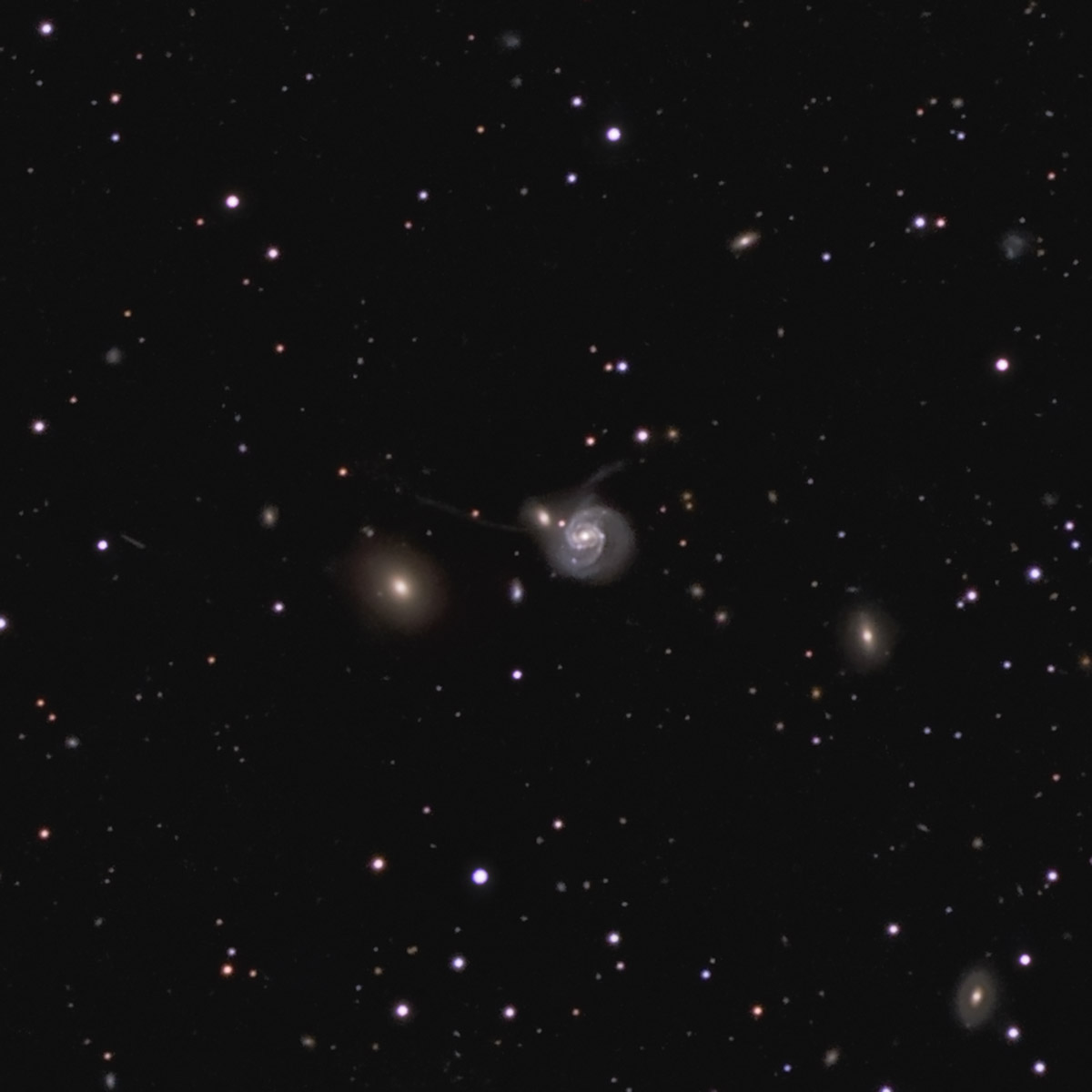 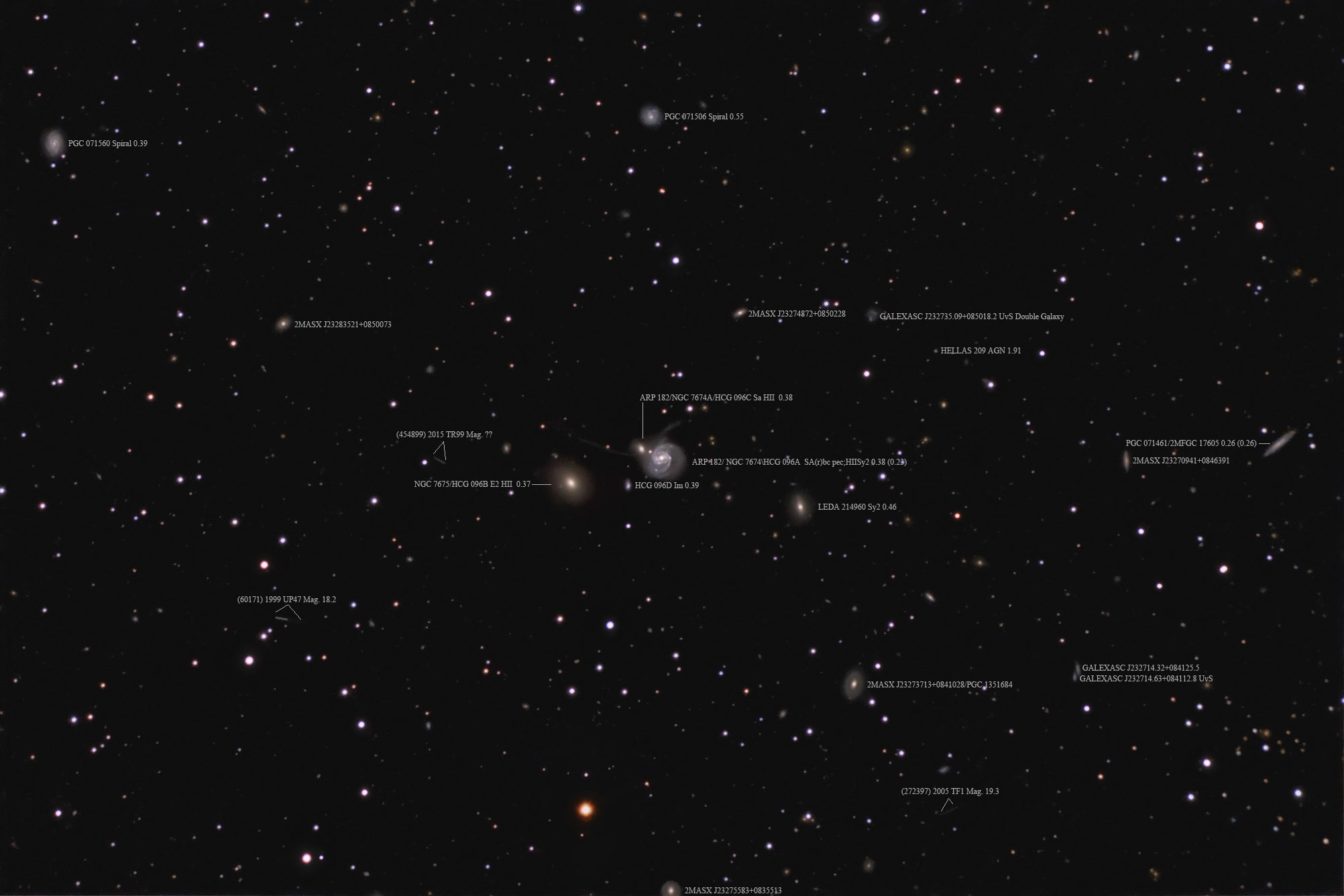