This is a reprocessed Arp 184/NGC 1961. Problem is it is at nearly 70 degrees so spends nearly all its time in my Polaris Tree. When I took this data over 2 years ago I had to do so over many nights. Even then trees (pine needles anyway) crept into the image making a mess of the stars and the background. Flats don\'t compensate for pine needle obstructions! My ability to handle this was limited back then. So I decided to reprocess the image using my improved skills and larger tool set. While I now could deal with the stars and background better there\'s a loss of resolution due to diffraction effects of all the needles I couldn\'t eliminate. The trees have continued to grow so doubt I can even do this well again unless I do some trimming. Since they are 100 feet tall that is a bit beyond my ladder\'s reach and I\'m too old to try climbing them. Even a cherry picker can\'t reach the branches I need to reach. This will have to do.

This time I was able to bring out the many HII regions in this galaxy. Considering it is about 180 million light-years distant these must be huge compared to those we normally see in galaxies. In angular size, they are about the same as those in M101 at only 25 million light years. The distortion to this galaxy is very hard to explain. While it is a member of a small group of galaxies at the same distance (the three largest other galaxies in the image are members of this group) none show any hint of distortion so didn\'t cause the distortion. The other often cited reason would be a merger but the papers I found say this isn\'t likely. Maybe not but either this guy is intrinsically distorted or the product of a long-ago merger. I prefer the second choice. NGC 1961 was discovered by William Herschel on December 3, 1788.

Out of the Sloan survey field, NED has distance data on only the three other members of its group in the image and one quasar at 7 million light years very near the galaxy. It\'s faint and I won\'t try to point it out. Those interested can look it up at NED or download the DSS image of it. It is IXO 29. Which stands for \"Intermediate-Luminosity X-Ray Object.\"

Edit: I\'ve now made an annotated image that shows what few have distance data at NED. Also since this was taken I had to remove the pine trees as they were in danger of falling on the house or observatory but so far I\'ve not retaken this object. 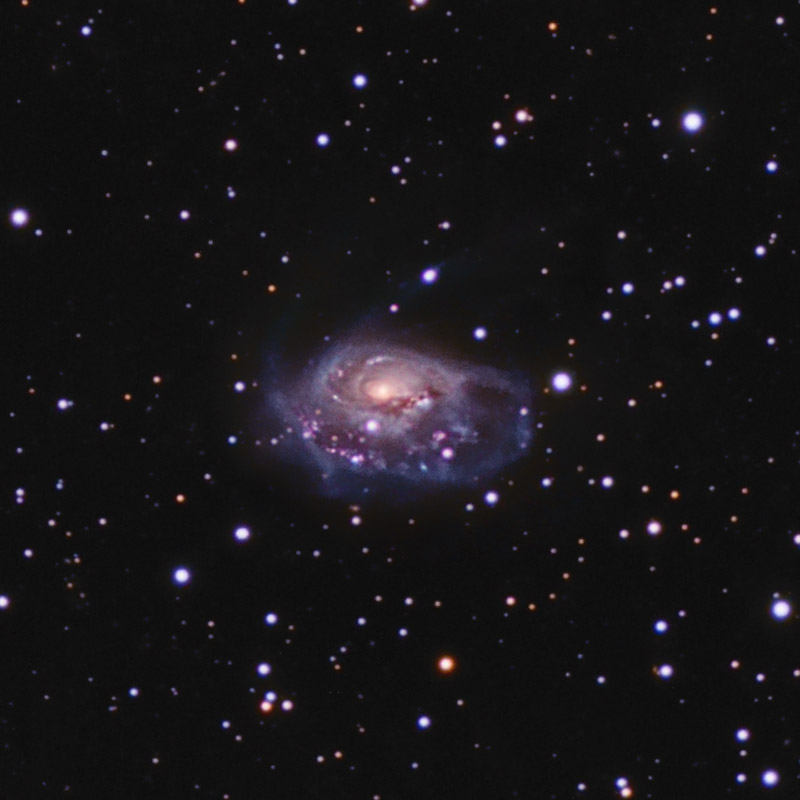 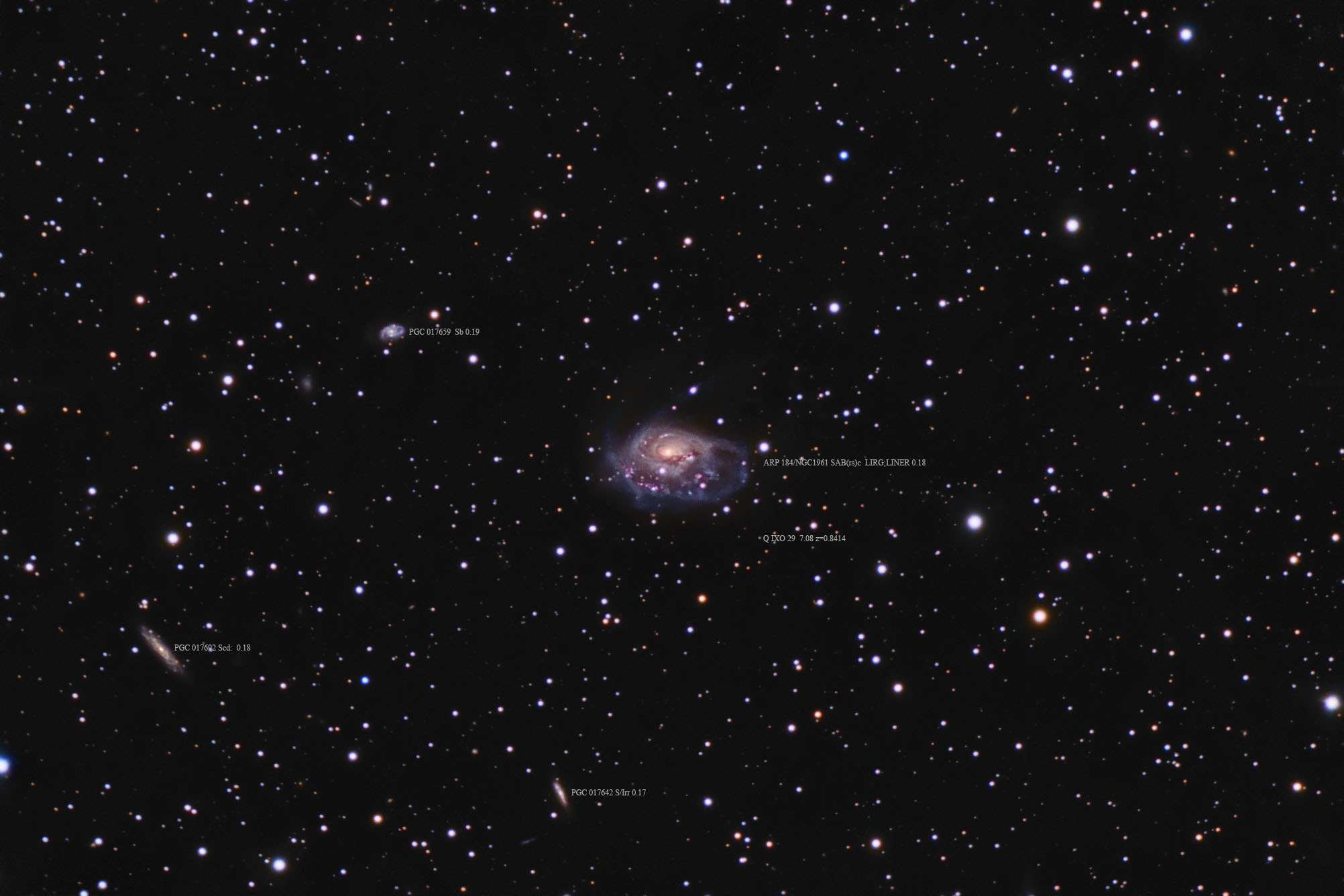 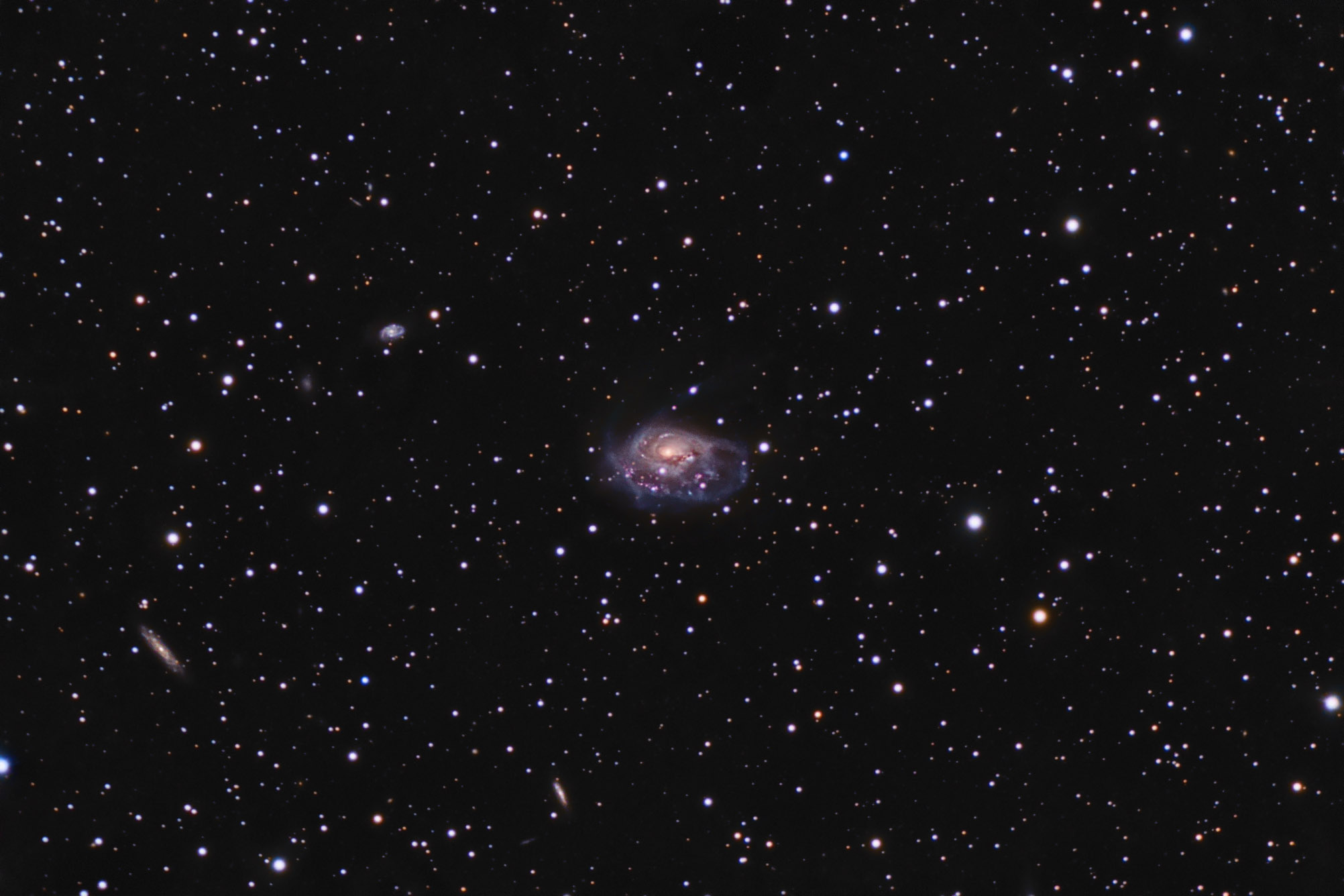