Arp 185/NGC 6217 is in Arp\'s class for galaxies with narrow filaments. Though I don\'t see any in this case. Arp\'s comment doesn\'t help much. It read: \"Condensed nucleus, faint outer arms less curved than inner arms.\" Kanipe and Webb seem to indicate he may be referring to the brighter segments of these faint outer arms. They are about the only part of the outer arms visible in Arp\'s image.

Arp 185/NGC 6217 is located in Ursa Minor just above the bowl of the little dipper and is about 60 million light-years away. Redshift says 61 which may be rather accurate in this case, at least the HST folks give this figure. This was the first image taken with the ACS camera after the last repair mission got it back in working order. The image is at: http://apod.nasa.gov/apod/ap091228.html . The field doesn\'t include the faint outer arms, however.

It is classed by NED as (R)SB(rs)bc; HII Sy2. The R and (rs) would indicate a ring structure. The SBbc means a barred spiral with arms intermediate between those of b and c structure (a is tightly wound while d is wide open arms. HII means lots of HII emission which is obvious in the Hubble image. Only the large region at the south end of the bar shows as pink in my image though other show as blue due to the HII being overpowered by the new super hot blue stars created by these regions. It also has an active nucleus of the Sy2 class. This is because it is considered a starburst galaxy by many of the papers I looked at.

It has a rather broken bar with arm segments coming off not just at the ends. One arm seems to come right off the core on the east side. Several arm segments come off the west side, one at the core and two below the core. North of the core it\'s pretty much a jumbled mess on the west side. I saw nothing in the papers about any ideas how it got this odd structure. Could a merger be involved? I have no idea. Seems possible. I\'d expect that to show in a detailed velocity analysis of the galaxy. Apparently, that\'s not been done as best I could tell. Did anything come of the HST image? Again I drew a blank. The Hubble site only talks about how it shows the ACS camera is again operational.

NGC 6217 was discovered by William Herschel on December 12, 1797. It is in the original Herschel 400 observing program. My notes made on May 18, 1985 with my 10\" f/5 at up to 120x on a good night reads: \"Oval galaxy with a starlike nucleus. No detail is seen in the halo. Arms can be made out but aren\'t what I\'d call distinct.\" I\'ve pushed the contrast of the arms in my image. See the included SDSS image for a more natural presentation.

Near the left edge of the image is the strange spiral galaxy UGC 10509. Its arm structure is very weird. Is this really two interacting galaxies on top of one another? I don\'t really see a core of a second galaxy. Did it interact with either or both of the nearby galaxies to the north? Only one has redshift data. That indicates it is likely at least part of the same local group. Neither companion seems distorted, however. Being much smaller I\'d expect they\'d suffer far more in an interaction. For now, I\'ll say they likely aren\'t interacting but something certainly has it would seem. Unfortunately, Hubble didn\'t test the ACS camera on it.

Only a very few other galaxies are even cataloged in this field. Coverage up by the pole seems rather poor for galaxies. What I did find were several X-ray sources. All are very bright in visual light. Some are very blue which isn\'t surprising for an X-ray object. The ones with the RIXOS prefix were found by the ROSAT X-ray satellite\'s survey. All of those are considered by NED to be X-ray galaxies with active galactic nuclei. But not as quasars though they are so bright and so distant I find that surprising. I\'d think only a quasar would be that bright at their distance. One is from the RX catalog. Also the result of the ROSAT X-Ray satellite but apparently not from the survey? I am only guessing as to the difference. These, NED says, were obtained not from a published catalog but from \"the literature\". The one with that designation in my image is listed by another X-ray catalog (Pietsch+Arp) as being a quasar. It is more distant than all but one and by far the brightest in apparent magnitude.

Most galaxies in the image weren\'t cataloged any place I looked. Even the rather bright blue fuzz ball southeast of Arp 185. I marked it with a question mark. I really am interested in what the heck it is. Most galaxies of its shape are ellipticals that are very red. It probably is an S0 galaxy seen end on. Usually, they have a higher surface brightness than this one does. It\'s likely a rare breed, whatever it is. 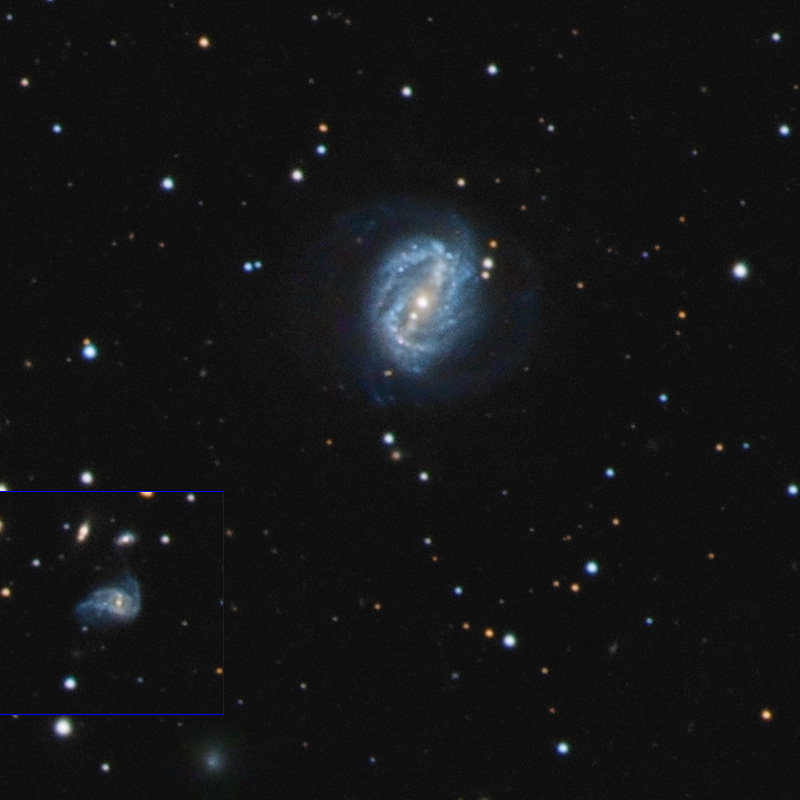 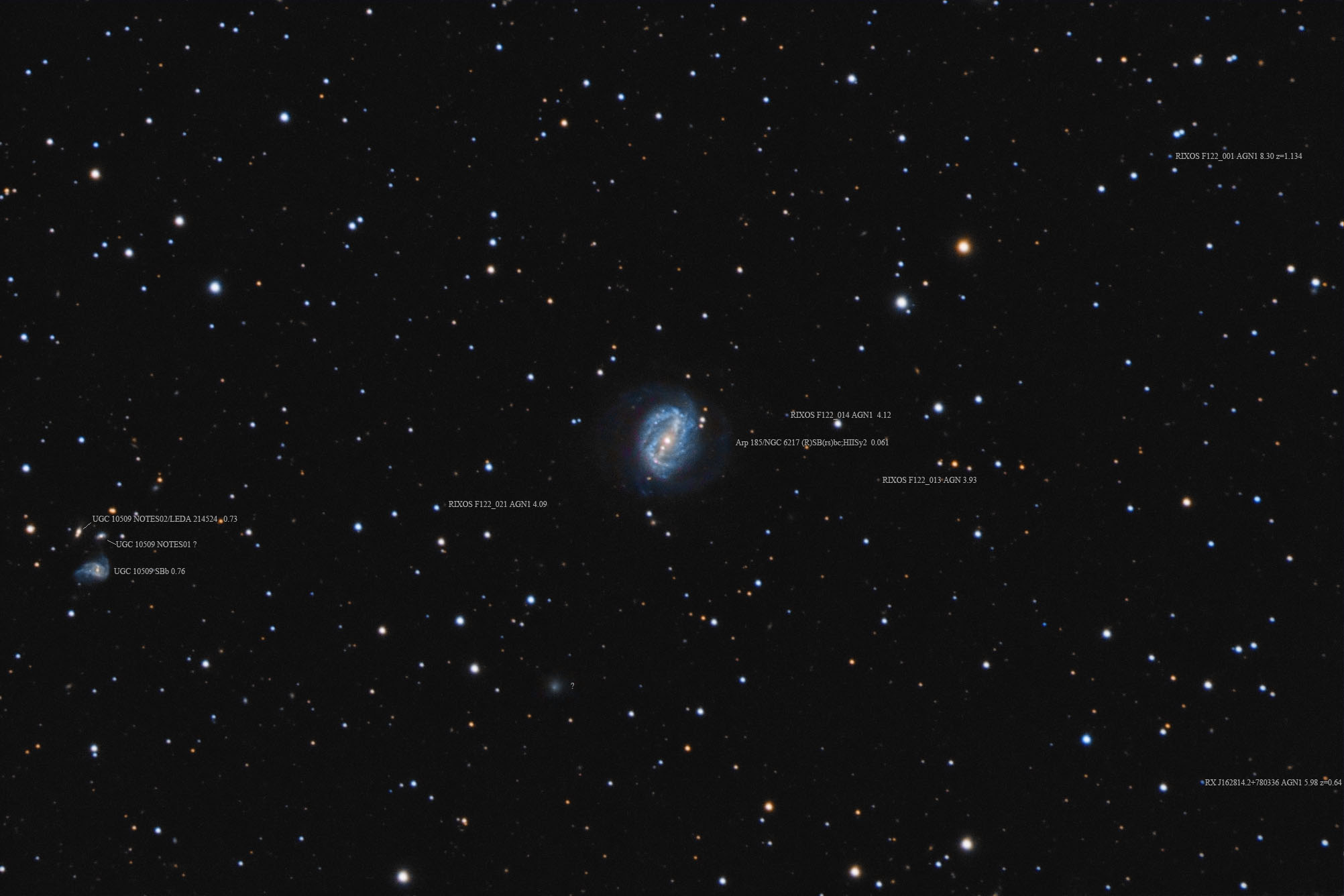 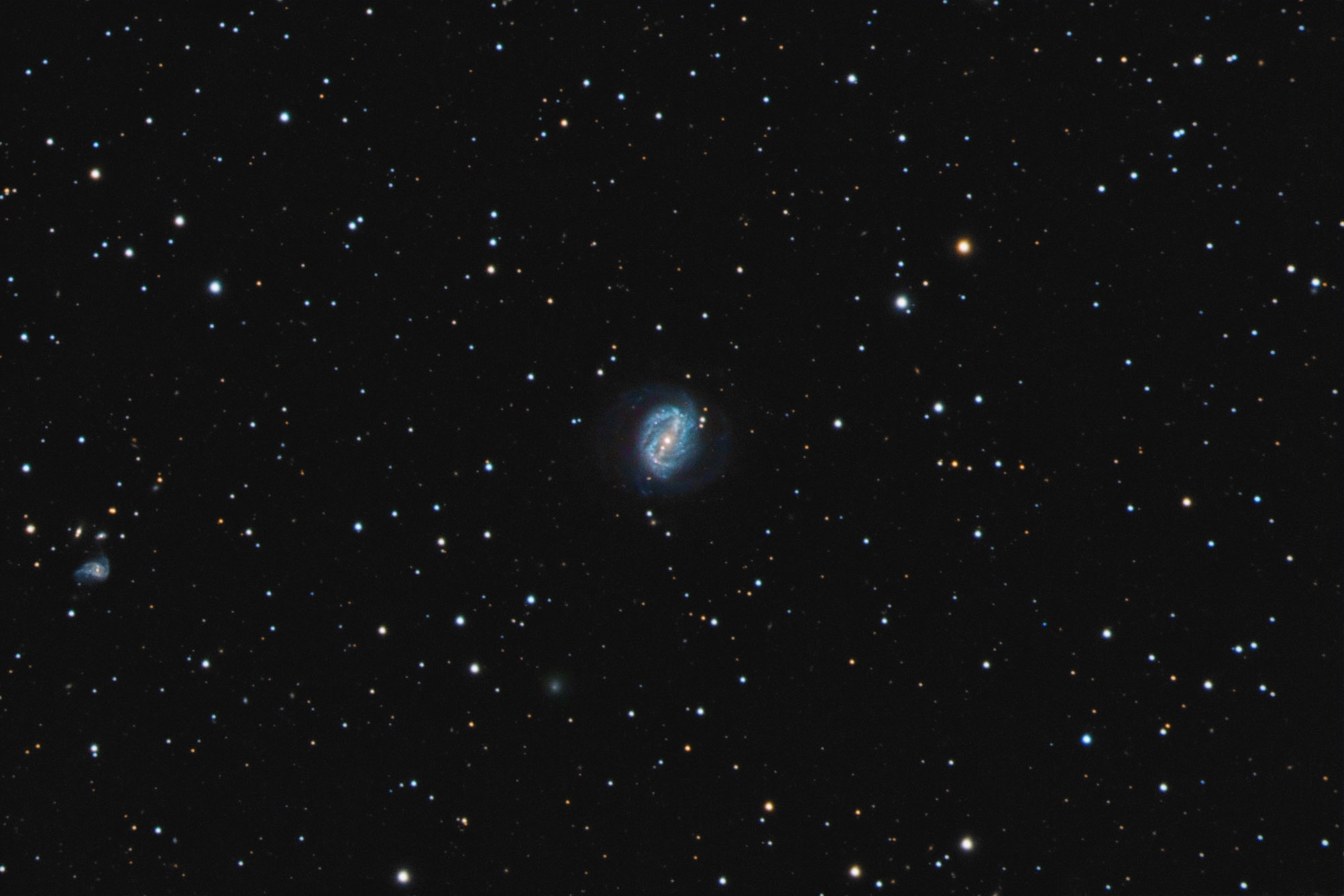