Arp classifies this one under \"Galaxies (not classifiable as E or S): Narrow filaments\". Odd as the two galaxies involved seem to be obvious spirals. But it appears Arp thought there were three, one stellar but he never got spectral data on it to know for sure. More on this below. It is also cataloged as UGC 2320. UGC 2320 also includes the galaxy below those with the filament.

Of the upper galaxies, the northern blue spiral galaxy has no redshift data but is presumed to be interacting with the southern red spiral galaxy. Remember that red spiral is a new classification of galaxies not recognized before being uncovered by the folks at Galaxy Zoo, many of which aren\'t even amateur astronomers, just folks with computers who like classifying SDSS images. The red spiral has a redshift showing a distance of about 460 million light years. So what about that odd \"comet\" a bit west of the red spiral? Arp says \"filament seems to originate from stellar image; no spectra available\". That would mean a third galaxy, one that is star-like with a huge plume. Or is it just a star? I can\'t find any data on it at all, even today. Most list this as a galaxy pair but some say multiple system as if to say maybe there are 3 but this may refer to the southern galaxy that some consider part of UGC 2320. Considering the \"stellar object\" is rather white and the plume a slightly reddish color, more like the red spiral I have to think it a tidal plume from that galaxy and the \"stellar object\" is just that, a star in our galaxy. If anyone out there has anything on this mystery please let me know. In measuring the FWHM of this star/galaxy I get a reading a bit larger than an average star but smaller than other known stellar galaxies. I have to believe this is a star and the point spread function of the object is due to the haze of the plume distorting the reading. If I assume the plume carries over the object and subtract that out its reading is that of a star. Still, a spectrum would be welcome! These galaxies are located in southern Aries.

That leaves the red elliptical like galaxy below the pair. Is it part of Arp 190? Arp did include it in his image and framed it as if it was. It too is part of UGC 2320 though other catalogs give it its own designation. It does seem related as its redshift distance is also about 460 million light years. If you look closely there seems to be a very faint bridge between it and the spirals to the north. But it isn\'t classed by NED as an elliptical galaxy which surprised me. Sure looks like one in my image. It is actually classed as a \"compact object\", whatever that means. The ARK catalog, where it is entry 92 says \"Compact nearly symmetrical red object.\" The CGCG catalog where it is is entry CGCG 440-018 also mentions how compact it is. It also looks compact in Arp\'s photo. Problem is it looks like a rather typical E2 or E3 galaxy to me though the core region seems to get brighter faster than many do. It was the home to the super nova 2003iv back in 2003.

While there are a lot of interesting looking galaxies, including a group of 4 below Arp 190 near the bottom of my image, few are in any catalog at NED, Aladin or SIMBAD. In fact, of the 4 only the easternmost has a magnitude estimate. It is 2MASX J02500130+1243553. The next one to the west and also the southernmost of the 4 is 2MASX J02495966+1243253 but there\'s little other data available. The rather bluer galaxy somewhat north of the other three is 2MASX J02495556+1244454, again, not much else is worth mentioning about it that I could find. So what about the one I left out. Seems I can\'t even find a catalog designation for it at NED or SIMBAD though The Sky gives it the extended PGC number 1415084 and a magnitude of 16.5. In fact, The Sky 6 has quite a few extended PGC galaxies not listed in the two databases I mentioned. Super LEDA does have them but little information other than position and sometimes magnitude. The Mitchell Anonymous Catalog (MAC) also lists some of the brighter galaxies in the image but again this is just a listing with no helpful data to understand relationships or distances.

SDSS hasn\'t covered this part of the sky, unfortunately. So while that fourth galaxy is the brightest and reddest and likely a member of the group it isn\'t in the 2 micron survey. Red doesn\'t mean it will be strong in the infrared. That often indicates massive star formation is going on that is hidden behind dust clouds. The IR comes from this dust heated by the stars it is hiding. That doesn\'t appear to be happening in this galaxy. An active galactic nucleus (AGN) can hide behind a huge dust cloud and also trigger the 2 micron survey to include the galaxy.

So while there appears to be a lot going on in this image I can\'t find much useful to relate about all these anonymous galaxies. We are likely anonymous to the residents of these galaxies as well.

All this reminds me of a T-shirt sold here. It shows a big mosquito with blood dripping from his mouth. It is saying \"So many fishermen, so little time.\" Substitute galaxies for fishermen and astronomy grad students for mosquitoes and it would be even more true: \"So many galaxies, so little time.\"

I should explain the rather elongated stars. This was taken on a clear night with 40 mph winds gusting to 60 mph; 65 kph to 100 kph. Two trees fell on our road that night. But the wind direction was such it wasn\'t stressing the rolled off roof, even though that is about 18 feet in the air but the wind was swirling like crazy in the observatory. I hoped that the wind wouldn\'t hurt the image but as it got strong the seeing got worse. It started about 3\" and ended at about 5\" Bright stars show some elongation due to the wind. I really shouldn\'t have even tried imaging that night as the observatory ended up full of debris from my Polaris tree but nothing heavy hit the optics though bark scars indicated two large branches did hit the tube (well 2\" in diameter weighing about 4 and 6 lb.). I took a couple more images that night I haven\'t processed. Don\'t know when those branches fell. Seeing was very variable going from great to lousy and back again. It was fair to lousy for this one. I did take 4 color frames for each color. All were poor. I chose be best two for each color as including more just made things worse, not better. I took 6 luminosity frames but had to throw out two due to the seeing getting very bad. This is another on the reshoot list I suppose. 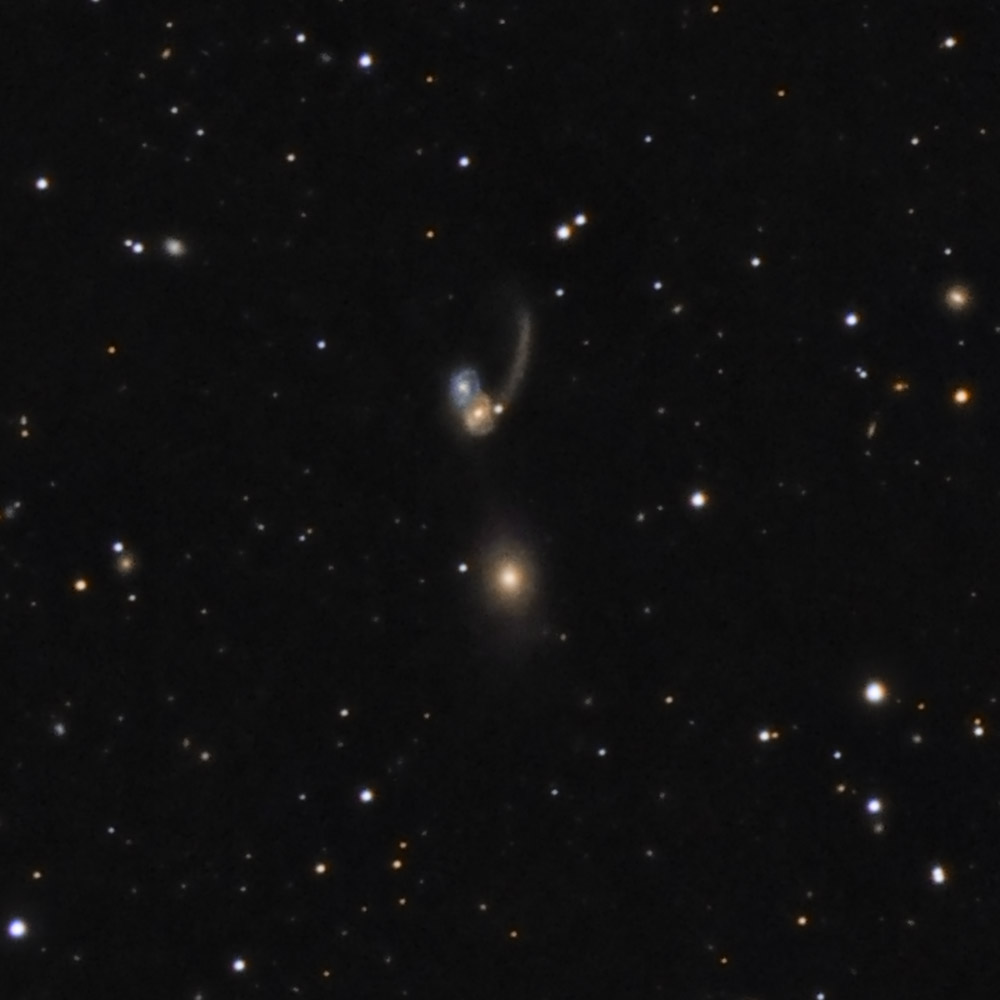 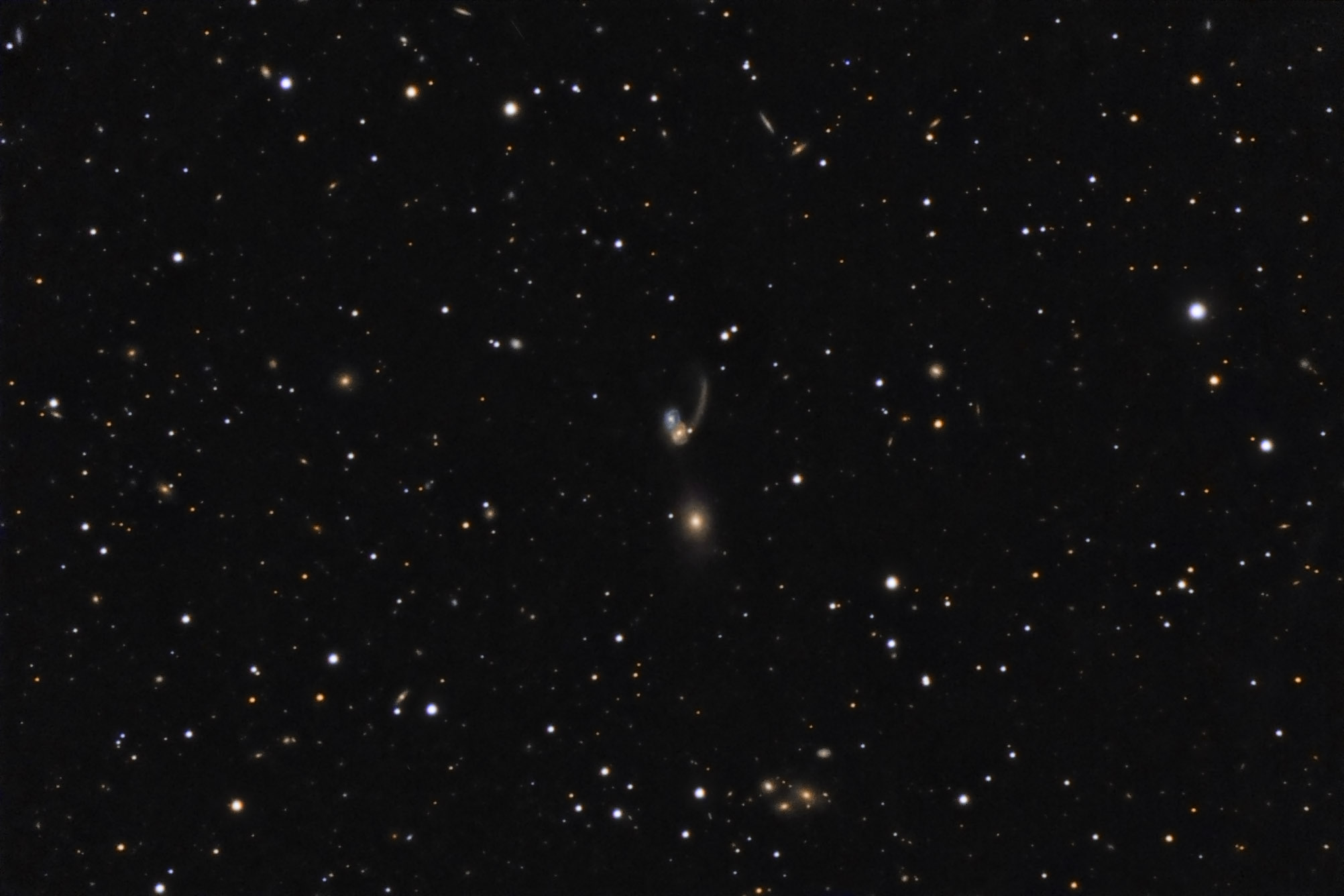