This image was taken under poor conditions as I was imaging through haze or light fog. This caused some very nasty halos around the brighter stars. I reduced them somewhat. The haze reduced my ability to go deep. But seeing was pretty good and that was needed for this one.

Arp 195 is in Arp\'s category \"Galaxies (not classifiable as E or S): Material ejected from nuclei. Also known as UGC 04653, it is a triple galaxy system in which the northernmost has one heck of a tidal plume though Arp seems to consider this as something the nucleus ejected from his classification. To me, it looks little different from the plume in Arp 190 which he classed as a narrow filament. Why the difference escapes me. In the case of both, the likely source galaxy is rather red but the plume is either less red (Arp 190) or slightly blue in the case of Arp 195. Arp makes the following note in his catalog: \"absorption edge on connection to nucleus\". I still don\'t know what this refers to. There does seem to be a dark absorption lane between the upper two galaxies. This might be it. These galaxies are very distant, about 750 million light years. So getting much detail with my typical seeing isn\'t easy. The middle galaxy hosted a super nova recently, SN 2008bv. It blew early in 2008 and this image was taken nearly a year later in the middle of January 2009 so I missed it. It had faded from view months earlier. NED classes the southern galaxy as SBb, but the other two are left unclassified. The triplet is located in southern Lynx.

This would be a good time to bring up Arp\'s idea of galaxies ejecting objects. It would seem the classification of this object and others in his \"material ejected from Nuclei\" class fit this idea. To him many, if not all, quasars are relatively near by objects ejected from galaxies rather than black holes at the core of very distant galaxies. To make this idea work he has to explain red shift as something other than a distance indicator. Something he\'s never really managed. Also we see absorption lines in quasar spectra that come from the vast interstellar media between us and the quasar. When the light passes through several galaxy clusters at various distances we see these lines with the right red shift to match that of those clusters indicating the object is beyond these clusters and not nearby. Virtually no one accepts Arp\'s idea about ejected quasars nor that the plumes seen in galaxies of this class are due to ejected material. It is well agreed they are tidal plumes just like others he does seem to recognize as falling into this classification. Though he even describes these in terms that are rather ambiguous like \"diffuse counter tails\", \"narrow counter-tails\" and \"narrow filaments\". While others he fits into the ejected class by calling what others would call narrow tidal features, \"jets\". One of which likely doesn\'t even exist. You have to consider his classification scheme in light of this ejecta belief. True galaxies do eject matter. Black holes in the cores, when active, emit strong jets of electrons and maybe other particles that radio telescopes see as huge plumes, a very few of which are seen in visible light such as the black hole generated jet in M87. Also massive star formation can create solar winds of such intensity they can carry matter in the form of gas and dust out of a galaxy. M82 would be an example of this. But massive objects, that is very rare. A run-away star ejected when its companion blows itself to bits in a super nova explosion may happen but these are rare random events not capable of making a jet. Most of Arp\'s jets are due to tidal interaction that can create \"beads on a string\" effects as mentioned in a previous post. I\'ll have more of these in the future when I get them processed. But in 1966 they did seem to be jets, at least to Arp. Arp\'s catalog is fascinating but some of his ideas are rather out there in left field, assuming space has a left field. Still they force astronomers to better support the current models and that\'s always a good thing.

NW of Arp 195 is a small galaxy of magnitude 21.1. It is SDSS J085329.60+351242.4 and is nearly 4.5 billion light-years away. It is also listed as a radio source. I have little resolution on it but it looks oddly shaped as if it could be two interacting galaxies. I wouldn\'t normally suggest that but being a radio source means it has a lot of activity going on, maybe just an energetic AGN at the core or maybe a collision. I\'m surprised I was able to get it through the haze layer. Normally my background is about 300 ADU. For this image, it was 2900 thanks to the haze or light fog. I figured 20th magnitude would be my limit.

Below and a bit west of the above galaxy are two more that don\'t appear all that different on my image. The upper one is a bit redder and a bit smaller and dimmer but not by much. Yet that slightly redder and dimmer one is 2.2 billion light years away compared to only about a quarter billion for the one below it. Obviously, you can\'t expect galaxies to all be average size and brightness.

I\'ve been asked for more annotated images so I\'ve made one for this image. It just shows the distance to the various galaxies and one quasar in the image. I find it interesting that the most distant galaxy is further away than the quasar. All labels are directly west (right) of the galaxy or quasar they refer to. A few times there was a second galaxy that forced me to lower the label a bit so not to overwrite this other galaxy. That put the label below the unlabeled one. Oddly, when this happened the second galaxy never had any redshift data, even if it was brighter. This happened with quite a few pairs in the image, not just those that got in the way of my labeling. In fact, only one pair had redshift data and they turned out to have almost exactly the same redshift. Notice there\'s a group around 1.6 light years. NED lists a possible galaxy cluster, NSC J085511+350146, with a photographic redshift of about 1.9 billion light years in the lower left of my image. The label goes through the center coordinates. I see nothing there. South of it there are some faint galaxies, right in the SE corner of my image. Looking at the SDSS data for the area I see no jump in the galaxy count around the given coordinates either. But the label is there. 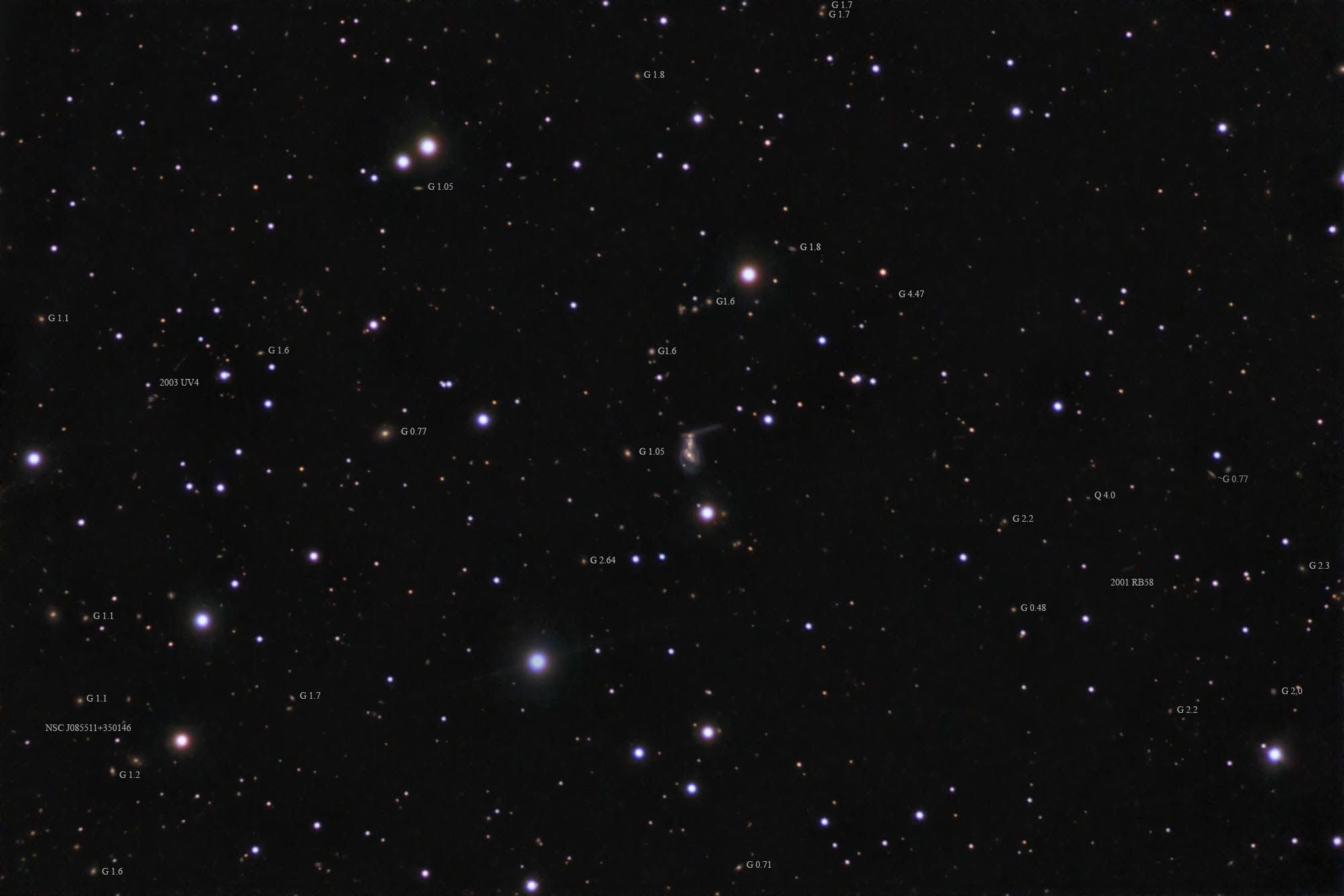 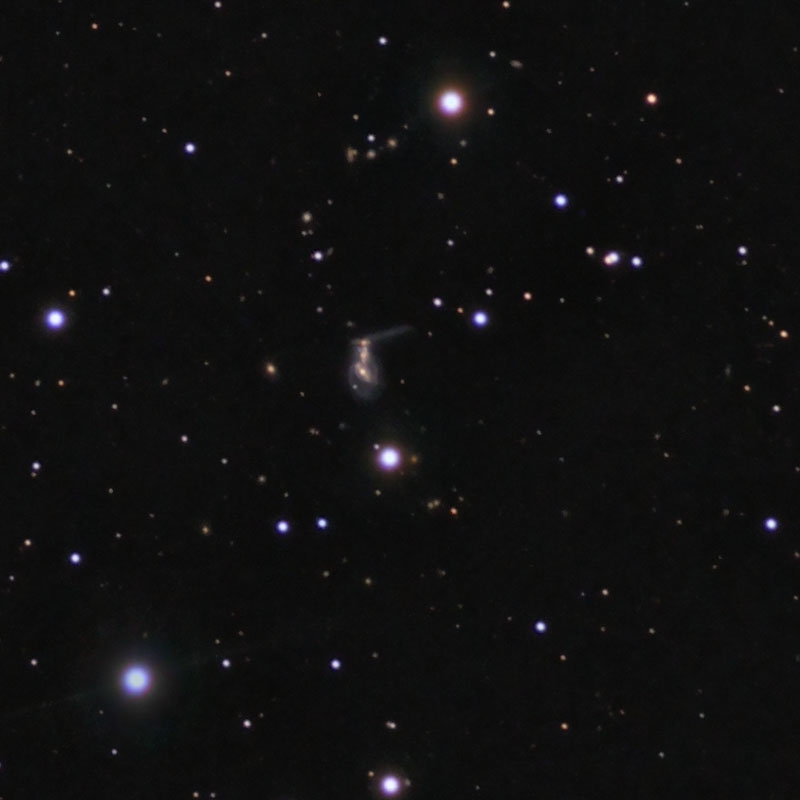 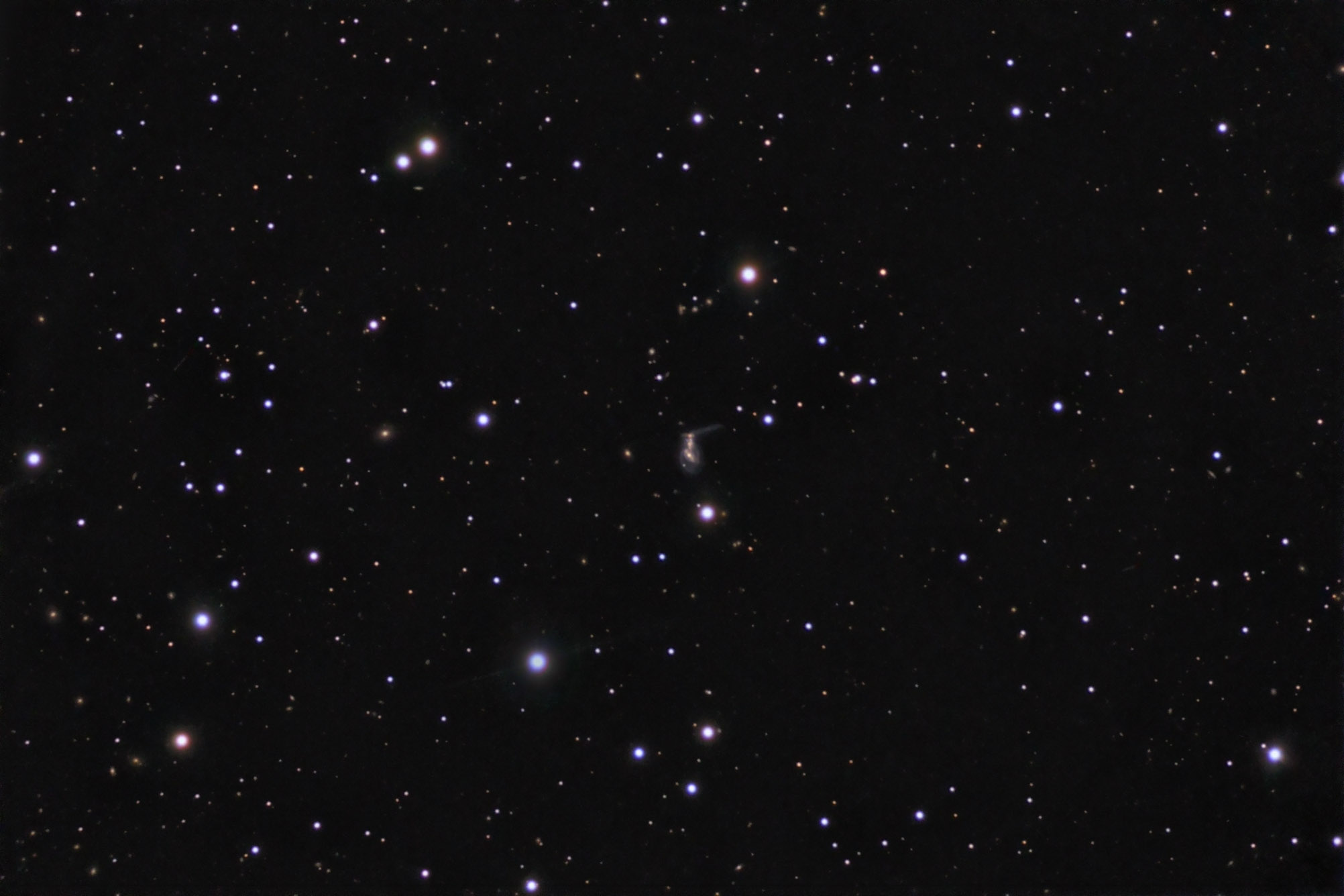