Arp was a very careful observer at the time of his Atlas but he missed seeing this one correctly. As his work on the atlas progressed he slowly developed some very strange ideas about galaxies emitting objects, such as quasars. At first, he seemed to use this category in a purely descriptive way. Meaning it looked like the galaxy\'s core had emitted something but not that it really did. Later he seemed to decide it was possible they did. Was this entry an influence in this direction?

Arp 198 is one Arp misunderstood. He classed it under \"Galaxies: Material ejected from Nuclei.\" His note indicates he saw this one as a spiral with a huge spike when he says; \"Spike points toward small nucleus; no spectra available [subsequently determined redshifts were consistent].\" In fact, this is two separate galaxies, both spirals, one face on that is in front of an edge on spiral hiding much of the eastern side of the core (which is visible in the POSS 2 near IR plate). I would have thought this rather obvious even in monochromatic images. Apparently not. Today\'s color images, like mine, make this very obvious.

I see no indication these are interacting. I find only one redshift listed for the face on spiral which is the 414 million light-year figure. The same source puts the edge on at 415 but the Sloan survey says 420 million light-years. In any case, these support the idea the face on is well in front of the edge on. While they are members of the same group they aren\'t interacting. They may in the future depending on their relative motion.

On the eastern edge of my image is NGC 3487/UGC 6092 (discovered by Lewis Swift on March 5, 1886) at the same distance as Arp 198. It forms a pair with UGC 6092a a bit further east according to the CGCG catalog. A note says that this pair forms a triplet with Arp 198. Oddly the CGCG catalog considers Arp 198 as a pair of galaxies. So shouldn\'t they say a quadruplet? Or does that note date back to Arp\'s time when he may have thought Arp 198 as one galaxy?

Many other interesting galaxies lack redshift data in this image that I\'d like to know about. This is the best NED can do however.

There are three asteroids in the image that survived processing. A fourth was seen on the FITS but once color data was added was extremely hard to see. I cheated and increased its brightness some. The asteroids are:

Asteroids get a number after being recovered after having a good orbital determination for one full orbit. Thus three of these have yet to complete one orbit since discovery.

I had two nasty spikes caused by something on my filters. The lower one was both on the luminance and red filters while the upper right one was only on the luminance filters and faded over the course of the 4 frames. Apparently this was a light fog of some sort on the filters that was very localized. Never saw it like this before, especially on two filters exactly the same. That is very weird. I didn\'t try to process this out as when I have in the past it has looked worse than leaving them in. I did tone down the red color of that spike however. 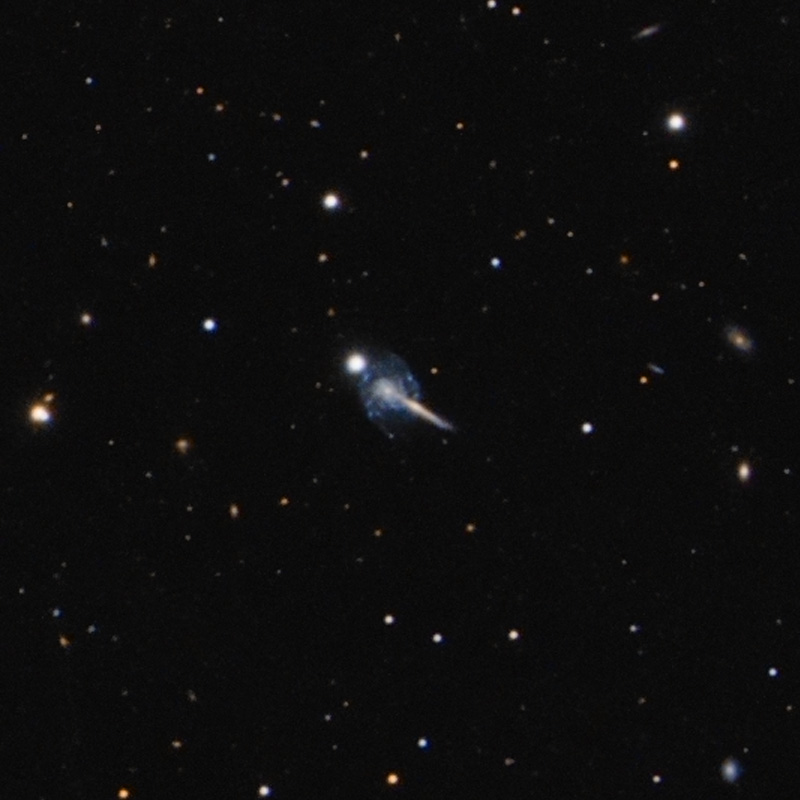 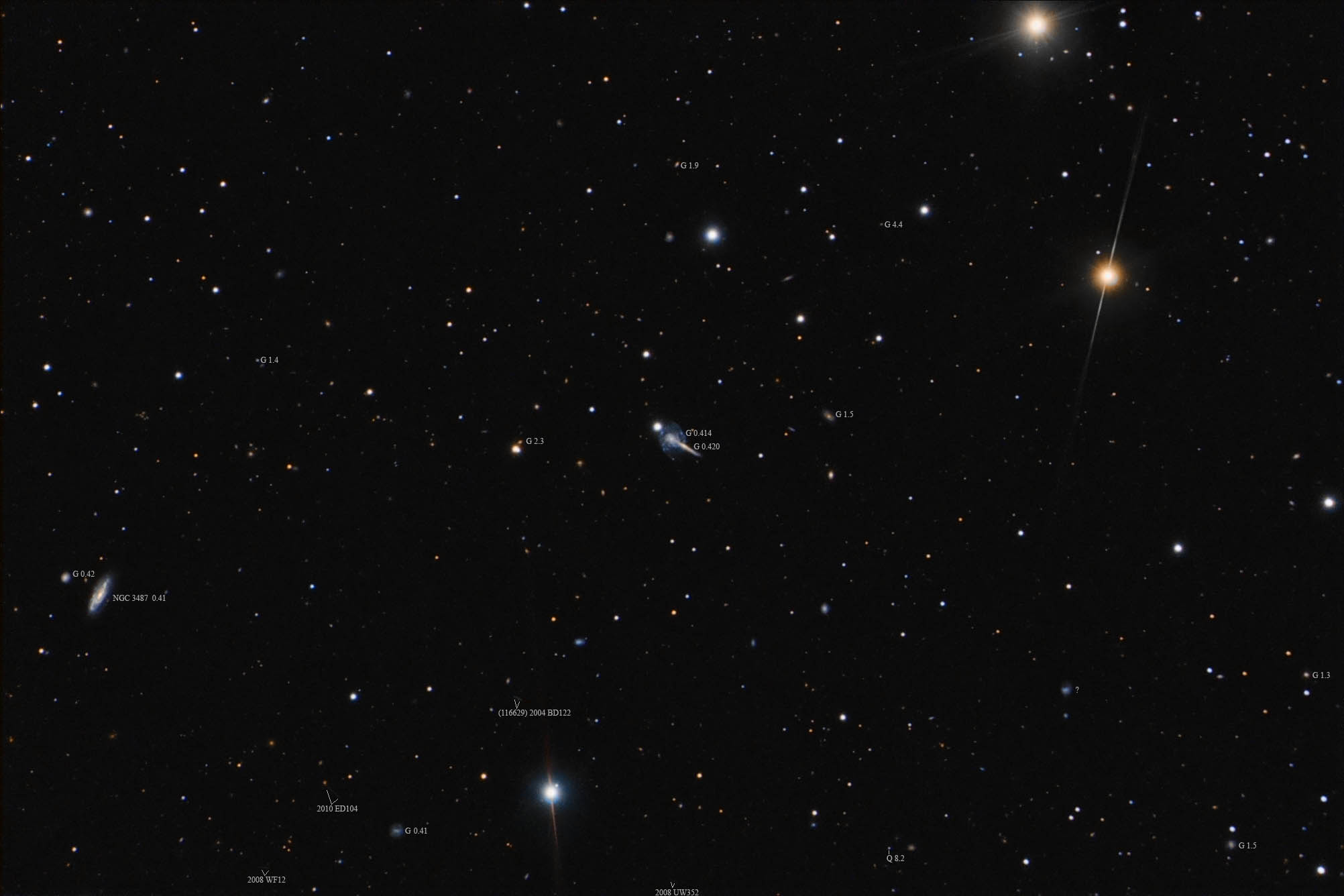 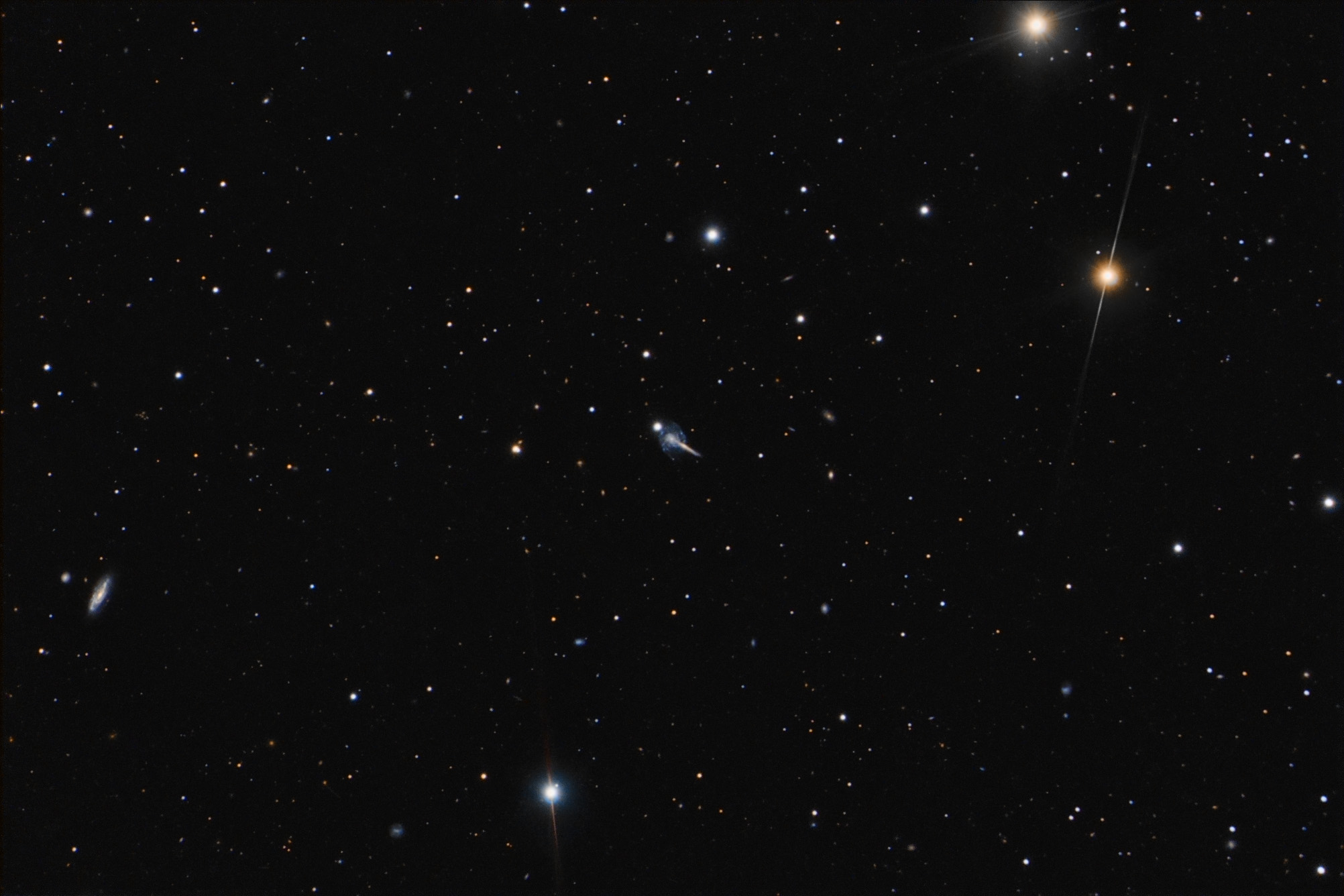