Arp 199 is a pair of apparently interacting galaxies in Bootes about 150 million light-years distant. The pair consists of NGC 5544 and NGC 5545 right (west) to left (east). Arp\'s classed them under his very odd category of \"Material Ejected from Nuclei\". While that may apply to Arp 337 (M82) he didn\'t put it in this category. I have no idea what he meant as the ejected material. The entire NGC 5545? His comment would say otherwise: \"Spirals appear disturbed\".

NGC 5544 looks like a barred spiral with an inner ring connected to the bar and a nearly equally bright outer ring not connected to the bar. Other than the double ring it doesn\'t appear all that disturbed to me though parts of it are hidden behind the obviously closer NGC 5545. NED classes it as (R)SB(rs)0/a. The NGC Project disagrees saying it is an ordinary Sa spiral with no bar. Sure looks like a bar to me.

NGC 5545 appears to be a somewhat disturbed spiral. NED classes it SA(s)bc while the NGC Project say Sb-c using its simpler system. At least they agree on this one. Redshift puts NGC 5545 slightly further away which can\'t be correct since it is hiding part of NGC 5544 which is slightly closer by redshift alone. The difference is due to both measuring accuracy and relative velocity. Thus NGC 5544 is moving toward NGC 5545 so the collision, if there is one, is still in the future. What we can\'t measure is the lateral velocity. It could be that NGC 5545 will have moved to the side by the time NGC 5544 gets to its distance.

The other NGC galaxy is NGC 5557 in the lower left of my image. Its distance by redshift is slightly greater than Arp 199. Still, it is quite likely they are part of the same group of galaxies. The NGC project classes it simply as E. It certainly is an elliptical. NED calls it E1 and a note at NED says it is classic E2. These classifications would indicate it is slightly elongated which it appears to be in my image.

In making the annotated image I accidentally ran across three galaxies not in NED\'s database even though many far fainter and smaller galaxies were included. Two of the three are very blue which seems to often be the case. Some systematic error must be at play here. The three are marked by a question mark. I didn\'t search for others so likely there are more in the image.

In a previous post, I mentioned a faint glow to the northeast of Arp 199. In this higher resolution image thanks to better seeing it is still there but much fainter. Most of the glow has now broken up into many very faint galaxies that seeing blended together. I\'m going to guess the remaining glow is due to even fainter background galaxies though no cluster is shown at its position.

There\'s an asteroid in the image, (26383) 1999 MA2, that gives away the order of my frames as at magnitude 17.1 the color frames were strong enough to color the background sky. The lost blue frame shows up as a gap between the end of the green frames and first blue frame. The added blue frame, mostly after moonrise, follows the luminance trail. 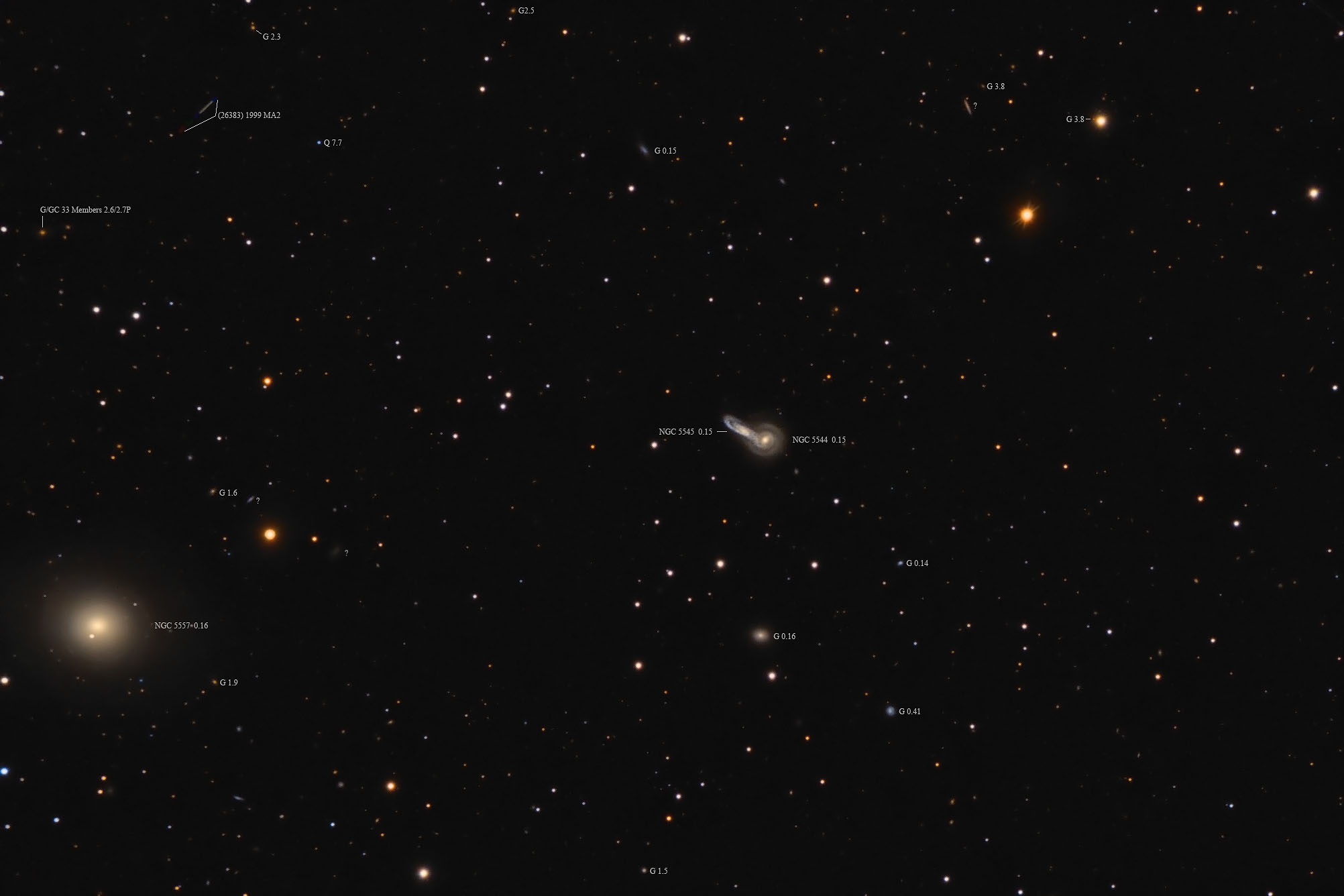 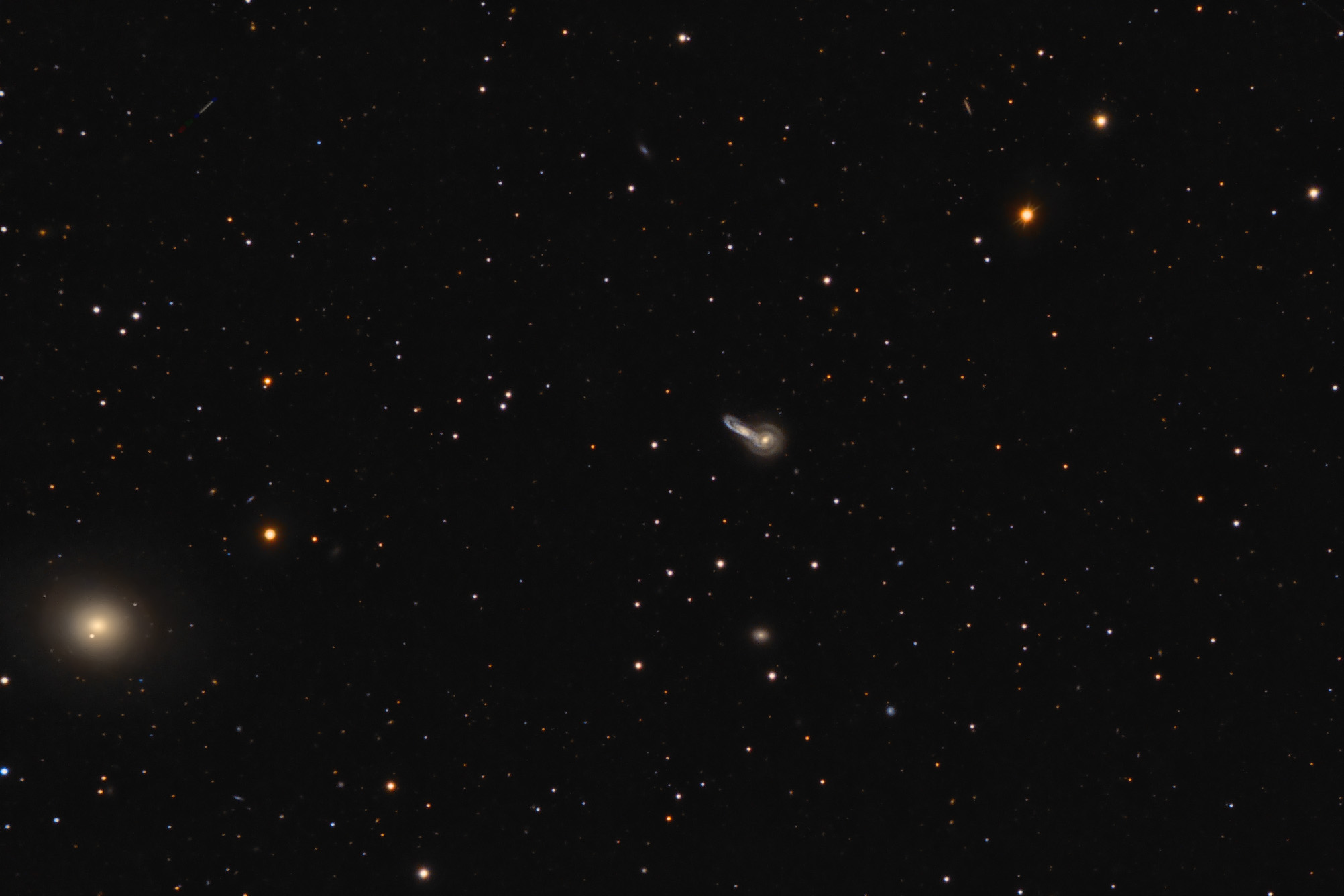 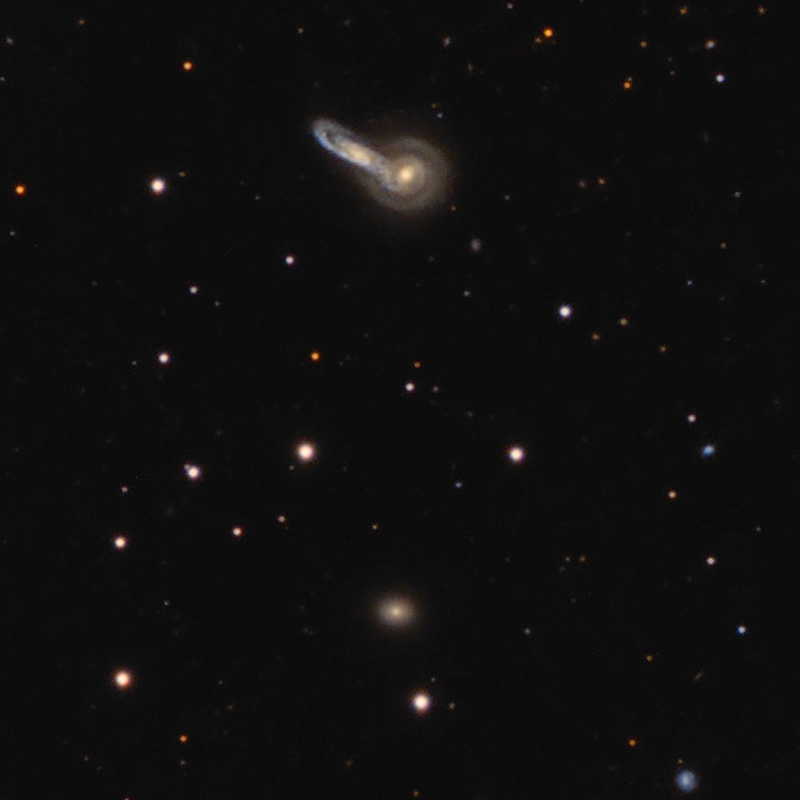