Arp 201/UGC 224 is a pair of galaxies located about 824 to 830 million light years distant (depending on which redshift value you use) and is located in the constellation of Pisces near its border with Cetus. The pair are usually considered as interacting. Arp\'s note reads: \"VV connection between galaxies not seen here or on Survey prints.\" I can\'t see a connection on my image either. However, a 1986 note at NED reads: \"Interacting pair of E (south) and S0 (north) galaxies. Faint matter is ejected northward from the latter.\" Is it this \"faint matter\" that caught Arp\'s eye? He has it classed under galaxies with matter ejected from nuclei. The note\'s authors consider these stars, dust and gas as being ejected by some force from the northern galaxy. More likely it is some sort of tidal plume and could have come from either galaxy. It is quite a bit bluer than either galaxy. That would indicate that mostly dust and gas was pulled from one of the galaxies and has formed into new stars since the plume was created. It could be a third galaxy hiding behind the other two. In fact, I\'m leaning to that idea.

Kanipe and Webb see the three patches of light that come out of the southern galaxy\'s southeast side and go south as the ejected material. These are clearly background galaxies. Though in Arp\'s image they are just faint smudges. Same in mine though I only pick up the two brighter ones with a hint of the fainter one closest to the southern galaxy. I suppose it is possible this is what Arp referred to but without more to go on I vote for the northern galaxy\'s blue plume or third galaxy. It may even come from the southern galaxy I\'ve included a DR8 release image of this object. Note the two brighter background galaxies in Kanipe\'s and Webb\'s opinion that are the ejected material are quite different colors with the northern reddish while the southern is slightly blue. Neither were strong enough for me to get sufficient color data so they appear white in my image. NED identifies the two brightest as SDSS J002338.56-003049.9 (north) and SDSS J002338.71-003059.7 (south). The faint northernmost object isn\'t listed in NED at all though one not seen in Arp\'s image but faintly visible in the SDSS image is. Therefore I think it a faint foreground star. It appears starlike in both the Arp and the SDSS images.

None of this means Arp didn\'t think these objects were ejected from the southern galaxy. He held, and still holds I believe, that quasars are ejected from active galaxies. So he could see these two galaxies and a star as objects ejected from the galaxy. In any case, the blue feature above the northern galaxy is what makes this one interesting to me.

While the note indicates the southern galaxy is an elliptical and the northern S0, NED abstains from classifying them at all. To me, I\'d say the notes classifications appear reasonable.

As mentioned, Arp considered quasars as being emitted from active galaxies. Several going out to nearly 11 billion light-years are in the image as well as some Ultraviolet Excess objects that are likely quasars. Unfortunately for Arp\'s theory, their redshifts are wrong. His weird idea is that whatever it is a galaxy ejects that we call a quasar, it\'s redshift increases with time. Thus, if it is close to the galaxy it was released recently and has a low redshift while those further out have higher redshifts. Since we can\'t see in 3D how we are to determine which are close to it I don\'t know. The example Kanipe and Webb gives seems to rely on simple 2D angular distance which makes no sense to me. Maybe I\'m missing something. In any case using 2D distances, the redshifts appear rather random in this image. Many more are just off the edges of my image in all directions. They too have a similar random spread of redshift values.

Several galaxy clusters are found in the image. The one marked GC 3.0 is an estimated 3 billion light years distant and has some 40 galaxies within a radius of 2.15 minutes of arc. The label is placed at the center coordinate. In the past, with an annotated image I labeled galaxies with a G, quasars with a Q etc. Recently I\'ve received complaints that they couldn\'t find what a \"G 0.35\" was in any catalog. For this one, if it is a galaxy only the distance in billions of light years is noted. Some objects NED lists both as a quasar and an Ultraviolet Excess Source (UvES). In some cases, it lists the quasar designation first and other UvES first. I assume this is due to positional differences of a fraction of a second of arc rather than a preference. I think it safe to consider them quasars, even those only listed as UvES. In any case, if both were used I show both in the order NED listed them.

The annotated image shows only two galaxies closer than the Arp 201 group. I say group since two other galaxies in the image are at a similar redshift distance so it is likely that all 4 are related. Other than these 6 galaxies, everything else NED had a redshift value for, are over a billion light years distant (other than the 4 asteroids of course). Oddly, all 4 asteroids are bunched in the lower left quadrant.

After I wrote the above Jeff Kanipe sent me an image from the VV catalog that appears to show a connection between the two galaxies and is likely the cause for Arp\'s comment. Comparing the image to the POSS 1 plates it appears if you enhance greatly certain pixels in that digitized image you get exactly the same \"connection\". To do this you have to not similarly enhance other pixels of these values over the image. I tried taking many deep images in H alpha, blue and red light, far deeper than the POSS 1 plates and failed to see even a hint of this connection. I enhanced them every which way but no such connection appeared. I think the VV image may be due to overactive processing of grain in the POSS 1 plates. I\'ve attached the VV image Jeff sent me so you can do your own comparison. Note the connection is brighter in this image than the plume both Arp and I imaged. It does, if real, indicate this plume comes from the southern galaxy. But why the SDSS, Arp nor I or any other image I found show this \"brighter\" feature? Could it be polarized? That I couldn\'t test. I have no information on the particulars of the VV image. 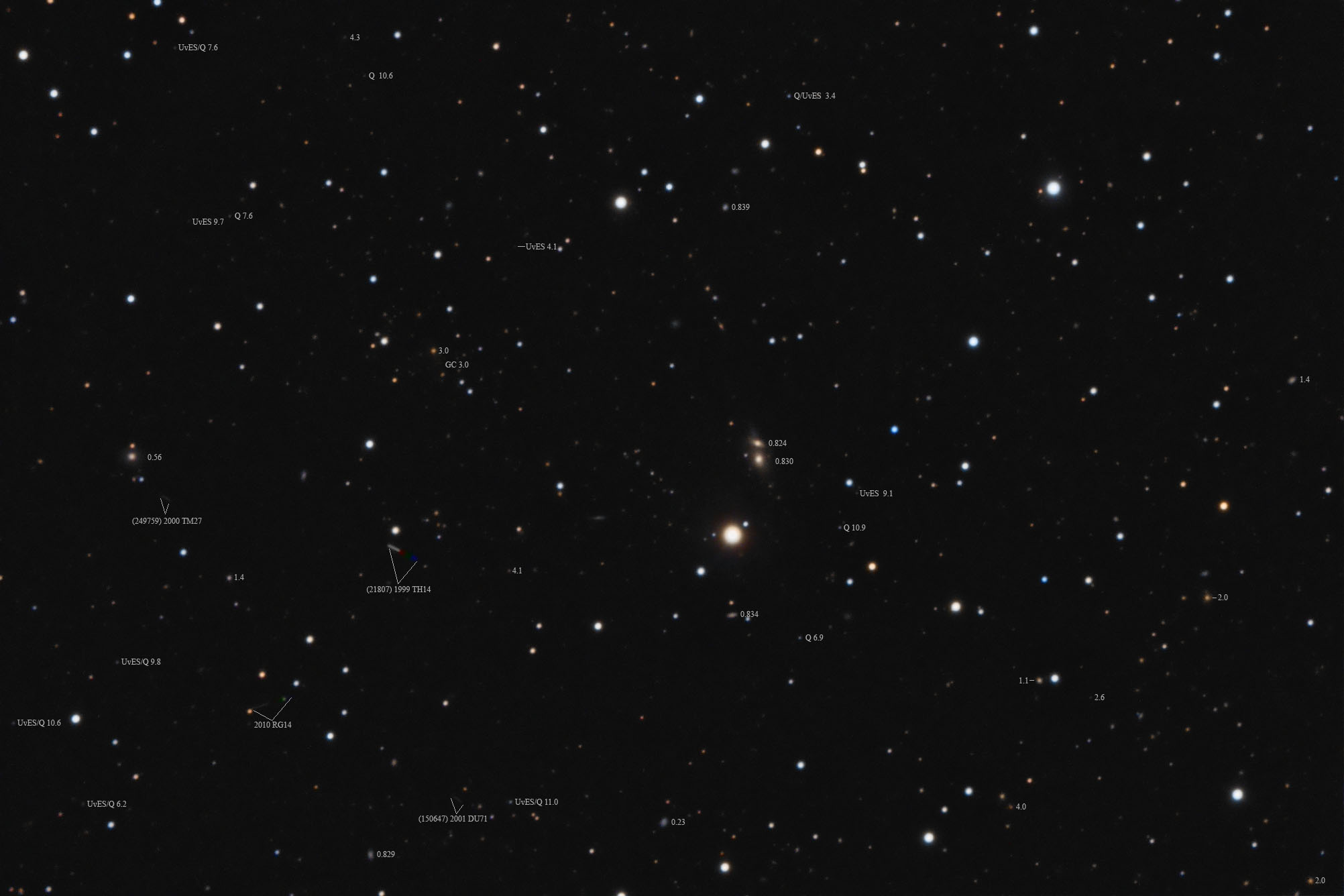 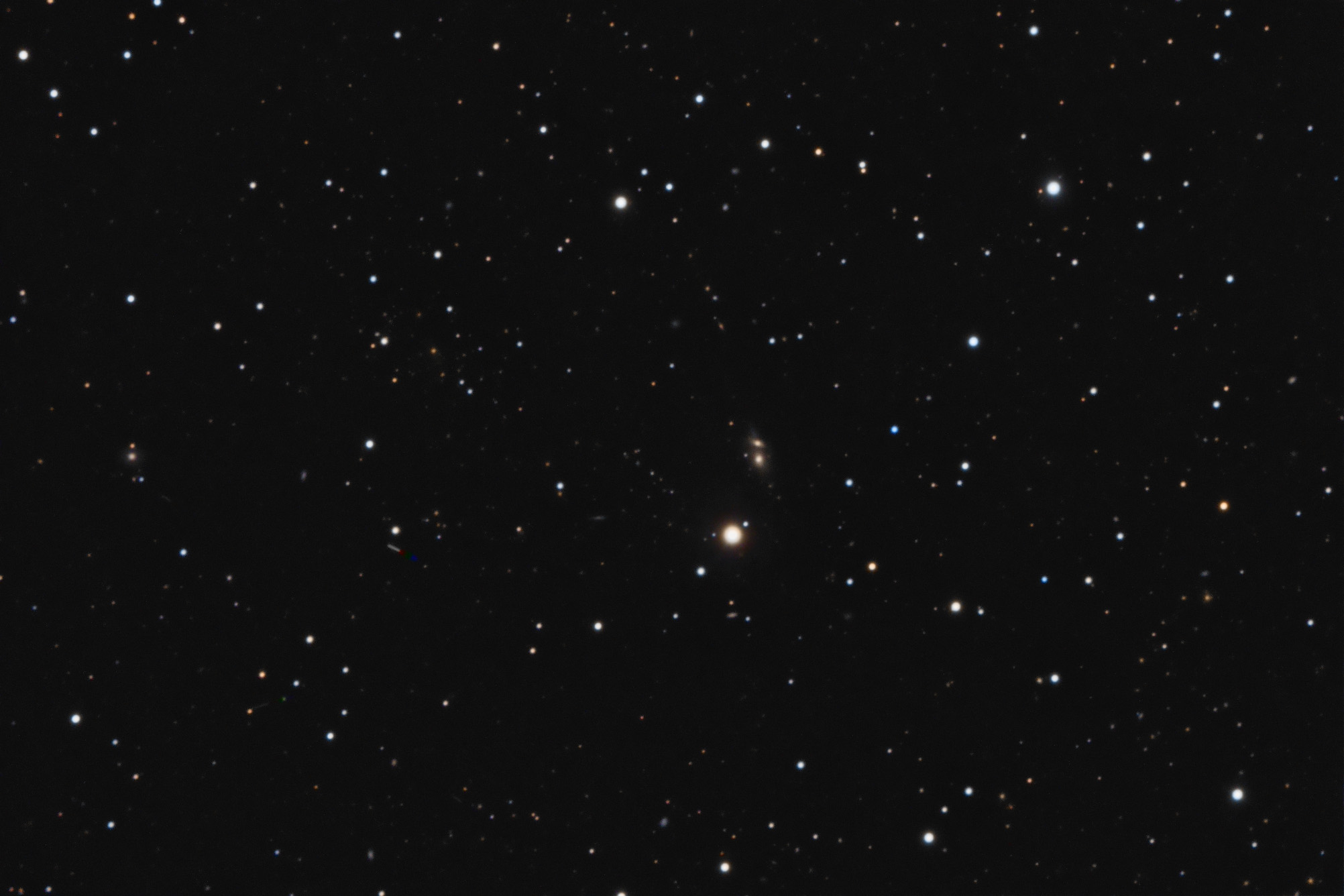 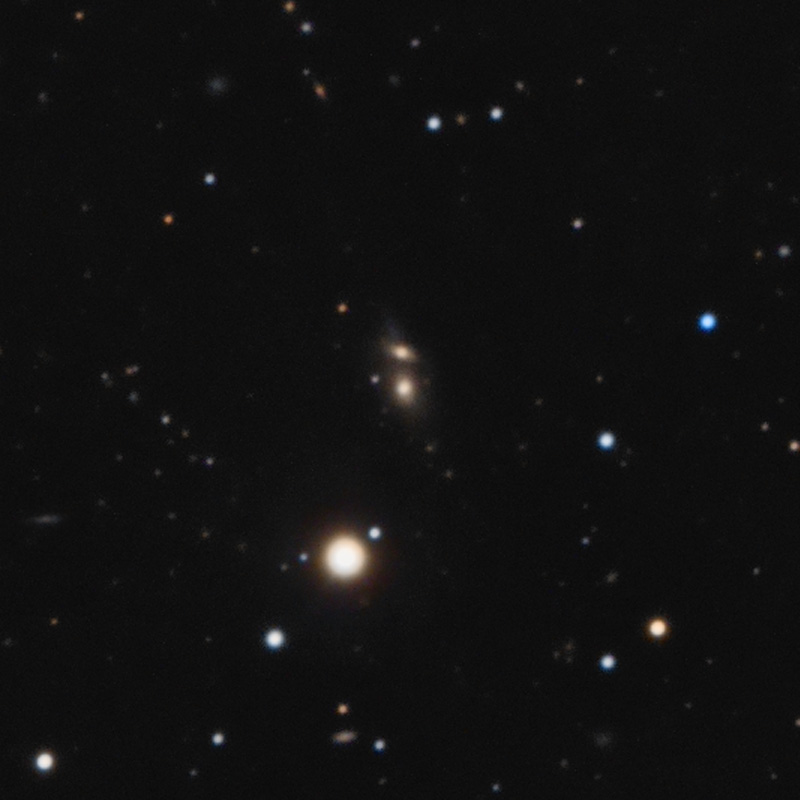