Arp 202 is a pair of interacting galaxies about 150 million light-years from us in southern Lynx. Arp classed them under Galaxies not classifiable as E or S; Material ejected from nuclei. I\'m not sure what \"material\" he is referring to. He comments; \"Faint tail from small galaxy\". I don\'t know if this refers to the faint fuzz at the west end of it or the three objects that trail to the west. The first is just a star, at least it isn\'t in the SDSS. The other two are separate galaxies per the SDSS though no redshift is provided. To me, they appear far distant galaxies though the Kanipe-Webb book considers this the tail. I see no difference between these two and a third galaxy directly below the eastern (middle of the three objects) galaxy. Arp became obsessed with the idea of galaxies ejecting objects and it appears his opinion of this pair may have colored by this concept. A note at NED says; \"Faint fragments to east of smaller object.\" Seems no one really knows what Arp was referring to.

Arp 202 is composed of two galaxies NGC 2719 and 2719A. Both are classed as Im pec. The third major galaxy in the image is the nice two arm spiral, NGC 2724, SAB(s)c, with a redshift that puts it about 5 million light-years further away than Arp 202. Such a difference is immaterial so it is considered a member of the same group as Arp 202. There are two small galaxies to its right. The red one has a redshift indicating a distance of a bit over 1.4 billion light-years. Oddly, the blue spiral above it isn\'t in the NED SDSS database. It has hundreds of far fainter galaxies in this field but not this rather bright one. Nor could I find any entry for it at NED or SIMBAD.

I\'ve made an annotated image with the distances in billions of light-years noted. Several other galaxies and a quasar are in the image that are also noted on this image beside these I\'ve mentioned. The interesting thing is that one of the galaxies is actually more distant, not by much, than one of the quasars in the image. Both are over 3 billion light years distant. But the quasar at 8.4 billion light years is a lot further away. Of course, Arp likely wouldn\'t agree and might say they were emitted by Arp 202 rather recently. The most distant quasar in the image is also the brightest. This Arp would jump on instantly. Its redshift puts it at 11.65 billion light-years away. The photons I captured have traveled more than twice the age of our solar system and possibly longer than our galaxy even existed. In fact, the light left when the universe was only about 2 billion years old. It boggles the mind to think about.

One of the distant galaxies I\'ve noted but not mentioned yet is SDSS J090107.85+353657.1 at 1.8 billion light-years near the bottom of the image. It is a 22nd magnitude galaxy hiding behind a much brighter star. You may have to enlarge the image to see that there are two objects there. The galaxy is sticking out of the western side of the star. Nearby to the NW is SDSS J090121.47+353908.0 at 1.6 billion light years that appears to be a blue star. But the magnitude and position exactly match a galaxy in the SDSS so I assume it is correct. Also, the PSF (how the light varies across the object) is typical of a galaxy and very atypical of the known stars in this part of the image. So appearances can be deceiving.

The Sloan Digital Sky Survey image of Arp 202 is at:
http://astronomerica.awardspace.com/SDSS-18/NGC2719.php

The SDSS image for NGC 2724:
http://astronomerica.awardspace.com/SDSS-18/NGC2724.php
Their filters don\'t show the color difference between the two galaxies on its western side that my image shows. They use a different mix of filters that does alter the color balance from what the eye would see if it could see such faint color. This helps greatly in their scientific analysis but does make for sometimes misleading images. Other times the color is reasonably correct. I\'ve not determined why the variation. 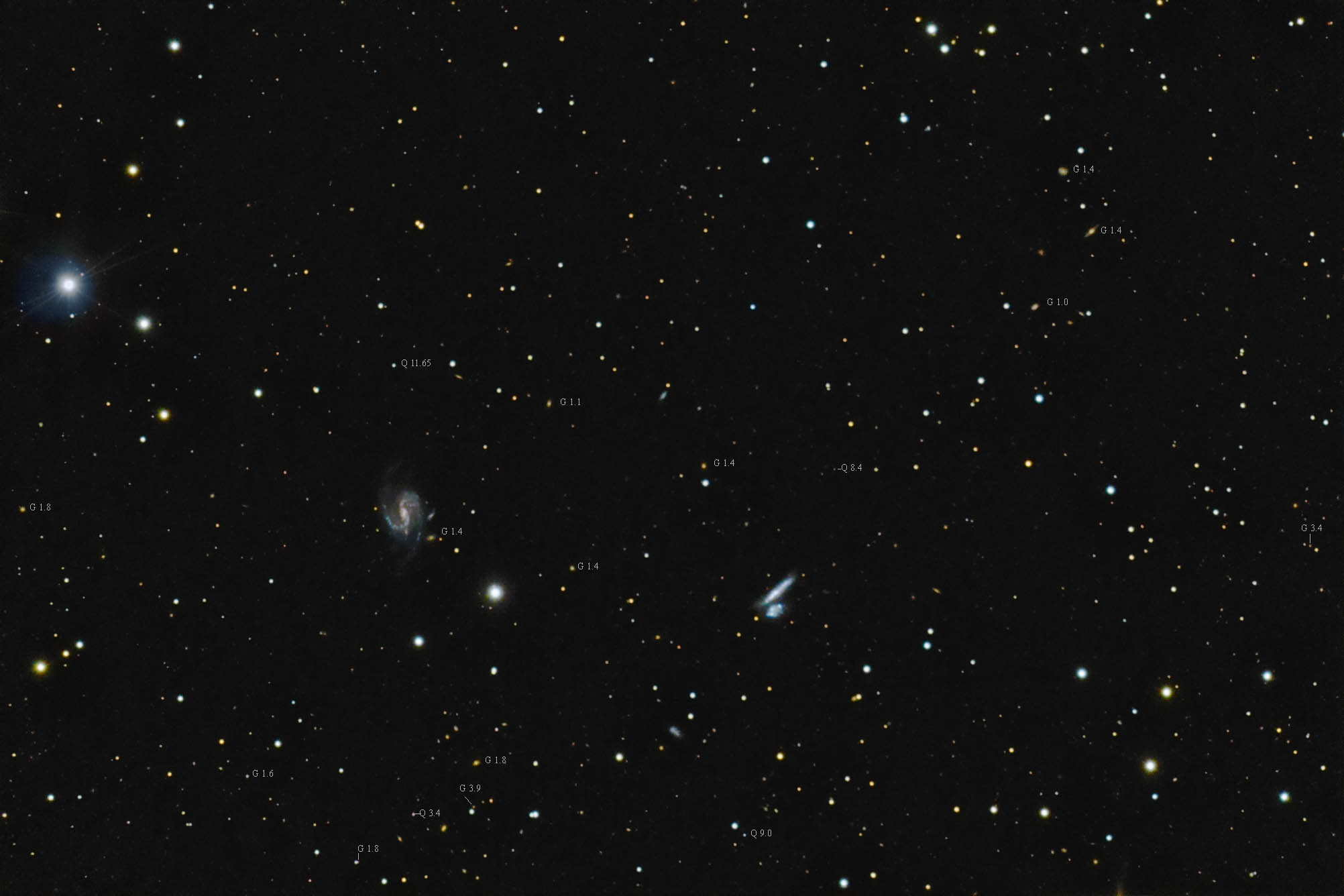 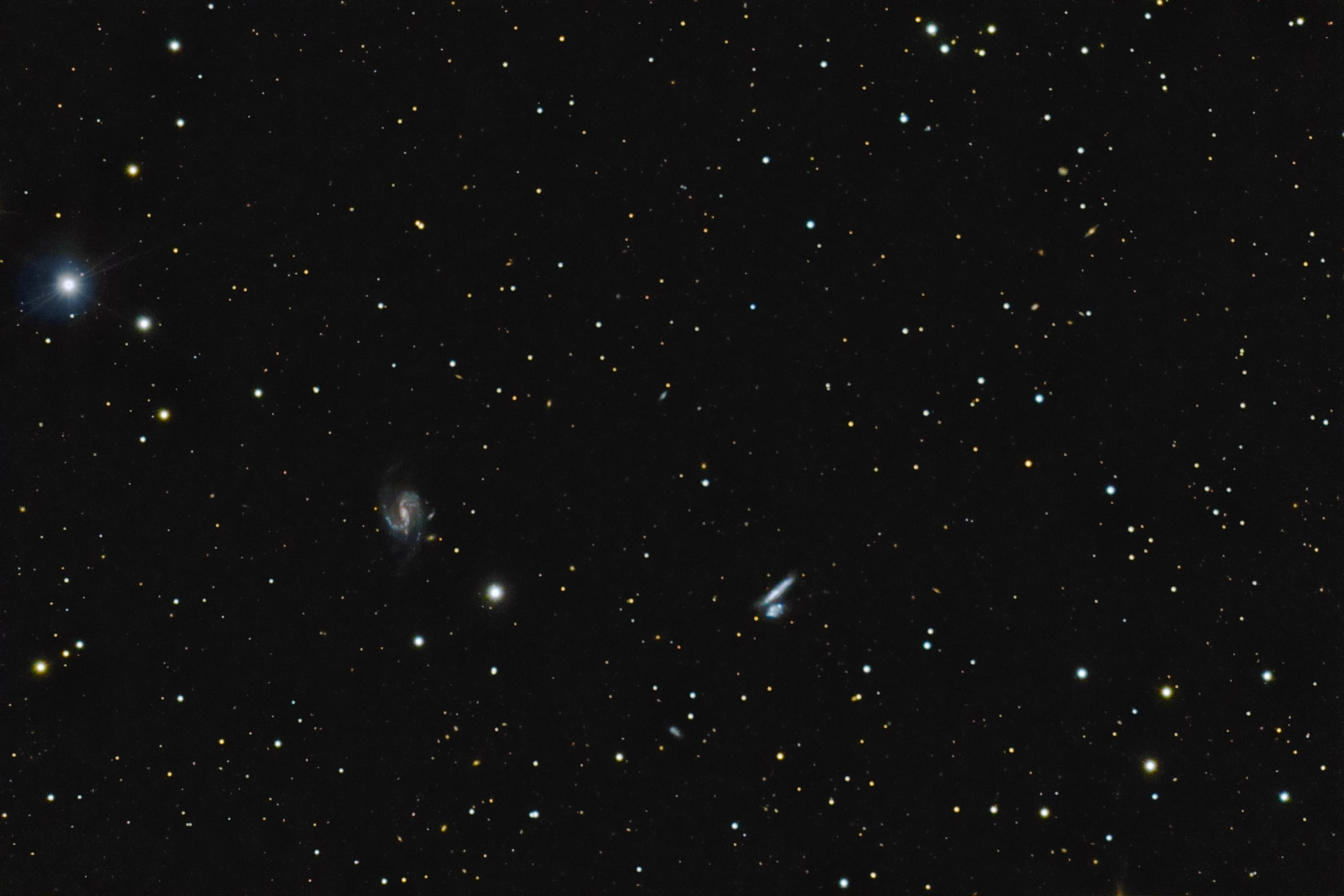